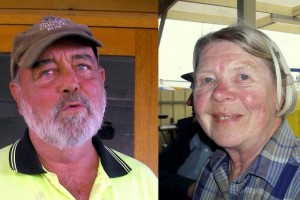 John and Inara are South Australian’s who have sailed their 35′ steel ketch Desiree all around Australia.

More importantly for us here, they have explored every inch of both gulfs of South Australia over many years.

Over the years much has been written about Boston Bay (Pt Lincoln) and the Sir Joseph Banks Group.  What is often forgotten for the non marina dwellers is good anchorages in northern gales, which are sadly lacking in Spencer Gulf.

The two best are the northern end of Boston Bay, up past North Shields (when the wind changes you simply move back to the anchorage near the town jetty) and Peake Bay which is a great hidey hole for those spending time at the Banks Group.  Tucked in behind Cape Bolingbroke and the Bolingbroke Reef, Peake Bay is a little over 2 hours from the lagoon at Reevesby Island, and provides shelter from almost all directions.  Even in 35 kt northerlies we have fished (successfully) for whiting from the dinghy!

Moreton Bay at the northern end of Reevesby Island is a good jumping off point for the journey north.  Cruisers are generally in favor of shorter  legs and many will choose to stop over at Port Neill rather than going straight through to Cowell (over 60 nm).

Pt Neill provides shelter in winds from SE all the way to NW, although it can be a little rolley if the swell is up. My preferred anchorage in SE to SW is between the jetty and a small breakwater that shelters the boat launching ramp.  The town provides all you would expect in a seaside country town, and a pleasant stroll is enjoyable.

We generally bypass Arno Bay. While the local yacht club is very friendly, anchorage is generally rolley, and the small marina quite tricky to enter without local knowledge.

Cowell (Franklin Harbour) is normally our next stop.  For the more adventurous, there are several anchorages near the entrance, but most elect to proceed to the town and anchor a few metres north of the jetty where the holding is excellent.  The town provides all necessities, with the exception of fuel, which is quite a hike, but you can build up strength by sampling their famous local oysters. There is a supermarket, great butchery and even a Laundromat. Often we do a fair amount of shopping at Cowell, as it is much more convenient than Whyalla.

Cowell to Whyalla is about 60 nm. There is some shelter behind Shoalwater Point in SSW, but by far the best anchorage on that stretch of coast is known as the Horseshoe, and is an obvious feature on the chart, about 5 nm north of the obelisk at Plank Point.

In years gone by Whyalla was not much visited by cruisers on their way north.  Over about the last 4 years or so, the red dust problem from the steelworks has dramatically decreased.  Excellent value meals at the Club Friday nights.

Heading north from Whyalla anchorage can be found either in Fitzgerald Bay in S-W, or behind Ward Spit in SW-NE.  The Ward Spit anchorage, at the eastern end, is an obvious feature on the  electronic charts are fairly.

Once past Two Hummock Point there are a number of anchorages, but most require care and local knowledge.  The best is Blanche Harbour, where both north and south entrances are clear from the chart.  We have found that electronic charts are fairly accurate here, but must be used in conjunction with the Mk 1 eyeball.  Blanche Harbour is a good spot to overnight, waiting to ride the tide into Port Augusta.

Port Augusta has all the features that cruising yachties long for. There is good holding on anchor opposite the yacht club, and a pontoon to moor alongside at the southern end of the wharf.  By contacting the yacht club, shower facilities can be made available, but here is the reason we love Port Augusta. Big W 175 metres, Liquorland 200 m, Woolworths 200 m, Service station for fuel 300 m, and 250 m start of the main street, with bakeries, cafes, restaurants, pubs, etc.  Everything is just so convenient!  There are also many local tourism options available.

But it’s not just the destination, it’s the journey.  Going up the Gulf there are the Flinders Ranges on the right and the rugged hills on the left.  During the day, as the light changes, the colours can be spectacular.

Pt Pirie should be a great spot for cruisers to visit, with most requirements just across the road from the wharf.   But the fact is that facilities are just plain lousy.  At anything other than high tide we have run aground trying to go alongside the tiny pontoon (8ft x 12ft) at the Royal Pt Pirie Yacht Club. Our yacht is 36ft on deck and too big for any of the small pens at the small Council-operated marina, and my partner refuses to climb rusting and dangerous ladders on the wharf from a raft-up to disused fishing boats.

South of Pt Pirie the next decent anchorage is behind the sandbar at Wood Point  in moderate winds from E – SW.

Pt Broughton is an under-appreciated asset to the cruiser.  The long-established jetty now has a purpose-built pontoon for recreational vessels.  There is potable water available on the jetty which leads directly into the short main street, where all facilities are available for replenishment.  The entrance to the channel requires a rising tide, but it is well worth the effort.

Wallaroo has a commercial marina, close to the pub, but the town itself is a fair walk.  Rather than pay marina fees, we prefer to go further south and anchor in Tiparra Bay, best anchorages depend on the winds.  Pt Hughes and Pt Moonta are both great little places to spend some time ashore, and great holding along Cape Elizabeth.

At the top end of Wardang Island is one of the few anchorages in northerlies along the eastern side of Spencer Gulf.  The area bounded by Green Island, Rocky Island and Pt Pearce seems to provide surprisingly good anchorage in all but the strongest W/SW.

There is a channel through the shallows to make your way across to Pt Victoria, and from there we head south to a spot about 5nm N/NE of Pt Turton in Hardwicke Bay.  This is a community of holiday houses with no facilities ashore.  For provisions Pt Turton is the go, or the general store at Corny Point (where we have sat out S/SE gales) and is a favourite of ours.