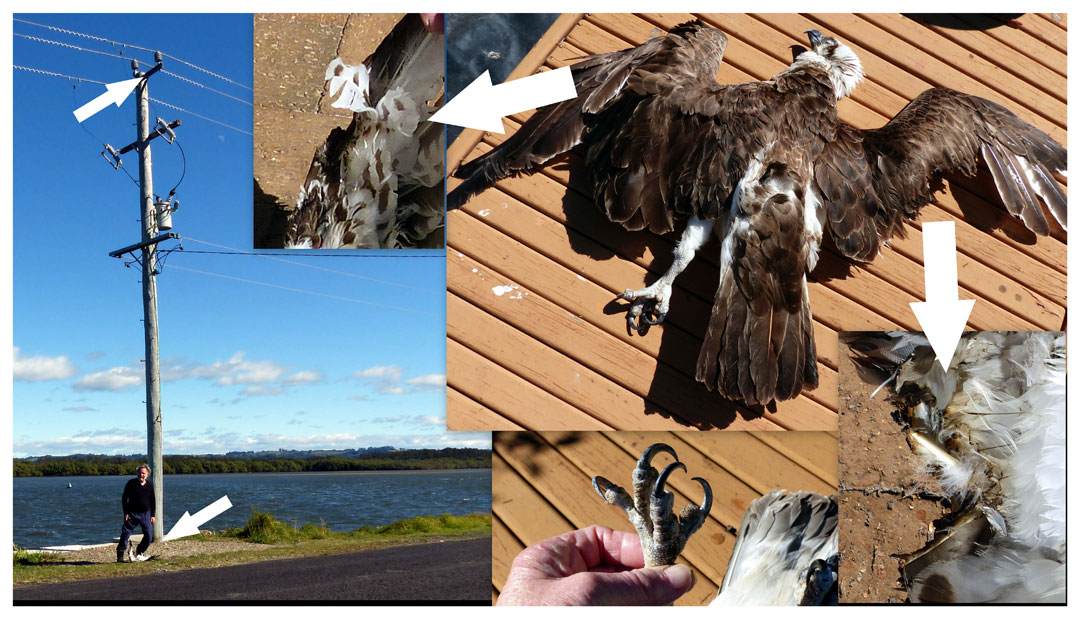 A pair of Ospreys often take their fish to this power pole’s center cross arm to eat their meal. But last week one of them made a fatal error in attempting to land on the top cross arm which carries high voltage. Jack and Jude live opposite the power pole and saw the dead bird hanging until a gust of wind brought it to the ground where upon examination we found a burnt area on each wing. Sadly, Ospreys usually mate for life. On a more positive note, our grandchildren got a great opportunity to see a graceful wild creature up close. Touching the beast’s very sharp, curved talons clearly impressed them. They learned heaps. 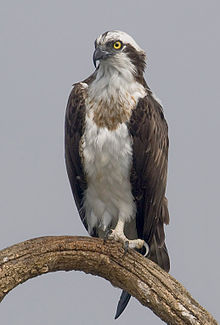 Wikipedia states; The osprey (Pandion haliaetus), sometimes known as the sea hawk, fish eagle, river hawk or fish hawk, is a diurnal, fish-eating bird of prey. It is a large raptor, reaching more than 60 cm (24 in) in length and 180 cm (71 in) across the wings. It is brown on the upperparts and predominantly greyish on the head and underparts. As its other common name suggests, the osprey’s diet consists almost exclusively of fish. It possesses specialised physical characteristics and exhibits unique behaviour to assist in hunting and catching prey.

The osprey differs in several respects from other diurnal birds of prey. Its toes are of equal length, its tarsi are reticulate, and its talons are rounded, rather than grooved. The osprey and owls are the only raptors whose outer toe is reversible, allowing them to grasp their prey with two toes in front and two behind. This is particularly helpful when they grab slippery fish.

You may recall August last year Jude stepped off a rock ledge above the Kimberley’s remote King George Falls and put her leg deep down a hole. Falling forward, a heavy pack on her back, her knee should have snapped. She’s tough my lady, but she’s just flesh and blood. Her tibia was crushed and she fell writhing in pain as daylight dwindled. Full story in last September’s blog. (towards end) 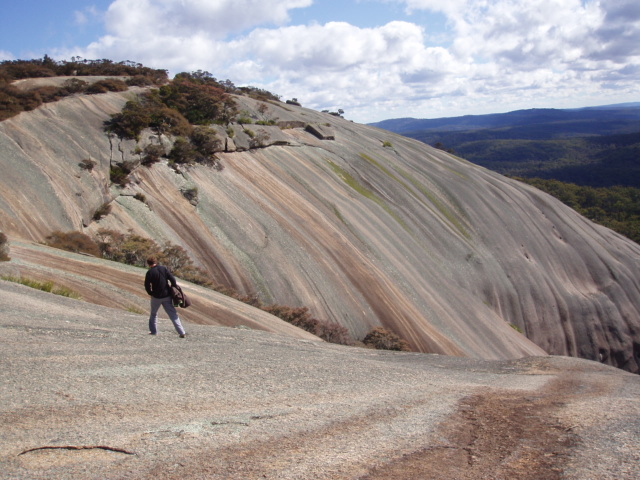 This last twelve months have been difficult for her. For five weeks following the incident she could not stand and pulled herself around our boat using handholds. Being a strong north England lass, she still stood her watches as we slowly made our way back to civilization to be examined at the hospital in Dampier, Western Australia five weeks after the event. Then, firstly on crutches and then using a leg brace, Jude slowly regained the ability to walk short distances. Over these last twelve months she has religiously exercised her leg to strengthen the damaged knee. 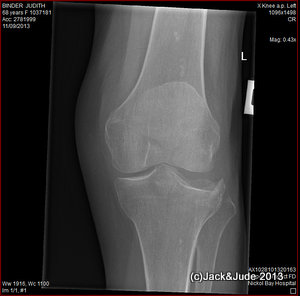 Note: large gap on outside

At home now, we had a local orthopedic surgeon examine her leg who said an artificial knee would not stand the abuse of her previous active lifestyle and to keep using the damaged knee until the pain forced her into a less demanding life. Then they’d replace her damaged knee.

Well, taking the surgeons advice we decided to test her busted knee by loading Jude up with a medium load and taking her bush for a week. For the first real test of her fully healed fracture we chose a relatively easy walk along a well formed forestry track. Not knowing if she could even walk with the 14 kg on her back we were filled with trepidation. 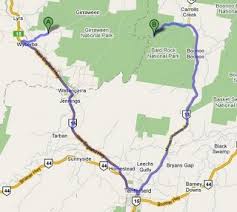 For this first outing we selected an area well-known to us; Bald Rock National Park, home to Australia’s largest exposed granite tors.  Located near Tenterfield in northern NSW, it’s a three hour drive from our Ballina base, a lovely area stretching well past the Queensland border. Getting there was easy, setting up camp in the camp site no worries. Next morning we loaded up and cautiously set out. First we trudge up over the steep divide, Jude fell behind but answered cheerfully whenever I called back. It’s a ten kilometre walk along a fire trail to another outcrop of pink granite known as South Bald Rock where we know a lovely camp next to an alpine bog that always has good drinking water. It was a hot, sunny, winter’s day on a track that goes up and down over undulating open forest. Jude laboured on without complaint while I, on the other hand, grumbled. This last year has been a bit sedentary for both of us and I’ve lost fitness. My excuse for having leaden legs, I was carrying a bit more than I ought to have. At the bottom of my sack, four litres of good Aussie red wine to ease the pain at night. Plus, I had elected to take all the treats and extra meals because if Jude could make the distance, we’d make a long stay of it. 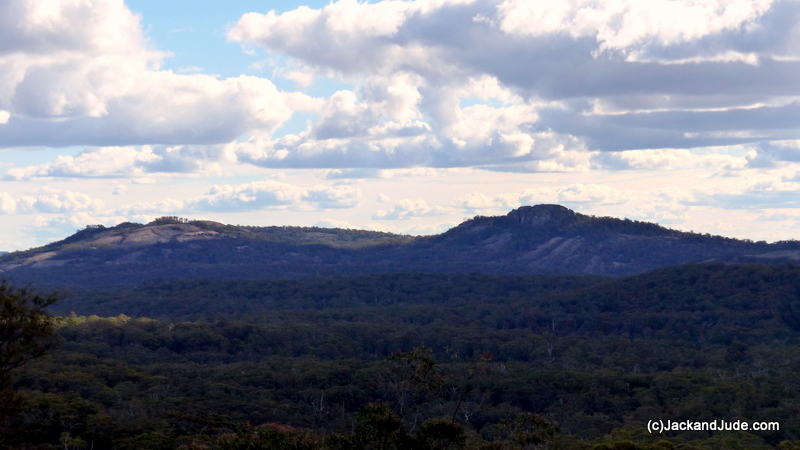 Mt Norman – the tallest in the area from our campsite

The good news is Jude made the outward trek with a fair bit of huffing and puffing, but without her knee collapsing nor causing her much pain. She had of course started taking her anti-inflammatory tablets a few days earlier. Well, the news got better and better as each day passed. We decided not to shift camp, but to use the one at the base of South Bald Rock as a base, taking extended day walks through the surrounding forest, climbing several tors in the process. The verdict: She’s good to go. No knee complaints worth noting considering we are past our seventh decade doing these adventurous things. 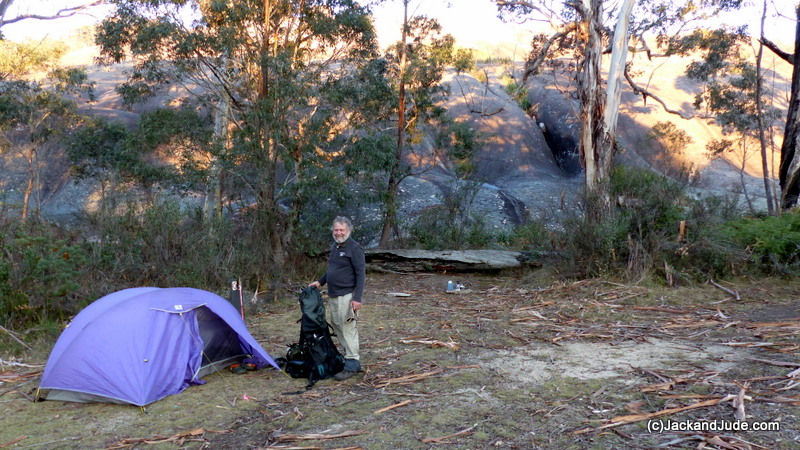 Our camp at the base of South Bald Rock

Jude here saying it is nice to see my man so pleased, and me too because the final DVD disc has come out super quality. Jack says it is because the original footage is HD.

The Blu-ray edition is of course a bit better in colour and finer detail, the picture more lifelike. We sent a copy on a SD card to my sister in England and they had a party of thirty at my nephew’s house watching on his big screen. All very excited. Loved the wildlife. Little ones shouting whenever seeing the birds. It’s nice to share these exciting adventures. Can’t wait to send a few special friends a copy.

I see a specialist on Monday who will examine my swollen Achilles’ tendon that has been trouble for some time. The day after, if the weather holds good, Jack and I are going bush walking for awhile. I’m taking my sketchbook and will look for a sunny spot among the trees.

If you are interested in joining us on our voyage through the Coral Sea click here.
Watch the Trailer