Since arriving on board the sailing yacht Banyandah mid-December, we’ve been away out of touch.
Christmas in Strahan brought the gift of warm, bright sunny days with no rain that went on and on for many weeks. Having endured six months of New South Wales Covid restrictions made worse by a dramatic increase in cases before our departure, we strongly yearned to wander freely without fear. And the only place to do that is the wild natural world. So, as soon as Banyandah’s systems were checked and returned to service, we loaded our base camp into the Green Machine two-person kayak then filled every remaining space with food and grog. With a spell of extraordinarily calm weather, we planned to escape up the isolated King River, once known as the most polluted river in Australia. Jack and Jude know it well. Our many years exploring this area have witnessed an uplifting revitalization of the King River, proving once again that Nature will recover once humanity’s pollution has ended. Survying pollution of King River in 2010 A dozen years ago in 2010, Jack and Jude tramped the rail line that runs down the King River Valley, which is forbidden today. We filmed the well-known pollution to produce a segment for our first Tasmanian video. In doing this we witnessed golden syrupy backwaters and shores thick with foul smelling poisonous substances littered with discarded tyres, old fridges, and plastic refuse. Thankfully, over the years, a concentrated effort by concerned groups has removed much of this human litter. And this, aided by the closure of the Queenstown copper mine, is seeing a rebirth back to a luxuriant rainforest river valley alive with melodious song birds, interrupted now and then by screeching squeaky-door Gang-Gang cockatoos. 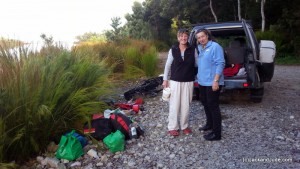 Our first King River kayak adventure became possible in 2016 when dear friend Megs, owner and manager of The Crays Accommodation in Strahan, transported our Green Machine to Lowana at the mouth of the river. From there, we paddled upstream to the camp we had used in 2010. It lies alongside the stream near the Iron Bridge. But a higher river level in 2016 made that spot unsuitable, and so we continued upstream, finding an even better location below the river bend before Lower Landing, where there is road access to the rich forests on the Teepookana Plateau.

We have used this exquisite campsite several times since. Once to explore the wonderful forests that spread across the Plateau, and once to paddle miles upstream to Dubbil Barril Station, sitting next to the gorge.

But for this year’s adventure, we planned to explore the small creeks feeding the river. With our heavily laden kayak waiting on deck and our alarm clock set to herald the dawn, we slept like newborn babies, knowing everything was ready.

King River Escape
From Banyandah to the King River mouth, we paddled eight kilometres upon a glassy Macquarie Harbour reflecting a collage of grey clouds fringed in black. The two-hour journey, an inspiring treat with soaring mountains on our left and a long green ridge protecting us from the wild Southern Ocean creating so much natural beauty we thought little of the work. 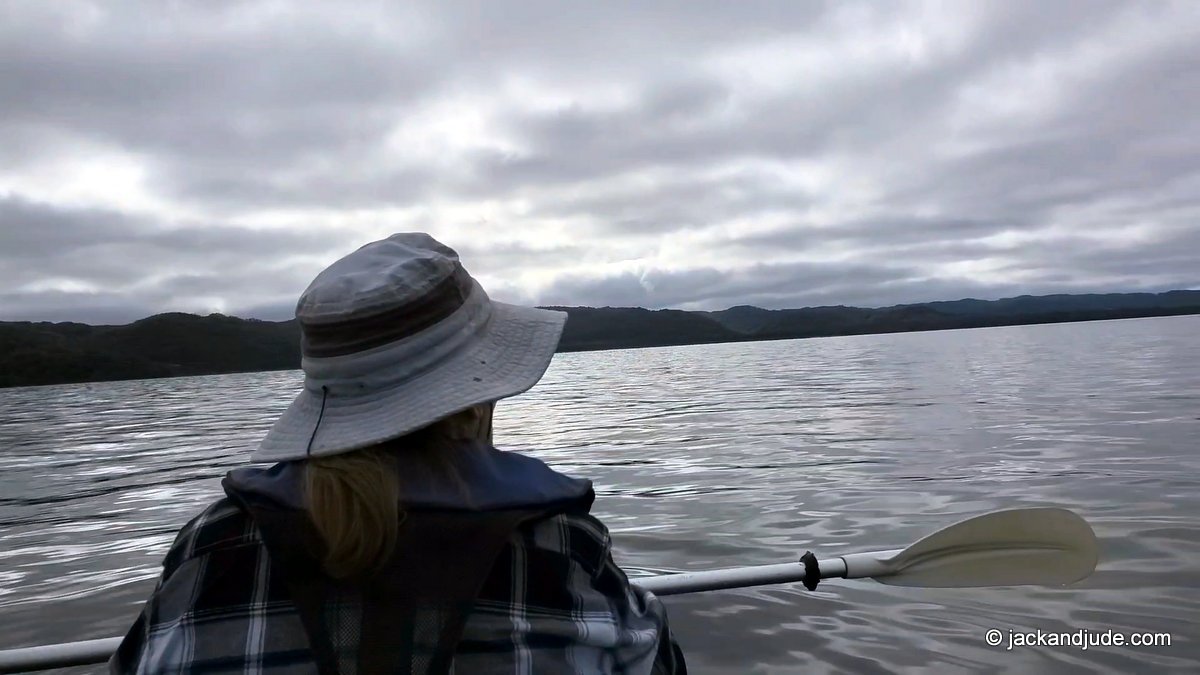 A Latin proverb says, Good fortune favours the brave, and lucky us found little or no current coming down the river. So we paddled the next seven kilometres in record time, and just before noon, stepped ashore at our campsite. Would you believe? As we unpacked, the river began to flow. And before we got our camp and supplies unloaded, the river had risen half a metre. In a race, we finished unloading to find a safer location for our Green Machine.

During the next three days, we explored two nearby creeks and filmed exquisite scenes of Nature, unpolluted as created. Grab a cuppa or cold one and watch our latest King River YouTube video to see what we witnessed.

BIRCHES INLET TO GORDON RIVER OVERLAND
Our next adventure took us to the far southwestern end of Macquarie Harbour to the large inlet once thought to be the original outlet of the Gordon River. Birchs Inlet is named after Thomas Williams Birch (1774-1821), a surgeon and owner of the whaleboat used by James Kelly when he discovered Macquarie Harbour in December 1815. Birchs Inlet is nearly ten miles long and about half mile wide and is an important area for the endangered orange-belly parrots. 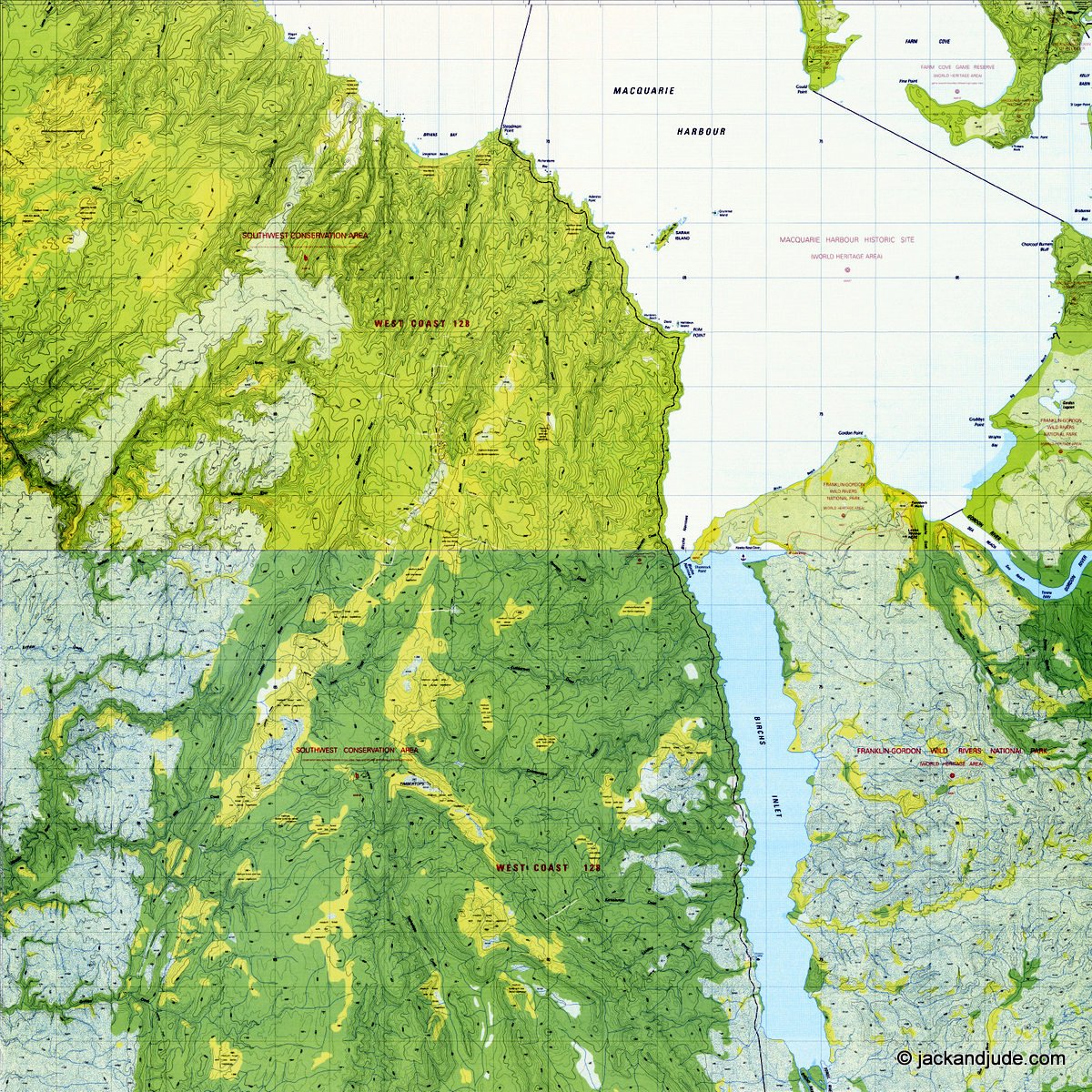 Going there on a mission to trek across the peninsula separating Birchs from the Gordon River. Our idea was to leave our vessel unattended in the landlocked waters of the inlet, then explore the open flats and plateau, hoping to find a viable route to Finns Camp at the entrance of the Gordon.

Filling our vessel with water and provisions to last many weeks, we took a wet northerly out of Strahan for a fast, exhilarating 22 miles sail. Past all the fish farms, past the Penal Station on Sarah Island, to a barely noticeable crack in the harbour’s southwestern corner. There we crept in under reduced sail through quickly shallowing waters and through a gap between forested cliffs.

A local identity prominent within the fish farms had established a mooring at the entrance to Hawks Nest Cove, perfect for our use. Easily finding it, we attached our lady with less than a metre of water under our keel.

First challenge, establish a route to the button grass plains through the thick, lush vegetation lining the cove. This we achieved via the creek, using our path finding skills of least resistance grappling through the tangle of interlocking bauera and razor sharp cutting grass. Like night into day, emerging from the last fringe of manuka, a flowering myrtle well-known for producing Manuka Honey, we entered a wide clear plain with knee height tea-tee and button grass. To our left opened a vista of harbour and mountains looking quite different from that direction. So, off we tramped towards a distant escarpment thinking it would lead directly to the Gordon. 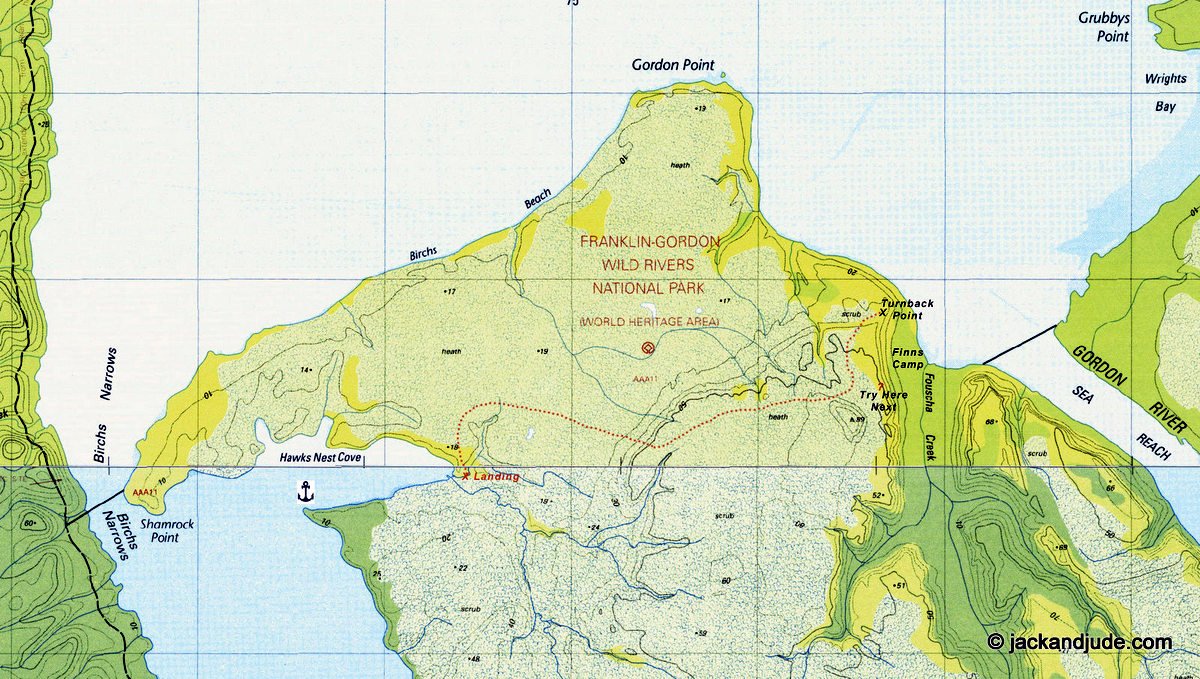 All weather mooring in 3 m depth close to shore

Under picture perfect clear skies, we made fast progress as the sun rose overhead, cooking the hard ground as well as ourselves. Good thing we brought lots of water.

En route, we brushed through brilliant white flowering tea-tree while avoiding the industrious spiders on webs strung between obliging stems. Fat, overfed spiders they were, feasting on a bevy of quivering March Flies, a type of biting Horse Fly that were in plague proportions. 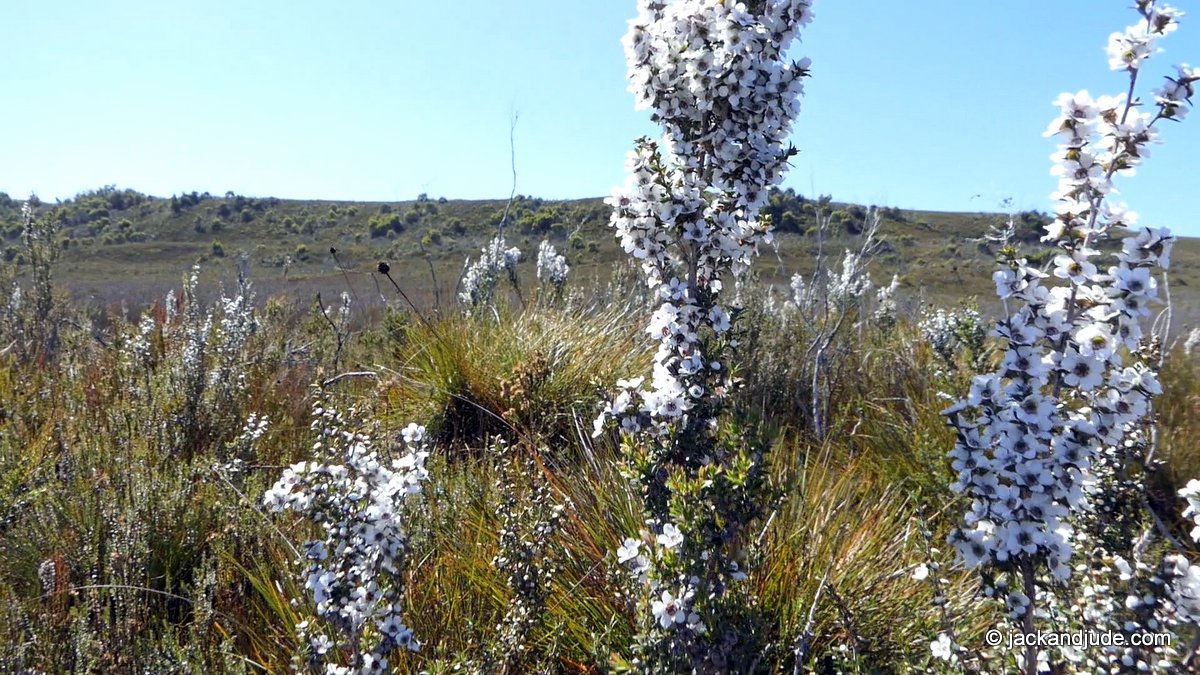 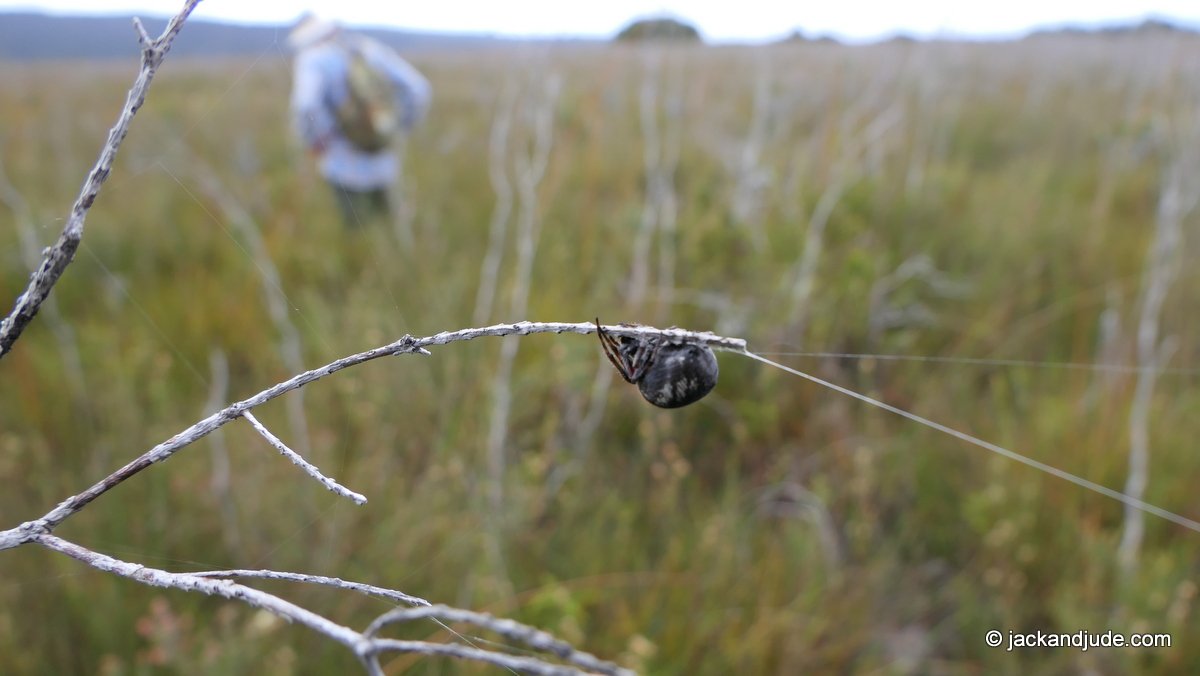 Our day progressed rather well up and across the escarpment until reaching the forest fringing the Gordon River. Once there, a steep descent had to be negotiated through thick rainforest that, from our view, looked impenetrable like a high prison wall. Choosing a moderate slope, we dove into the maze and began tearing and ripping a narrow passageway. But contained within vegetation well over our heads, the day’s heat rose to danger levels, as did the swarms of March Flies attempting to suck us dry. Large ferocious biters, March Flies are stout-bodied, 6mm to 25mm in length with enormous eyes. To avoid being bitten, it’s best to be totally covered.

After an hour and a half of struggling in that heat, Jack’s legs began cramping and Jude’s patience ran thin. Gasping for breath, kindly sirens called to us, but not to our destruction, instead to the salvation of open sky and cooling winds. Wise folk say smart people know when to quit.

We salvaged the best of our efforts by climbing a nearby ninety metre cone that gave us spectacular views into the Gordon River and were further rewarded to record a catamaran sailing in.

If you want a good chuckle at two oldies battling nature’s forces, watch this.

Mobile Phone Coverage
To close this episode on a more positive note, we discovered good mobile coverage in Betsy Bay, see our guide for anchoring details, and also in Bryans Bay (Steadman Point) at 42° 22.2’S 145° 24.0’E in about 9m total depth (rocks near shore).

After enjoying another week tiding up the track from Farm Cove to the Sorrel Plateau, we took a perky sea breeze back to home base. 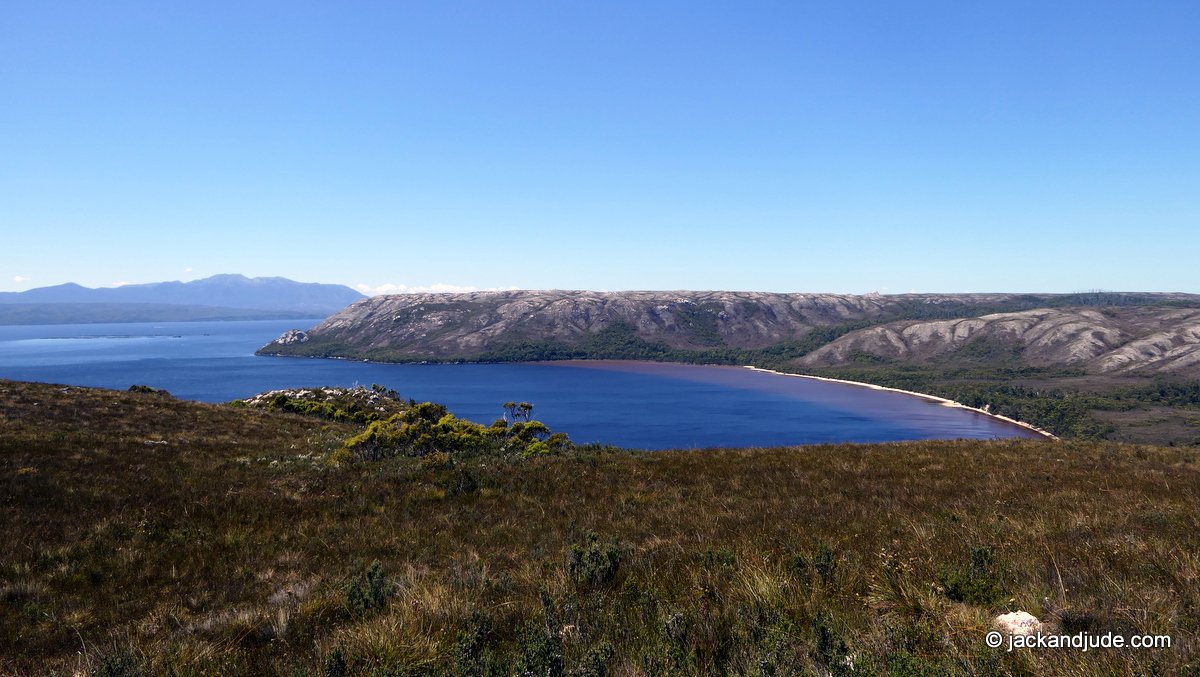 Betsy Bay – excellent anchorage for south and west winds with a track to the west coast. 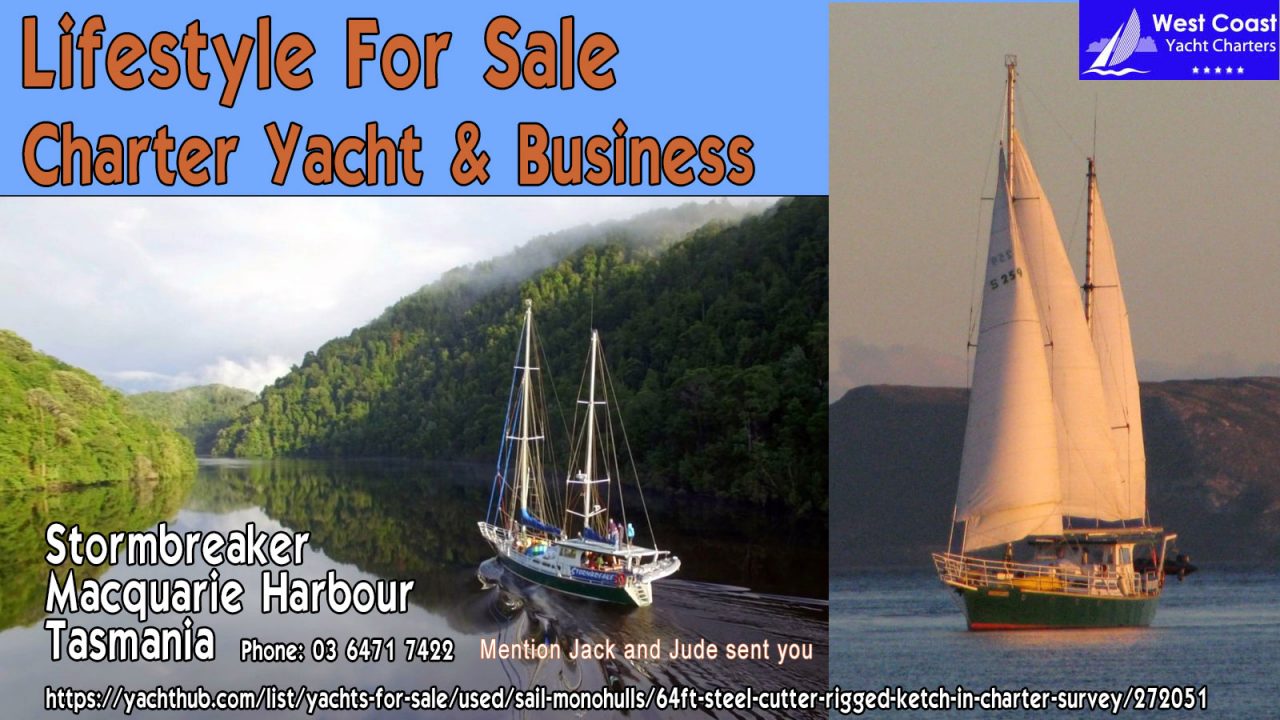