At the far southwestern tip of Tasmania, Australia’s largest island, lies a special place so far away from the known world you could easily think yourself on another planet. It’s impossible to drive to this extraordinary place – there are no roads for hundreds of kilometres. You might walk, but that would take six or seven days. Or you could hire a tiny aircraft and land on a miniscule quartzite airstrip hacked from wet buttongrass plains. But then you’d have no place to sleep, except on the ground, and have no way of exploring that magical land of rivers and mountains. So, by far the very best way of reaching this exotic kingdom is, you guessed it, by sailing yacht, approaching its majesty using Nature’s power to better become one with its vastness.

When I last wrote, Jack and Jude had been exploring Macquarie Harbour and the Gordon River for eight grand summer weeks. To stay another eight weeks would have been wonderful, but the seasons were changing and soon the mornings would be frosty, the clear nights needing a thick doona on the bed to stay warm. Reluctantly we farewelled all the friends we’ve come to love over our three summer visits, and prepared Banyandah for the unpredictable Southern Ocean. Inside landlocked Macquarie Harbour it’s easy to forget the feel of ocean swell, although we had often heard its distant thunder on ocean shores. While preparing at Mill Bay, hearing it rumble just over the hilltops prompted us to secure all bits and pieces very tightly. The Green Machine we folded up, packing its frames and bulkheads into two rubberised backpacks then stowing these on deck. Little Red, our alloy dinghy we lashed to the foredeck with emergency supplies inside. When all was ready, we motored out through Hells Gate, battling for the first time an unexpected incoming tide, the throttle well open. Then with the sun setting, Banyandah pirouetted around the training wall’s seaward tip and into Pilot Bay for a few hours rest in clear waters, protected from all but north to northwest winds. 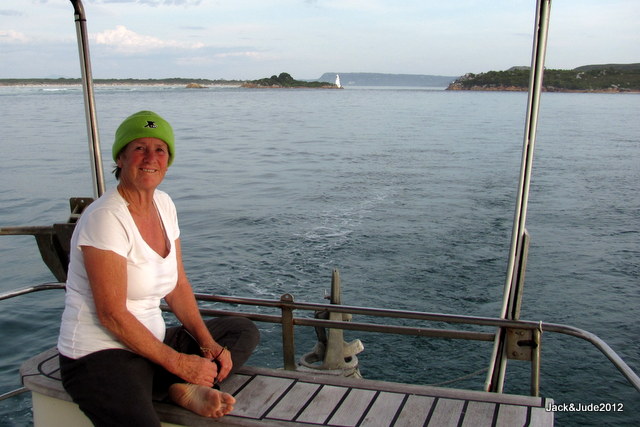 Bucking the current out Hells Gate

Early to bed, but still awake at nearly midnight, my brain too active, churning through voyage plans and stray thoughts. Lucky Jude, she can sleep standing up. But I slept lightly until 3 o’clock, when the ship’s clock striking six bells along with Banyandah’s light roll got me up to incoming wind swell. Oh my god it’s so black. Fumbling I gulped coffee while making tea for my good lady, and then all too soon we were underway, motoring away under starry darkness into clear open sea with a slight NE breeze chilling us and ruffling the mainsail.

Sweeping round twice every fifteen seconds, Cape Sorell’s light was rounded to find an easy sea with only 1.5 to 2 metre SW swells. Both Jude and I let out sighs of relief as we turned into it.

Through the next few hours our Perkins droned on as the land began to brighten with glorious reds, and a bit more breeze brought sweet land aromas that miraculously filled our full rig. Hurrah! We could silence the thump of our diesel to enjoy distant purple-blue mountains and yellow beaches. But by full daylight grey clouds drizzling rain took away that breeze, and we were motoring again. Off and on we sailed an hour, then the wind would dissipated, leaving us to motor sail, always making good speed along a vacant coast with not one hint of mankind in sight. A few seals languished with raised flippers as if a warning and a black cloud of mutton-birds swarmed then landed near us for what we imagined was a mid-morning natter. Miles passed, grey clouds with rain giving way to sunshine, the wind at first bowling us along then disappointing our expectations. Then while eating our lunch, dark blue wind ruffles brought a stiffer wind of 25 knots that whisked Banyandah along at better than 7 knots!

Getting nearer our destination, dramatic white rock clusters popped out mountains smoothly coated in tawny brown buttongrass. Pushing up through that mosaic of brown and green, the buttongrass seemed more like a net holding the rock from bursting skywards. And where white quartzite did burst through, the mountaintops appeared snow capped. In 1798, when just a young midshipman piloting the Norfolk on a voyage of great discovery, Matthew Flinders described the mountains as ‘the most stupendous works of Nature I ever beheld… The eye ranges over these peaks with astonishment and horror.’ 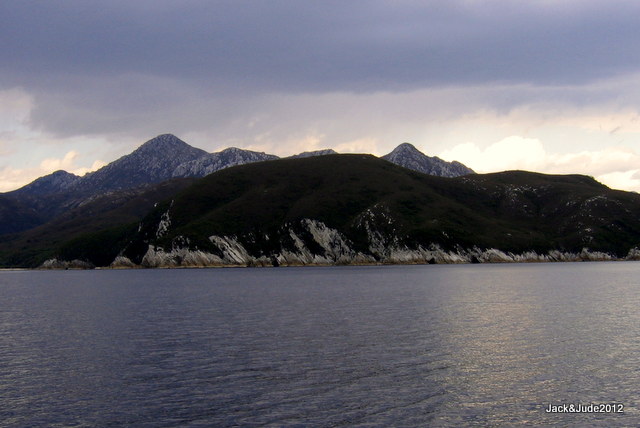 Late in the day, the Pyramid Islets just ahead had us thinking we might get in before dark. Now that was a bonus worth striving for because when planning the voyage we thought ourselves lucky to be arriving before midnight, and had accepted the perils of entering Port Davey in the blackness of a moonless night. But with rain limiting good visibility to just a few boat lengths, following the GPS would be a real worry, and so would encountering other craft when anchoring. Mentally I’d already dug out our big spotlight. 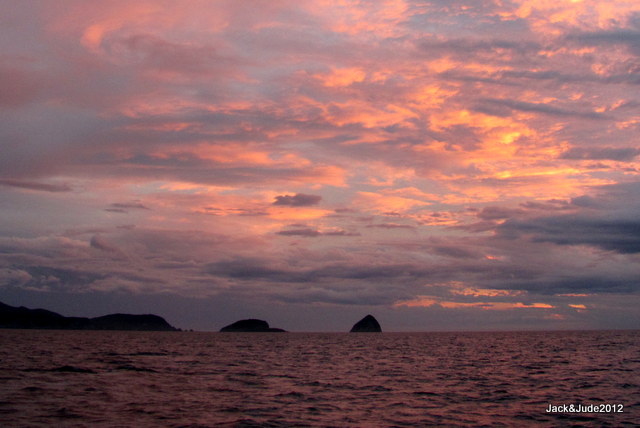 Once past the Pyramids and Coffee Pot Rocks we rounded North Head and blast! Ran straight into a headwind! Opening the throttle, we pointed our ship to the north side of Breaksea Island some six miles ahead. From our first visit, we knew Breaksea would be indecipherable from the mountains behind it and turned to our GPS to set the right course towards the channel into Bathurst Harbour. Whitecaps all round, heeled and going hard motor sailing at speed into Port Davey, daylight was fast fading, leaving us wondering would we beat last light? 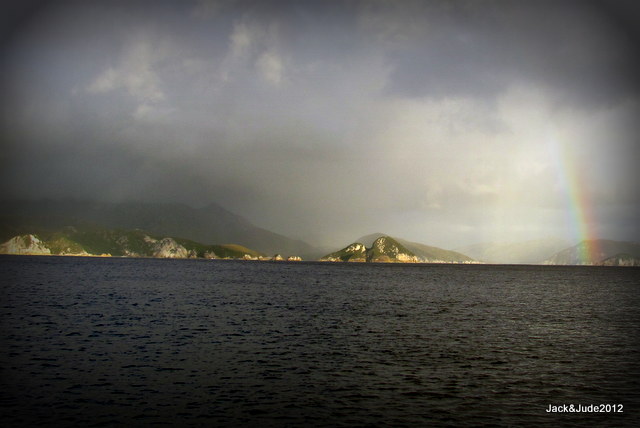 Breaksea went past murky in dimness, white breakers crashing marking its dangers, while on our other side Pot Boil creamed white and then like a magicians’ trick vanished into darkness. Suddenly the Southern Ocean eased its rocking motion and we entered Bramble Cove lashing rain veiling four boats at anchor. Thankfully all wore bright anchor lights, except for a rather large square rig whose immense windows cast good light. Passing behind her we recognized Outward Bound. Her captain must have heard our deep throbbing engine as someone rushed on deck to hang out a light as we dropped our hook amongst four pinpricks of light in a coal mine’s blackness.

How lucky can you be! Found paradise once again, and in record time, securing our good ship before blackness would have made our entry quite dangerous. A quick cuddle and a few tender kisses sealed our good fortune then we changed quickly into dry clothing and cracked open an ale to celebrate.

Ninety miles good in sixteen hours. All in all, a very good passage.