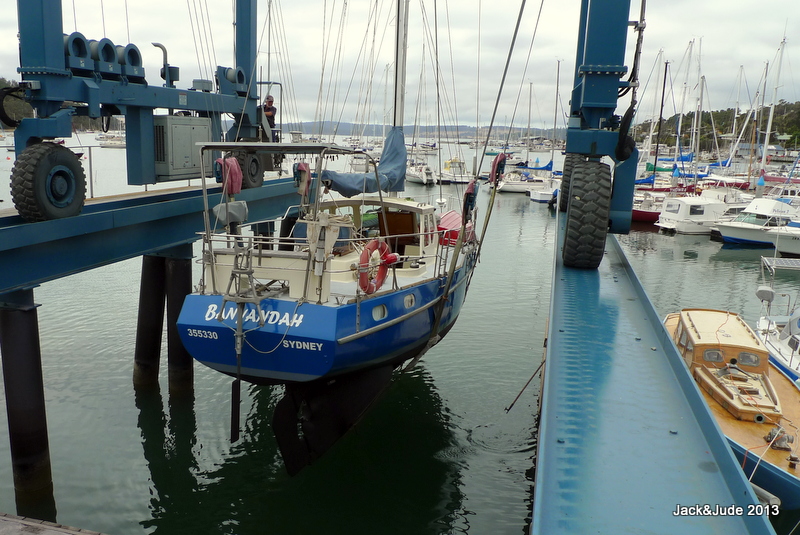 What a joyous, anxious moment when Banyandah touched the sea after her  seven months standing high and dry at Oyster Cove Marina, Tasmania. Our intrepid lady had withstood freezing winter gales then blistering summer heat while she patiently awaited her return to the element she loves most – the sea. It brings her life and allows her to wander to faraway lands – The sea that brings beauty, excitement, and knowledge to all brave souls aboard her.

Getting her ready to splash, Jack and Jude laboured eight tiring weeks repairing and improving their treasure while living aboard, going up and down a vertical ladder dozens of times everyday. That tested our physical strength, the metal rungs toughening our hands while our balance got tested during the two weeks we worked upon single board scaffolding sanding and repainting her topsides.

Being shoestring sailors we cannot afford to hire specialists to do the work. For us, it’s do it ourselves, or don’t do it at all. That’s okay. At least we know our boat intimately, her strengths, and weaknesses, and we reap the reward that it was done with our sweat and dedication. That’s not for everyone. But it’s the way Jack and Jude have lived their lives and even though it’s all getting a bit harder as we age, we will continue to slog it out while we can.

Work completed:
First, we had some above water hull repairs to make. Ferro-cement has its unique problem of embedded steel rusting, and on Banyandah we have a few repeat offenders that need attention every three or four years.

Every window on Banyandah was resealed. One in the cockpit leaked a titch, and has discoloured the laminated safety glass, but two up forward dribble when pounding to weather, so the whole lot were resealed.

Painting the topsides was by far the most difficult and time consuming task. Eight years ago, when rebuilding Banyandah, we had sprayed Jotun AS Hard Top. Unfortunately, no matter how much retarder thinners we added to this product, it could not be brushed or rolled without leaving horrible brush marks. That experiment forced a re-sand of one side.

Switching to single pack enamel, we bought four litres of Wattyl BR22 industrial gloss in a new shade of blue for a very reasonable price. Getting up at dawn to escape the breeze and hot sun, we tried painting over the old colour in one heavy rolled and tipped coat. This was also disastrous, requiring yet another re-sand of the other side.

Painting dark colours exposed to Tasmania’s harsh elements is difficult. Few days are windless. The quietest time is generally just after dawn, but it is still a bit nippy then so the paint tends not to flow. And if we waited for the sun’s warmth, the dark topsides soon heated up which evaporates the paint’s solvent, setting it up.

It took several mornings to eventually roll out an acceptable coating. It’s not perfect, but the hull is well protected with high gloss. Our neighbour John arrived after the Christmas break and after looking at Banyandah immediately began inspecting his hull. “I’m looking for overspray,” he said, turning to us. He couldn’t believe we’d rolled the coating.

With the hull repainted, the decks now looked untidy, so we scrubbed them to remove loose coatings and contaminants. Jude gave them two coats of acrylic driveway paint. We used fresh sandblasting grit for antiskid; it’s clean, salt free and sharp, and feels great under foot. The jury is still out on the long-term suitability of acrylic.

Mast work was high on our list after the new TIDES MARINE track arrived, and sliding the new track up our old one went very smoothly with a spray of liquid detergent. Then we trial fitted our new sail, the Mainsail from Hell as it has turned out – more on that later.

To save our new mainsail from chafing against the lower stays, we purchased 35 m of black nylon high-pressure air hose that will not break down with UV. Overcoming the problem of splitting it to allow wrapping it around the stays was solved by new friend Tom. An industrial electrician, he loaned us his rather robust wire stripper. This we set clamped between two timbers that had tubing sized holes bored and aligned to the stripper’s blade and guided the tubing while I pulled it through concentrating on cutting a straight line.

Chuffed by my efforts, I vigorously pushed the split tubing over the lower stays, where it closed around them perfectly. But on the longer intermediates I was forced to push even harder until a sound like a rotten rag ripping was suddenly followed by sharp pain. Damn! I’d torn another of my aging shoulder muscles. Bugger! More winch cranking power gone. In its place, dull pain at night, sharp jabs during the day.

As Tom had loaned us his work van, we took a break after that occurred, visiting friends at Strahan on Tasmania’s West Coast. There we hooked a ride up the Gordon River with dear friend Captain Trevor Norton on Stormbreaker while he picked up another load of rafters at Sir John Falls. We highly recommend this voyage to all looking for the most beautiful adventure in Tasmania. Tell Megs at The Crays on the Esplanade that Jack and Jude sent you. She’ll look after you like family.

Invigorated again, we drove back to face our final tasks. Judith recoated the cork cabin sole with Feast Watson satin varnish after giving the panels a good scrub and sand with 180 grit paper. This gives our cork floors a soft lustre that is antiskid. Meanwhile, I unbolted the cockpit floor exposing our vintage Perkins six cylinder diesel. Down in that cavern I reinstalled the injectors I’d serviced at home, changed the fuel and oil filters then drained the 12 litres of old oil from the sump before hand pumping it into containers. After that I refilled our 70 HP engine with fresh 30 W monograde oil and the gearbox got some new oil too. Next, while greasing the pumps I remembered our troubles in 2008. We’d overheated battling down the WA coast, so I removed the engine’s heat exchanger, took it down to the water tap by the slip, unbolted its end covers and flushed it clean. Finding plenty of ribbon grass in the raw water strainer, it got a good clean out too.

Antifouling Banyandah’s vast underwater area was our last chore. We have used Altex #5 since relaunching Banyandah in 2005. It works amazingly well keeping shell off our lady. We have found two heavy coats, with another along her waterline and rudder, protects her for two years. All up, we put on 18 litres using a heavy nap roller.

After morning coffee on Monday the 21st, smiling Phil and his blue ‘travelift’ slowly crept in to surround our lady. Its engine roared, Banyandah jiggled trying to rise from her cradle. Was she ready to leave? Not quite, a side arm held her back. Overcoming this delay, she was soon poised over the water she craved with us getting rather anxious. Would her engine start and run sweetly? Would we find any leaks? Would we remember how to drive out the narrow confines after seven months off boat duty? 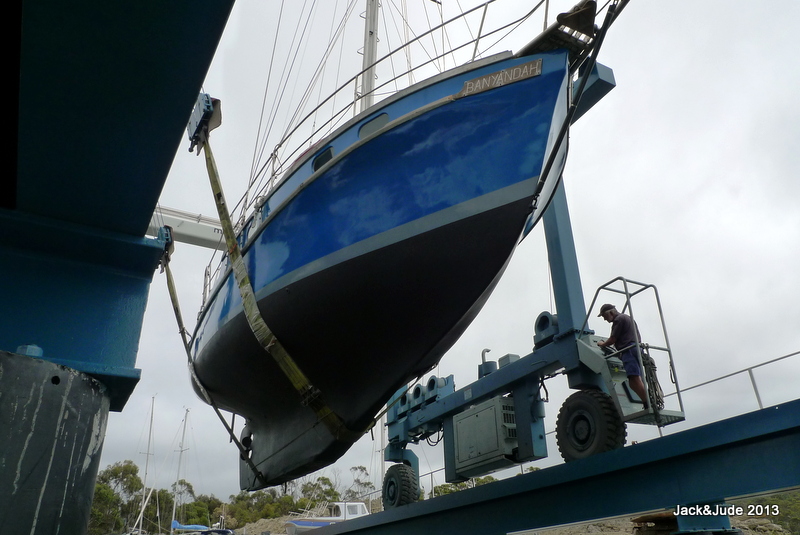 Like counting off systems before launching a spacecraft, we mentally worked thorough our lists. With all valves closed, the travelift engine roared again and Banyandah sank serenely towards the briny. When the flat surface of sea had risen to within 50mm of our waterline, our lady danced in apparent glee. Clamouring on board, the first impact was how low to the water we felt. That vista unleashed untold memories, and in that instant I again became Cap’n Jack, master of the Banyandah. Without conscious thought, Jude checked bilges forward, while I slid into the engine space to open the raw water seacock. A nod from Jude had me reaching for the ignition key, and without hesitation the old donk kicked back to life. The first piston fired, then a steady thump, and delighted I watched the oil pressure hit its mark then jumped to watch if seawater escaped with the engine exhaust. Right alongside me, Jude murmured her concern at the dry exhaust. But I only had to say, “wait” when out poured cooling water. At that moment we once again became a go anywhere adventure machine.

But not all is sugar coated. Our Mainsail from Hell has become a monster and we are battling with its maker over doing the right thing. We’re in a spot as the sail is not to our specifications; we feel it is too weak and difficult to work for blue-water sailing. What we want is what we ordered, but according to Martin Padilla of Somerset Sails, Cap’n Jack is an extortionist trying to get a free sail. Blimey! He already has our money. Have a look and tell us what you think.

A final note, I’ve dug deep for a short story from the good ol days when our boys sailed around the world with us. The One That Got Away is high seas action family style.

Wishing you warm favourable breezes till next time, 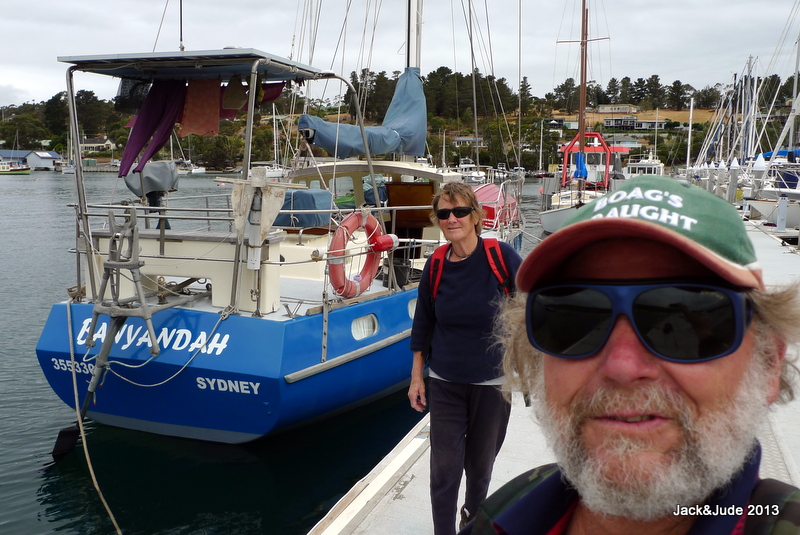