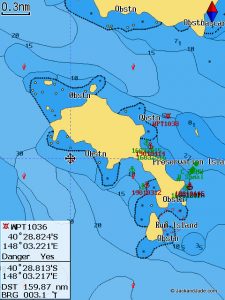 What all sailors dread – Fog and uncharted rocks. All our second morning anchored in West Bay, we explored Rum Island while a bank of fog sat low on the far distant west horizon, and when it began drifting closer, we packed away our toys and boarded Banyandah for a run back around the island. We have visited this area a number of times and know its shores are encumbered with off lying rocks, so we are cautious.

Not very long after lifting our hook and clearing the first point going north, which has some above water rocks jutting out from it, the fog closed in surprisingly quick. In no time at all, vision past the bow of our ship was diminished.

Jack was at the helm and made a turn to be well clear of the farthest rocks shown on our GME chart plotter. At the time, we were in 15 to 18 metres depth under keel and well outside the danger line. Reducing speed, both of us peered forward, talking glibly about the change of weather, when all of sudden Jude yelled, “turn hard left NOW.” And as I did so, this huge granite boulder came out the thickness. At the same moment the sounder started to plummet and my heart began to race. Instinctively I made a waypoint.

Minutes later, the water deepened and the drama ended. Twenty minutes after that, the fog passed, leaving us with the question of “What the?” Looking back, there was a whole string of big rocks extending out from Preservation where nothing was shown on either of our plotters. Both use C-maps cards issued 2012 and 2005. 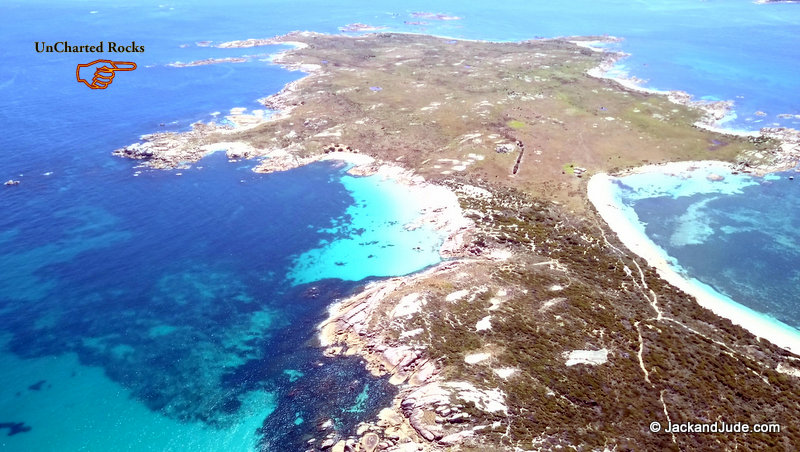 We’d anchored bottom of image in that sand patch, had cleared the last rock off the first point when the fog came in.

We have notified the Australian Hydrographic Office and wait to hear if Australian paper charts show these dangers. Understand, we are not trying make a case against the chart makers – We are doing our job of passing on local knowledge as sailors have since the beginning of time. Over the years, as explorers and adventurers, we have on occasion been in dangerous waters where it is paramount to be diligent, maintain a careful watch, and remember that you are on your own. 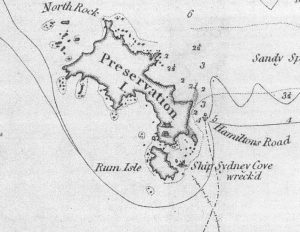 In 1798, Matthew Flinders did a crackerjack job of charting these rocks. Why aren’t that they on today’s charts?

“Overall, I would very much like to thank you for bringing this to our attention in such a well documented way via a Hydrographic Note. Based upon your advice, we have already updated the official electronic and paper nautical charts, though it could be two years before those changes are reflected in the unofficial recreational charts – another challenge we are attempting to address. If you note (or recall) any other areas where the charts don’t reflect real-world features, we’d most appreciate hearing from you again.”

We wrote back and suggested that if they chose to name those rocks that they call them “Jude’s Fright.

Firstly, I’d very much like to thank Jack and Jude of the SY Banyandah. They took the time to submit a very comprehensive Hydrographic Note to the AHO that has already resulted in changes to both the official electronic and paper nautical charts.  The only thing I can’t confirm is how long the changes will take to appear in the private ‘chart plotter’ style charts.

Secondly, they very rightly posed the question “Why aren’t they on today’s charts?” The answer is simple – because the extensive rock formation couldn’t be seen on the later survey that replaced Matthew Flinders’ efforts. (of 1798)

Preservation Island was later ‘fully’ surveyed by Commander HJ Stanley of the Royal Navy in the period 1874 to 1877. 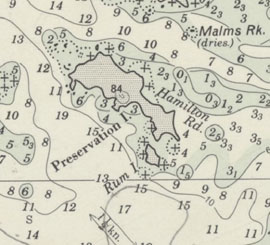 Note from J&J:
This chart also excludes the rocks extending from the point next to “I”

The rock shelf was drawn much smaller than in Flinders’ earlier version and was subsequently then partially covered by a depth value when incorporated in the British Admiralty chart of the era. It then remained that way for over 90 years, including within the last Admiralty chart, created in 1968. Although subsequently replaced by an Australian chart, even as late as 2002 when the latest full new edition was published the largest scale topographic maps didn’t show the rock shelf either, while use of satellite imagery was in its infancy at the time.

All this goes to show that, despite best efforts, the quality of a chart is dependent upon the quality and clarity of source information, and the efforts of our predecessors, both here and on the other side of the world.  They’re very careful, but not infallible.

To address this, the AHO, along with many other nations, categorise the reliability of every large and medium scale chart.   The system is known as Zones Of Confidence (ZOC), and there may be several different zones on every chart.   In this case, the area was categorised as ZOC C, meaning that positions could be out by 500 metres, and that there could be numerous undetected features rising from the charted seabed.   While official charts all show the different areas of confidence, this information isn’t included in the private ‘chart plotter’ style charts (user beware), and is the down-side of the convenience they offer.   Information about the accuracy of electronic and paper charts is available on the AHO website at www.hydro.gov.au.

So what happened after Jack and Jude notified us?   The Electronic Navigation Chart was updated immediately, and was available for download three weeks after being notified.   The paper charts followed about two weeks later – all as a result of observant sailors caring about the safety of those who may follow in their wake.   To them I say, thank you.