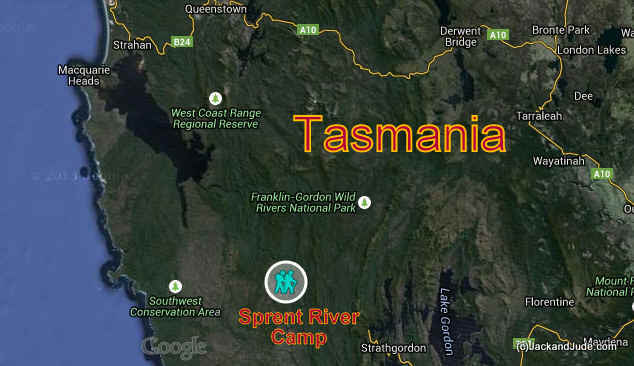 As the morning mist burned away from our Gordon River campsite, a Caribbean sky of the loveliest blue was exposed, so in full bush gear, we set off along the boulder shoulder. I travelled ahead, leaving Jude happily snapping photos of our camp against the sun struck limestone wall that  was alive with tumbling whitewater glistening in the emerging sun. In no more than a hundred metres an indentation began forming. Soon after, in a dozen steps I beheld another river flowing out the hinterland. Oh my! I’m suddenly laughing. Crikey! Our destination, the much-sought Sprent River had been right next to us all the time! And we had paddled the full journey from Banyandah in one day! Even better, we would not have to kayak through those nasty looking rapids that had stopped us the night before. 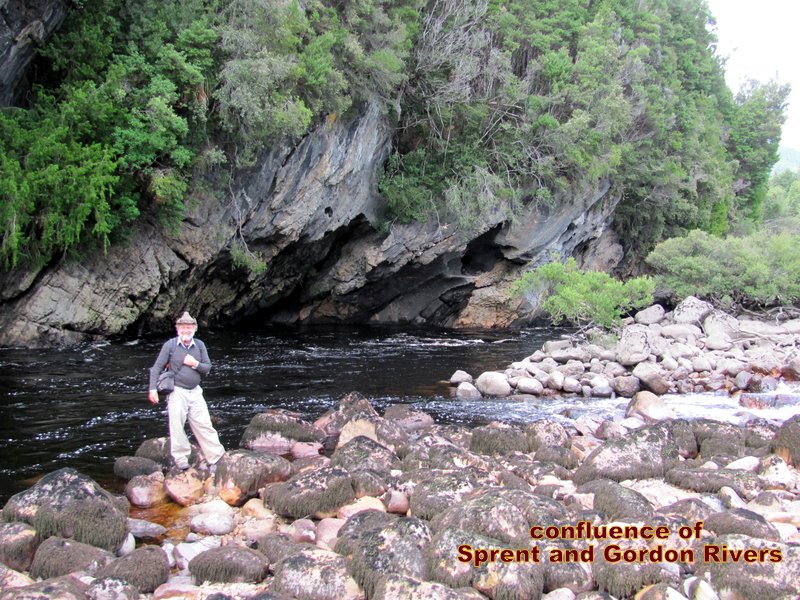 Hearing me laugh, Jude pushed through the bushes that hid our camp, and was soon laughing too. Grinning like kids on Christmas morning, we both shook our heads then set off to reconnoitre the Sprent River mouth.

Basketball-sized boulders that had been spewed out the Sprent by many floods spread over an area the size of several football fields with the river lazily flowing through pools not hugely deep. That meant we could cross, taking great care because breaking a bone when so remote would spoil the fun. 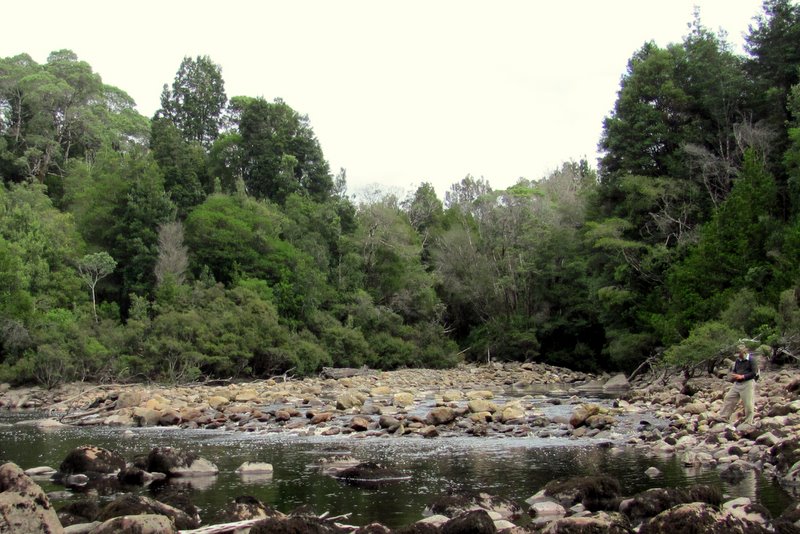 We had a 1933 Forestry map that showed a hut and stable on the other side of the Sprent close to the river mouth, therefore we wanted to explore that area. But other documents from Parks showed another hut further up the Sprent at the first bend, and we decided to look for it first. Entering its coordinates into our handheld GPS revealed that we’d find it 300 meters upstream and rather than negotiate the steep, rocky river, we elected to travel in the bush.

Once through the thick fringe, the bush opened into an easy, highly mulched area, not too horrendously encumbered with dreaded horizontal or razor grass. We even found what could have been a trail and made ground fairly quickly through the lush green surrounds.

Twenty minutes in, we reached an extensive flat area, and although our GPS said we had further to go, Jude and I fanned out to look for camp remnants. The Parks documents stated that a hut measuring 4 m by 4 m had been situated on the highest piece of land in the immediate vicinity. When surveyed in 1987, a sapling post and a large post defining its northern wall had been found, along with a corrugated iron chimney in the north corner, and near it, a piece of dressed timber that may have been its mantelpiece. It also described the site as well covered in leaf litter with the NE side obscured by regrowth. 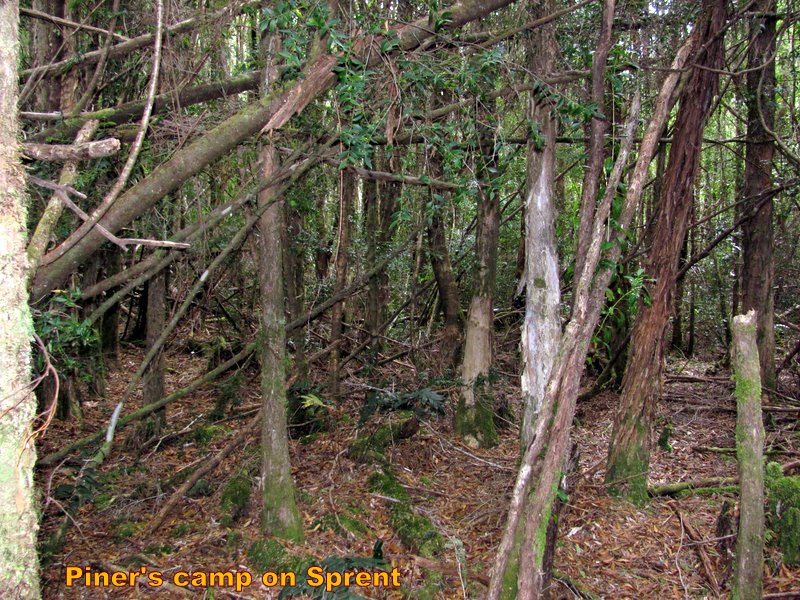 As we searched and observed the thick regrowth of saplings and spongy moss, we thought a lot can happen over 25 years. Annual rainfall exceeds 3 m, and before the Gordon Dam was built, floods were regular events. The site had last been used in the 1940s, and in the years up to the survey, the camp had disintegrated to only two posts and a piece of tin! We’d be lucky to find anything.

Scouring the area, kicking at tufts of moss, hoping to unearth a rusty piece of tin or mushy dressed timber, instead we found only sandy earth and more vegetation. The flat area stretched over a hundred by fifty metres, and each time entering a new patch, on our lips was the cry, “found it!”

But nothing was sighted, so we continued upstream. The vegetation got thicker, intersected by more small creeks with more razor grass. When about to turn back, our GPS started showing we were getting close. So I push on, into thick vines and horizontal, climbing slopes through head height growth, constantly watching the GPS. With only 150 metres to my destination I became bamboozled as the GPS began showing that I was going away. In fact it showed the hut location as being on the other riverbank! How could that be? Two maps showed the camp on this bank. Jude had now joined me and together we explored every bit of the “highest ground.” Inside a jungle, it’s like searching for the proverbial needle in a haystack, and after ages, we reluctantly turned downstream convinced the camp had been at the first location. 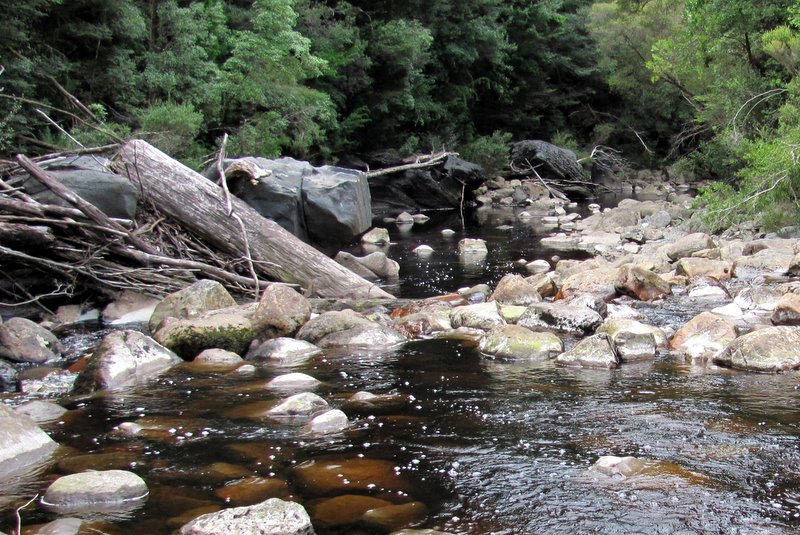 Huon log from another era still stuck in the Sprent

We rock hopped down the Sprent, and when crossing one of the many entering creeks, my eye spied a wood chip that had a cut edge. The chip, I discovered, had two cut edges made by an axe felling a tree, and the fact that it had not deteriorated meant it was Huon pine probably from the Piners era.

Elated, I showed Jude then promptly put it in my backpack thinking I’d give it to Ronnie Morrison. His father Reg may have felled the tree.

Back at the river mouth, the morning has flown and we returned to camp famished. After lunch, we again put on our soiled wet attire for another sortie, this time on the other bank of the Sprent. Dropping our boots and changing into Crocs we carefully navigated across to the south bank with our feet between slippery boulders and using our hands to steady ourselves until finding solid ground that was dissected by numerous overflow channels. Or were those log runs?

Battling through debris and fallen trees flooded into mayhem we entered the bush and immediately found a flat area thickly covered with leaf mulch, regrowth, and toppled timber. An hour in this muddle without sighting anything from the past drained away whatever spirit remained, leaving us slightly depressed. So we wandered down to the shoreline to gaze up and down river, where we thought of those hardy souls surrounded by fresh air and Earth’s bounty, flying chips from trees, felling them with sweat on their brows. A simple life, filled with challenges and achievements.

Back at camp, getting towards evening, chores to be done, notes to make, GPS positions to record, photos to label, and then of course dinner to prepare. Nodding afterwards, into our beds thinking tomorrow’s another day. 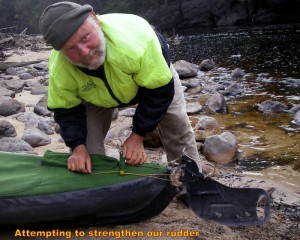 I didn’t sleep well and woke to thick mist then turned over to recommence the search in my head. The sun peeked out while we ate breakfast, so afterwards we packed camp and relaunched the Green Machine, filling it with our goodies before shoving off. We walked the kayak around the first shingles and the second, which was near where the Sandstone hut was suppose to be, and there we landed on a sand beach. Back in bush gear, we again climbed into dark forest. Immediately knolls surrounded us, created by what at first appeared to be small creeks, but which upon closer inspection became shoe roads made by log skids. We knew that the trees cut along the Sprent had been dragged by Clydesdale horses overland to this camp, and then shot off the bank or over the cliff into the Gordon River.

As the camp was shown closer to the upstream bend, we pushed in that direction, where every hundred metres we crossed one of those shallow ravines that now flowed a small amount of water. But after searching every knoll until reaching the next corner and finding nothing, we turned about to search in the other direction. Much further downstream than the area shown on our map, we found two chartreuse ribbons bounding a flat area that got our hearts thumping in anticipation. Could this be the stables area described as consisting of six sapling posts 2.8 m high. Supposedly sheets of corrugated iron should be found scattered around what had been a five stall stable.

Moving on, I crossed yet another ravine whereupon I came upon a slope of bracken followed by another flat area where I spied something odd. In searching, the eye looks for oddities, something out of shape to natural rain forest. Mine had noticed a dark line across a large log spanning one of those gullies. Coming to it, I saw a run of expanded metal bolted to the log making it an antiskid bridge. Looking closer revealed a wire rope hand line. Singing out to Jude, while waiting for her I found another log with the same type of expanded metal across it. This one had been rolled ninety degrees by father-time. Crossing it landed me in a level area and there I spied a brown jar with a rusted screw top buried three-quarters in leaf mulch. And sitting atop the mulch two metres from it was a clear glass square bottle. 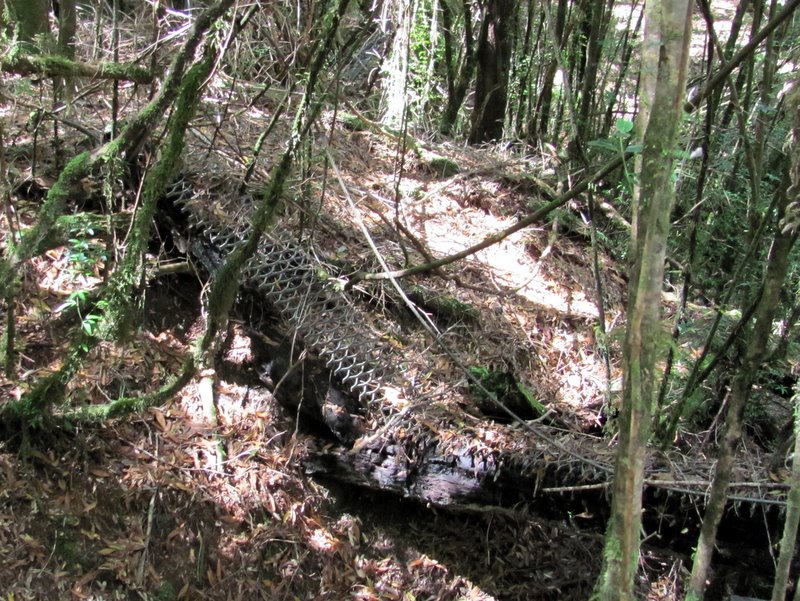 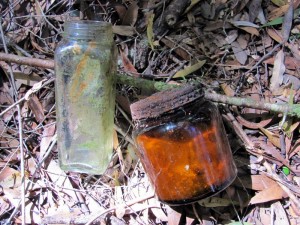 Jude had taken a different route than I, and discovered a third bridge also with expanded metal. She got busy photographing our finds, so I trotted off towards the area all the bridges lead to, hoping to find the hut site in a clearing with a hearth and row of sapling Huon pines. I had remembered Ronnie Morrison mentioning young Huon pines growing in a line where the roof of the hut had dripped rain, so my gaze went to the forest heights as much as it was on the leaf mulch floor. Huon, one of the longest-living plants, grows extremely slowly, so I wasn’t looking for lofty trees, just ones with a distinctive shape and colour. Plenty of myrtle grew there, and a bit of horizontal. But then I spied in a cleared area perfect for a hut, the telltale drooping Huon branches with spirally arranged, very small scale-like leaf. The site even held a lovely view upstream if all the new growth hadn’t been there.

Our tummies were now rumbling, and since we’d seen enough to know where the mountain men had won the famous Huon pine for nearly a hundred years, after one last look, we turned for the beach and our kayak. After a quick swim to wash in very icy water, followed by a quick lunch, we cast off for our home afloat.

Rapids started right off that beach. I’d had plenty of time to reconnoiter them and decided to shoot them rather than walk around them, and that proved much faster and great fun. It also relieved Jude’s concern. She immediately became enthusiastic to shoot the rapids too. So after that, we shot every one, making swift time home.

We rounded the last bend to Banyandah at 6:30 PM. Exhausted with a creak in my back, Jude’s legs stiff, her bum numb, but happy with our job well done. We had successfully explored a region few dare go and had found remnants from a long ago era, plotting their position for the first time with GPS accuracy.