The fishing’s pretty good way out here in the middle of the ocean, but we seem to be attracting a mean type of fish. Just before lunch, our trolling line gave a twang and Jerome, the first to run aft, hauled in a ten kilogram Dorado with not as much fight as I would have expected from one this size. Why? We found out moments later. 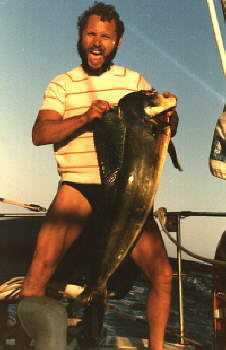 After the usual buzz while the beast was hauled up and pulled out the sea in one powerful motion, in fact not until it lay limp and quite dead in the scuppers did I turned and asked my fourteen year old if he’d like to see what the beast had been eating. At times, dissecting a fish’s tummy can be quite an education. On free roaming fish like this Dorado, we sometimes see bones remaining from digested fish, or maybe the remains of squid. I remember once seeing a seething mass of tiny shrimp in a tuna’s stomach. As it turned out, this investigation proved an even bigger eye opener.

“I wouldn’t expect too much.” Jerome said to me, our prize now on the aft locker lid with the blue of mid-ocean sliding past our work area.

Taking the sharp filleting knife from its sheath and handing it to my son, I replied. “Yeah, poor baby looks like she hasn’t eaten in a week.”

“That’s why she hit our lure.” Jerome’s cute boyish grin spread across his freckled face. “She was desperate!”

Dorado, Mahi Mahi, Dolphin fish; call it what you like, it’s all the same handsome fish of great power. Rather thin and vertically flat, they are pelagic fish that individually and in packs roam the ocean as well as the seas around coral reefs. The bulls have a distinctive squarish forehead, while the females are a rounded shape. Both have button eyes and a small mouth opening straight back for only a short distance, which adds a mean ‘pug-ish’ look. Inside their mouth, top and bottom are a row of small, very sharp teeth. The upper row is attached to a hard flat plate.

It’s this plate that frustrates fisherman because often when the beast strikes the lure, the hook will jab that plate. Sometimes it will hold, sometimes it won’t. We’ve lost more than a few, even had them up on deck when the hook let go. And that’s meant one powerful fish thrashing about, smacking cabin and deck or anyone who tries to contain it. Usually those ones win their freedom.

In addition to their fighting power and fantastic leaps, their appearance is made spectacular by a fin running full length down their back that erects like a sail. Often this sail matches the mood of the sea; a vibrant blue-green in the early morn and late afternoon; a lighter, sky blue around midday. Down from this fin, the Dorado slowly becomes a sea green very alive with tiny dots of bright blue. About halfway down, splashes of gold highlight their pectoral fins and gill covers. 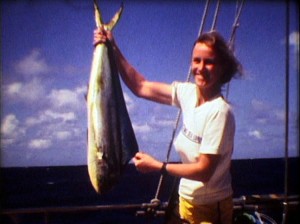 Watching this creature die demonstrated another astonishing fact. They change colours. From deep electric blue through almost all the blue-green combinations to a creamy yellow that eventually turns silver upon death.

Okay, Jerome has the knife, it’s going in and the flesh is being parted exposing the lighter pink colour of her intestinal cavity with her internal organs, long and bunched together, bound by a thin see-through membrane. There is no blood, no unsightly mess. There’s no overpowering smell. It’s all orderly, an intricate creature, a wonder to investigate.

Then when Jerome severed the stomach from the animal’s throat he exclaimed, “Hey, dad! That’s a fish’s tail.”

Suddenly there were two excited guys on Banyandah’s aft deck, and by sliding the elastic skin down, Jerome removed a whole fish about a foot long and intact. Yep, all there except for a gash in its stern area where Mrs. Brute must have first chomped the little guy before swallowing it whole.

Poor little tyke, the stomach juices had already started their work and he’d lost some of his colour. But even so I knew it well, for it was a smaller version of the big lady Jerome had on the chopping board. Crikey! May well have been one of her own… And thinking that, all the ill feelings I may have felt over killing such a beautiful creature left me. And I could only nod when Jerome said with some malice, “Cannibal fish!!”