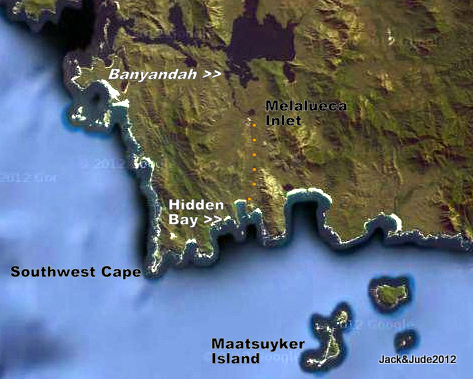 Have you ever been to a place and been so moved by its beauty that you dreamt of escaping there again and again to recapture that sublime moment when Earth’s magic filled you with the hope that our planet can survive the human experience.

Well! We found such a place, almost as far from mankind as one can get and still be on planet Earth.

But to get there we exposed all our treasures to danger because this place has both an angel’s smile and devil’s grin. And while there that brief moment we continuously monitored sea and sky, worried over harbingers of destruction, and thinking that next time we’d march across the deserted land after first leaving Banyandah in a safe haven. Years then drifted by until an opportunity to revisit Tasmania’s far south coast became a reality.

When I last wrote we were speeding away from The Davey River Gorge, rushing Banyandah for the safety of Bathurst Channel to bunker her down against a strong gale that when it struck pelted down marble sized bits of ice. For two days, we stuck well in the thick gooey mud of Frogs Hollow. And when the weather cleared, many visiting vessels hightailed it around the capes to Tasmania’s east coast.

You beauty! That left the jetty at Clayton’s Corner available. And our luck continued when a large high-pressure bubble lingered in The Bight. Not one to look a gift horse in the mouth, we quickly packed our rucksacks, strapped them on top the Green Machine, then after shutting all sea-cocks, Jude and I paddled away on a new adventure, hoping to again experience Earth’s wild beauty. 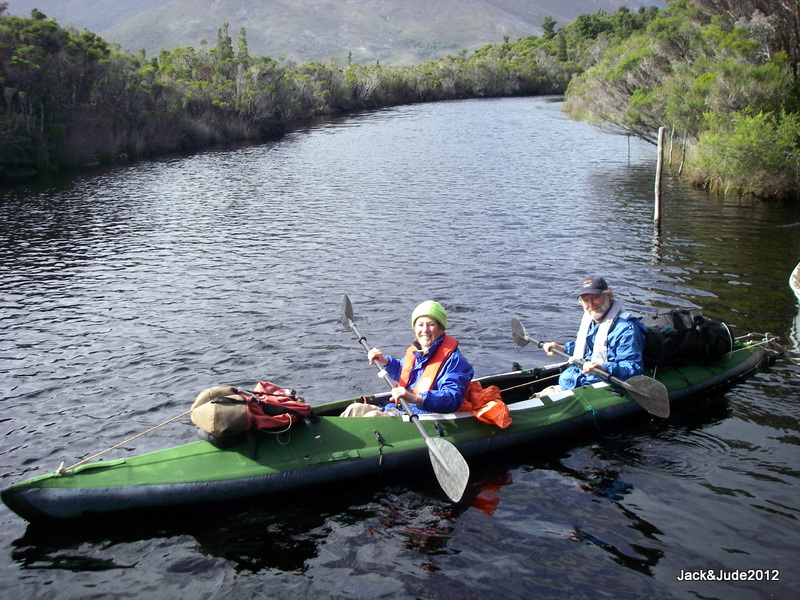 Our journey began when first light landed on Win and Clyde’s historical tin roof, the one shifted from Bond Bay after their ten years hard living, isolated, the furthest southwest of any Australian. Pretending we were in Deny King’s ‘blue boat’ and remembering his life, we paddled the five miles up Melaleuca Inlet and through the lagoon into Moth Creek taking two hours. The day before, two Friends of Melaleuca had visited and when discussing our plans, they suggested using Deny King’s old derrick to remove our Green Machine from the waters of Moth Creek.

Eventually we found ourselves loaded with backpacks, on the same boardwalk that takes walkers across flat buttongrass plains to the arduous south coast track. After an hour of absolutely nothing manmade in sight, at the crossroads we changed direction for the notorious Southwest Cape. Bounding our horizons, abrupt mountains lay bare except for the ubiquitous yellow green buttongrass spread evenly over every bump. This wet southwest averages 249 rain days a year so underfoot can be muddy mush, and the tiniest crease can become a raging creek. 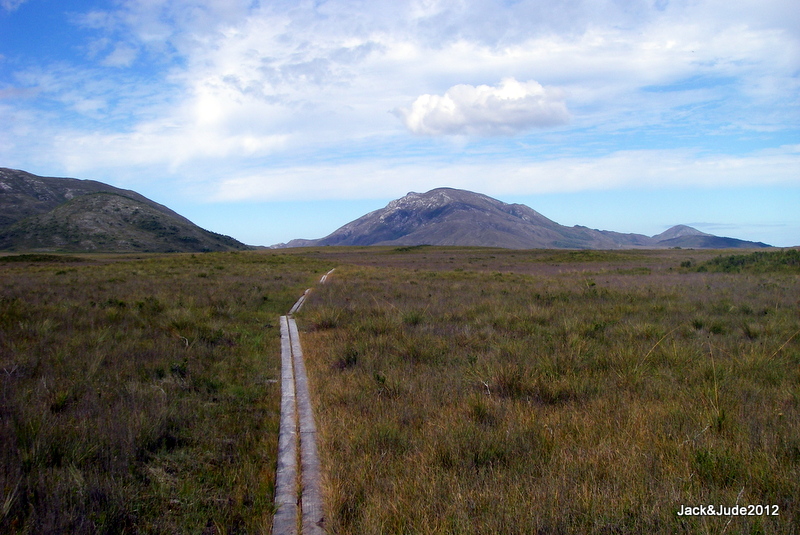 In years gone by, fires from Signal Hill signalled a rare mail delivery. But on this day, no smoke clouded the heavens as we plodded through mud and slush, dodging the deeper pools only to slip a boot under at the next creek.

With waning energy and lessening enthusiasm, it became hard yakka to negotiate the last hill down through lush mossy rainforest, emerging to view small surf breaking on a vacant beige beach slashed by a deep black stream oozing from the buttongrass plains. Jude, lugging a 15-kilo load, looked dismayed to have to wade across that obstacle for a place to camp. 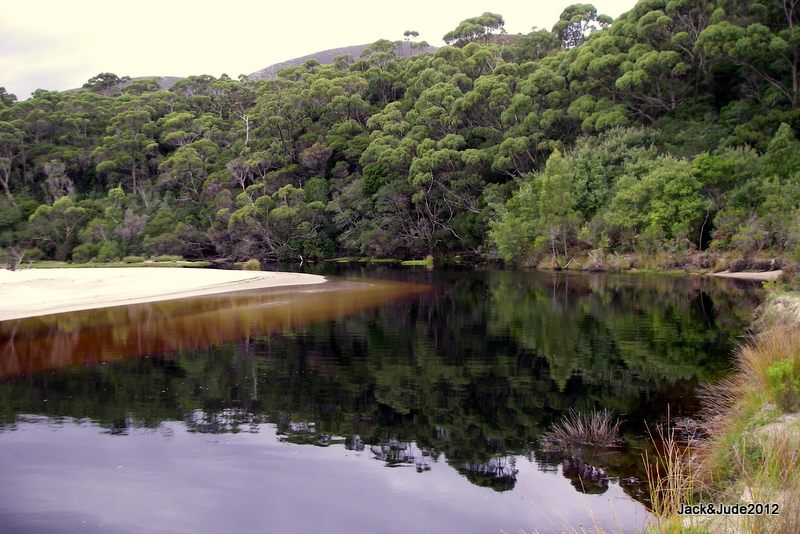 Then voices ahead urged us to follow the creek, now appearing like a silver ribbon, until we were amazed to spy a set camp in a clearing under myrtle trees. Moments later we were thrilled to be meeting Deny King’s daughter, Janet Fenton and husband Geoff along with two friends, and have an invitation to join their camp. Once established, we wandered from under the canopy as the setting sun cast red flames down upon the meandering silver, while from behind the hills, pink primrose and golden rays shot up into the heavens.

Needless to say we slept like two zombies, drifting off into a world where purple mushrooms talked and towering swamp gums walked. Opening our eyes after what seemed seconds found the dim light of next day. Thick fog swirled about, and we thought ourselves still dreaming until we heard Janet’s voice calling us to a wonderful photo opportunity. Supercharged by those words, my lady jumped out her sleeping bag while reaching for her cameras. Hardly a step behind, I had the video purring, capturing wispy mist swirling along the dark creek, where in shadows at the base of those hills lurked the monsters seen in our dreams, and they seemed to be moving towards us through swirling mist.

A golden orb burnt away that mist, revealing a glorious blue ocean extending unobstructed to the far South Pole, except for tiny Maatsuyker, Australia’s southernmost continental shelf island named in 1642 by Dutch explorer Abel Tasman. Across that narrow gap some of the world’s most powerful seas can be generated by winds sometimes gusting 100 knots. 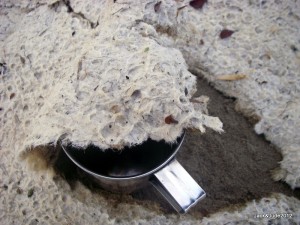 Standing on this exposed beach at New Harbour, as we had done a few years earlier, we again observed a strange phenomenon. Each swell was turning from white to pink, then red as it peaked. And I remembered the clumps of red gelatinous material floating about Banyandah on our first visit, and soon cast my eyes on the felt-like blanket dried on the beach. Janet remembers always seeing it here, even in her childhood. But not on any other South Coast beach. 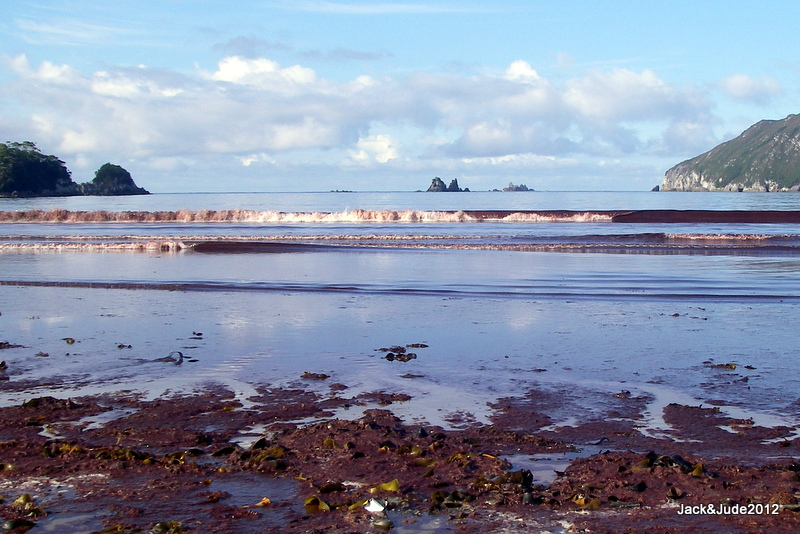 Janet Fenton’s party hiked out mid-morning and shortly after Jude and I hefted rucksacks to continue over the next ridge into Hidden Bay. Up we climbed through even lusher greens now dripping with morning dew that sparkled in the hot morning light. Then magically after a stiff slog, we emerged into completely open spaces, the view snatching away our gasping breath. The purest colours of Nature had our cameras whipped out to capture that oddity of blue turning pink then red. From that high vantage point we could see great clouds of a rose bloom discolouring the bay and we wondered why just there! 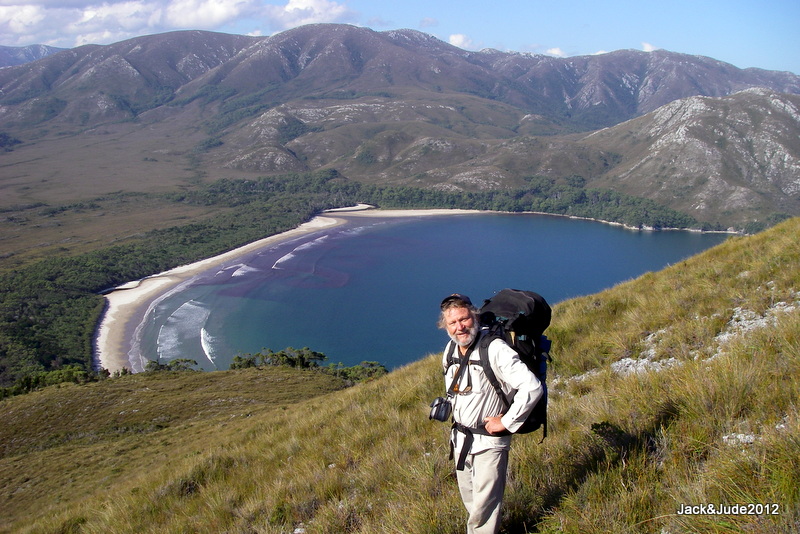 That day we left behind the last of Earth as it’s known to enter a very private domain. Upon a trail without footprints, we forged through a littoral rainforest then down a sand hill to a bay where large foaming breakers smashed into cliffs of white granite, the noise shaking the earth as we strolled towards a rivulet flowing out between twin sand mounts that then crossed the beach. Following that waterway into the forest we found a mini-bit of paradise lost. By that creek a brilliant white sand strip entered an open tea tree forest neatly carpeted in leaf mulch, perfect for our camp. Protected from the wind, birds sang in the forest as we gazed upon a wide-open vista just a step away from drinking water that had me thinking a hermit could happily live here forever. 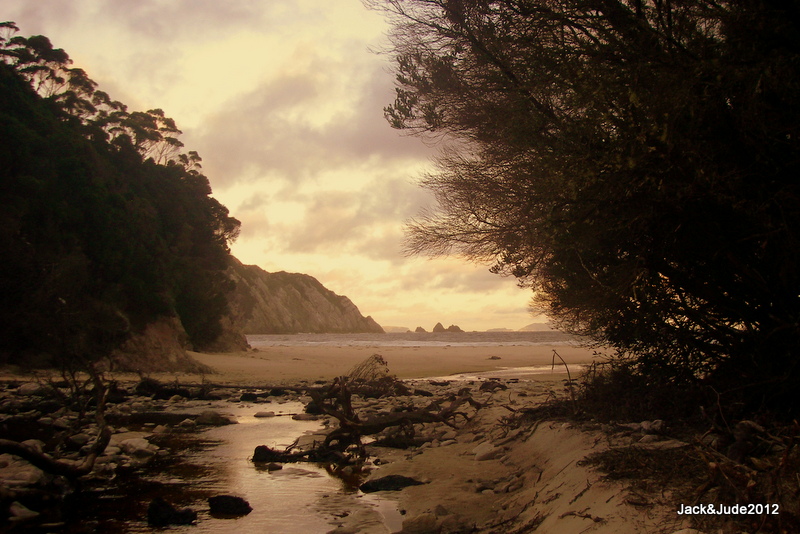 After setting up camp we set off exploring our Hidden Bay and immediately grabbing our attention were tiny footprints loping across the smooth sand. Tiny toes with sharp nails were laid down in a pattern indicating the creature didn’t hop. Later we had the joy of sighting a Tiger Cat, its long thin tail half again that of its body.

I could fill pages on the charms of this remote spot, but moving on; the next day we scaled the ridge separating Hidden Bay from New Harbour. Leaving the rough track to chance finding a way to the ridge through scrub and buttongrass proved a brilliant move, but not something you’d do unless experienced bushmen. Climbing steeply, our cumbersome rucksacks held us back, so it was fortunate we soon found the remnant of a long disused track. Who knows! Perhaps one used by Deny and his dorts. The track wound up past a small waterfall, then breasting the ridge a long held dream was fulfilled when our gaze fell upon the spectacular view across both bays, silky smooth and domed by an eternity of cerulean blue, the colour of peace.

Like fingers tracing a map, our eyes followed a coastline rarely visited, sighting first New Harbour rocks – bold, craggy, looking dangerous, obstructing the entrance to our first camping bay. And as we gazed, our mind’s eye could see Win and Clyde, once trapped inside that bay by gale formed combers that forced them to abandon their small fishing craft and jump into storm seas, no doubt praying to their maker.

All those who challenge the elements know the wildness of Nature can easily snuff out life’s breath. But to risk life is necessary to gain the full experience of ones short time on this amazing planet. Be it on land or sea, take precautions, remembering no matter what, there’s always risk. Slip off your ship or trip on a loose stone, both might end in a fatal fall. Struggle up hills or do battle with heavy weather might burst something internal. For Jude and I, that’s no reason to become a couch potato. Life is for living til the very last breath. It’s the opportunity to witness the creation. And if there is a God, surely he’d be pleased if we don’t muck it up.