Producers of beef cattle, dairy, grain, lambs and vegetables signed the open letter to the conference in Melbourne, urging the Federal Government to take a strong policy of emission cut to climate change talks in Paris this year. In an open letter to the Liberal Party ahead of this weekend’s national conference, a group of farmers say climate change is real and happening on their farms.

The letter says: “We as Aussie farmers call on the Liberal Party conference to reject the motion put by the regional and rural committee of the Liberal Party questioning the basis of climate science, and instead call for post-2020 targets to cut carbon pollution that are in line with scientists’ recommendations of at least 40 per cent by 2025, and at least 60 per cent by 2030 over 2000 pollution levels.”

You might think twice before tossing a piece of plastic into the garbage rather than a recycling bin when you hear how deadly marine debris, such as floating plastic, is to whales, dolphins and other sea creatures.

According to a 2014 report published in the journal Marine Pollution Bulletin, ingestion of trash has been documented in
56 percent of cetacean species, with rates of ingestion as high as 31 percent in some populations. Bottlenose dolphins and various species of whales are also common victims of marine debris.

Their numbers are still increasing

Despite all efforts to control them, European Carp make up a staggering 90 percent of fish in the Murray Darling basin. Carp cause significant damage to aquatic plants and increase water turbidity, negatively impacting native aquatic fauna, habitat and ecosystems.

Nature isn’t always pretty. This brute was fine when it lived in a few streams. Now widespread throughout the world it devours everything, multiples voraciously, and undermines river banks. In plague proportions in Australia’s Murray River Basin, scientist hope they have a specie specific herpes that will destroy it. Meanwhile it has replaced 90% of all the other creatures, and who’s to know if the cure might not be worse than the brute were attacking.

Maybe if we farm these creatures in mud free habitats, they can replace the Bigeye Tuna that are rapidly racing to extinction……
Food for Thought,  or is that Thought for Food

The effectiveness of the fishing watchdog in lucrative Pacific island waters was under scrutiny Saturday after talks aimed at protecting the region’s valuable tuna stocks ended in a stalemate.

A group of island nations including Samoa and Palau want the commission, which polices fishing in the region, to establish strict catch limits for bigeye tuna, one of the most sought after species for sushi restaurants in Asia, America and Europe.

However, despite reports indicating bigeye stocks were down to 16 per cent of their historic high, conservation measures appear to have been blocked by the so-called “distant water nations” from as far afield as Europe, China, the United States, South Korea, Japan and Taiwan.

Tuna Stocks on Brink of Disaster

He just doesn’t get it!

PM wants Earth to be scorched by burning fossil fuels till end of century. While our two largest trading partners are ramping up renewable energy research and manufacture, Tony Abbott has brought in a 70% reduction in Australian development. He’s a dinosaur who wants Earth to be scorched by burning fossil fuels till the end of the century. He just doesn’t understand that changing emphasis to renewables would create a massive number of new jobs in addition to helping planet Earth and secure a future for our grandchildren. Crikey! Can’t imagine what another 86 years of burning coal for power will do to the CO2 levels – I can only imagine in his drive for export dollars, Abbott must think we’ll either bury the climate change gases, or we’ll find a miracle cure. Talk about bad risk management. Standing on the precipice of huge climate change, he’s willing to gamble our children future, when the alternative would develop a whole new industry.

The good news story globally is that China consolidated its position as the world’s renewable energy powerhouse in the past year with 2.6 million people employed in renewable energy jobs and renewables providing nearly one fifth of China’s annual electricity generation.

China installed more renewable energy capacity than fossil fuels in 2013. It also retired 77 gigawatts (GW) of coal power stations between 2006 and 2010 and aims to retire a further 20 GW by 2015.

Read the Report
The Climate Council has issued a report comparing Australia’s action on climate change to the rest of the world in regard to reducing emissions and renewable energy, including the actions taken by some of the world’s largest economies such as China, the US and EU.

The world’s top scientists have given their clearest warning yet of the severe and irreversible impacts of climate change.

The United Nations Intergovernmental Panel on Climate Change (IPCC) warns greenhouse gas levels are at their highest they have been in 800,000 years, with recent increases mostly due to the burning of fossil fuels.

“Continued emission of greenhouse gases will cause further warming and long-lasting changes in all components of the climate system, increasing the likelihood of severe, pervasive and irreversible impacts for people and ecosystems,” the report said.

Too Conservative –
Dr Terry Leahy, a University of Newcastle sociologist, has criticised the latest global report on the threat of climate change for not doing enough to highlight the problem.

“The statement that we have to eliminate coal by the end of the century is a massively conservative statement and really understates the problem.”

Dr Leahy said 86 more years of coal is a very unrealistic estimate, and the Hunter region’s economy needs to transition. “It’s a huge problem for residents of the Hunter who have jobs in the coal industry,” he said.

Close Worst Polluting Power Plants –
Australia’s energy system is using more coal than ever. While demand for electricity is falling, the carbon emissions from its generation have been steadily rising since June.

In the electricity market, Victoria’s brown coal power stations are back on top, reaping the rewards of higher gas prices, an end to the carbon tax and the subsequent fall in hydro-electricity production.

PM Abbott,  An Enemy of the Environment? –
Prime Minister Tony Abbott says coal is “good for humanity” and will be the “world’s main energy source for decades to come” as he opened a new $3.9 billion coal mine in central Queensland.

The BHP Billiton Mitsubishi Alliance (BMA) said the new mine, the company’s eighth in the region, would produce about 5.5 million tonnes of coal each year.

It’s hard to pin down exactly what prime minister Tony Abbott really believes on climate change, but his policies could only have been developed by someone who believes global warming is a hoax. In October 2009 he said, “The argument [on climate change] is absolute crap… however, the politics of this are tough for us. 80 per cent of people believe climate change is a real and present danger.”

Abbott still vacillates between repeating denialist talking points and more moderate statements accepting the reality of climate change. For example after meeting with Barack Obama on 13 June, Abbott said in an ABC radio interview that “I regard myself as a conservationist”, yet later that day he fronted an audience in Texas to laud the unrestrained burning of fossil fuels. “Australia should be an affordable energy superpower, using nature’s gifts to the benefit of our own people and the wider world…. we don’t believe in ostracizing any particular fuel and we don’t believe in harming economic growth. Energy consumption defines prosperity.”

Sea Change:
The Ecological Disaster That Nobody Sees

Jack and Jude have been witnessing this ecological disaster increase rapidly during our lifetime afloat upon the world’s oceans. Now experts warn that we are currently facing an extinction event in the oceans which may rival the “Great Death” of the Permian age 250 million years ago, when 95 percent of marine species died out due to a combination of warming, acidification, loss of oxygen and habitat – all conditions that are rife today.

Within the past half century the oceans have been transformed from the planet’s most productive bioregion into arguably its most abused and critically endangered. That is the conclusion of a report issued earlier this summer by the Global Ocean Commission, a private think tank consisting of marine scientists, diplomats and business people, which makes policy recommendations to governments.

The report catalogues a grim laundry list of environmental ills. Commercial fish stocks worldwide are being overexploited and are close to collapse; coral reefs are dying due to ocean acidification – and may be gone by midcentury; vast dead zones are proliferating in the Baltic and the Gulf of Mexico caused by an influx of nitrogen and phosphorous from petroleum-based fertilizers; non-biodegradable plastic trash – everything from tiny micro-plastic beads to plastic bags and discarded fishing gear – is choking many coastal nurseries where fish spawn; and increased oil and gas drilling in deep waters is spewing pollution and posing the risk of catastrophic spills like the Deepwater Horizon disaster which dumped an estimated 4.2 million barrels of petroleum into the Gulf of Mexico during a five-month period in 2010.

Yet these worrying trends have failed to spark public indignation. It may be a matter of “out of sight, out of mind.” [More] 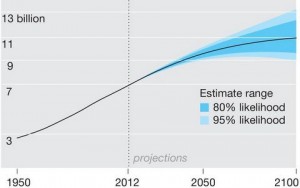 In a paper published Thursday in Science, demographers from several universities and the United Nations Population Division conclude that instead of leveling off in the second half of the 21st century, as the UN predicted less than a decade ago, the world’s population will continue to grow beyond 2100.

Jack and Jude say that this is by far the most disturbing report in all of the news. Our population generates all the wastes presently endangering Earth, it accounts for the immense decline in species, and our burgeoning need for resources is stripping the wild kingdom, replacing it with highways and larger cities. Tackling our population explosion is by far our greatest challenge ever.