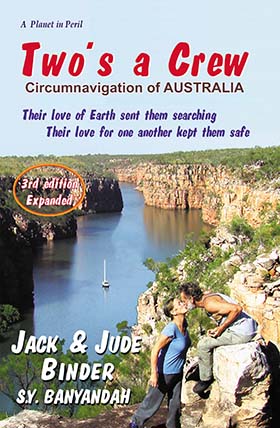 One of the world’s greatest adventures – Following Flinders wake around Australia – 9,000 nautical miles across six climatic zones. Jack and Jude have been exploring Earth for more than 40 years and in Two’s a Crew we search our homeland of Australia comparing it with what we had seen on early travels. Our homemade yacht takes us through crocodile-infested waters to some of the world’s oldest rock paintings, into pristine coral atolls, and through Hell’s Gates itself.

“I love your evocative descriptive passages. Judith’s presence is felt throughout, sharing the same strength, courage and love of the wild as her man.”

I really enjoyed Two’s a Crew. Having had a taste of the cruising life I really related to all the boatie challenges, joys, and concerns, though I think readers who have never spent any time cruising but yearn to, would enjoy it as well. As a memoir and travelogue, it succeeded and certainly champions we “mature adventurers”.
I particularly liked the historical background you give of the places you visited, and the commentary on the natural history as well.
Linda Collison, Author of Star-Crossed, and Rocky Mountain

Banyandah, a home on the water
Back in 1969 when Jack and Judith first arrived in the sunburnt country, there was space everywhere with a feeling of ‘she’ll be right’ that encouraged us to not only start a family but to also start the construction of a 12 metre sailing yacht. Three years of really hard work saw Banyandah, which means “home on the water” come alive. Our sons were walking by then so we grabbed the dream of sharing nature and adventure with our children before what seemed mandatory school years.

Around the world touching eighty countries

Jason was three, Jerome just two when the Four J’s began a journey into the unknown with little sailing experience. Frightened and unsure, there were mountainous obstacles to overcome while our sea roving life took us around the world, touching eighty countries in an odyssey that lasted not the one year imagined, but the next fifteen.

“Great reading! Felt I was experiencing some of the world beautiful places. Also learnt something about sailing and decisions one has to make to be safe.”
Graham Swannell – Head of Design Aeronautical Engineers Australia

Grandchildren now
But that was then. Life has moved on. Jack and Jude are grandparents now. Our physical forms have weakened, our confidence has been tempered, but we’ve always heard the call of the wild beckoning us to again witness Nature in all her glory.

“Unfortunately I’ve finished reading your book. Because it was a bloody good read!
When does the next one come out?” Petrea Heathwood – Cruising Helmsman Magazine

A planet in peril
The industrial revolution has seen humans increasingly dominate the wild kingdom, upsetting the balance of Nature. And while no one would deny the improvements enjoyed today, Jack and Jude often wonder if man’s growing impact isn’t robbing all Earth’s creatures of a better life.

“Pearls of wisdom for motivation! Absolutely loved your book, a favourite on my bookshelf.” Rosemary Bartle, Darwin

A good read
While exploring this ancient country so harsh and yet filled with mysteries that still baffle the greatest minds, Jack and Jude have written stories peppered with historical notes woven into the fabric of two grandparents alone, manning a powerful sailing craft through some of the world’s most dangerous waters. These became the mainstay of our first book:

This narrative of lives well lived is highly recommended.Two’s a Crew is a cruising narrative by Jack and Jude Binder of their circumnavigation of Australia between February 2007 and June 2009. As they say in their first chapter, the story really starts many years before.Having met while back-packing around Europe, they married in England before setting off in a VW van to travel through Africa. On arrival in Australia in 1969 they set about building Banyandah, a 12m ferrocement yacht. By the time of the launch three years later the family had grown to include two sons under the age of four with whom they began a fifteen year odyssey exploring the world by sea. Banyandah then spent as many years on their front lawn before the decision was made to re-experience the pleasures of the cruising life by ‘following in the wakes of Flinders and King’.The voyage starts and finishes at Ballina on the NSW north coast and proceeds anticlockwise with the highlights being on the WA northwest and Tasmania’s southwest coasts.The principle voice of the book comes from Jack Binder through which his affection for his wife and his love of the planet are never in doubt. Although the story of the cruising adventure is always the main focus there are short philosophical digressions which display a constant thread of wonder and amazement in the natural world about them, as well as a fear for its future.

Comments and Reviews of our Books ~ 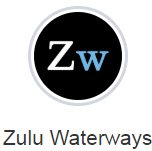 TWO’S A CREW
The book is fantastic. So well written and a perfect balance between sailing details and historic notes and written with a raw honesty which is so essential for a Cruising book.
Niki and Lauren at ZULU Waterways

We both have now read Where Wild Winds Blow.
The history of aboriginals saddens us but good to learn.
You have encouraged us to Put Nature First.
A good approach to life. Thanks

Two’s A Crew is a fantastic book that warrants a second and third read. Chock full of tips and hints for the not so experienced, history woven through in an interesting way, and a great story. Sailing story, love story, history, travel – what more could a reader want?

He raves about your books to anyone who will listen 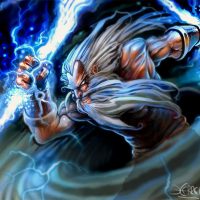 Jeffery from South Australia wrote, Absolutely loved your books, felt like I sailed along with you and experienced every adventure with the same views about the environment.
I’ve sent both your books to my elderly father (85) who spent the majority of his life on the River Murray and was always around boats. He’s now in an aged care home. Regardless he is a tough critic but raves about your books endlessly to anyone who will listen.

You guys are amazing!
My partner and I are building a boat and found your voyage under Australia to be so inspiring. Quite clearly you told us about the importance of having routines in place, who does what, what to watch for. We purchased all three of your books and reading them has given our confidence a big boost. Thank you.

Where Wild Winds Blow.It’s a great read!
I was surprised that I couldn’t put it down for I had already followed you on your blog.
The historical notes are always very interesting and I loved how you included stories from your past sailing adventures too.
You both have a wonderful and infectious sense of adventure. Thank you!

Oh my god, you two are brilliant. It is strange having read this ‘chapter’ of your life and knowing that much about such a brave and loved up couple. Thank you for sharing the stories.
Chief Investigator
Marulu – The Lililwan Project 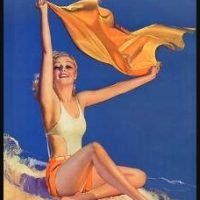 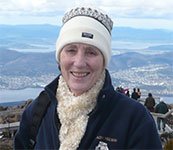 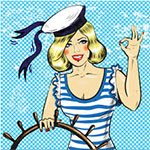 I just want to say that the world needs more people like you and thank you for sharing your stories. We hope to be “guided” through our adventures by you both. All the best to you and yours, Diane 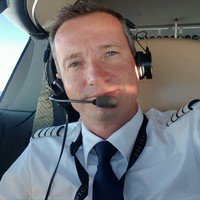 I’m halfway through the book about your circumnavigation of Australia and I’m loving it.
I actually just ordered the DVD to enjoy the footage. 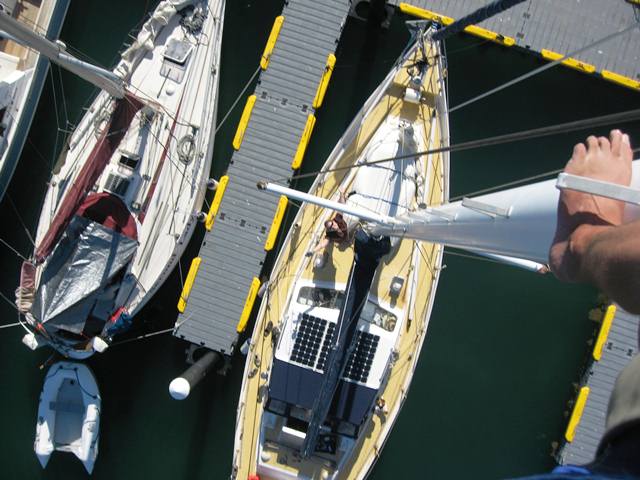 If you do not follow their blog, I suggest you subscribe.
Alongside Alan and Pat Lucas, if ever there was a couple like Lin and Larry residing in Australia then Jack and Jude would have to be it.
Phil Ross Editor

Thanks for the copy of Around the World. I’ve been saving it for when I could read in the daytime because I suspected it would not be good to read it in bed. And so it proved. I have been reading it at night, and it is keeping me awake. I keep wanting to know what happened next, so continue turning the virtual pages long after the light should be out.
I’m only about halfway through, as I am rationing it to nights when the boat is rolling and I can’t sleep anyway.
So far? Amazing!