Counting the Costs of Climate Change Professor Glenn Hurry said bluefin and bigeye tuna should no longer be harvested as stocks were dangerously depleted. He also warned “serious action” needed to be taken to reduce the yellowfin tuna catch.

Jack and Jude have fished the oceans of the world since 1974 and know first hand that our fish stocks have been severely depleted. “Quite simply there are too many mouths to feed,” says Jack. “Today we are far too advanced in technology for the fish to hid from our factory ships.”  Professor Hurry has warned an international agreement is urgently needed to avert disaster for the tuna industry.

“Yellowfin tuna’s down to about 38 per cent of its original spawning biomass,” said Professor Hurry. “Bigeye tuna’s down now to about 16 per cent…. in a well-managed fishery you’d actually stop fishing on that and begin to rebuild the stocks.”

Professor Hurry said the situation for bluefin tuna was even more dire with the Pacific population at “3 or 4 per cent of its original spawning biomass.”

Human need, helped by human greed and the fact that we are not a cohesive unit with sensible regulations in place is decimating the wild kingdom is what Jack and Jude think. You can help. Talk to your children and explain why we are out of control for it is their future that is in jeopardy.

The toxic algae bloom in Lake Erie that provoked last weekend’s tap water ban in Toledo, Ohio—where nearly half a million people were told not to use water for drinking, cooking, or bathing—is a preview of similar problems to come around the world, scientists say, thanks in part to climate change.

Northwest Ohio’s water ban was lifted Monday morning, but experts say harmful algal blooms that can turn tap water toxic and kill wildlife are becoming more common in coastal oceans and in freshwater across the United States and around the globe.

Beijing to ban coal use to curb pollution

Beijing will ban coal use in its six main districts by the end of 2020, state media cited the Beijing Municipal Environmental Protection Bureau as saying, as the Chinese capital steps up efforts to combat air pollution.

Beijing and the surrounding area in China’s northeast is often wreathed in noxious smog, which has been cited as a factor in high rates of lung cancer.

In 2012, coal made up one-quarter of the city’s total energy consumption, Xinhua quoted official statistics as saying.

Fuel oil, petroleum coke, combustible waste and some biomass fuels will also be prohibited as part of the effort to fight pollution, Xinhua said.

Stories that deserve more media coverage in the USA

According to Christian Christensen,

The vast expanses of rainforest that make up the Amazon Basin have been called the lungs of the planet, as they breathe in carbon dioxide and release oxygen. Now, findings from biweekly airplane flights over the jungle show how a severe drought choked these lungs, constricting the uptake of carbon dioxide, a greenhouse gas. Worse, fires released tremendous amounts of carbon into the atmosphere, exacerbating global warming.

Not just one of the greatest ever environmental threats to Australia,

Its climate implications are global.

Advanced plans are in place to build nine mega mines in one region of Queensland, Australia. Located in the Galilee Basin, five of these projects would each be larger than any coal mine currently operating in the country. The Galilee Basin coal mines will produce more coal than Australia currently exports, equating to 700 million tonnes of carbon pollution a year. This is greater than the total emissions from the United Kingdom.

A very good report to read:

Cooking the Climate – Wrecking the Reef

Abbot Point coal port approval signals the Coalition government’s industrialization of one of the most beautiful and fragile ecosystems on Earth. A combination of four terminals will ship an additional 190 million tonnes of coal every year for decades to come. It means continuously loading coal onto 1500 ships inside the Great Barrier Reef every year. Environment Minister Greg Hunt has given the project approval to dump 3 million tonnes of dredging waste in the ocean. That’s equivalent to 150,000 dump trucks, lined up bumper to bumper from Brisbane to Melbourne, tipping waste into the ocean.

“Mining activities presented a greater threat to the reef than agriculture,”

”Farmers are going to be asked to save the reef when port authorities and climate change managers are doing nothing,” he said. ”It puts it all back on farmers.” Agricultural activity within the Great Barrier Reef catchment area, such as beef grazing and farming releases sediment, chemical and fertiliser run-off. This is discharged from rivers into the sea. However, Mr Brodie said the damage from the expansion of ports, including dredging sediments contaminated with heavy metals, could prove a greater threat to the health of the reef because – unlike run-off from agriculture – port development was occurring without any transparent and productive management of the risks. The area off Abbot Point, where 3-million cubic metres of seabed will be dredged and dumped as part of the expansion, is near marine habitats, such as coral reefs and seagrass meadows that provide shelter and food for fish, turtles and dugongs. Cloudy water reduces the reach of sunlight that corals and seagrasses need for growth.

“The Abbott Government has sacrificed the climate and the Great Barrier Reef for overseas mining companies with its approval today of the world’s largest coal port and another CSG plant in our Great Barrier Reef,” said Queensland Greens Senator Larissa Waters.

SYDNEY, AUSTRALIA—The Australian agency tasked with managing the Great Barrier Reef has authorized what amounts to an experiment opposed by many scientists: how the iconic ecosystem will respond to mountains of sludge dumped into the waters between the reef and the Australian mainland. On Friday, the federal Marine Park Authority paved the way for development of one of the world’s largest coal ports by approving the dumping of up to 3 million cubic meters of dredge spoils inside the UNESCO World Heritage Site.

BEIJING—China’s relaxation of its one-child policy, announced last week, is unlikely to spark a baby boom. But it may be a steppingstone to a bigger change that influences when the nation’s population peaks—a milestone with major ramifications for food security. Writes Yadan Ouyang of The Economist from Beijing. The government announced on 15 November that it will allow Chinese couples to have two children if one spouse is an only child. Exceptions to the one-child rule already exist for ethnic minorities, rural families without boys, and couples in which both parents are only children. But Chinese demographers have long called for wider changes, arguing that the decades-old policy has contributed to a series of social problems, such as the country’s aging population, gender imbalance, and labor shortages. Official statistics show that China’s fertility rate has dropped from 2.86 in 1982 to about 1.5 to 1.6 births per woman now. The new policy could affect millions of lives, but demographers and policymakers believe it won’t have a significant impact on China’s current demographic reality. The policy will allow up to 12 million women of reproductive age in China to have a second child, according to estimates by Wang Guangzhou, a demographer at the Chinese Academy of Social Sciences. In a study published in the Chinese journal Sociological Studies in September 2012, Wang and his colleagues estimate that the new policy, if carried out nationwide in 2015, could lead to 1 million to 2 million additional births a year, on top of the 15 million births a year at present. The team also forecast that under the change, China’s total population would peak at 1.4 billion by 2029 and decline to 1.3 billion by 2050. 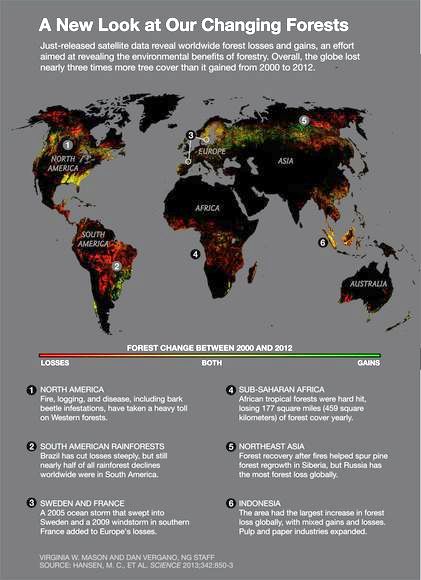 Nov. 14, 2013 — A University of Maryland-led, multi-organizational team has created the first high-resolution global map of forest extent, loss and gain. This resource greatly improves the ability to understand human and naturally-induced forest changes and the local to global implications of these changes on environmental, economic and other natural and societal systems, members of the team say.

In a new study, the team of 15 university, Google and government researchers reports a global loss of 2.3 million square kilometers (888,000 square miles) of forest between 2000 and 2012 and a gain of 800,000 square kilometers (309,000 square miles) of new forest. Their study, published online on November 14 in the journal Science, documents the new database, including a number of key findings on global forest change. For example, the tropics were the only climate domain to exhibit a trend, with forest loss increasing by 2,101 square kilometers (811 square miles) per year. Brazil’s well-documented reduction in deforestation during the last decade was more than offset by increasing forest loss in Indonesia, Malaysia, Paraguay, Bolivia, Zambia, Angola and elsewhere. Full Report Here