Investigator Islands
Facing the Great Southern Ocean, this remote outpost for Nature seemed to beg to be investigated and so we planned to anchor there overnight if conditions allowed. Lying 55 miles west of Esperance, and 15 miles from the mainland, the Investigator Islands, originally called Rocky Isles and then renamed to honour Flinders’ ship, are no more than two gigantic granite boulders rising out tempestuous seas.

When  first sight ten miles ahead, we were in seventh heaven flying a full main with headsail poled out, both filled by a gentle breeze, our first since leaving Adelaide eight weeks earlier. Gazing at the approaching humps gaining colour and taking shape, Jack was on the aft deck cleaning a recently caught two-meal tuna while Jude prayed the mild swell would not have much affect in the bay trapped between the islands.

These islets are the furthest west in the Recherche Archipelago, which contains many areas not surveyed. Therefore, on full alert and using our chart only as a guide, we sailed into a bay surrounded by rising granite islets after first skirting the shallow patch off its head. With extreme caution, we edged in, expecting the bottom to rise suddenly. Looking about, we saw no sand beaches. Just steep bare rock, so it did not surprise us to have to sink our anchor into great depths.

Once settled, our next look found sea-lions loitering on the rock slopes. But we didn’t mind being too late to row around. In half an hour, the sun would melt to liquid gold behind black rock, providing heaps to enjoy from our floating home. And so, we watched a group of NZ fur seals cavorting in the rocky gap between the two islands, their dark shapes contrasting starkly against the white breaking southern ocean swells seething with foam. Through binoculars, their dripping wet coats reflected the miraculous glow of the golden sun across which sea-birds were flying home.

Life is in abundance – or is it? For an outpost of Nature our experience says there should be more. Memories of dark clouds that became seabirds are replaced by visions of a dotted presence, and sea lions as far as the eye can see replaced by peppercorns scattered here and there. Who took away God’s creatures? Was it global warming? Or did man take their food?

Gently rocked to sleep, then awakened by intensified wind gusts through the gap between the islets, we eventually slept well before early yelps of seal pups demanding a feed dragged us from our bed. Our radio forecast light winds to increase after lunch, and with shafts of sunlight already peeking through the morning cloud, we quickly moved to launch Little Red. Expecting to land, we packed shore gear, but our first two attempts had to be aborted. One time, Jack got both feet out of the dinghy only to stand on such slippery sloping rock, he didn’t dare let go. No choice but to jump back in before a swell swept the dinghy back into the bay. Lucky for him. 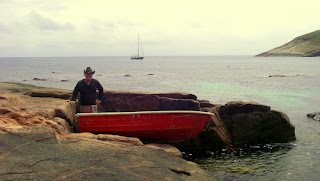 But we got ashore. Jack had seen a nick behind a large rock and chanced rowing on a surge over a rock shelf that ended in a perfect harbour hardly bigger than Little Red. Off its stern we scrambled onto a very flat, dry rock standing knee height above the water, and then hauled Little Red up after us.

First orientation, we looked around, got our bearings, noting what’s close at hand.  Two bulls not far away were giving each other stick and their land-lumbering bodies looked as if they could cause damage. Not a good idea to catch one by surprise. During our sortie, with some apprehension we carefully checked behind each rock as we passed. Three or four were curious, or territorial enough to have us back away and allow them their space. And while one mum was taking time off to bathe in an elevated pool, we surprised her pup, unintentionally, and he screamed a frightened yelp from a ledge away from her. Both looked very healthy animals and we hoped they’d stay that way. This is something which plays on our minds, the going ashore on these isolated islands rarely stepped upon.

Apart from sitting atop the island’s summit to watch Bridled Terns soaring about we touched little and did nothing that could interfere with the islands’ integrity. By sitting still, the terns were soon landing beside us to shelter in the overhang. How great to see them at eye-level just a few feet in front, or on the wind floating like feathers. Down nearer sea-level a flock of Crested-Terns preferred to rest on the smooth granite, and in the far distance a pair of sea-eagles soared above the island on the upswept wind. While watching, one swooped and caught a tern. Then it flew off, each talon clutching a wing, its prey facing forward making it look just like a bi-plane.

Below the islands’ granite tops, in shelter from the worst weather, a thick mat of orange through amber to yellow, pink and green grape-like succulents abounded in delicate purple flowers. These islands have no other vegetation.

So lovely and unique, and filled with the majesty of nature, we spent the full day observing the other creatures live their life, which confirmed yet again that they do pretty much the same as us. Care for their young, find food, investigate life. What joy that brought us. We are one, the wild ones and us. Each wanting the same thing. A future for our kids, and time to observe and enjoy this magical creation. 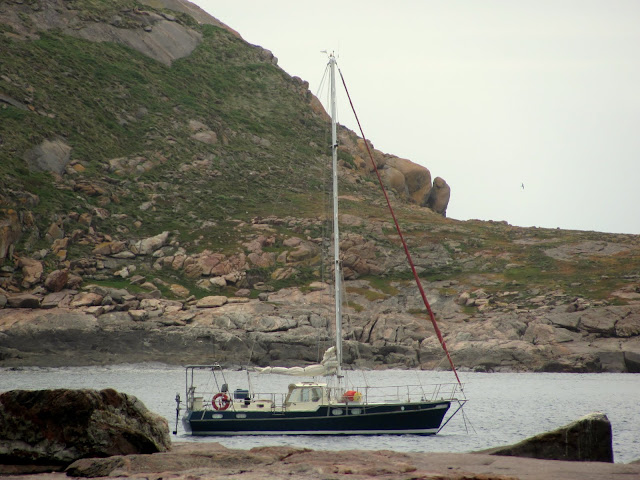 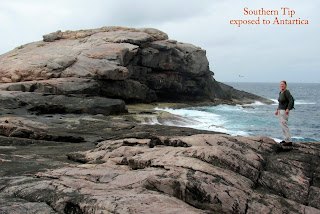 During winter gales, the sea washes straight over this low shelf. Jude would be in grave danger there. 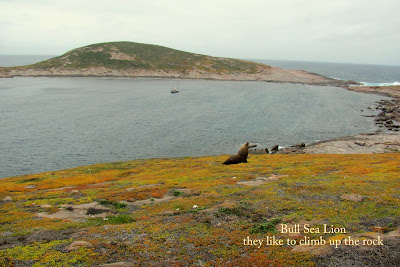 There is no soil on these rocks, no shrubs grow, no trees, only a colourful succulent can withstand such harsh conditions. Here an old bull, probably another outcast, has taken residence up near the top of the hill.