In 1642, Abel Tasman may have been the first to sight the Port Davey inlet, but his chart shows a smooth coastline. Now wind the clock forward a hundred fifty years, Matthew Flinders along with his friend George Bass set sail aboard the tiny Norfolk to prove Tasmania was indeed an island. Approaching two rounded hills, a strengthening southwester had timber blocks groaning in tune to the flap of flaxen sails while the two lads exchanged broad smiles. The stouter, his hair having pulled free from its tie lets it fly as their frail craft is driven further into the icy Southern Ocean. Both agree the storm has yet to reach its peak and look ahead to what appears to be white teeth erupting from turbulent water. Shaped like the teeth of seals they’ve seen basking on the beaches, those islets rise higher than the Norfolk’s mast and beyond them, they perceive, “the appearance of a considerable opening.” 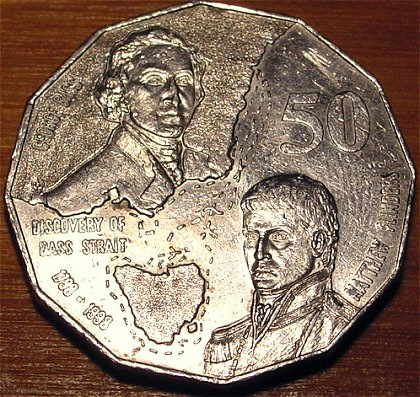 They are wondering whether they should maintain a safe distance, or seek shelter amongst the unknown dangers of the land. “The mountains… the most stupendous works of Nature I ever beheld… are the most dismal and barren. The eye ranges over these peaks with astonishment and horror.”

Wisely, they chart what they see and round South West Cape with a rising gale at their backs. Even today, with satellite navigation and satellite-phones, with vessels of the strongest materials, and rescue helicopters that can find stricken vessels in hours; this part of the world is still very much respected. It is still wilderness. There are no roads within hundreds of kilometres; it is a sanctuary for Earth’s other creatures. 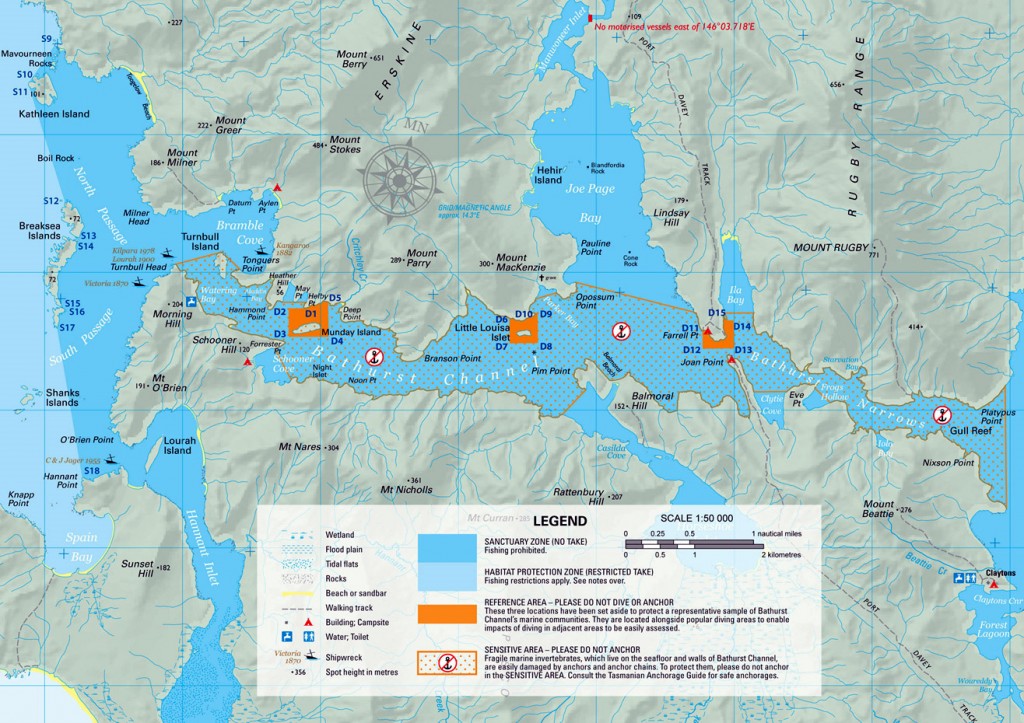 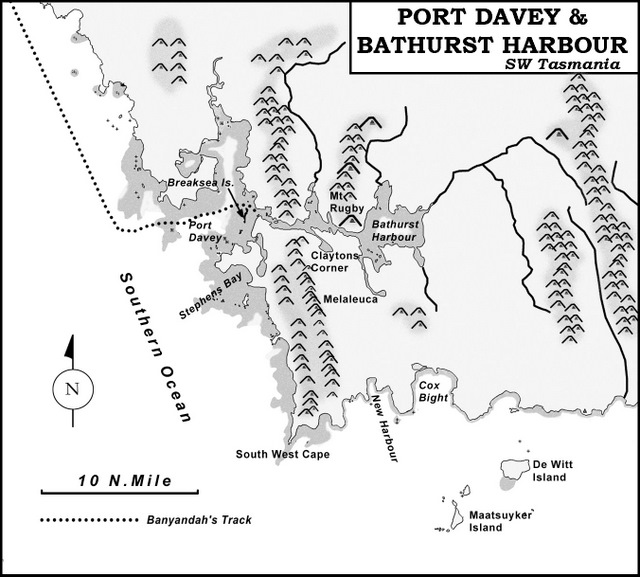 Little was known of the Port Davey/Bathurst Harbour Estuary until the Hydrological and Ecological Survey of 1988 – 1989. However, even if nothing had been known, this area would have been described as unique, because it is the only large estuary in southern Australia without road access or significant human impact. Apart from two small tin leases near Melaleuca Inlet, no development had occurred. At the time of the survey, the area’s permanent population consisted of three tin miners, and during summer months, a daily transient population of about one hundred fishermen, bushwalkers, sailors, and airborne tourists. A very unusual marine environment has been created by a deep layer of dark red-brown, tannin-rich freshwater, which overlies tidal saltwater.


Port Davey is open to Antarctica, only the narrow Bathurst Channel leads to safety, and it is hidden until nearly abreast Breaksea Island. By which time rock cliffs surround. There has been no escape for some.

Best advice: Plan your voyage to arrive in daylight. Do not attempt entry in strong W or SW winds. Get a long-range forecast. 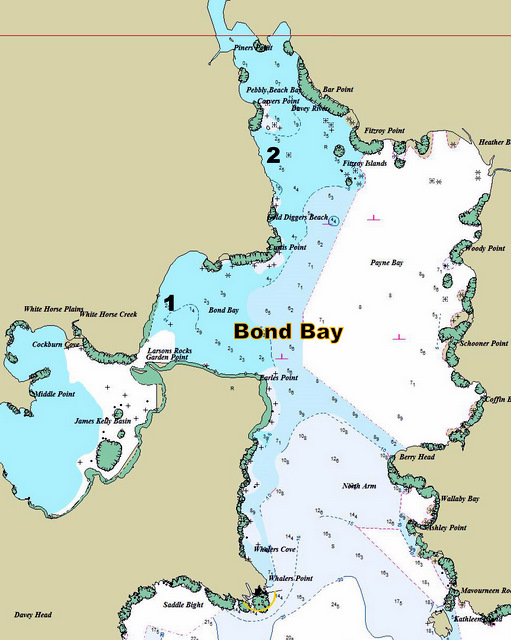 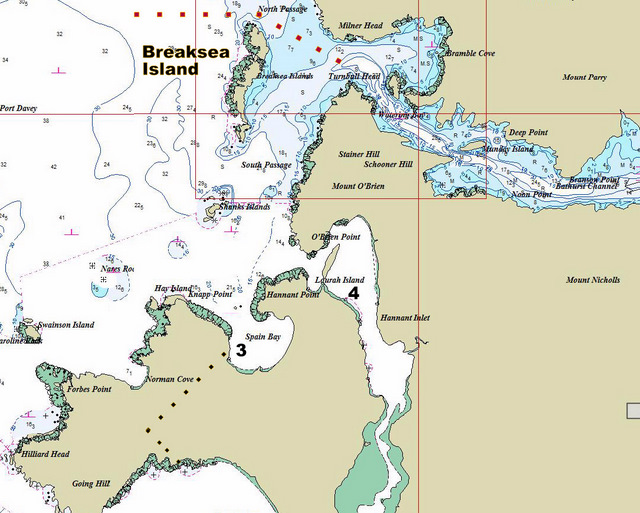 Entering Bathurst Channel,
In deep water, pass as close as safe to Breaksea Island, watch for Boil Rock (1/3 mile NNE)
Head about 120° T for mid channel. Then either branch east into Bramble Cove, or follow SE into Bathurst Channel. All deep water with no obstructions.

There are numerous anchorages within Bathurst Harbour, which is over 10 miles long. Some are no more than quiet out of the way spots; others offer outings and historical remnants. This is not a complete list. 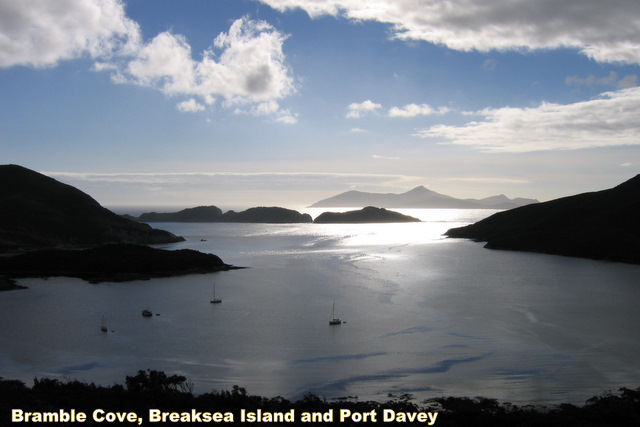 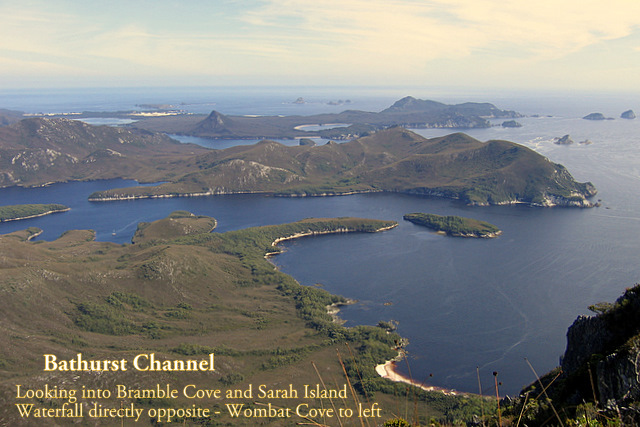 7/ Wombat Cove,
43°19.99’S ~ 146°00.46’E,
Shelter from all winds in 5 – 6 m sand/mud, in tight bay.
Some use lines to shore.
Impressive view of Mt Misery. Climb starts from NE corner of cove, leave dinghy on shelf tied to tree. Also fabulous walk to overlook Bramble Cove, spectacular when sun is low in west. 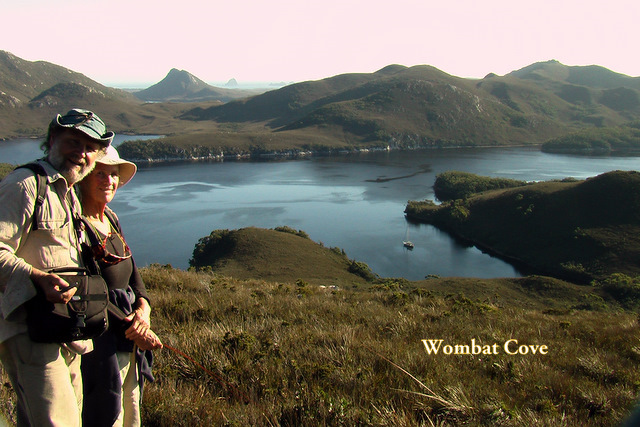 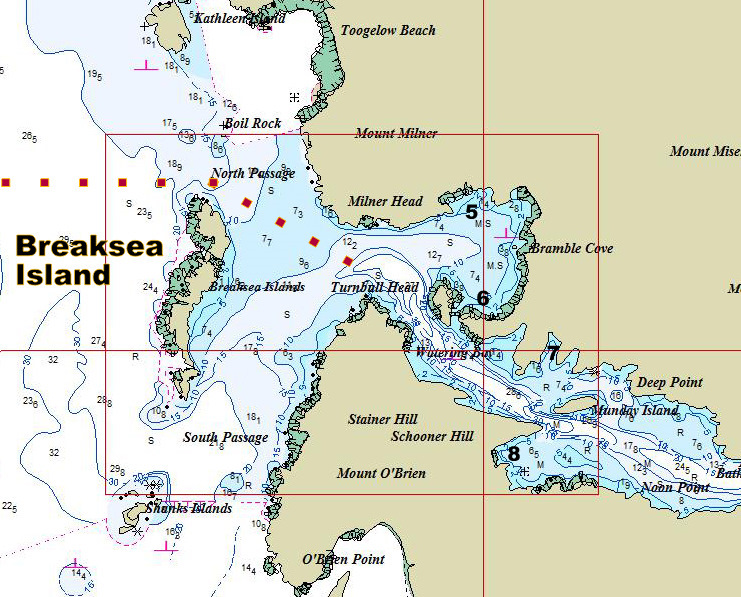 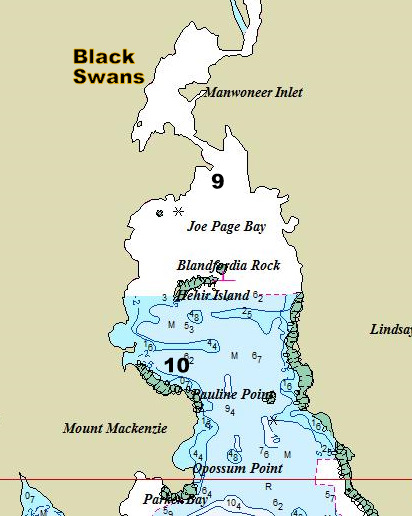 9/ Joe Page Bay,
43°18.59’S ~ 146°03.66’E,
Shelter from W through N to E in 3 -5 m soft mud, fair weather.
Best to skirt around Hehir Island to east, there is a shallow bar before, but seen on chart. Ease towards anchorage, it is a little shallow for keel boats, but closest to Spring River. Can take motorized dinghy in as far as Manwoneer Inlet, approach quietly is best, upwards of a thousand Black Swans feed there. 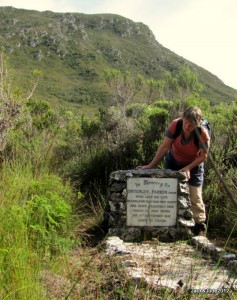 11/ Horseshoe Inlet, Casilda Cove,
43°21.24’S ~ 146°04.08’E,
Good in all winds, storm anchorage, mud in west corner, rock towards east point.
Tricky entrance, shallow with u/w rock. Pass close to point, turn west directly after. Do not proceed more than one cable into Horseshoe Inlet, rocks.
In storm conditions, bow anchor then two lines ashore to trees and pull in close under cliff for excellent protection. Do not anchor near corner, rock bottom. 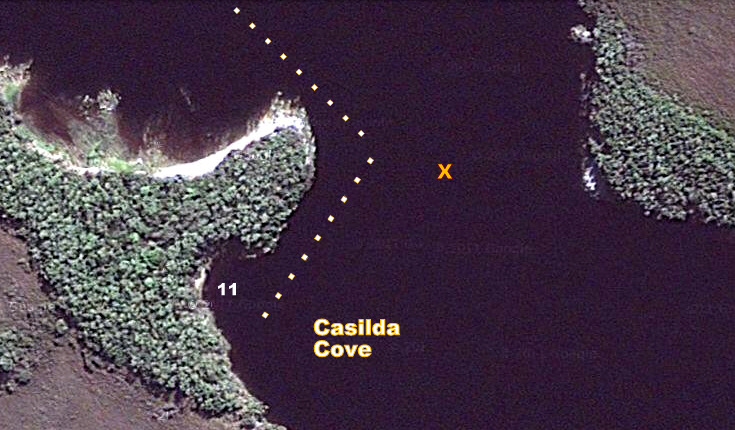 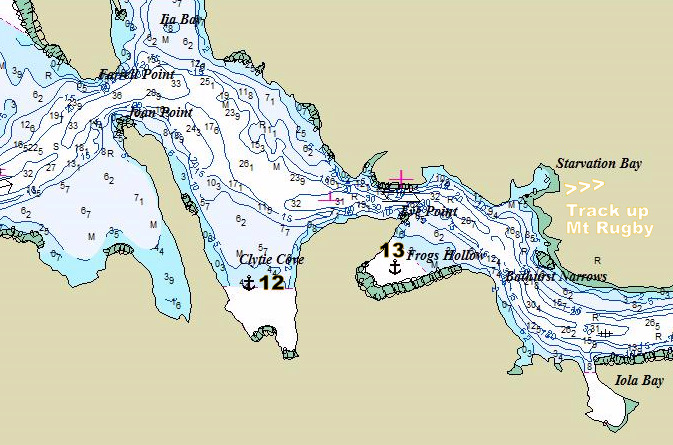 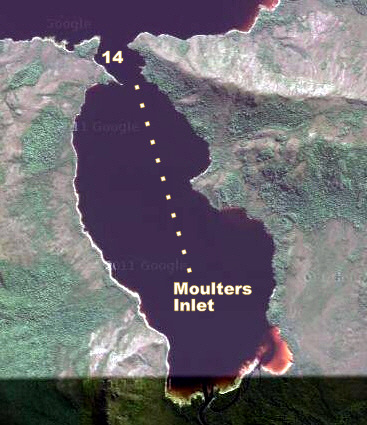 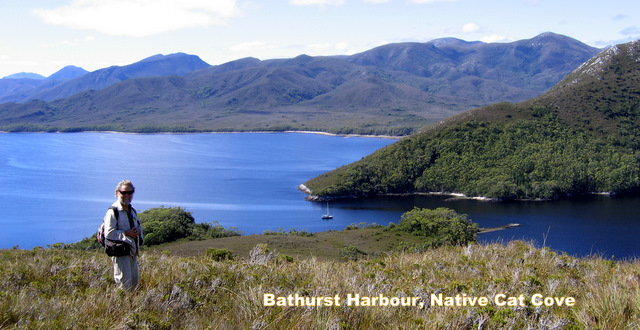 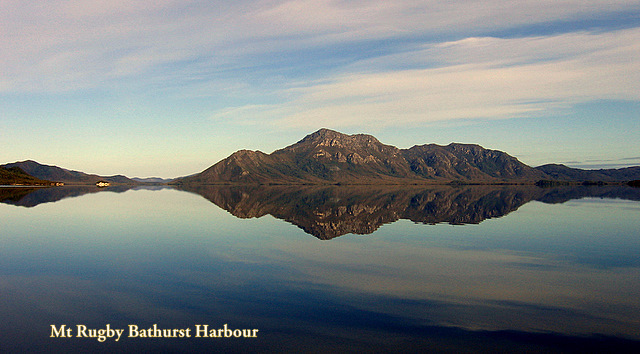 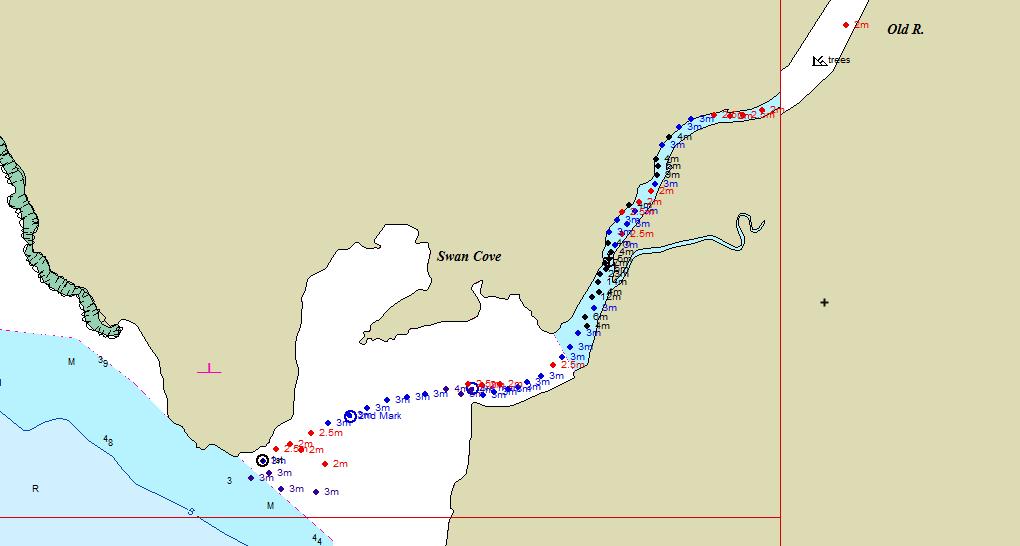 Shallow river bar near Swan Point with 2m at LWS. Anchorage inside river is difficult with a scoured rock bottom. We anchored in the narrowest part, in a deep hole next to the east bank, using ropes ashore to maintain position.

Soundings of River Bar available thanks to Andrew from Reflections out of Hobart
We have created a map for entering the Old River in SW Tasmania.
USE WITH EXTREME CAUTION
Soundings were taken from a dinghy by Andrew using a sounder directly coupled to a GPS.
Our yacht Banyandah entered the river early morn, rising tide, dead calm conditions, min depth 2.1 m close to the entry. We got as far as the anchor shown on map, rock bottom, tied to shore. Explored river many kilometres upstream by kayak. Quite beautiful. Deny King burial site on the mountainside.

15/ Clayton’s Corner,
43°22.48’S ~ 146°07.84’E,
Shelter from all winds in 2 – 4 m soft mud, a small area can become crowded.
Check depth alongside Clayton’s jetty, a trawler had flushed it deeper,
otherwise too shallow for keelboat – too narrow for a multihull.
A must visit to witness Clayton’s house married to Deny King’s sister. 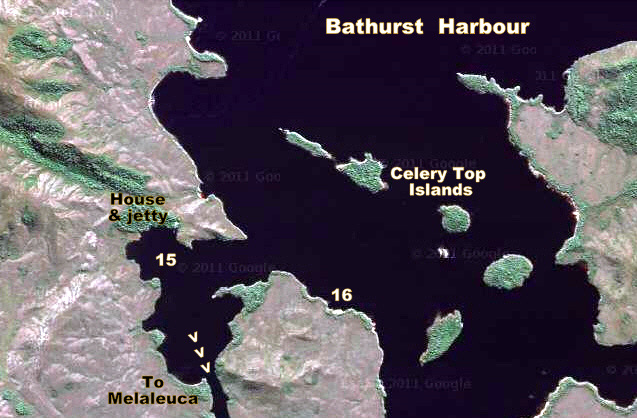 Melaleuca Inlet,
Park’s Headquarters, Deny King’s house, Airfield.
5 km dinghy ride following stakes, all kept on the left going south. May be possible to take keelboat up on the rising tide, but quite possibly no place to park after arrival.
Huge signage directs dinghies to new pontoon and walkway to the airfield.
After airfield, track off west to old tin mines.
Track east to bird watching hide and feeding station.
Read Deny King’s story for full impact. Very well written by Christobel Mattingley. 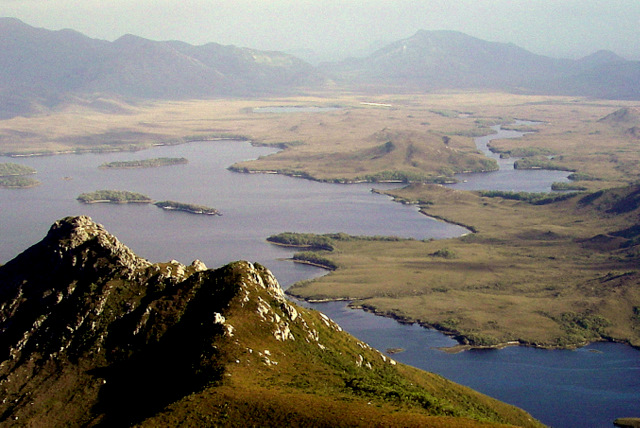 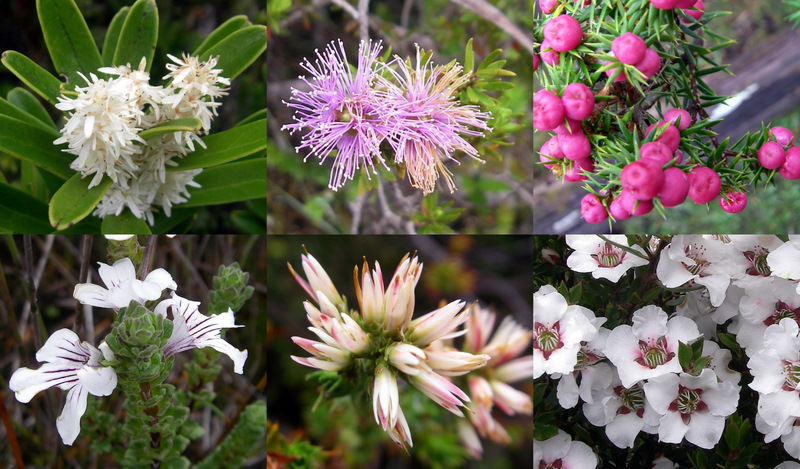