Sailing Icon from distant past 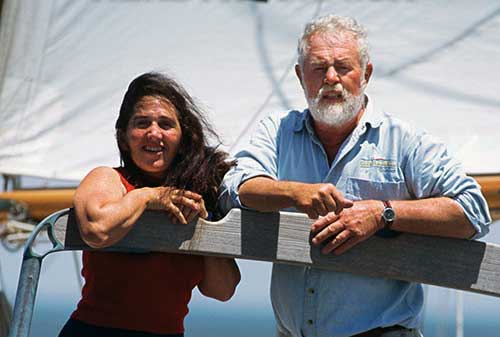 We’ve all heard of the sailing icons Lin and Larry Pardey. Well, Lin was a guest speaker at this year’s wooden boat festival, and came in contact with us when she wanted our Tasmanian Cruising Guide which she’d heard was the best. Of the many things we wanted to do at the festival, meeting Lin seemed a good idea, so we tracked her down at a guest speaker’s get-together late Saturday arvo. Geez, these media functions are so crowded, especially when free beer and drinks are on offer, and here I should say, my hearing is not so good in noisy crowded rooms. I’m guessing, too much industrial noise and deep diving when a youngster has sort of made me profoundly deaf in the high range. Anyways, we track this mighty midget down amongst the shoulder-to-shoulder beer-swilling crowd, and of course she was mobbed, so we hung back for our moment to greet her. As she started to walk away, I tapped her shoulder and mentioned who we were and that she was using our guide. Somehow, in our first few words, America came up, maybe because I was born there, and so had she, and that both of us had relocated to finer places. Frankly, neither Jude nor I have read her books or seen any of their films. Maybe if we had, we’d have been more informed, but out of curiosity I asked where she’d grown up and was surprised to hear her mention Malibu Beach thinking that wasn’t all that far from where I grew up. In mentioning that, she said that her teenage years had actually been spent in the valley, the San Fernando Valley.

Have you ever had one of those moments that cause the short hairs at the base of the head to stiffen and rise up. That’s what happened when I asked her where in the valley? Amongst all the noise, I heard a word I’ll never-ever forget because it’s a word my teacher’s had pounded into our dull pupils’ heads. The name I heard is a small town near Tarzana called Pacoima, a place named by the Tataviam Indians more than 1500 years ago. I remember it because my teachers had us recite, “People Always Carry Old Inky Meat Around,” over and over in ridiculous singsong lyrics to teach us how to spell our school’s name. Pacoima. 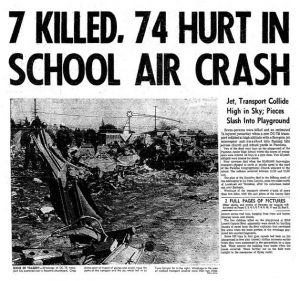 Now, Pacoima is just not an ordinary school. It’s famous because of a rather tragic event, an event that happened in 1957 when I was just entering puberty at 13 years old. At that impressionable age, a four engine aircraft crashed into our school killing not only all the crew but also a few of the students, and I was there. So, with a rising flush I asked, “Do you know of the plane crash?” And she replied so quietly in the chaotic noise that I had to lean close to hear her say, “I was there.”

With an incredulous look of disbelief, I announced, “So was I! On the playing field when the plane crashed. I lost my best friend that day.”

It beggars belief; two people sharing such a tragic event as youngsters, going on to become world sailors logging collectively several hundred thousand miles under sail. As startling, in the next moment, I learnt that Lin Pardey, nee Mary Lin Zatkin, had not only attended my Junior High school, we graduated in the same year!

Those with hearing problems will know the difficulty of conversing in a room crowded shoulder to shoulder, with small groups emphatically making points and telling stories, so, when I found myself uncomfortably close in order to hear Lin’s reply, with a shake of my head I said, “Let’s save this conversation for a quiet anchorage. After we get off the slip next week, I’ll send an email.”