When Hobart Town was founded in 1804, convict labour was used to construct roads and buildings. To discourage escape, shipbuilding was forbidden in the new settlement. However, some years later when the settlement badly needed ships, the government rescinded that restriction. And this prompted James Kelly, a young lad from Sydney who first went to sea as a cabin boy, to convince local merchant Thomas Birch into financing a circumnavigation of the island to locate shipbuilding resources. In particular, they wanted to find the source of huge logs sometimes found floating along the shores that were light, strong, and seemingly indestructible. He must have inherited a bit of the blarney from his Irish parents because Kelly also convinced another man into lending him an 18′ open whaleboat. And late in 1815, he set off. 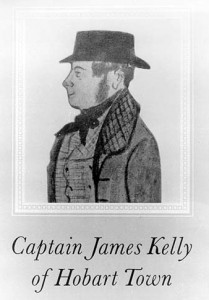 Nine days after leaving Hobart, 24-year-old Kelly discovered the entrance to Macquarie Harbour, miraculously finding it hidden behind thick smoke from Aboriginal fires. Portentous he later told everyone, because had the air been clear, the Aborigines were close enough to have speared him.

Upon the shores of Macquarie Harbour, he found growing an abundance of good shipbuilding timbers: Huon, Celery Top and King Billy pine, as well as Blue Gum for construction, and Myrtle and Sassafras for furniture. On the 29th of December, he landed on a small island within the harbour and named it Sarah after Birch’s wife. He then explored “a grand river,” naming it Gordon after the whaleboat’s owner.

Resources:
1/ Charts of Macquarie Harbour and Gordon River by Trevor Norton – filled with many details, soundings, tracks, and far more information than is available here.
Purchase from: The Crays, The Esplanade, Strahan.
2/ Two’s a Crew – chapters 29 through 33. History, walks, Sarah Island, Birches Inlet explored, journey up Gordon River as far as a yacht can go, dinghy to Franklin.
3/ The Tasmanian Anchorage Guide (TAG for short) published by the Royal Yacht Club of Tasmania. 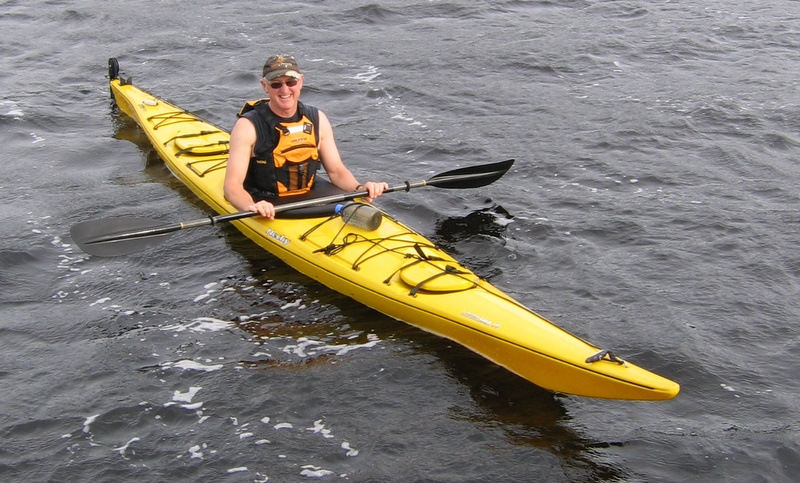 Pieman River, NW Coast – Do not attempt – dangerous even in calm conditions.

Macquarie Harbour, is the second-largest natural harbour in Australia after Port Phillip Bay. It is six times the size of Sydney Harbour. However, its real glory is not its size, but its setting. The surrounding wilderness and the Gordon River that flows through it are otherworldly. Macquarie Harbour is a superb cruising area offering numerous isolated anchorages. 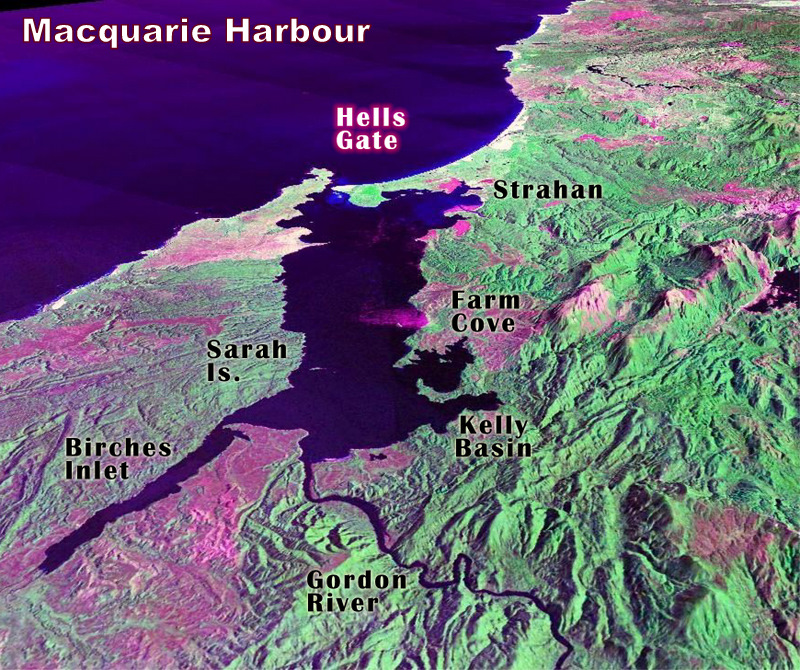 Hells Gate, was given that name by convicts being interned on Sarah Island. The name has stuck because Hells Gate lies directly exposed to Southern Ocean swell and the Roaring Forties. It can have extraordinary outpourings of water, which are not based solely on tide, but a combination of wind, atmospheric pressure, and how much water is being released by the Gordon River Power Station.
Best advice: South winds increase flow – North winds lessen it – Heavy rains increase flow. Do not attempt after dark.

Hells Gate on a nice day

Pilot Bay, Alternate anchorage while waiting.
42°12.26’S ~ 145°12.18’E
Shelter from NE through S to W in 3 – 6 m of sand. Some swell possibly.
From up the mast one can observe Hells Gate to check for whirlpools/current before entering. Good flathead fishing. 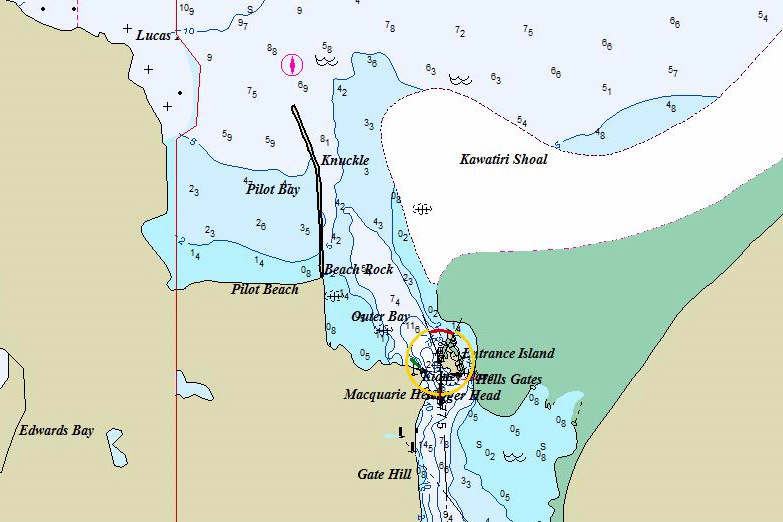 Entrance to Macquarie Harbour,
Minimum depth about 4 m towards end of rock wall, then very deep through The Gate. Initial track of 157° T with Bonnet Island just open from Macquarie Head until close abeam knuckle of rock wall. Pass midway between Entrance Island and Macquarie Heads. Better to favour rock wall than end up on abrupt Kawatiri Shoals on east side. Once inside follow leads. Be aware of currents setting across the channel.
Important: Study chart beforehand. Know where to look because it can all happen rather quickly. Some leads are hard to pick out.

There are numerous anchorages within this landlocked body of water, which is nearly 20 miles long. Some are no more than quiet out of the way spots; others offer outings and historical remnants. This is not a complete list.

Strahan, Risby Cove,
42°12.26’S ~ 145°12.18’E
Shelter from all winds in 10 – 12 m mud. Good holding.
When entering Strahan: Locate No.12 RED MARKER on submerged reef off Town Point, unless you want to lose your rudder or look a fool.
Strahan is a small, picturesque frontier-style town with an abundance of character and a variety of stories to tell of the West Coast’s pioneering days. 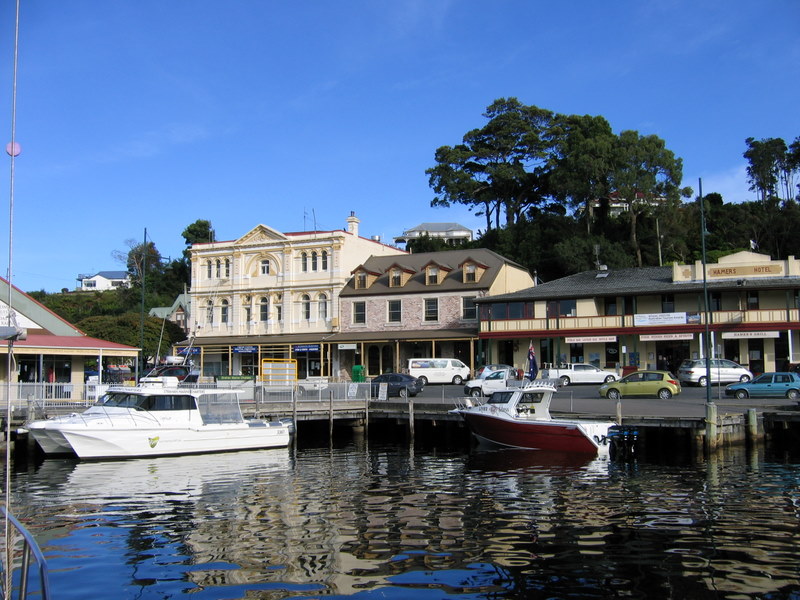 Anchor anywhere off the town, leave access for tourist Big Cats. Good holding mud.
Banyandah has anchored across from town, quieter, 42°09.32’S ~ 145°19.93’E
She has also parked just outside the cats track within easy row of facilities. 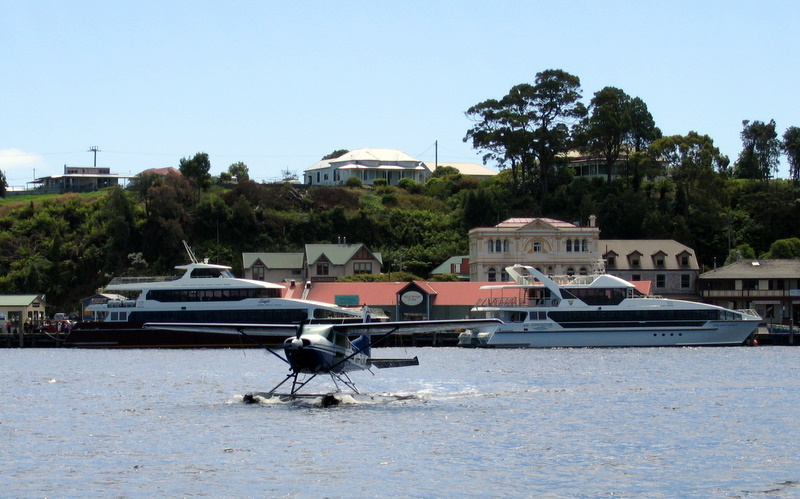 Facilities: Fuel on main jetty next to Stormbreaker – kiosk pay station accepts credit with pin and debit cards. Supermarket up the hill next to fuel station. Bakery on foreshore next to pub. Another pub at Regatta Point, both serve meals. Restaurants for all budgets. Car rental, Laundromat, Timber mill. Lookout is up Esk Road. Wilderness Railroad trips to Queenstown. 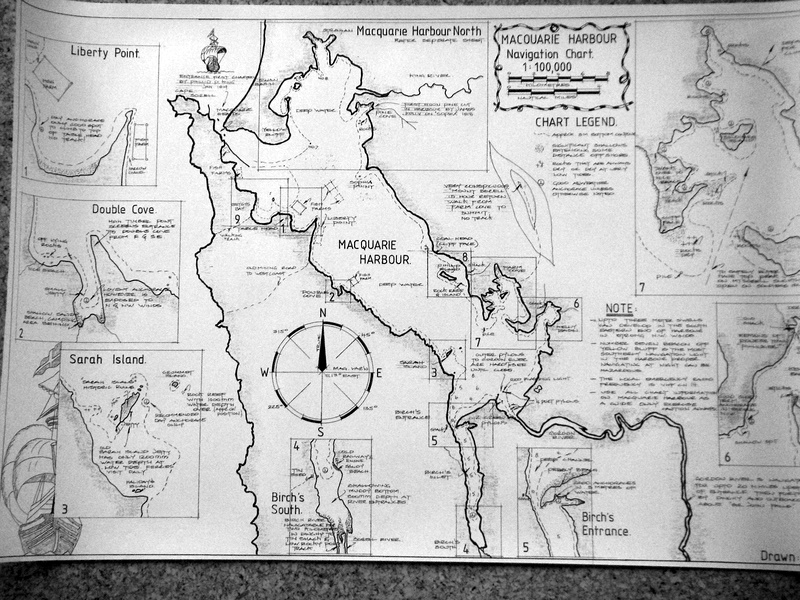 Do yourself a favour, pop into The Crays on the Esplanade, and purchase Trevor Norton’s Macquarie Harbour and Gordon River charts. Filled with details and good advice.

Swan Bay,
42°12.18’S ~ 145°16.89’E
Shelter from all winds in 4 m mud. Good holding.
Tricky entry via gutter behind Neck Island. Take it slowly as shallows suddenly. Big hole once inside with views to Mount Sorrel and a pleasant walk to Ocean Beach via 4WD track just before picnic tables. 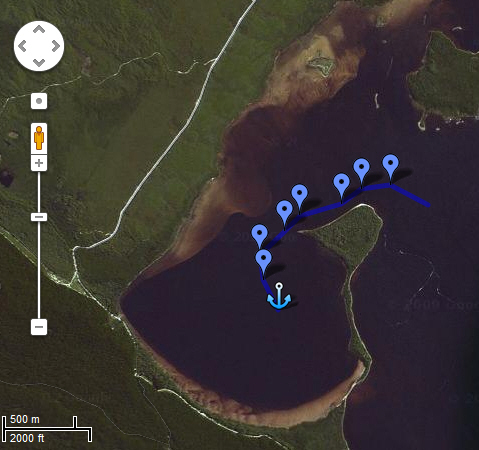 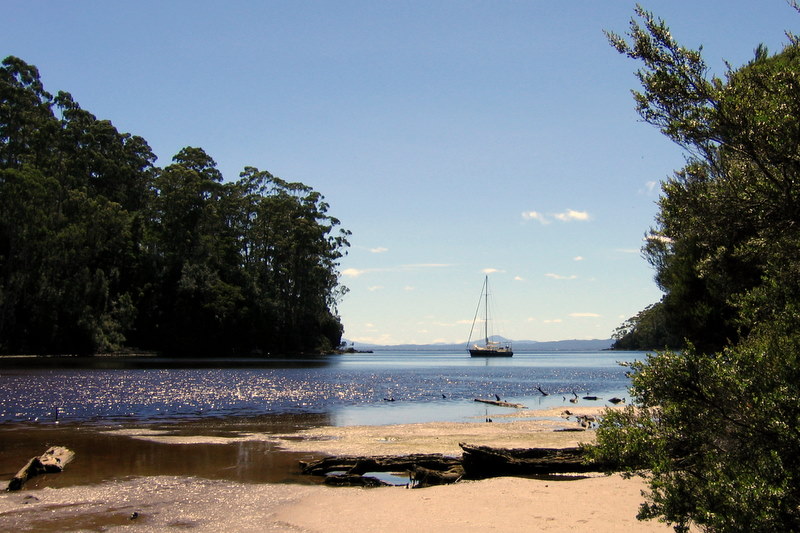 Farm Cove, access to Mount Sorell
Entry: Give RED beacon off Gould Point a wide berth to south before entering bay with East tip of Soldiers Island in line with Sorell’s tallest Peak. There is a white buoy marking south extreme of shoal.  Give Soldiers Island wide berth to south after passing Pine Point then proceed until abeam anchorage 1 entering midway between points. 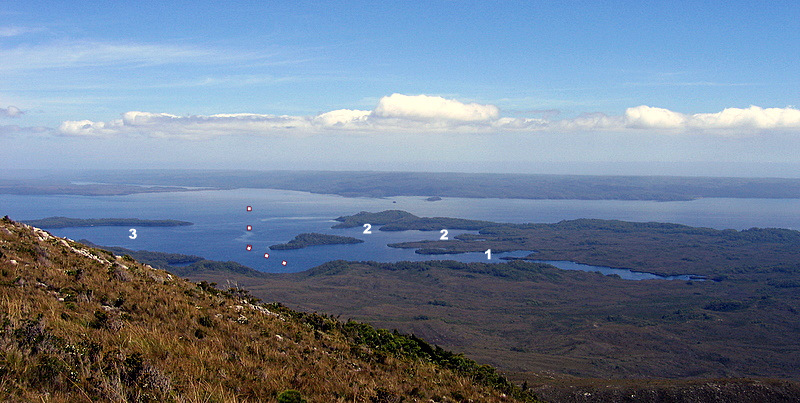 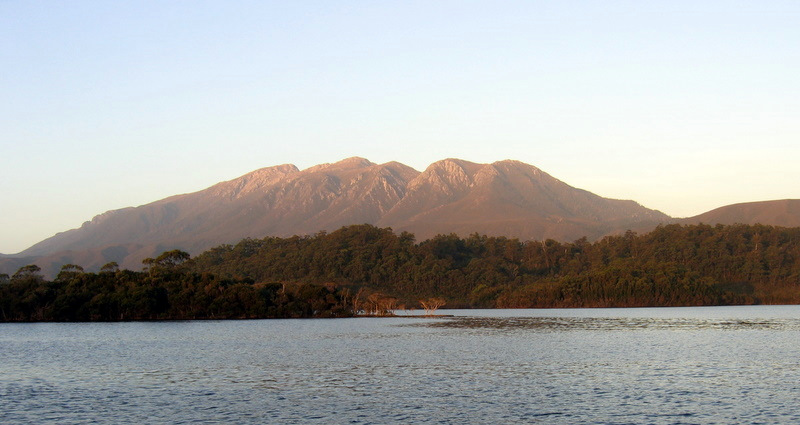 Kelly Basin, West Pillinger,
42°21.30’S ~ 145°32.70’E
Shelter from all winds but strong SSE in 4 -6 m mud.Entry is direct except for a few rocks off Picnic Point then watch for stakes off Leger Point marking old jetty posts.
Kelly Basin was developed as a port during 1898, but abandoned in 1903 following a merger. Remains of wharf and railway facilities are fascinating. Search rainforest near old jetty piles for carriage remains, somewhere near 42°21.33’S ~ 145°32.55’E 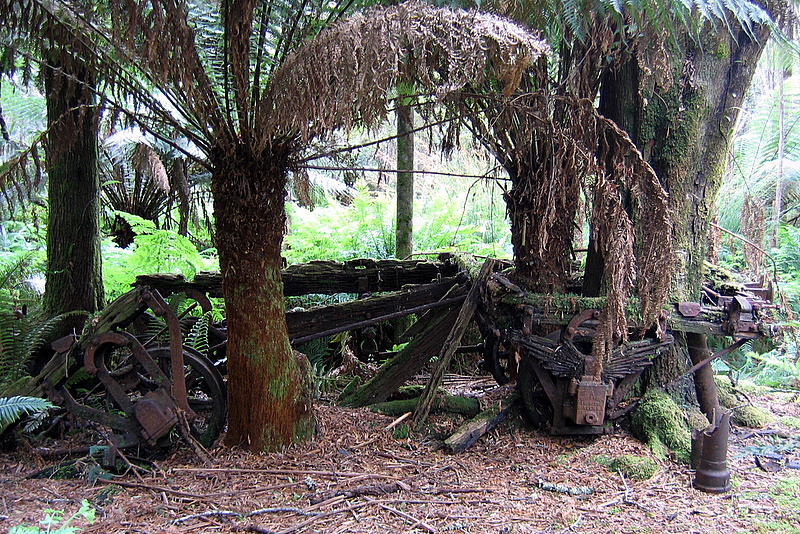 Bogies of carriage circa 1900 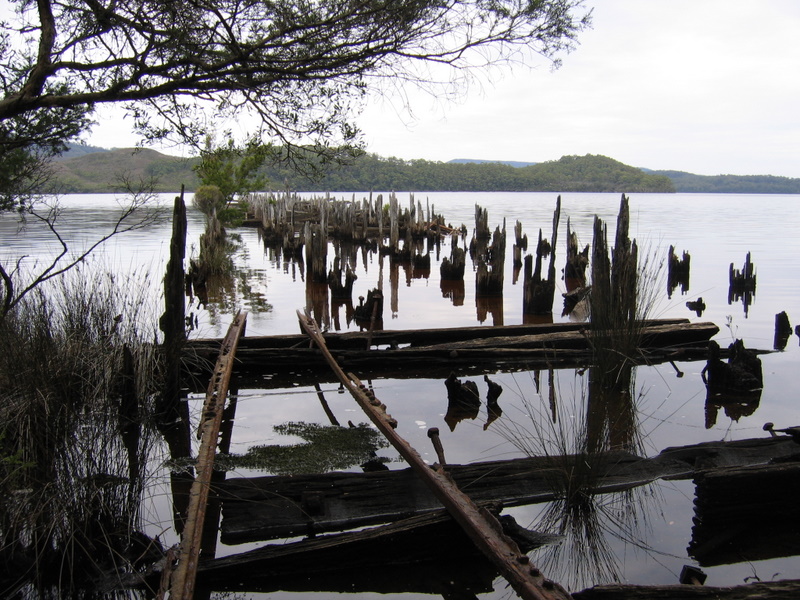 Birches Inlet, East Arm,
42°26.42’S ~ 145°27.91’E
Shelter from all winds in 4 -5 m mud.
Approach from direction of Sarah Island as a shoal extends nearly a mile out from shore between Gordon River and Birches Inlet. Favour west shore. Once in, extensive area with few obstacles. Abandoned timber mill on east shore best found from Trevor’s chart. We get mobile phone connection on harbour side of entry.
Furthest in for Banyandah (1.8 m draught) 42°30.41’S ~ 145°28.11’E
Birch River accessible by dinghy for 2 km to Orange Bellied Parrot observation site.

Sarah Island,
42°23.37’S ~ 145°27.13’E
Day anchorage or calm weather
Black mooring buoy is Stormbreaker’s. Anchor nearby. Row to old island jetty to visit Sarah Island ruins. Penal institution from 1822 to 1833, “place of banishment for the worst description of convicts.” However, shipbuilding was among the trades carried out by the convicts. In its day, Sarah Island was the largest shipbuilding yard in Australia. Early morn offers best effect. Take gold coin to buy a pamphlet from the box. 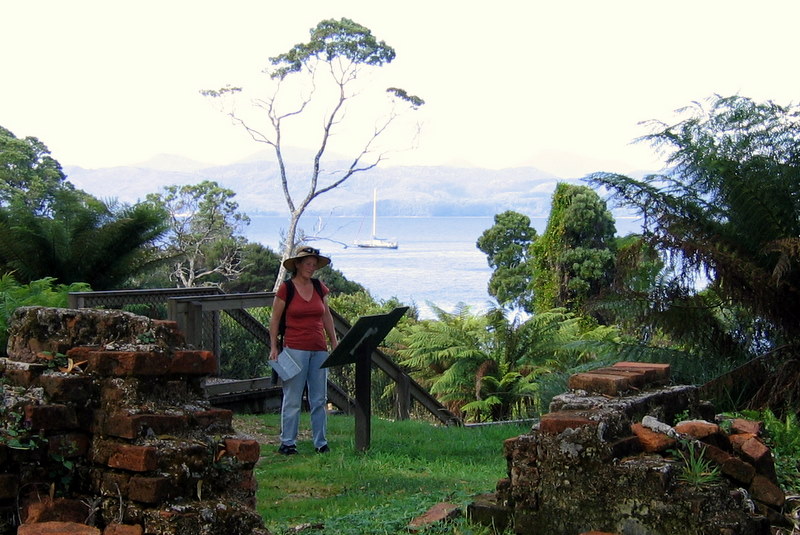 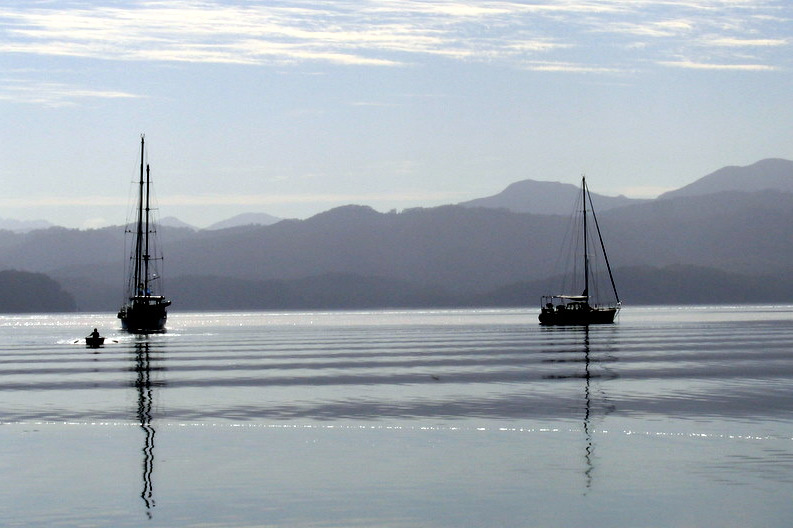 Gordon River
Entry is marked by RED and GREEN pile markers; least depth about 4 m. River is navigable for at least 15 miles by yachts through forested mountains. Many attractions. Tourist FastCats enter at high speed then slow to 5 kts. Must be alert for floatplanes landing on river. Can be misty if foul weather. Fresh water, quite cold. Picturesque Sir John Falls popular stop for floatplane. Possible dinghy trip beyond Big Eddy to junction with Franklin River.
Definitely worth at least a week. Trevor’s chart shows all attractions and best anchoring spots.

Misty morn on the Gordon 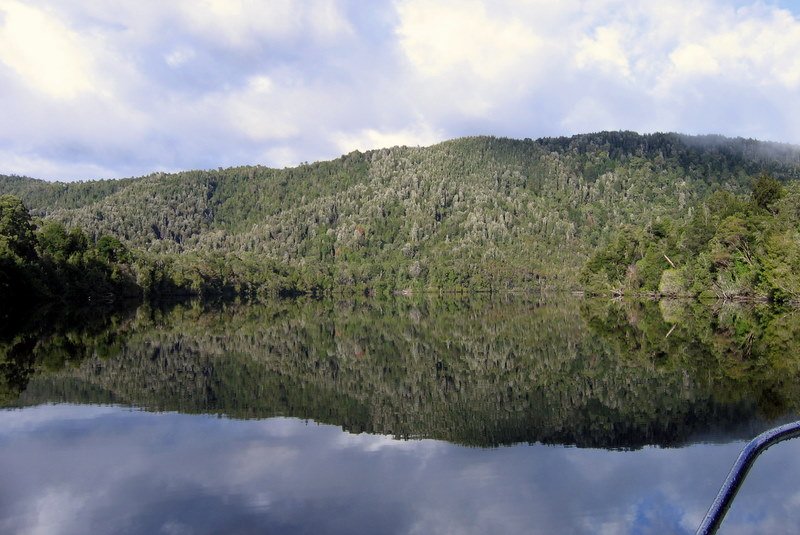 Mirror reflections most days on the Gordon