In 1798, when Bass and Flinders discovered Tasmania is an island instead of what was thought to be the most southern tip of Terra Australis, their discovery prompted many captains to risk those dangerous straits in order to shorten the time to the new colony at Sydney Cove. But what Bass and Flinders hadn’t seen is that the western entrance to Bass Strait is blocked by a very large obstruction. 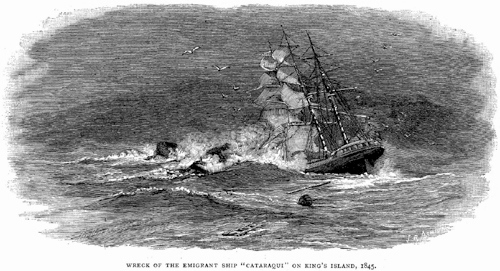 Situated halfway between the mainland and Tasmania’s north coast is an island 64 km long by 24 km wide with gently rolling hills rising to 213 metres at Mount Stanley. It was sighted a few years after Bass and Flinders explorations by Captain John Black, a privateer aboard the Harbinger, who was taking a more southern route than the brig Lady Nelson, the first ship through the Strait. It was then claimed for Great Britain in 1802 to prevent the French taking possession, and named to honour Philip Gidley King, the third governor of New South Wales.
Lying directly in the path of the Roaring Forties, the tourist pamphlets claim King Island is a land of long, empty beaches and clean, fresh air, offshore reefs, rocky coasts, dairy farms, lighthouses and shipwrecks. Its treacherous currents may have claimed hundreds of ships and far more than a thousand lives, but today it’s more renowned for award-winning creamy cheeses, succulent beef, and the freshest seafood. 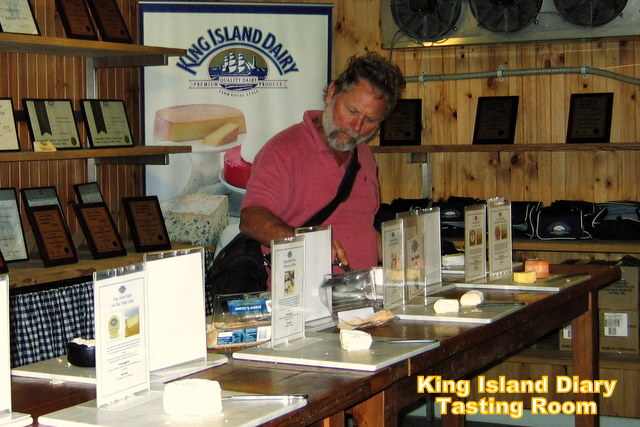 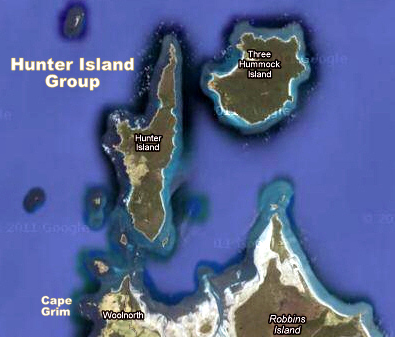 Hunter Island Group:
We begin our exploration of this part Tasmania’s northwest by first looking at the Hunter Island group just north of Cape Grim, where the cleanest air in the world has been recorded.

Hunter Island,
The largest island in the Hunter Group, six kilometres off the north-west tip of Tasmania. The island is 7330 ha in size, approximately 25 km long and 6.5 km wide at its widest point. Hunter Island shows evidence of 23,000 years of continuous occupation by Aboriginal people and has been inhabited by non-Aboriginal people for approximately 170 years. Many different owners have grazed cattle on the island lease since 1853. 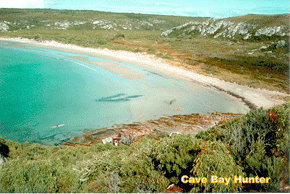 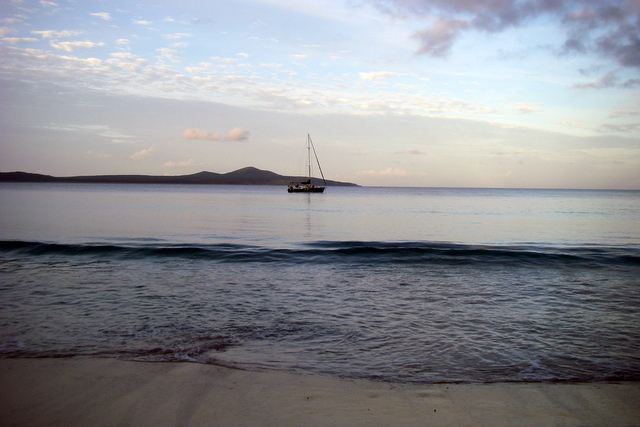 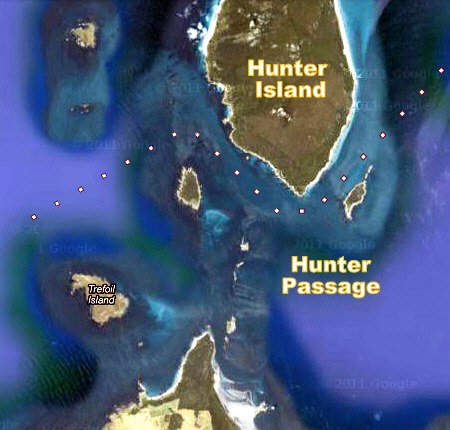 Basic route to follow: Inside Stack Island then close to S. tip of Hunter, transit towards Steep Island until clear of Bird Island, then WSW into deeper water.
Expect overfalls. Watch for Nares Rocks north of track.

Three Hummocks Island,
Nature Reserve except for the area around the homestead. Numerous day-use and overnight anchorages with stunning scenery around this island. 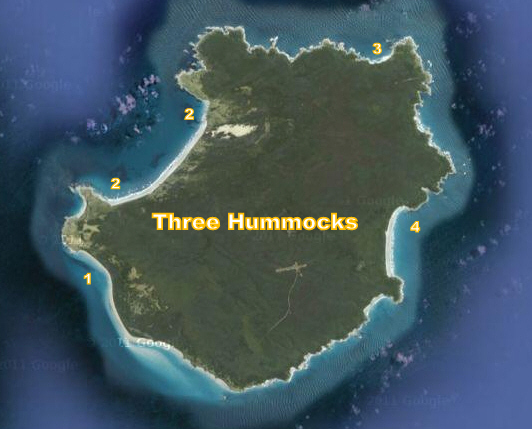 1/ Chimney Corner
40°27.02’S ~ 144°50.61’E
Shelter from NNE through N to ESE in 3 – 4 m of sand.
Wonderful stopover at historical homestead, dilapidated jetty, tracks leading inland.
Please make your presence known to the caretakers before wandering around. 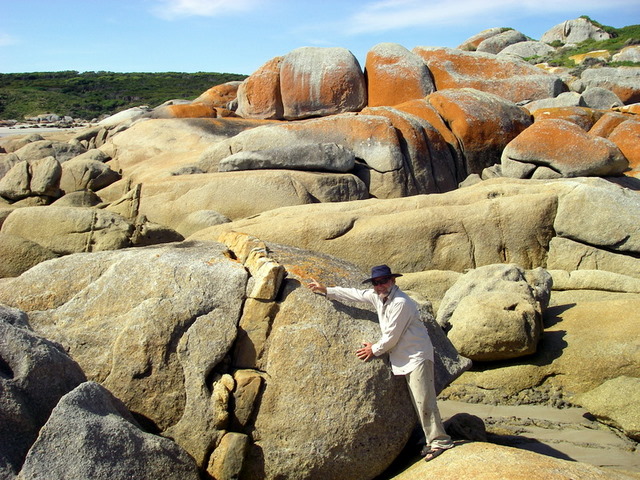 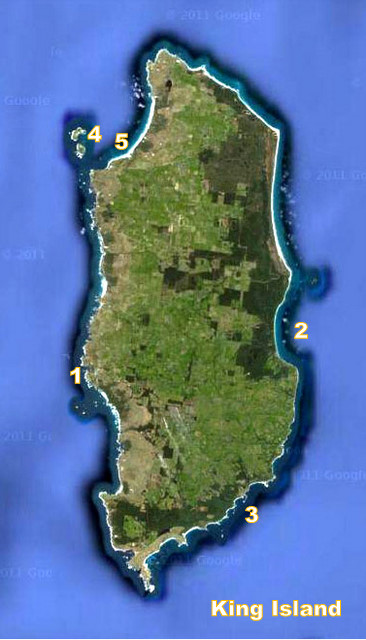 King Island,
Australia’s seventh largest island, King Island is best known for its superb dairy produce, seafood and its beef being among the best in the world. The pace of life is far slower than just about anywhere else in Australia and the locals – there are only around 2,000 of them – boast that the only traffic delays they encounter are wallabies, turkeys, possums and pheasants, to name a few.

A word of warning: King Island’s changeable weather and treacherous currents have claimed hundreds of ships and far more than a thousand souls, play it safe and do not add your ship to this record. The wrecking of the Cataraqui in 1845 remains Australia’s worst maritime disaster. Four hundred emigrants drowned after their ship struck rocks just south of Currie.

1/ Currie Harbour, main town.Everything in Currie is scenically deposited on a bold rocky coast dotted with green forest that’s surrounded by lush pastureland. But its harbour, being on the winter weather coast, seems very exposed, being protected by a rocky reef. The hill above it is dominated by a white lattice light structure built fifty years after the island’s main lighthouse was established at Cape Wickham. 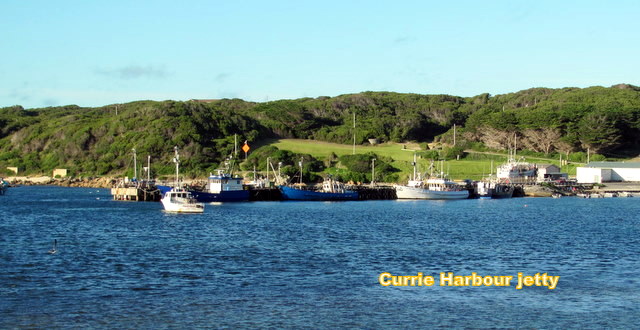 Approach on leads heading 106°T. Pass close to red buoy then turn onto 134°T for leads on end of wharf. Usable up to 3 m draught but careful of shoals either side of jetty. In heavy weather, harbour entrance may break right across. 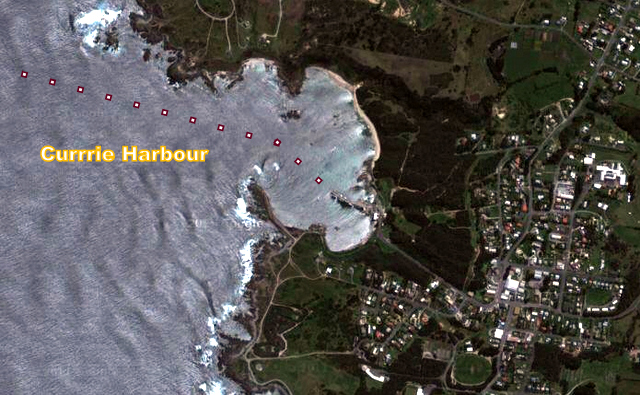 2/ Naracoopa, open roadstead
No facilities.
Shelter SSW to NW in 6 – 10 m sand with some weed, may be affected by swell.
Pretty spot for an overnight stay. 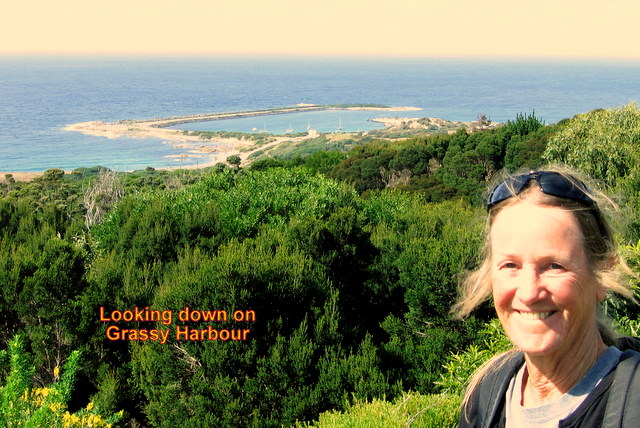 Approach either side of Omagh Reef (Oh my God) using appropriate set of leads. Then turn onto harbour leads 52°T to enter between breakwalls.

Grassy is a small harbour with permanent fishing boat moorings and a couple of others occupied by local yachts. A mooring can usually be found by contacting the Ports office on 03 64611155, they are located in a brick building at the Port. There are toilets and showers open to visitors at the right hand end of the boat club. If anchoring, about the only clear place is the turning circle of the supply ship, but don’t be there when it arrive. Boats should not be left unattended in this area. 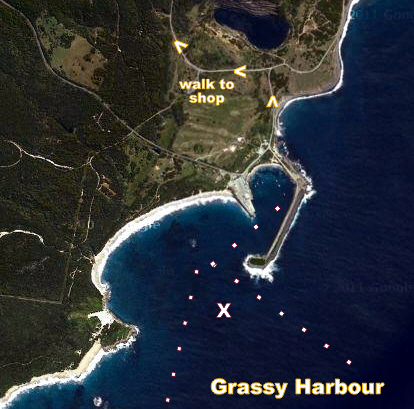 Important: At King Island, except for the KI Boat Club mooring, all vessels secure to mooring chain. Do not use mooring line to secure your vessel. Pass your line through a link and double back. 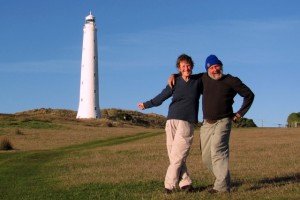 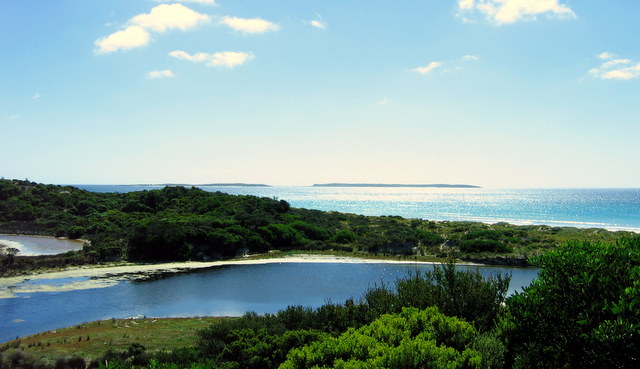