Our Worst Disaster Has Struck

Hello – We’ve been taken away from our sailing adventures by more water than we like. Floodwaters inundated our house in northern NSW and we had to return early to sort out the mess it left. Since returning, we’ve been amazingly busy cleaning and sorting before falling into bed each night.

On the up-slope now, it’s pleasing to report our situation is much improved. Although patches of mush still linger round the property, our castle is neat and tidy once again. And the house functions. Lights go on and off, water comes out of the taps, and there’s even hot water for a well-deserved shower at the end of our long days.

More on the flood HERE.
Here’s what we were doing before that unprecedented disaster struck: 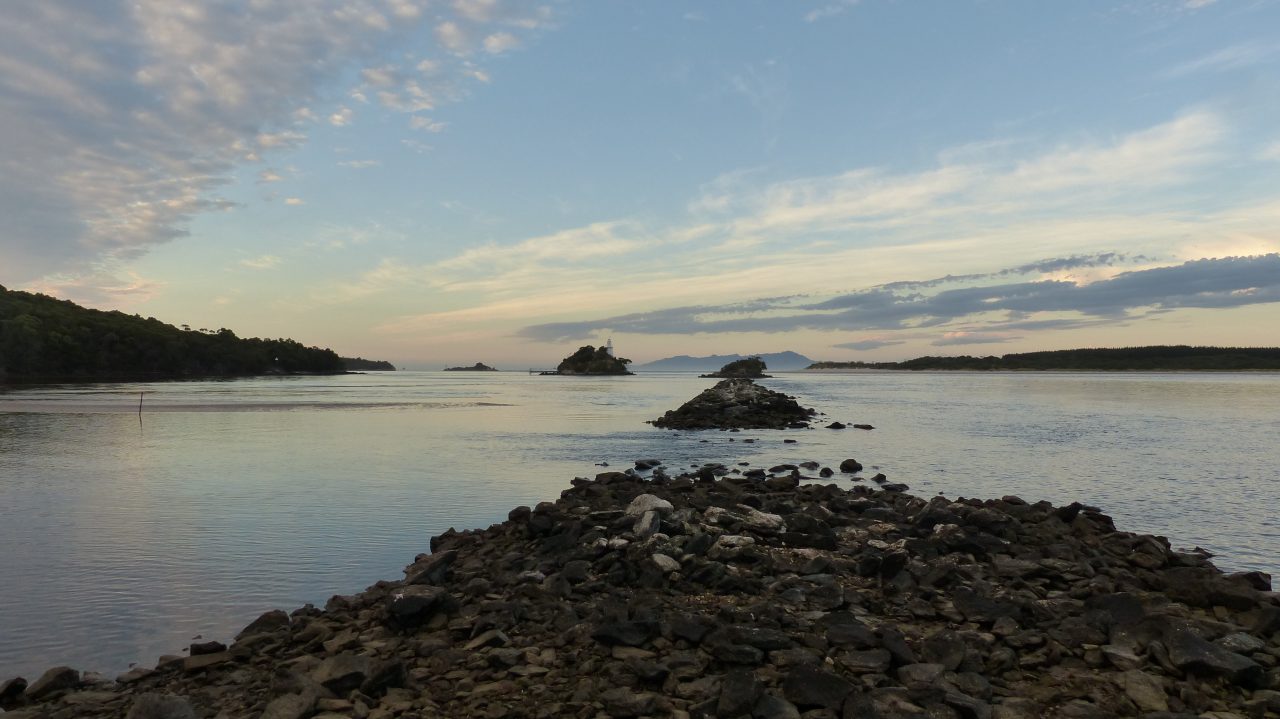 MACQUARIE HEADS – A place of beauty ~
Macquarie Heads is an isolated region of the wild west coast near the entrance to Macquarie Harbour that is easily reached via kayak or in a boat. Filled with exquisite wild creatures and wild scenery, it is a laid-back area perfect to absorb Nature’s wonders while pondering the meaning of life. There’s a spot to pitch a tent with a magnificent view towards Hells Gate, and other spots on lonely isolated beaches where the hunt for flotsam will occupy your time while you wait for a crayfish to enter your trap or a fish to take the bait. Be prepared to look after yourselves at this isolated location.

Pilot Bay, just outside Hells Gate, is a great place to anchor your vessel in most weather. Its sand bottom of 4 to 5 meters depth is not so good in northerly conditions, but it’s tranquil in south to east conditions and perfect even with SW winds and seas.

Pilot Bay is also the gateway to the wild west coast on walking trails to several isolated beaches, one of pebbles, another a crescent of fine white sand. Fishing, craying and beach walking are glorious. 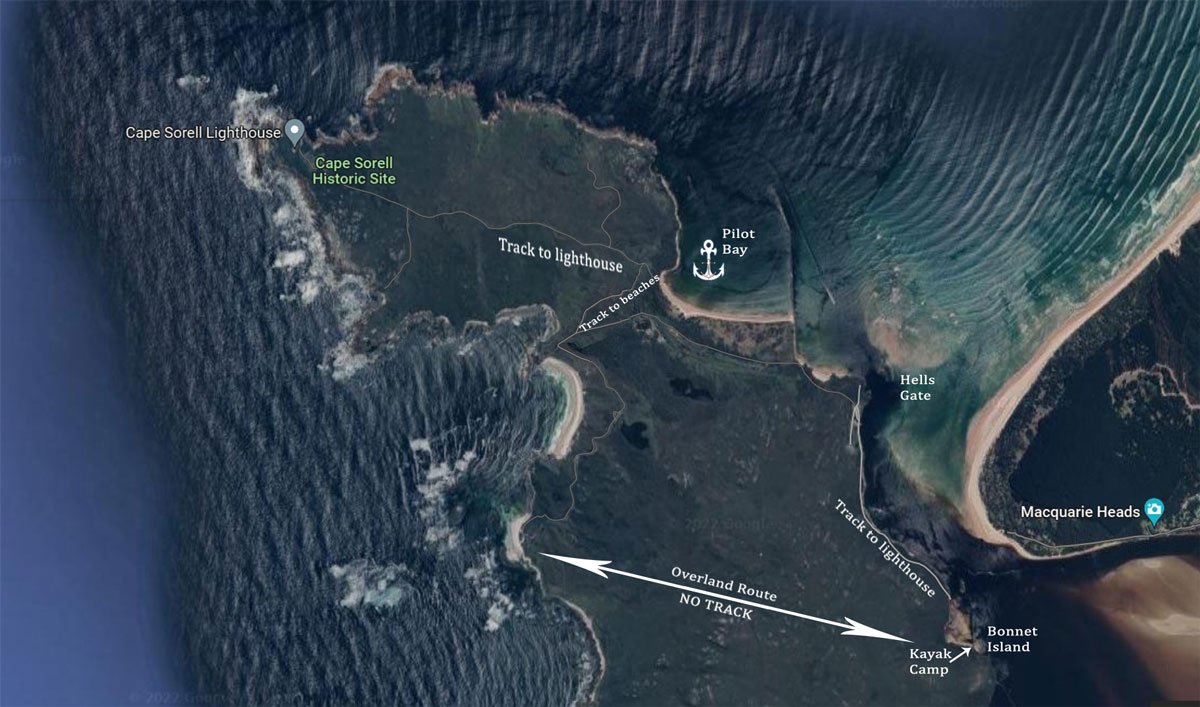 Cape Sorell Lighthouse ~
A fabulous day walk from Pilot Bay will get you to the Heritage listed lighthouse at the tip of Cape Sorell. Constructed and first lit in 1899, today the lighthouse is fully automated, using solar panels to provide power.

Pebbly and Tiddys Beaches ~
Another great treat is the walk to the wild beaches south of the lighthouse. These can be found by taking the track to the south just after leaving the sand beach at the far west corner of Pilot Bay.

Changing Anodes Underwater ~
Is not easy, although it can be done. But, rather impossible in the tannin stained dark waters of Macquarie Harbour with only millimetres of visibility. So we took our treasure outside the Gate to Pilot Bay, where ocean water provides better clarity. The only problem – when it comes to icy water, Jack’s a wuss. But the job had to be done. So the captain donned his wetsuit and took the plunge.

Changing the shaft anode went pretty easy in water so cold there was a thermocline distorting his vision and chilling his bones. But he got the shaft collar changed in twenty icy minutes. Then, after finding the teardrop anode holes weren’t quite spaced right, he surfaced shaking like a winter leaf in a snowstorm. Grrr.

Drilling them a tad bigger then gulping down a hot mug of soup while being rubbed down, he took three deep breaths before jumping in to complete the task. 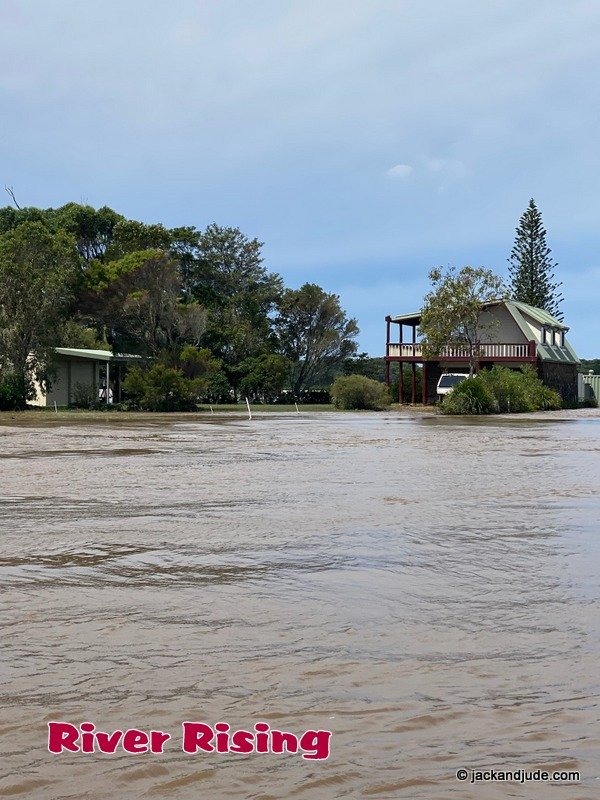 Flood waters entered our shack near Ballina in northern NSW while we were in Tasmania aboard Banyandah..

Followers of our blog will know the destruction this climate event brought to thousands of common folk and countless numbers of creatures. We returned to find our neighbours distraught and waiting for action. The widespread devastation hampered recovery. So many had lost appliances, machinery, household goods, the few shops that could open, sold out. And the flood blocked the new highway for many weeks.

February, the month of the first flood, saw 550 mm of rain fall in Ballina. The March storms dropped an additional 850 mm onto saturated ground. In one night, rain fell so fast, flash flooding put downtown Lismore under again, creating more anguish and heartache. To this day, the Lismore Shopping Centre is still abandoned. And Woodburn, the small riverside town just upstream from us, is destroyed. So too, Broadwater, Coraki and several other villages. 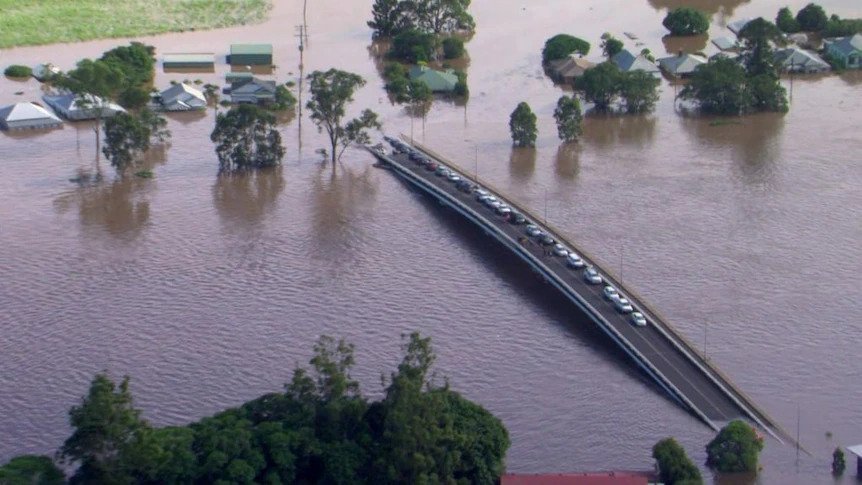 Woodburn bridge over the Richmond

Fortunately, our home fared better than most in our street. Martin, our neighbour a kilometre up the road, has to rebuild everything inside his house. His new yacht stands impaled on a jetty pylon, its bum in the water, a monument to man’s foolish disregard for Nature. 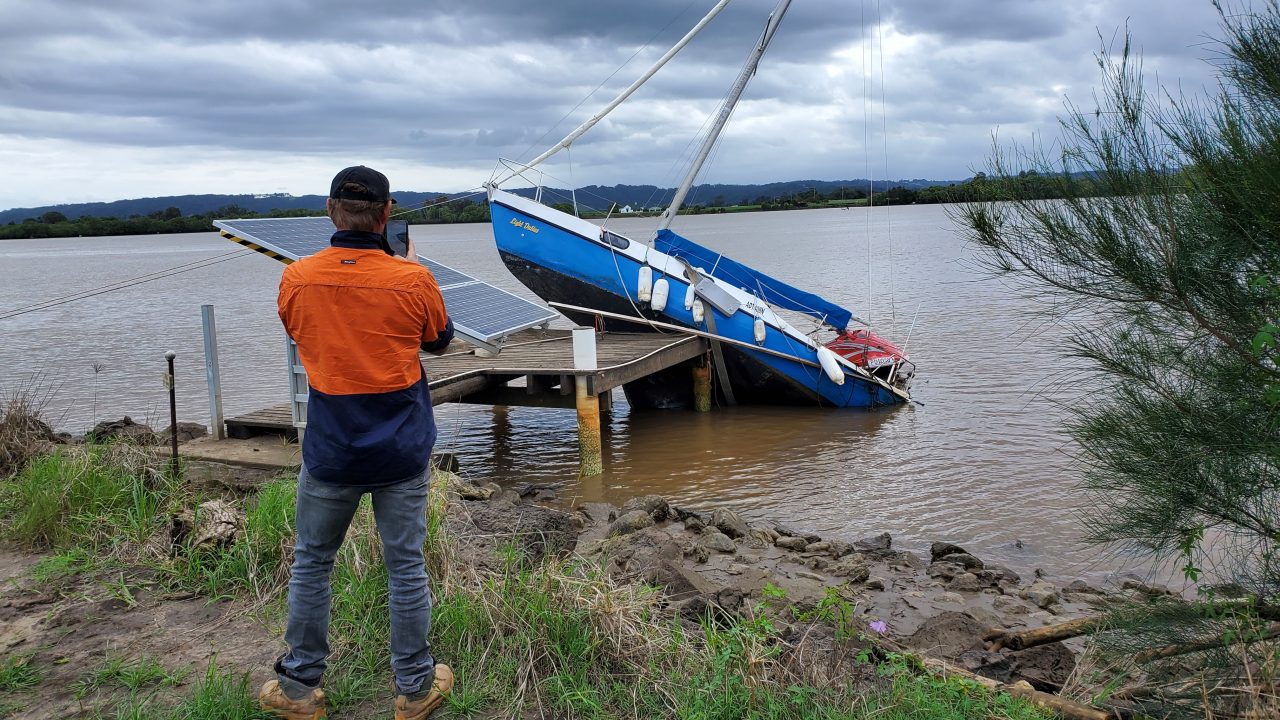 Our neighbour, in the original farmhouse built 140 years ago, and never-ever flooded, is the same—total rebuild. Gary, our paraplegic postman, had to be rescued by tinny in a frightening experience, barely making headway against raging currents while he was lashed in his wheelchair. His house, which also had never flooded, has to be gutted and rebuilt.

Our heartfelt thanks go to our sons and their partners for being first on the scene after the floodwaters receded. They found an abominable, stinky mess of slippery mud covering all surfaces and inundating our precious keepsakes and household chattels. They worked tirelessly to reclaim as much as they could, helped by the volunteer fire services. Meanwhile, the entire region struggled to cope.

We tried to warn officials ~
Last year, we tried in vain to alert the authorities that the river was so impacted by sand, a devastating flood was imminent. The total catchment of the Wilson and Richmond Rivers discharges into the sea at Ballina and must get out through its barred river mouth. That river bar has not been dredged in nearly thirty years – the last time in 1993. We have firsthand experience of the river bar becoming more impacted, making it the most dangerous on the coast. We have also watched the slower moving river flow dump sand onto banks increasing in size, further slowing river flow. But the many politicians we contacted did not heed the warnings of master mariners with thousands of sea miles experience, in addition to living alongside the river for thirty years. 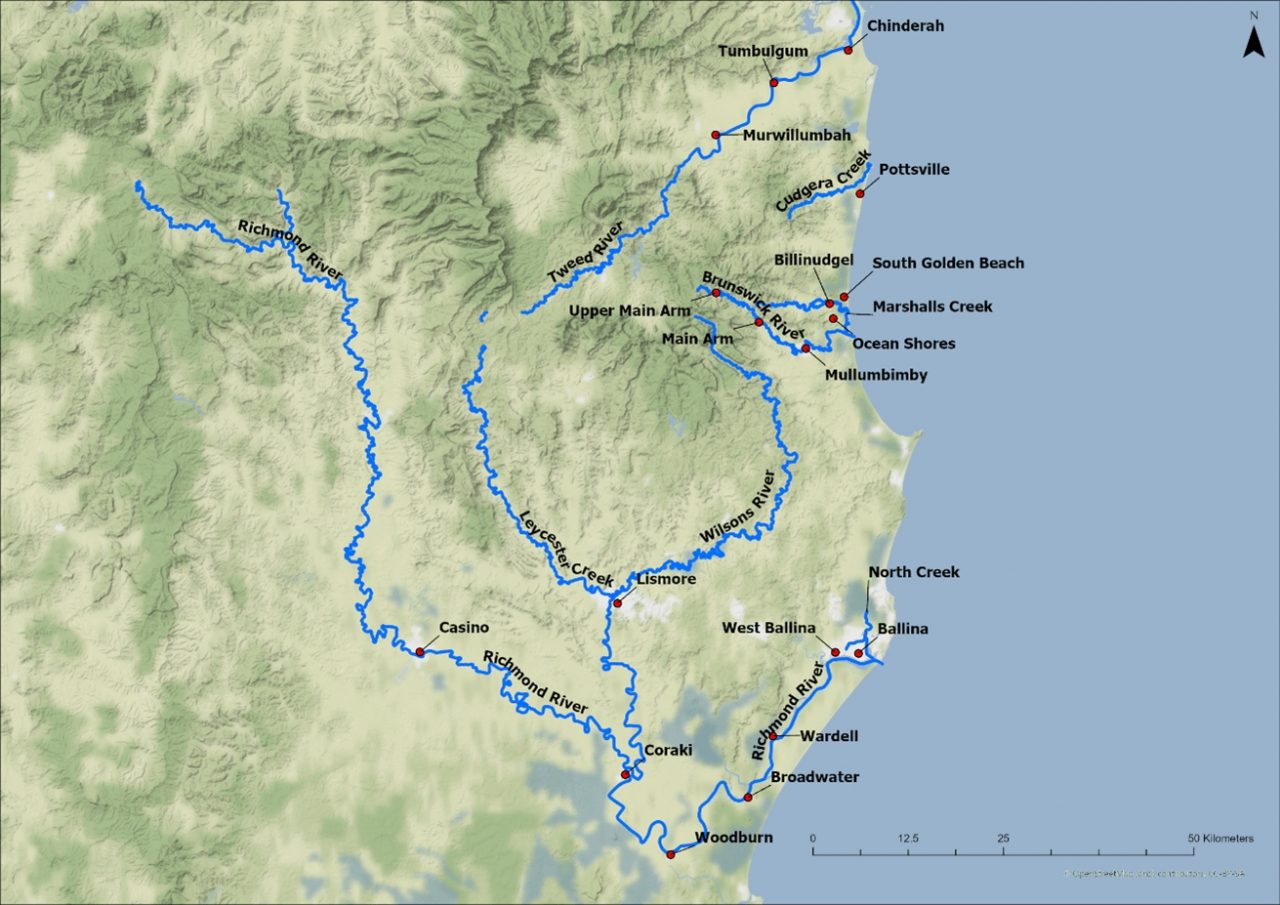 Climate Change ~
During our five decades of exploring Earth, Jack and Jude have seen an expansive array of its oceans and lands. In our travels, we recorded massive tracts of Nature land harvested or bulldozed for farms and housing for the growing mass of new humans. Like many of you, we’ve also seen the decline of so many species and loss of habitat reaching critical proportions while human pollution has changed the balance of the Earth.

In our years of travelling and sailing, we found plenty of solitude, leaving us time to reflect upon what we were witnessing. As a result, a philosophy evolved that we find comforting as our time on Earth shortens. Sailing the equivalent of five times around Earth gave us perspective. Besides human’s impact on land, we recorded oceans being robbed of most of its life and observed increased human waste polluting isolated islands. While witnessing this, many times we survived Nature’s fury and we’re impressed by its awesome power. We found there was beauty then, and at other times, spectacular moments of intricate beauty like the heart of a rose or spider web dangling morning dew. From that came to us what it’s all about.

Earth is the tangible proof of the Creator ~
Our world has many religions. Many millions believe Mohammed is the link, others believe Jehovah, still others believe Jesus Christ is the link to the creator. We say follow them if they comfort you. But Jack and Jude see Earth as the creation and proof of a far greater power than humans can understand,. And we take solace from that. Humans created conventional religions. And over time, they were split into variants. These many sects divide humanity. They cause wars and cruelty, and have allowed the destruction of Earth and her wild creatures.

Put Earth First is our creed, and we hope to spread that thought to as many as we can. Because we know from firsthand experience that the wonders of Earth are real, tangible, and unique in the universe. And that we humans are also unique. Why? Well, it could very well be the creator has set up a test. Do we cherish the creation? – Or do we cherish ourselves more? So far, we’re loving ourselves far more than Earth. And just maybe, the creator is turning up the heat — literally….

If those thoughts make sense to you, then join us and share them with your children and loved ones and friends. Our goal is to limit human numbers and restore the wild kingdom to rebalance Earth and bring a richer, more satisfying existence for our children and the future.

Till next time, be happy, and safe.

All books NEW and Undamaged

These books can be signed upon request