Sailing Off The Edge 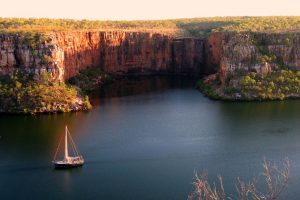 Imagine you’re sailing across a strange red world, the only souls for miles around, and deep within a chasm with a dry waterfall stained like old dried blood right in front. But you feel totally at ease, safe and protected on board your vessel that’s surrounded by alien rock art showing a graceful, proud race, with long limbs and flowing garb who look so real in ceremonial and hunting scenes that go back to the beginning of time. Now pinch yourself. Are you dreaming? Or could it be you’ve overcome the dangers blocking the entry into this little known Kimberley River.

After gaining access through the confused web of mudflats, doorway to this fantasyland of contrast home to crocodiles larger than your tender, you can anchor right next to a waterfall and dance naked under its flow if that takes your fancy. And if you’re resourceful, walk across untouched land to climb a flat plateau to trace the gorge through the amazing landscape. Or simply park anywhere you like because Earth’s greatness is everywhere in sight. 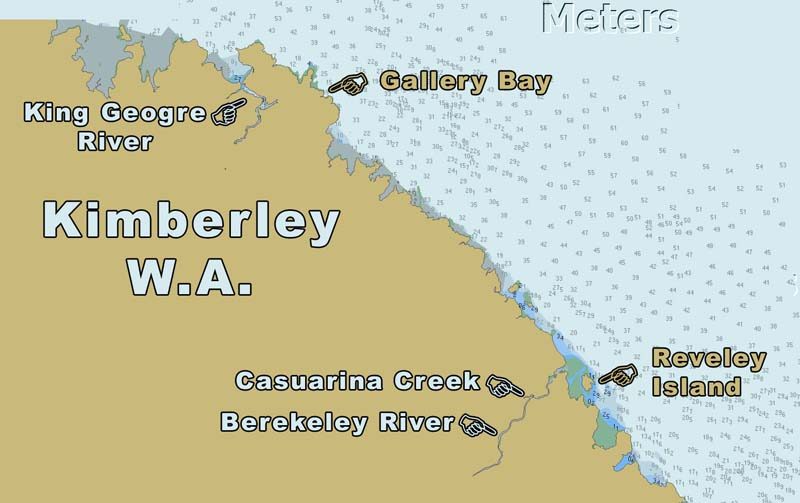 There are two approaches to the gateway of the Berkeley River, both best undertaken during the last hours of a rising tide. The first is head-on from the Bonaparte Gulf which can be dangerous if tradewinds have built up an onshore swell. The second approach is from behind the protection of Reveley Island, south of the entrance. That’s the route the cruise ship True North takes and she draws 2.2 M. If unsure, anchor in Reveley’s lee to check out the drying flats at low tide. Our website has the co-coordinates Banyandah followed, but keep in mind that wet seasons can change the course of Kimberley rivers.

Once inside, head upstream keeping to the outside of bends to approximately mile 5 where Casuarina Creek joins the Berkeley. The confluence provides an excellent all weather anchorage 10 m deep with a tidal range of 4 m.

At half tide rising head up Casuarina Creek, mid channel, equidistant to the trees, except around the only bend. Passing it, the vertical falls will appear, hopefully pouring more than expected water even midway through the dry season. Smack dab in the middle of the oval lagoon is a cute little island. We plonked our anchor down central in the basin then rowed mooring lines out, securing the bow to a convenient tree on the island while alert for crocs, and the aft line to a huge boulder next to the falls. Under the falls is a rock shelf convenient for a cooling shower. The noise echoing off the surrounding cliffs is awesome. 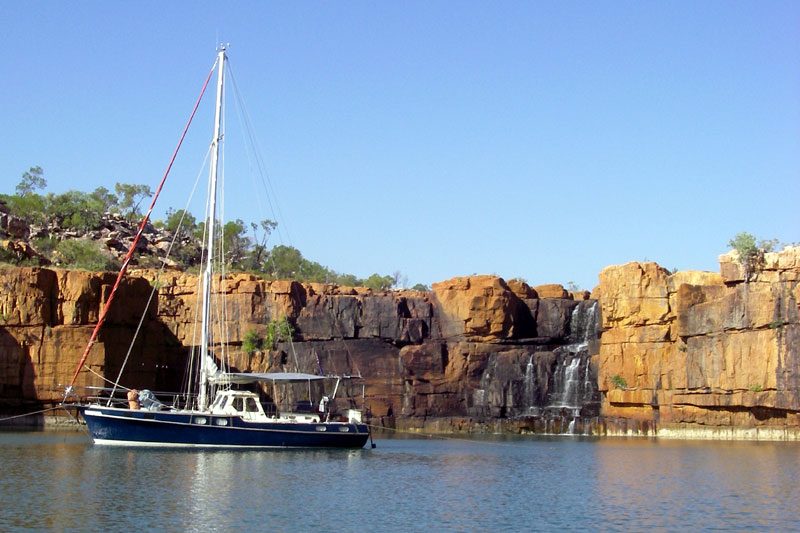 After scaling the rock scree found on the bend, the area is relatively flat. Only Mt Casuarina’s flat top a few kilometres away breaks the horizon of bushes and stunted eucalypts. Take care over loose rock and spinifex grasses that jab your legs when following the small stone cairns towards the upper falls to several inviting pools. Take the plunge safe from crocs, wash away the sweat, and be mind boggled by looking over the edge. You’ll see your vessel below suspended above a pool of blue, like a jewel between island and rock face. 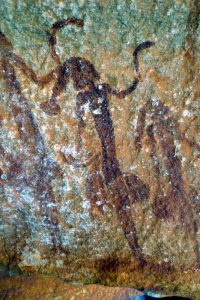 Going upstream, Bradshaw rock art can be found overlooking the pools on the larger flat rock faces not exposed to the elements. In crimson red on yellow sandstone a proud race is depicted with armlets and fancy hairdos, and hunters holding boomerangs and spears with some animals they’ve hunted; goannas, kangaroos, turtle. The experienced can easily reach Mount Casuarina on this trek.

Returning to the river and travelling upstream, vertical red walls replace the mangroves and edge closer like some sort of gigantic press. Around each bend they seem to grow taller until you’re looking straight up at giant building blocks stacked one atop another. Over the millenniums Nature has taken a slice out Earth and formed a flat canal with walls you can touch without getting anywhere near the bottom.

Perspective is increased when the sun dips towards the western wall, casting shadows that reveal numerous gashes and the enormous size of the building blocks. You’ll marvel at the colour and contrast, so set up your tripod and camera and record the marvellous scenes in front row seats. 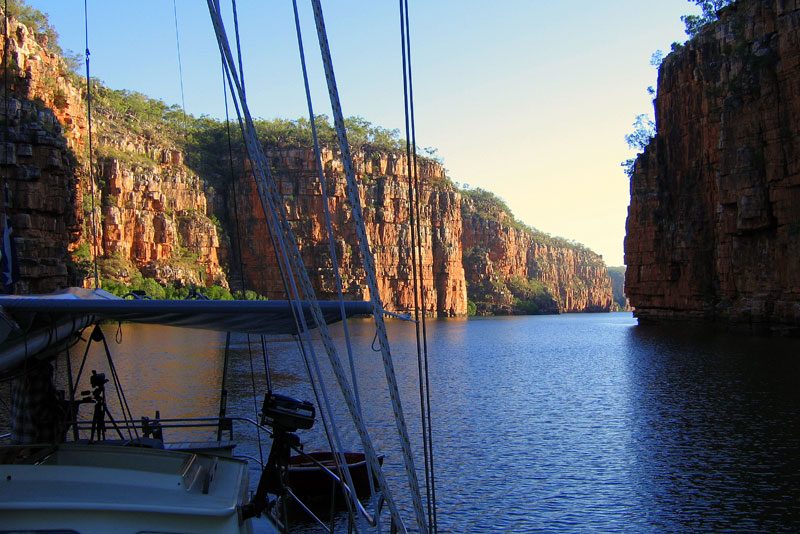 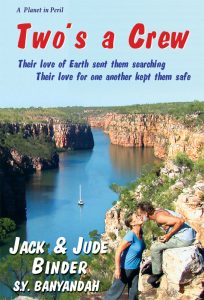 Spectacular photo opportunities abound in the Berkeley. Red upon red slashed with green vegetation makes quite an impression at the Red Amphitheatre, two waterfalls side by side in separate round chasms. At first light we climbed the loose scree opposite the falls then pushed through spinifex to gain the flats to find Banyandah floating far below on the dark blue river with the crimson gorge rising behind. As the light changes when the sun breasts the eastern rim, you’ll see the actual watercourses, the shadows graphical showing the story of erosion.

A short run downstream to where the Berkeley zigs then zags at the ‘Z’, just past them on the western side another rocky slope can be climbed if you are cautious. It leads to a plateau with a perfect view of your vessel in front of the Z’s, just like the cover of our first book. 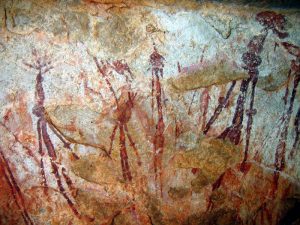 What? You say you want more! Well, if rock art takes your fancy as it does ours, a few hours northwest up the coast is Gallery Bay where we imagined the Flintstones lived in a collection of caves decorated with the most amazing art created thirty or forty thousand years ago.

Till next time, be bold and brave, but above all be prepared to look after yourselves.