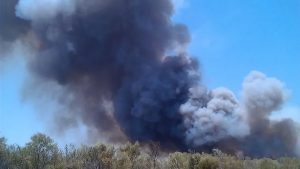 After two extensive tours of the Kimberley by sea and land, Jack and Jude are passionate to preserve this unique area of Earth and were therefore greatly distressed to learn from our friend, tour guide Russel Willis, that huge chunks of that land are being altered by man made fires. Here is Russell’s alarming report –
Willis’s Walkabouts Newsletter 91, August 2017 — Killing the Country
Burning Issues
Not a single blade of grass, not one live small shrub to be seen. This is what we saw in large areas of our recent trip to the Prince Regent area. When we were flying out at the beginning of July, we saw plumes of smoke from the still-burning fires that had been deliberately lit.

We saw it again in Kakadu. This is what’s happening to large parts of the Kimberley. Land managers are so keen to burn the country that they will no longer allow people into several parks before 10 June. We can no longer offer some of the best trips we’ve ever done. Why are they so keen to burn? They get paid to do so. 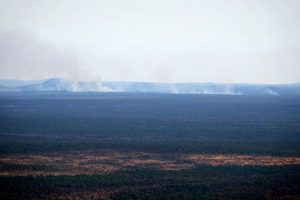 When we flew out from a Kimberley walk on 1 July, we could see dozens of fires, all man-made.

Here’s the Qantas claim. Reinvigorating indigenous traditions. “This project is managed by Indigenous land owners in the North Kimberley who are reducing emissions through traditional fire management techniques.” Pardon me, that’s bullshit. When I flew out from a Kimberley walk on 1 July, we could see dozens of fires, all man-made, burning huge areas.

Here are two quotes from a letter to Qantas from someone who’s seen the disaster first hand.

I urge you to click here and read the full letter. Needless to say, the letter hasn’t even been acknowledged.

Just how bad is it?

It’s continuing. The North Australia and Rangelands Fire Information website has a map of 2017 fires. Click WA Kimberley on the left menu to get the map. Click NT North and you’ll see that it’s just as bad in the Top End. You can scroll in or out to get as much detail as you’d like.

It gets worse: Replacing trees and shrubs with grass.

Woody shrubs and trees store more carbon than grass. Grass burns faster, hotter and kills more shrubs and trees when it burns than leaf litter does.* Qantas supported burning practices are replacing trees and shrubs with grass. Your carbon offset dollars helped pay for the fires shown in the photo here. They increase Australia’s CO2 emissions.

* If you are keen you can read the 14 page scientific paper that proved this here.

Go to the Qantas Facebook page and leave a comment saying that Qantas’ funding of indigenous groups to drop fire bombs out of aircraft has nothing to do with “traditional fire management techniques” and increases Australia’s overall CO2 emissions.

Any organisation that uses carbon offset dollars to increase carbon emissions and destroy the landscape needs to be called to account.

If you are willing to do more, have a look at John’s letter to the EPA. It shows just how many laws are being ignored. Send the WA EPA and minister your own letter or email. If you live in WA, make sure you include your address. Better still, send the same message to your local member.

To make it a bit easier, here is a Word document with contact information and paragraphs you can cut and paste as desired.

If people don’t start speaking up now, we won’t have any decent places left for our walks. If you do contact the EPA or minister please let us know so we can have some idea as to how many people are speaking out. Thank you.