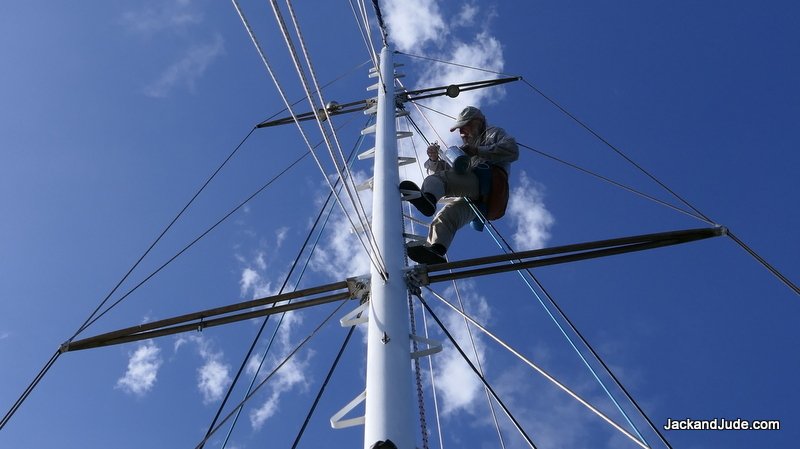 Sailing Tomorrow ~
This’ll have to be swift. Tomorrow, we’re sailing off into the never-never. Goodness knows when we’ll have communications again. Next stop, the fabulous Furneaux Group of islands in Bass Strait, just off Tasmania’s Northeast tip. 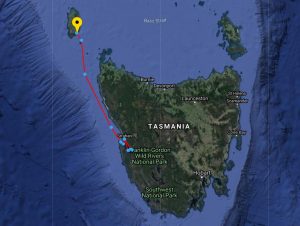 Plenty of Sea Miles since last report ~
Starting with a fast overnight voyage from Strahan to Grassy Harbour on King Island, dodging shoals off Tasmania’s northwest tip as the Southern Cross drew overhead, and then passing east of Reid Rocks to take advantage of the forecast morning shift of wind to sail straight into Omgah Pass under full sail. Once on the island, we enjoyed a few marvellous days with dear friends and had one heck of a dinner party.

King Island ~
On King, we’re never bored. Strong Easterlies in the harbour make for a stiff row ashore and being able to borrow a car we enjoyed a sumptuous visual treat on the other side of the island, atop the sheer cliffs at Seal Rocks, before miles of blue Bass Strait that ends abruptly by crashing into jagged shore rocks. 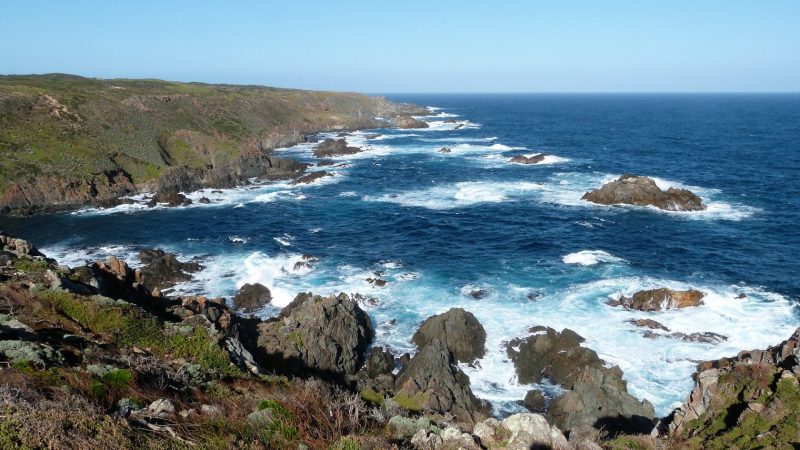 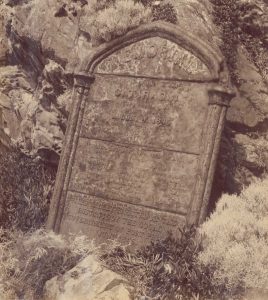 Stone tablet for those who perished.

Many lives were sniffed out on black windy nights at King Island. Just up the coast from Seal Rocks is the monument to the 400 who lost their last breath on the last night of a four-month voyage to the promised land on board the Cataraqui. A horrendous winter morning in August 1845, tragedy struck at the ungodly hour of 0430. Australia’s deadliest maritime civil disaster, for it was not simply drowning, but being cruelly dashed against jagged rocks on foaming waves between the vessel and shore.

More than a century later, in August of 1978, Jack and Jude came to know about winter and Bass Strait on a voyage from Albany to Eden with our two little sons on board Banyandah.   A half mile between fifty footers, the tops roaring white like the Pipeline at its wildest. Don’t look back. A strong grip looking ahead.
Here’s a short clip of the Four J’s in action back then. 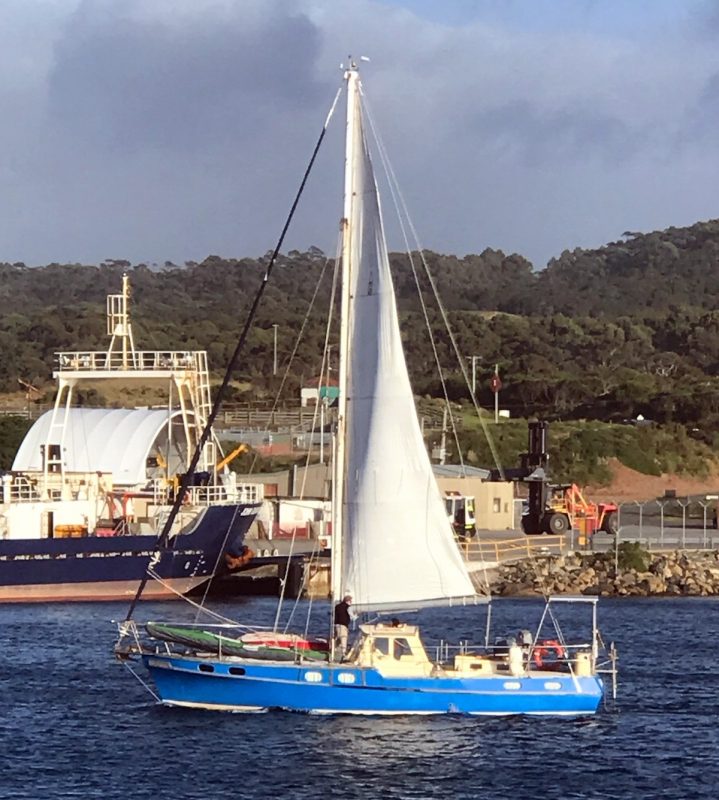 Too Many Easterlies ~
We suffered one too many easterly events in Grassy Harbour. The shore losses its appeal when white water stands in the way. While safe on a mooring, it’s noisy, especially as it blows all night, unsettling our rest. Then a westerly came, so we escaped before the next bout of east winds could strike. 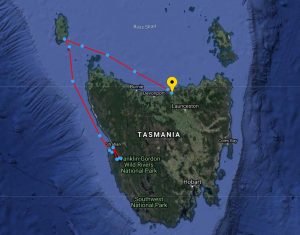 Zoom, off early, driven by a tailwind, bound for Three Hummock Island, which we passed around dinnertime, and kept right on sailing under a starry night finding calmer waters off Tasmania’s north coast. First morning light shone down upon the towering knob of Low Heads directly off our bow. We sailed so much for the fun and challegne, taking simple pleasure in managing our craft by natural forces to have our anchor down in the quiet waters off Kelso by 0900.

Wanting peace for a few days to complete a writing assignment best in the solitude of Banyandah in a lonely anchorage. My piece, titled ‘Discovering Lost History,’ tells the story of our finding the historic Goulds Track. Then this coming Monday, the lovely folks at the George Town Yacht Club will let us hire their pontoon to do some much needed boat maintenance. 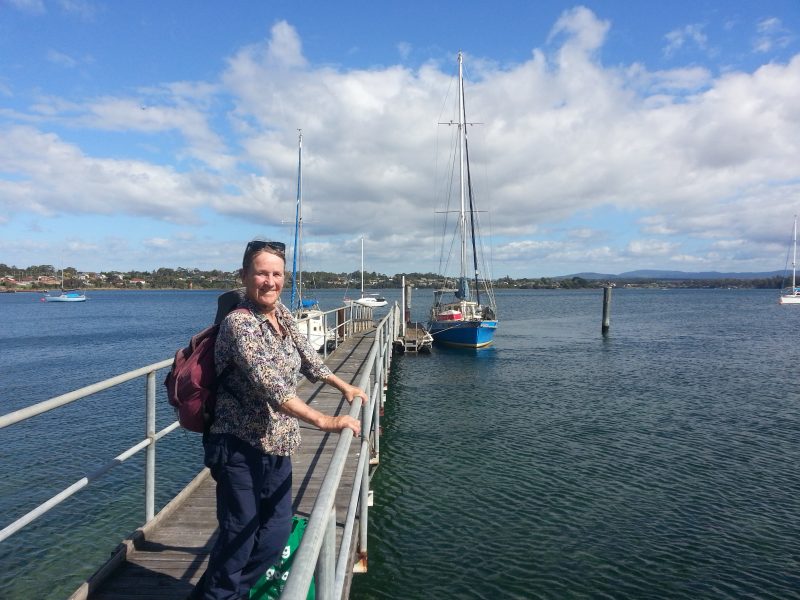 Who has done this ~
Raise your hand if you’ve ever painted a 15 m tall mast while swinging on a thread from the masthead. Jack did, at 76 years young. Pretty good, hey? Not once up and down. But five times! Two to three hours aloft each stint. Clean and prepare, then anti-corrosion primed where needed. Then an enamel primer followed by two coats of gloss enamel. 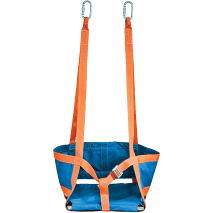 We had a stupendously good routine. Jack wore his night-watch harness and sat in our padded bosun’s chair strung from the main halyard, which he modified by adding an extra block just in case the main one shattered. Once rigged, and dressed in long sleeves and trousers, he climbed the mast using the steps that go to the masthead, while I took up the slack.

We communicated every movement back and forth to confirm the readiness of releasing, and lowering, and securing the line. When re-securing his safety line, usually from one step to another, Jack took his weight and clung to a shroud, spreader, or a step. Once secure, he could work confidently. But he found it a tiring ordeal, using his legs to hold him in position while cleaning and painting. Poor Jack. Not a kid anymore, he felt much better after an hour or two stretched out like a zombie.

Anyway, the job’s done. Looks smashing. Should protect our spar for as long as our log keeps recording adventures.

Next stop – Furneaux Group ~
We’re on our way to the Furneaux Group, with a flexible plan. Re-visit the Sydney Cove resting spot at Preservation Island once again. It’s a fabulous walk across impressive granite-tor country to a spectacular historical location. Watch our YouTube video and you’ll know why we drop in whenever in the neighbourhood. We’re looking forward to some yummy flathead fish dinners, so we might pop into Jamieson Bay at the far southeast corner of Cape Barren Island. That’s where the gods make wind by dancing atop mount Kerford, so the locals tell us. In March 1773,Tobias Furneaux in HMS Adventure, named the south-eastern point of the island “Cape Barren”. 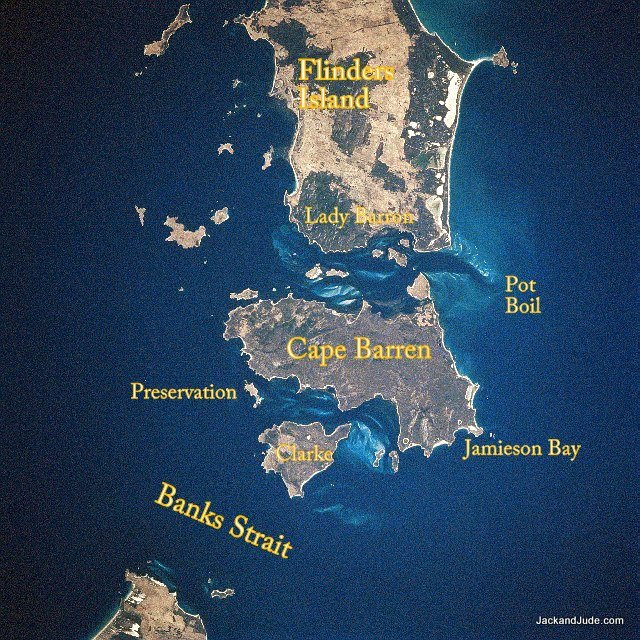 Explore the Unexplored ~
Other than that we just might poke our bow into a few unexplored bays and chance Pot Boil shoals to enter Lady Barron in a quiet spell to go walkabout on Flinders. Tune in next time to find out.

Until next time – stay safe – and together, we’ll beat this pandemic.