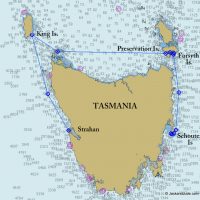 The westerly winds had blown strongly for days creating steep dangerous seas in the narrow passage leading out Armstrong Passage into Banks Strait. And that created a dilemma for us wanting to passage many miles down Tasmania’s east coast. As there are no all-weather anchorages on that stretch of rugged coast we didn’t intend stopping before reaching Schouten Passage at the southern end of the Freycinet Peninsula; and if we still had fair winds and felt full of vigour after a night at sea then we’d sail further on than those 120 nautical miles. But, getting out and through Banks Strait was our problem, especially with the wind and tide out of sync for a timely departure. Therefore, we decided to mosey further east to a pair of islands lying just before the much-feared Sea Lion Passage. Strong currents run east and west through it, which coupled with a sudden steeply rising bottom, creates standing waves whenever strong winds blow as we’d found once before. 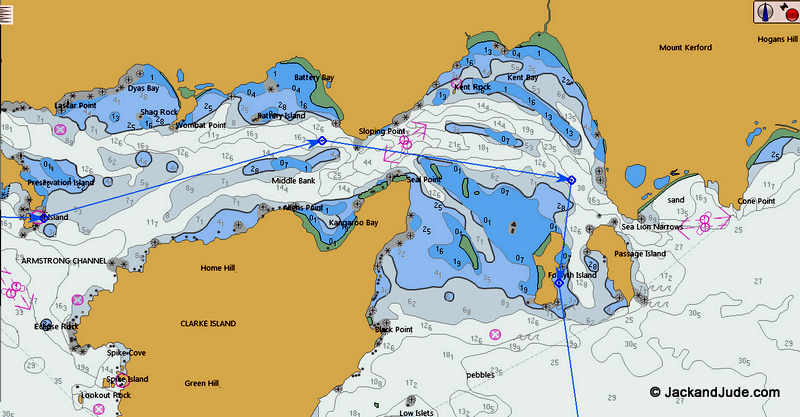 Forsyth and Passage Islands for an easier exit

The islands of Passage and Forsyth run parallel to each other in a north south direction and on the chart they looked perfect to block the westerly winds we were expecting. The question was whether they’d be safe from swell running up from the south. Anxious to find out before the new weather system brought the forecast strong to gale force winds, we sailed deeper into Armstrong Passage, propelled by a poled out headsail, and aided by the ebb tide flowing in our direction.

On the south side of the passage, the largish Clarke Island offered sanctuary in Kangaroo Bay, but bad memories of sheltering in that bay one windy night, dragging all our anchors and none finding a grip in the soft slimy weed, clinched our decision to go onwards to a new location. Our first sight of the twin islands impressed us greatly. Both had forested spines running across the wind instead of flat contours of stony ground like Preservation Island. Filled with hope, we cranked in the headsail, sending Banyandah skirting round the immense sand shoals that span the gap between Clarke and these islands. Fishermen tell us there’s a way through its many shallow miles, but we’ve not looked, nor would we consider doing so in the now worsening conditions.

A first hint of doubt entered our thoughts upon sighting white breakers frosting the northern entrance to the channel. But these beautiful creations brought a smile to our lips as with power and grace they rushed in from the sparkling turquoise sea. It was a rather tense smile wondering what lay ahead, wondering whether we’d be trapped in an untenable location, and be forced to sail on into the rising sea near the edge of Banks Strait. 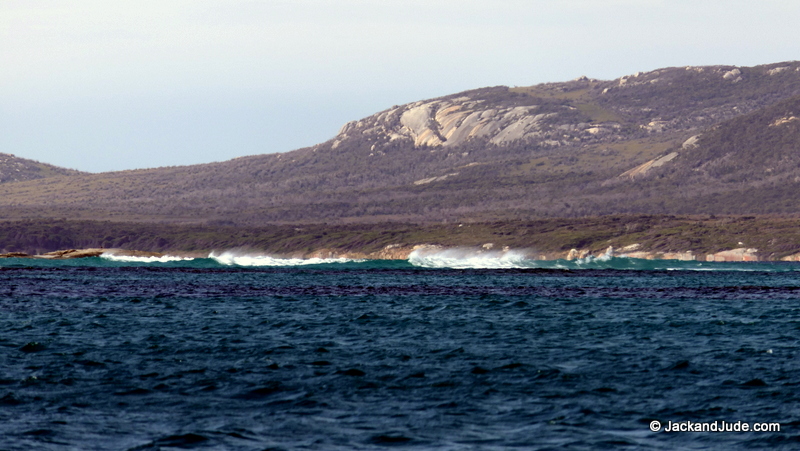 White breakers frosting the northern entrance to the channel

Discovery II
, sail mates and friends for several years, were ahead seeking the same shelter, and it was with quickening hearts that we heard their report on the VHF of steep breaking seas at the cove of our choice. Disturbing news that we took in our stride then carried on with our normal routine.

“Let’s start the engine, furl the sail, and close with shore to look for an alternative anchorage.”

Now within the beautiful setting of twin Islands about a mile and a half in length separated by approximately a mile of sea turned Prussian blue by passing cloud, we could see a wide fringe of shallow sand suddenly rising. And that was not what we wanted, not with the constant swell running up from the south.

Our thoughts were then broken by another report from Discovery II, this one more encouraging. It seems they’d found a passage through shallows to a seven metre deep hole close to shore that was protected from the dangerous swell. Neither elated nor surprised upon hearing this good news as we were taught years ago to take what comes because Nature dictates terms within its realm. Sometimes all is super fine, sometimes it’s gruesome, sometimes it’s so quiet and calm like floating upon silken clouds, other times so powerfully rough we fear for our ship and whisper the mantra “and this too shall pass” in order to stay sane and composed. 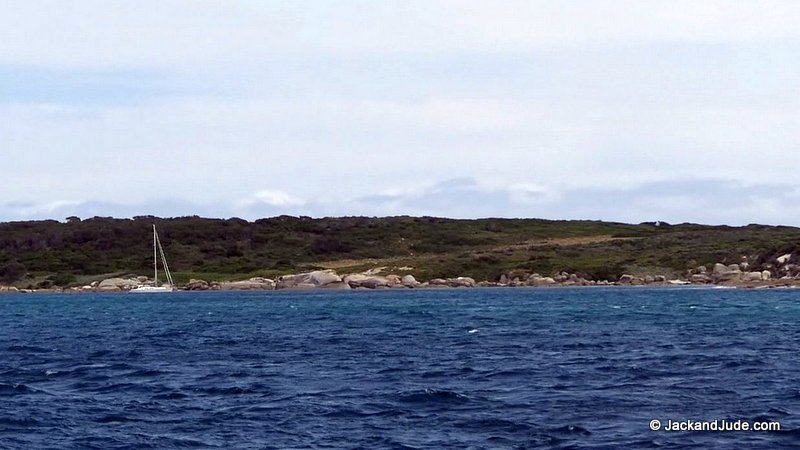 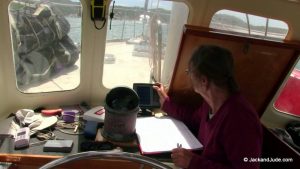 Ahead Discovery II could be seen anchored and gently swaying in the passing sea. In front of them lay dramatic bold rock separated by twin beaches with the sea awash up their steep approach. To this Banyandah was directed, through waters so shallow they rose and peaked until reaching the darker depths. Behind us those rising crests continued rushing forth till forming crests that broke in cascading white that had plumes of spray flying back from whence they came. Only a trifling motion radiated towards our vessels, and so we made a circuitous route to explore what would be our home through dark and windy nights. Twice we stopped our ship to sample water motion and imagine our escape route. There was no haste. Once down, the anchor would need to safely hold us through whatever Nature had in store. 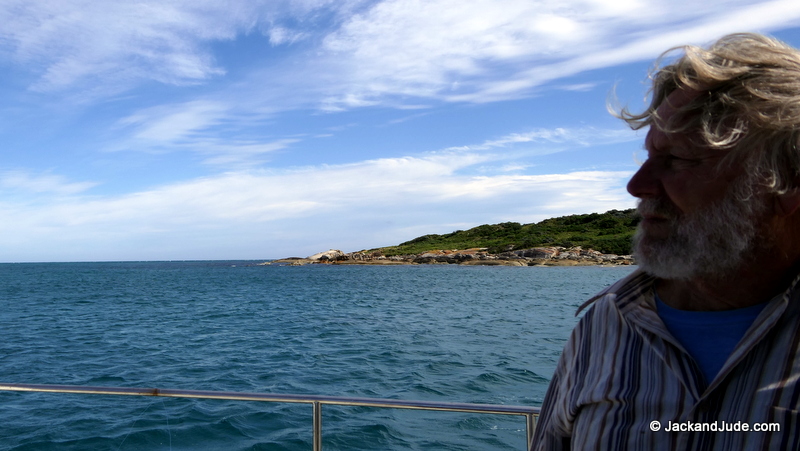 Our chosen spot was close to the larger boulders in the most southern corner, affording us the best protection from the forecast winds and where we thought ran the quietest sea. And once anchored and our ship tidied up, we sat together upon our stern locker witnessing the wonders of this new location. Through the translucent waters we beheld a sand bottom of the highest purity and knew our BOSS anchor would be buried deeply with all our 70 metres of chain laid out. We’d not be dragging from this location.

Orange lichen decorated the larger polished boulders and stood proudly out against the dappled greens of scrubs and medium height trees. Together with the large tracts of manila sand, the scene seemed to come straight from a South Pacific tale, except the cold blasts brought gravity to our situation. 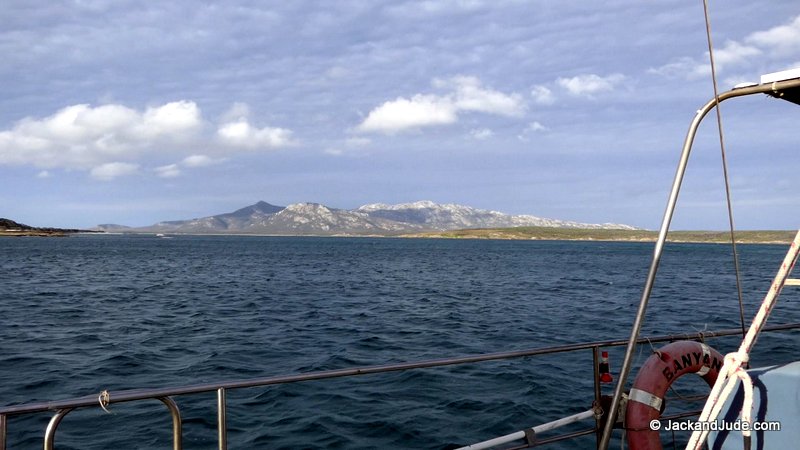 As darkness descended, a slip of blushing moon low in the west amongst a black heaven lit by twinkling starlight brought our new foe of wind. Its blasts, like those of Mohammed Ali, soft like a butterfly before a sting of great impact, caused our ship to groan, straining against her springer. All that long first night we lay listening to its cacophony of might do battle with our ship while every now and then, especially after a great blast, we’d check our station on the chart-plotter. What easy bliss compared to days of old when our only guard was a flashing neon showing depth. 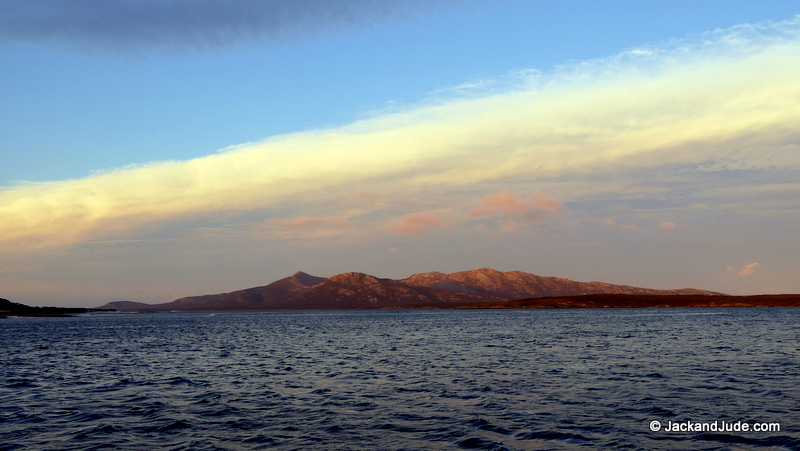 On and off we both slept well until the last hour before dawn when the sea’s motion increased alarmingly. Had the tide changed direction was our thought lying there in light slumber? Whatever caused the change, upon rising, steep seas rushed past just behind us. And our friends on Discovery II were gone.

On channel 77 we made a call and after many seconds of silence filled with concern, to our relief we heard a faint reply. The motion had alarmed them into moving onto an anchorage on Cape Barren Island lying to our north. Checking our position verified that we’d not shifted even a smidgen. As our next destination lay south of us and that we’d tolerated much worse motion in our time, after observing the mighty surf for a while, we decided to hang there and hope whatever had caused the seas to stiffen would pass. And so it did. By noon we were back to an easy motion, with the wind taking a much deserved break.

But that was not destined to last. As darkness crept in upon us, the beast returned. However, once bitten, we were prepared for its might. Jack shifted forward to sleep on the sole next to the mast, and Jude, well, she can sleep standing up, so we both slept soundly through the night. 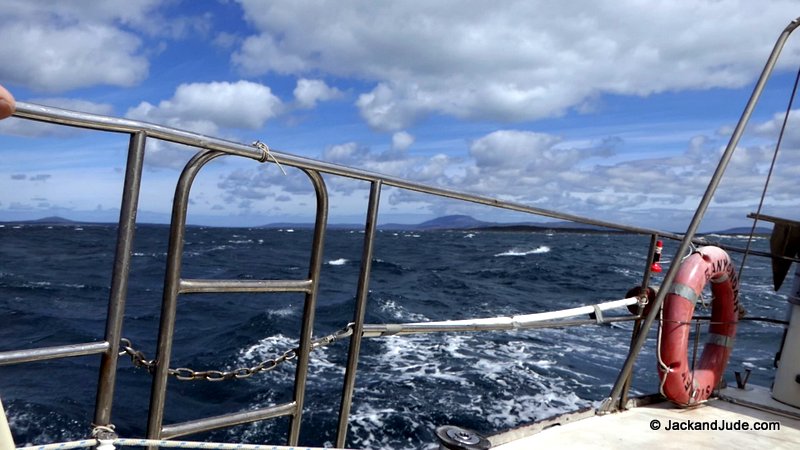 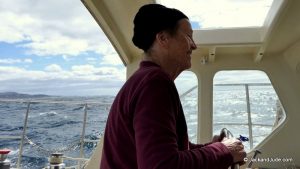 Revelling in the power and might of conning her baby

Next morning, most of it had abated, leaving behind a most perfect sailing breeze. So, after a fast breakfast and quick check over our vessel, we set sail for points south, wondering how the seas would be. In the brilliant sunshine of the new high pressure system we raised our main double reefed and let fly 70% of the furler.  Heeling to the power of cold wind, Banyandah charged out from the confines of those two islands, out into the wide blue sea flecked white. With Jude wearing her best smile, tears of joy on her face, revelling in the power and might of conning her baby, I didn’t dare suggest we engage Sir Aries until she exhausted her lust for this.

The following day and night were some of our finest moments under sail. At times, closeted within the protection of Macquarie Harbour, we had wondered if we could still manage such forces safely, and doubts had crept in as age creeps into our bones. But this voyage has proved that unimportant. Whether we can manage is secondary to tasting the finest moments of life. Why die wondering when Nature awaits in all its glory. Please, please, young ones of the world unite to stop the destruction of this creation Earth, otherwise you will be left wanting. Take the challenge, gain knowledge, gain courage. We did, and so can you, like us, with baby steps that lead to self-glory and fulfilment in a better life. 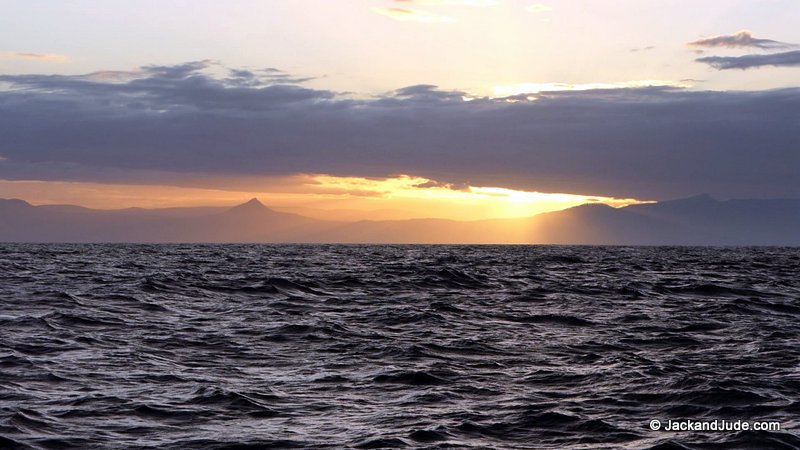