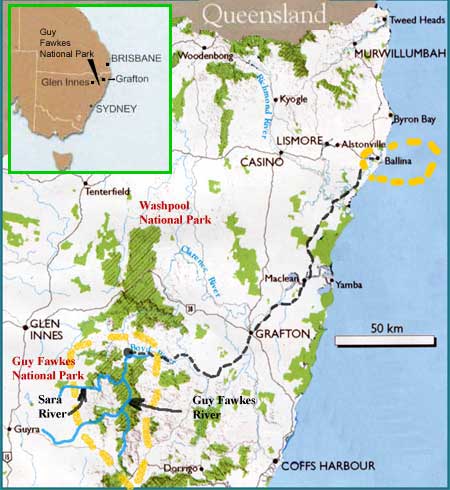 The park is in a rain shadow and does not receive high rainfall, large areas are dominated by open woodland. Yellow box, cabbage gum, red gum and stringy bark cover the stony slopes and ridges.
Tucked into protected gullies on the upper slopes are stands of dry rain-forest, conspicuous from the ridge tops by the darker green of their leaves.

Wildlife is prolific. Marsupials as well as a variety of fauna exist in the near pristine river habitat of the valleys: platypus, turtles, eels, catfish and endangered freshwater cod. Insects abound providing food for the rich aquatic life. On our many walks in this park we have heard and seen brush turkeys, cockatoos & lyrebirds, this time a huge wedge-tailed eagle.

Guy Fawkes National Park is also famous for its brumbies, wild horses who provide many easy tracks to follow.

Arriving in pitch darkness at the deserted township of Dalmorton, we sallied down to the river bed and camped inside our car, and froze. Sunrise found a thick frosty coating. Here we’re at the deserted primary school alongside Broadmeadow homestead, sorting supplies and packing our kit bags. 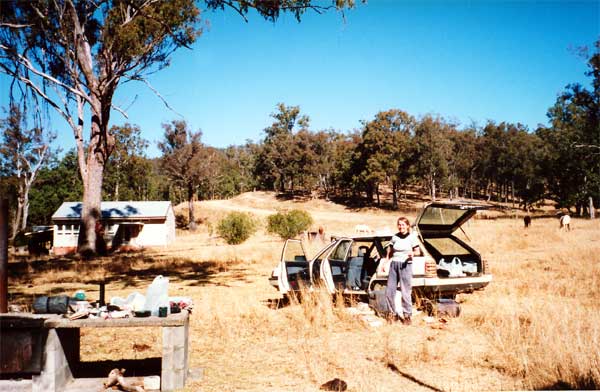 Quite lonely here. Only one passing vehicle and a dozen horses searching for winter feed. Just up the dirt road is a gate onto private property. The owner let us park inside there.

CAMP ONE ~
After leaving the car, we had an hour’s easy hike to the river where stripping off boots, we waded across, then ate lunch. In session two, a two hour stint of riverside walking found us meeting two others, a father and son, camping on a knoll, quite a rare event. But the lowering winter sun cut short our chat. Wishing them well, we were keen to tackle another stretch before finding a camp.

..    After a much warmer night, our first morning on the river was bright and cheerful, filled with birds and an occasional strange yelp. Jack glimpsed a fleet creature across the river where a young marsupial had been feeding. Then a second red fox was sighted when it issued a series of yelps, obviously communicating with it’s mate. 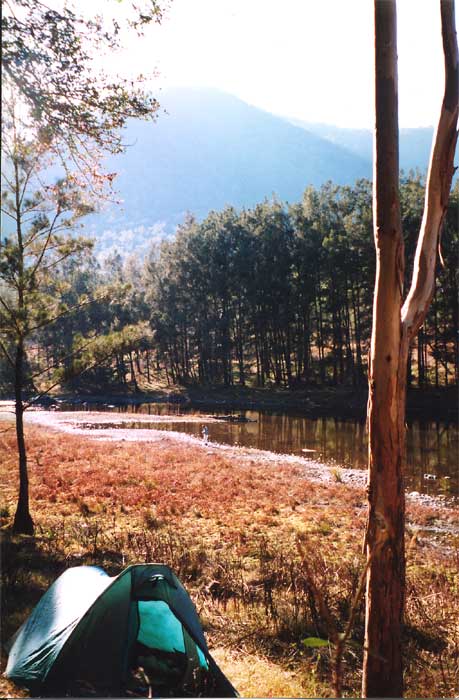 Camp one – Jude investigating the river flats looking for reptilian 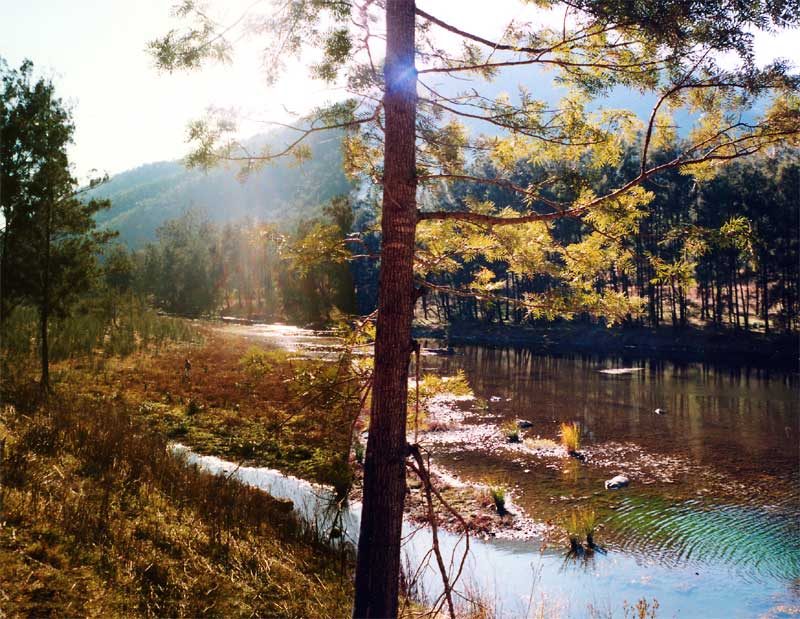 River view at camp one 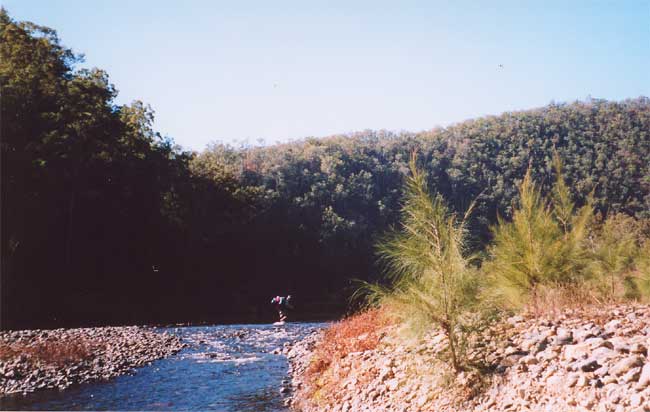 Camp Two ~
On a knoll overlooking the confluence of Guy Fawkes and Sara Rivers.Wild horses came visiting in the night. 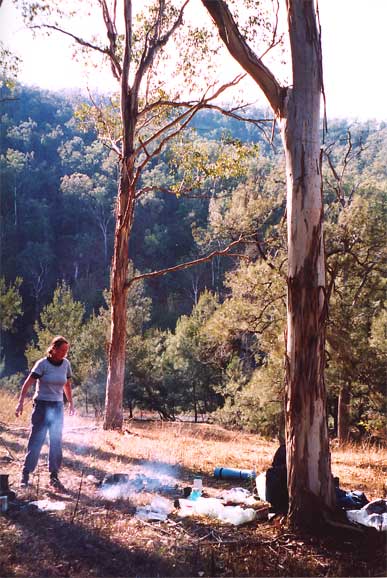 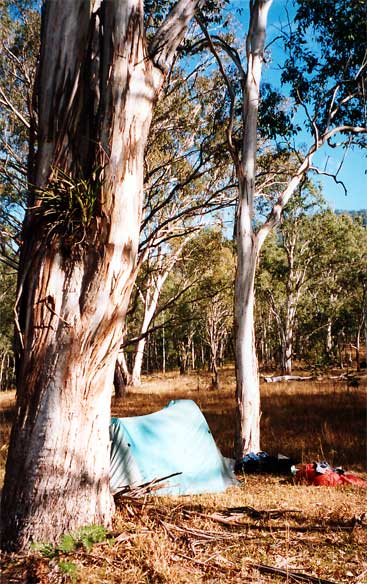 Often called a GOANNA, a startled LACE Monitor, will dart up the nearest tree at astonishing speed, spiraling upwards to a safe spot on the opposite side of the trunk to you. These massive lizards often protect their young by digging a hole in a termite nest to lay their eggs inside. The termites dutifully cover the hole, and the hatchlings are able to burrow their way out. 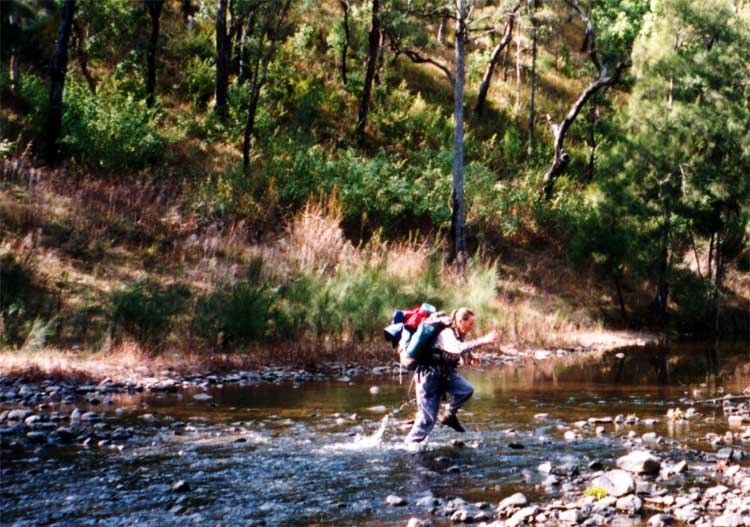 Did Jude’s socks get wet?

Up the Sara River, heading for Ballard Flats and the old gold mining claims. 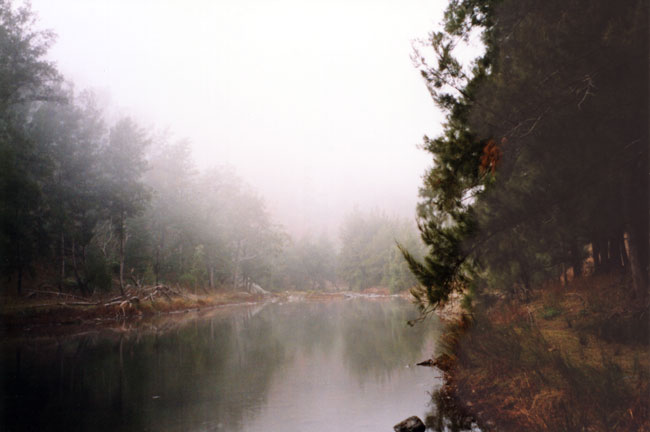 A lonely stretch of the SARA River

Camp Three ~
Shrouded in mist, our fourth morning began snug & warm in our sleeping bags while Black Cockatoos screeched high above in treetops. I poked my head out, saw the thick mist and turned over. But, alas, a bulging bladder and our date with a mountain got me out to light a warming fire.

The day before, instead of trooping on to Ballard Flats and the abandoned gold fields, we decided to investigate a side stream and then return to our vehicle via BLACK MOUNTAIN.

Our next camp would be dry as it was on top of a ridge overlooking
the Guy Fawkes Valley, so we filled our bellies with water then
packed 4 litres in our bags as rations for the next 30 hours. 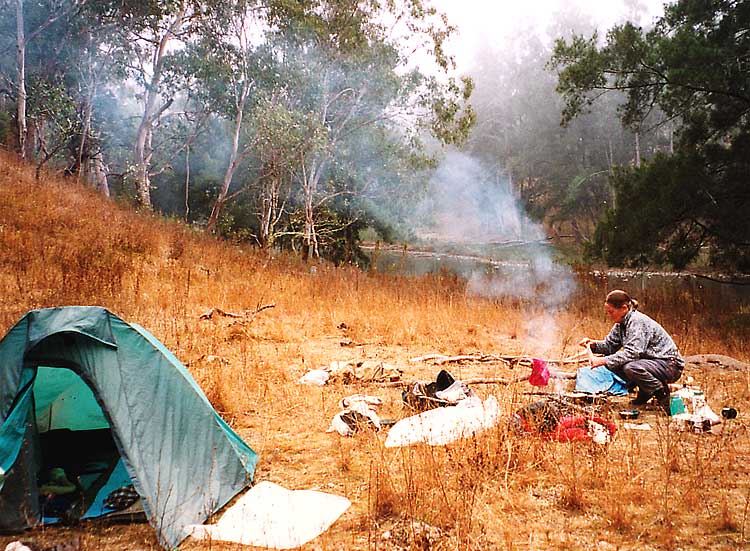 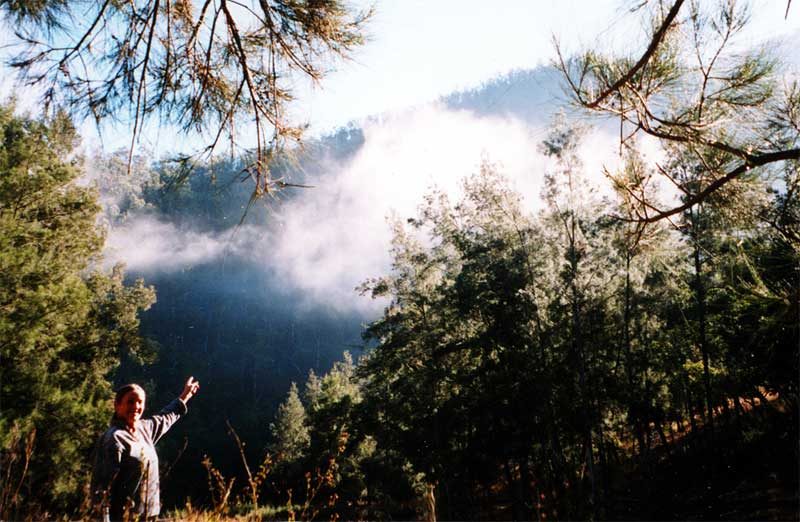 Jude points to the route up Black Mountain

Looking far too eager, Jude points to the ridge leading to BLACK MOUNTAIN and beyond.
The river lay along the 350m contour line while the fire trail leading back to our car peaked at 1050m.
Oh my, a 700m ascent!

I’m catching my breath for the next effort. Fortunately the ridge was mostly clear of obstacles like fallen trees. 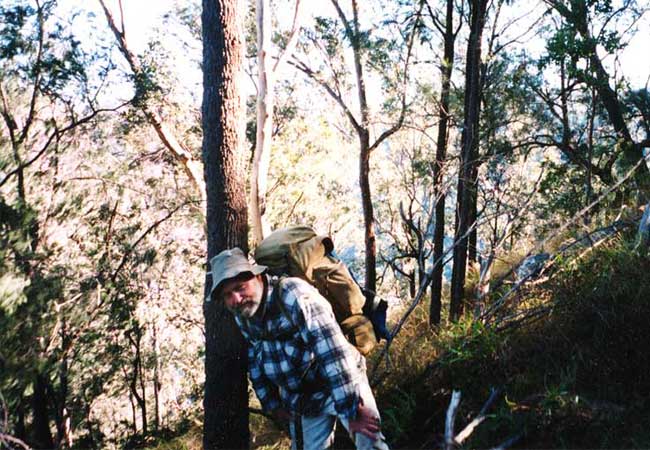 We did the initial 500 m ascent of BLACK MOUNTAIN in 3 hours, then ate lunch under trees madly swaying in strong wind.
Followed by another climb of 200 m to reach the fire trail at around 3:30 PM.
There was still a 6 km walk to Cozy Corner. 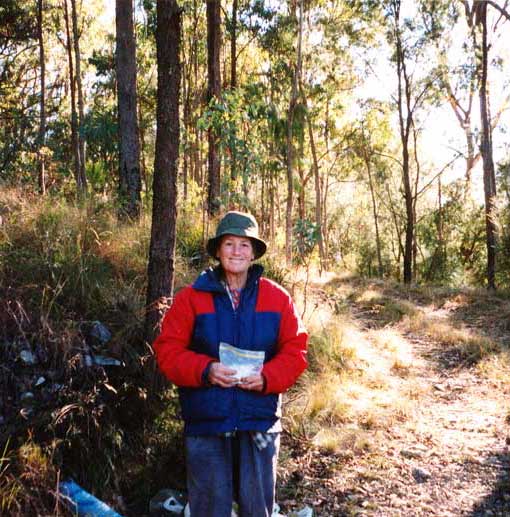 This track loops along the edge of a drop-off with extensive views that are somewhat blocked by trees except to the south.
Strong winds restricted our choice of tent site to behind this bank.

‘GLEN NEVIS LOOKOUT’ locally known as ‘Cozy Corner’ We had entered the valley from the left.
The confluence with the SARA River is hidden by leaves far right 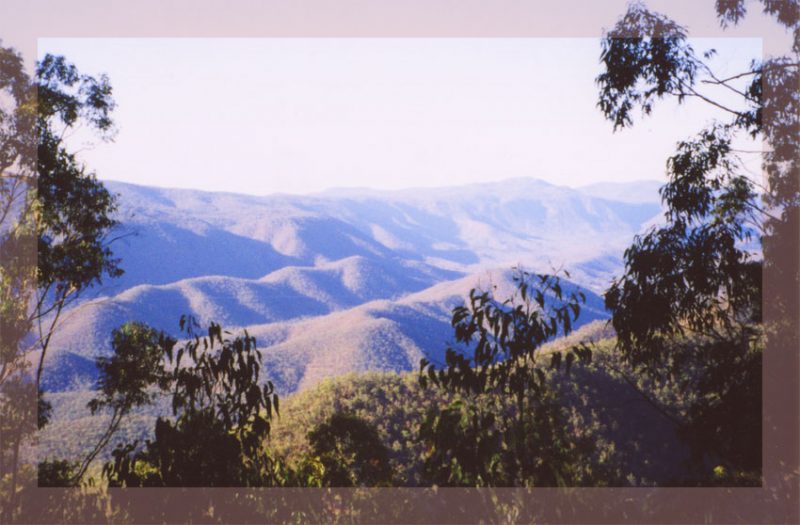 Great spot !
Sitting up in bed saw this view

Trekking out on day five

The Guy Fawkes River Valley lay behind us. We both suffered leg cramps descending from Cozy Corner and we’re limping slightly under the strain. Still, our motto of ‘Use it or lose it’ kept our spirits high because we could still hump a heavy pack up and down hills and flats……