In 1982, Jack and Jude led an amateur radio expedition to Herald’s Beacon, a small sand cay atop Mellish Reef, five hundred miles east of Cairns, Australia’s furthest bit of territory in the Coral Sea. A month before our landing, a cyclone tracked across this low narrow island and the huge seas generated swept over the sand island leaving its surface flat and unbroken except for masses of half-buried seabirds with their necks broken. In reshaping the island, the cyclone’s powerful forces exposed a long buried shelf in which Jack found an embedded bronze eye bolt. Intrigued, this began a search spanning more than three decades.

Research brought to light a great calamity involving the 75 lives aboard the French Frigate Duroc after it ran aground on the seaward edge of an uncharted reef in 1856. Suffering terrible deprivation, through great courage every soul was saved by their own efforts. Three open boats containing 30 men set off for help while the others remained on the tiny island where they built a small boat for the remaining 40, including the ship’s captain, his wife, and small daughter. 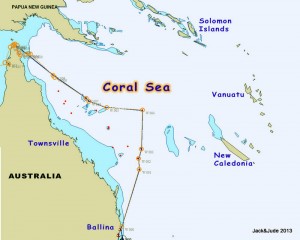 Our research did not pinpoint the exact position of the steam driven Duroc, but it did offer clues. Relaunching our homemade yacht in 2007, we set off for the furthest reaches of the Coral Sea to begin a search for whatever remained of the wooden warship. But calamity struck straightaway. At sea Jack suffered a ruptured appendix and only a dash to hospital saved his life, temporarily ending our quest. Six years later in the winter of 2013, we again sailed away from the Australian mainland to search for the Duroc, and our journey, discoveries, and rich wildlife were recorded in HD video. This video and Coral Sea Cruising Guide resulted from that 2,000 mile, 6 week voyage.