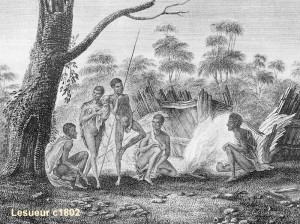 When Abel Tasman became the first European to set eyes on Tasmania in 1642, Aborigines had lived in harmony with the island for 35,000 years. Tasman named it Van Demens Land to honour the East Indies Governor-general who had sent him to discover gold and silver. This signalled the end of the Aborigine’s tenure.

Nearly all the early explorers had some contact with the Aborigines but their visits were brief until the arrival of the French expedition of d’Entrecasteaux (1792) and Baudin (1802) who made a proper scientific study of the people and their customs. But it is thought the Furneaux group was uninhabited when first sighted by Captain Tobias Furneaux in 1773. This soon changed when British and American seal hunters began visiting the Bass Strait islands as well as the north and east coasts of Tasmania from the late 1790s. By about 1800, sealers were regularly left on the uninhabited islands in Bass Strait during the sealing season (November to May). The sealers established semi-permanent camps, which were close enough for the sealers to reach the main island of Tasmania in small boats and so make contact with the Tasmanian Aborigines. Trading relationships developed, and a trade in Aboriginal women soon began. Many Tasmanian Aboriginal women were highly skilled in hunting seals, as well as in obtaining other foods such as seabirds. Some women went willingly but some were taken involuntarily.

After 1803, the population of Aborigines on the main island of Tasmania declined rapidly, primarily through killings by settlers as well as introduced infectious diseases. In addition, those Aborigines who had remained isolated in remote areas were collected and relocated to the Furneaux Group between 1828 and 1834. 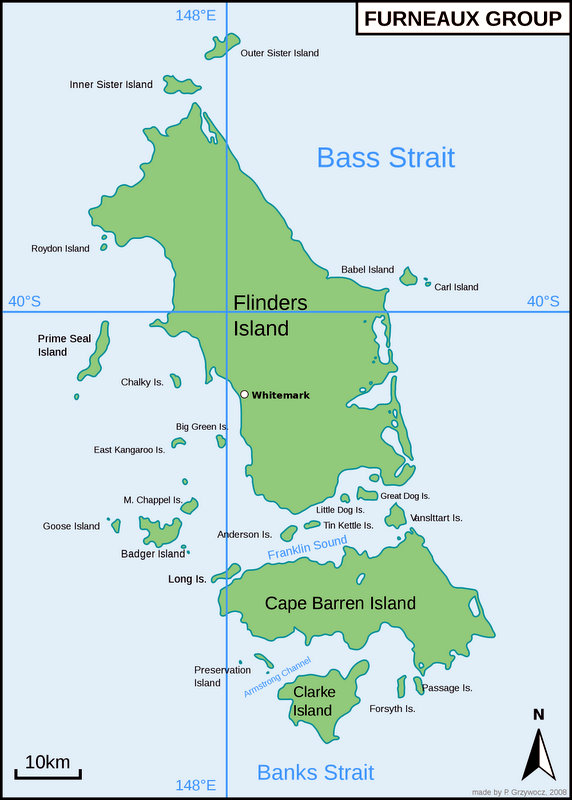 The Furneaux Group contains more than fifty islands, situated in eastern Bass Strait through latitude 40°S in Tasmania’s north-east. Isolation, a turbulent history, and a free-spirited independence add a unique flavour to the group’s largely unspoiled natural beauty. In 2005, the Group had a population of 897 mostly living on the three largest islands of Flinders, Cape Barren, and Clarke. Major industries are fishing, livestock, and tourism. Access is by air and sea. Flinders Island has two main towns: Whitemark, the administrative centre, and Lady Barron, its fishing centre and main port.

The Furneaux Group has a Mediterranean climate but is subject to the Roaring Forties. The mountainous granite backbone supports extensive lowlands and a wide variety of wildlife with over 150 bird species, including muttonbird and Cape Barren goose. 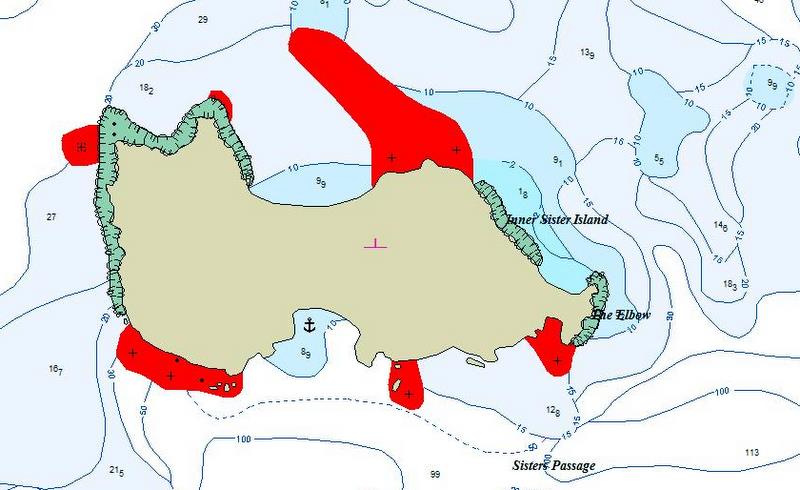 Flinders Island
34 nautical miles long by 18 miles at its widest point, this island has a dramatic and varied landscape. From pink and grey granite cliffs of Strzelecki and Killiecrankie, to the gentle, green farmland that rolls through the northern part of the island. Flinders is prolific with birds and wildlife. The fishing is also really good. However, the downside is many anchorages are over weed, so your choice of anchor is paramount to your peace of mind. Our faithful CQR had a few problems sticking. A few fishermen use the new Manson Supreme with success. Banyandah now has a modified admiralty, with wider sharper flukes. 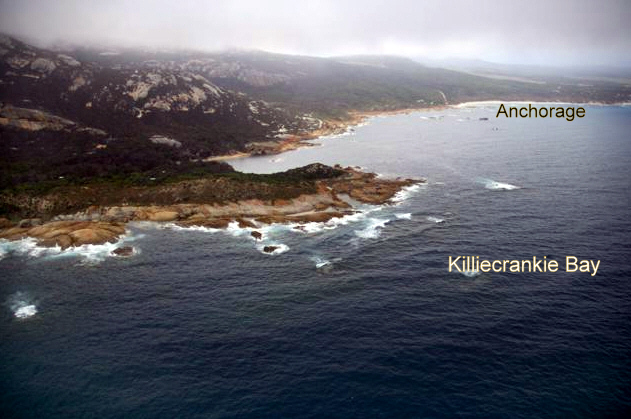 Spit Point on Prime Seal is better in strong northerly.
Must watch for rock 1 ½ cables south of Spit Point.
Shelter SW to N Weed over sand in 4 – 8 m

Settlement Point,
40°01.48’S ~ 147°52.54’E
Choose a calm day or one with north wind.
Anchorage shallow with weed, a rock lies nearby to the SE.
One of the main reasons for coming to Flinders is to witness the final resting place for the first and oldest people to live the furthest south.
Behind Settlement Point lie the remains of Wybaleena, or Black Man’s Houses established by Robinson in 1832, where mainland Tasmanians were Europeanised, trained to speak English and eat western food. Naturally most died. 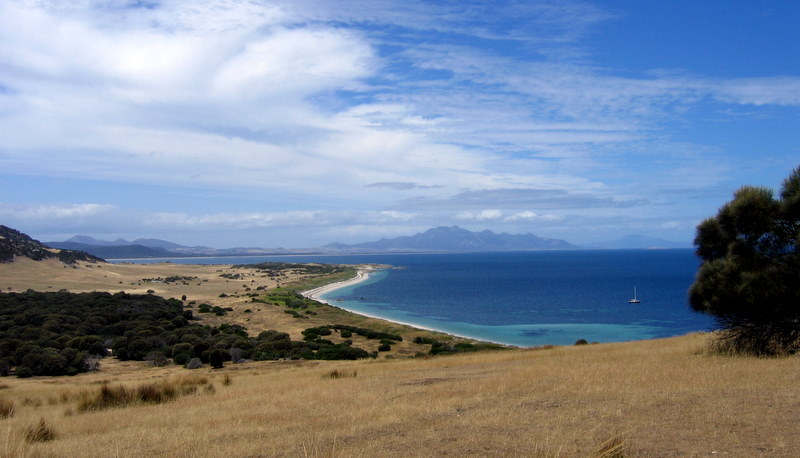 Banyandah from Settlement Point with Strzelecki behind

Land next to the derelict jetty once used to disembark these once proud people, then walk over the grass flatland to the restored church and piles of rubble marking their houses. You’ll pass by the cemetery where the Aboriginal bones were exhumed then shipped around the world for scrutiny. We guarantee a moving experience. 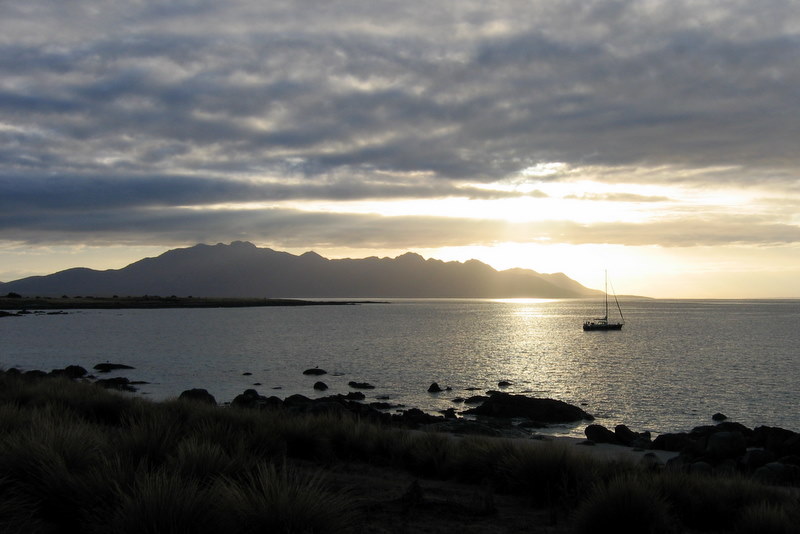 At Laughtons Beach on east side of East Kangaroo Island,
Shelter from SW to NW in 6 – 9 m weed over sand but watch rocks on northern point. Derelict homestead. 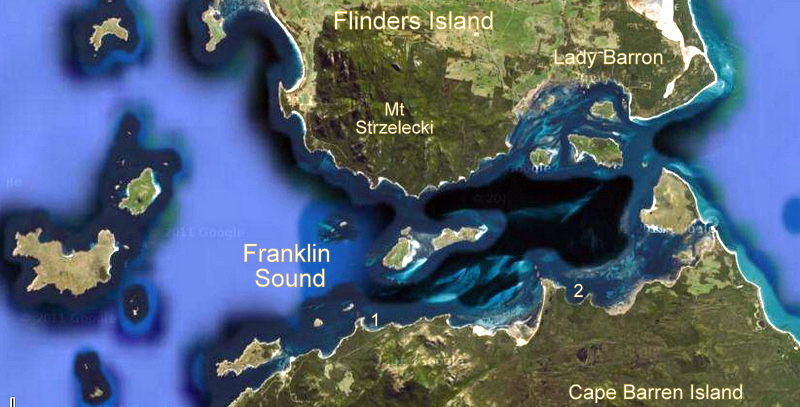 Franklin Sound
Separates Cape Barren from Flinders Island and provides access to the port of Lady Barron with the only facilities available for vessels.
Numerous sand banks and small islands obstruct the sound and the tidal stream runs at 2 to 3 knots. Always use tidal stream and avoid wind against tide that can raise a nasty head sea. 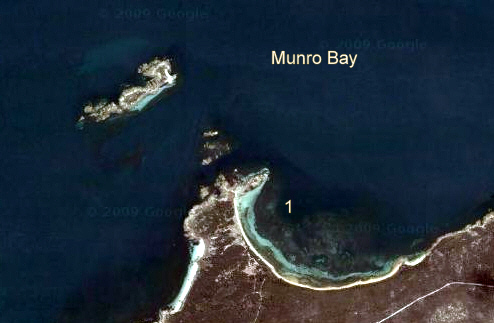 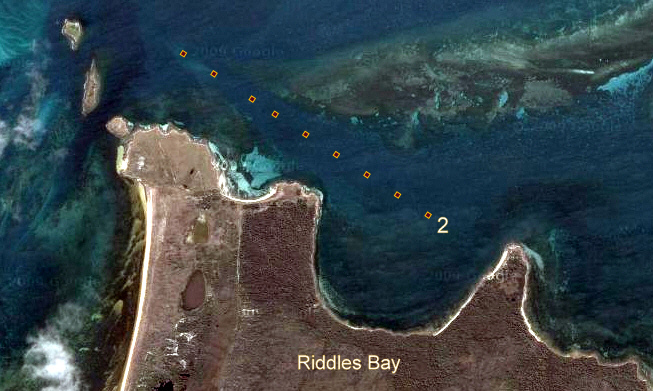 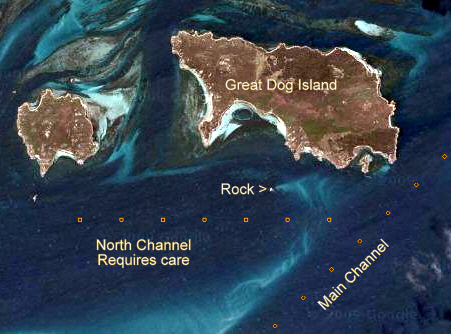 Lady Barron Port,
40°12.87’S ~ 148°14.70’E
Facilities: Fuel and fresh water on wharf, a public telephone at general store with post office within easy walk. The Furneaux Tavern has accommodation and the best view over the Sound. Good place for a drink
Generally, Lady Barron looked a bit run down, but the people were interesting, helpful, and very friendly. 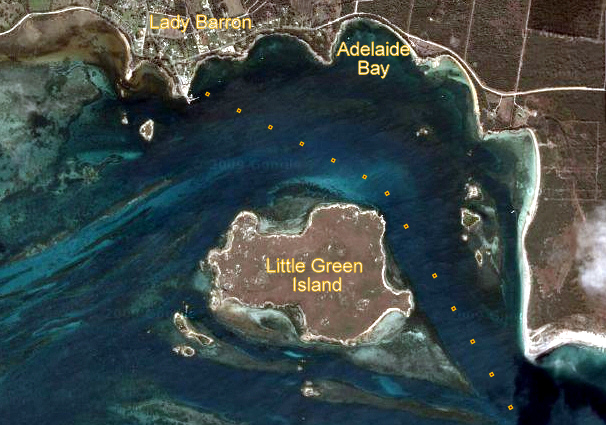 Shelter from all but strong W to SW near wharf or alongside where some swell intrudes. It’s preferable to raft alongside a fishing vessel
Tidal range up to 1.5 m. Possible moorings available for hire.
Banyandah anchored off end of jetty in NE wind, difficult to go alongside. 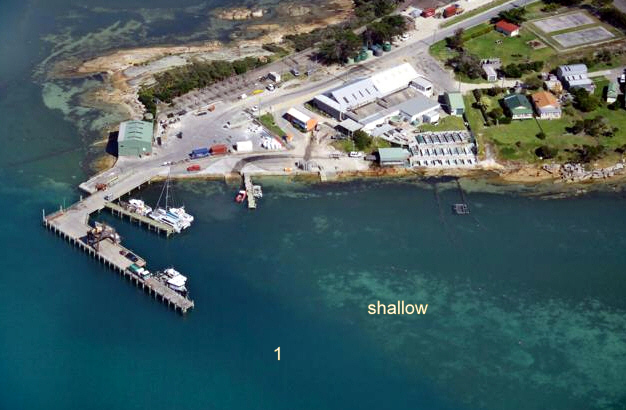 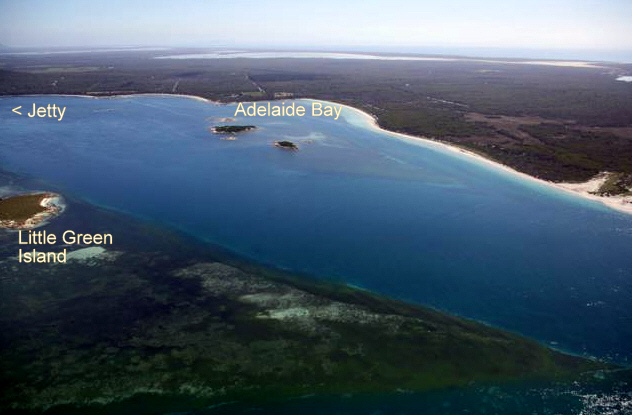 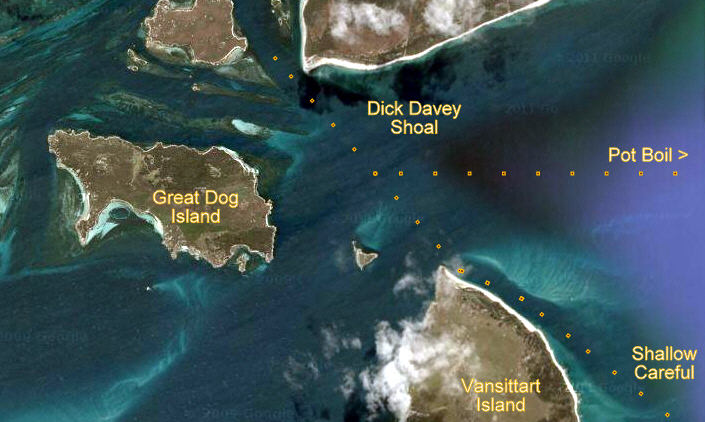 Cape Barren Island
Jamieson Bay, 2 anchorages
40°26.82’S ~ 148°26.23’E
Shelter from W through N to NE in sand 5 m
The fishermen claim the wind is made here, bullets down from Mt Kerford.
Big flathead in isolated bay with beautiful beach. 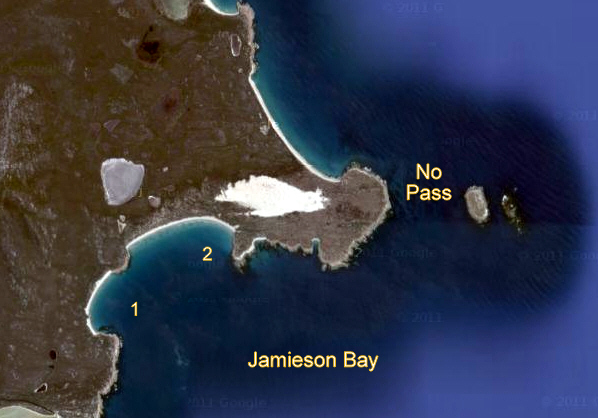 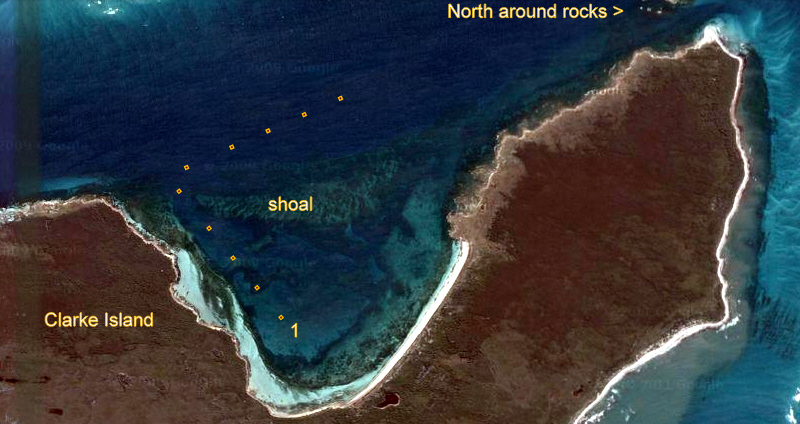 Preservation Island
Historical note: In February 1797, the Sydney Cove on a voyage from India to Sydney with a cargo of Rum was beached on Preservation near Rum Island, Some of crew rowed longboat to near Lakes Entrance and walked to Sydney. Of 17 in party, 3 survived. During subsequent rescue, Matthew Flinders was sent to survey area, sensing a channel existed, he later discovered Bass Strait with the Norfolk. 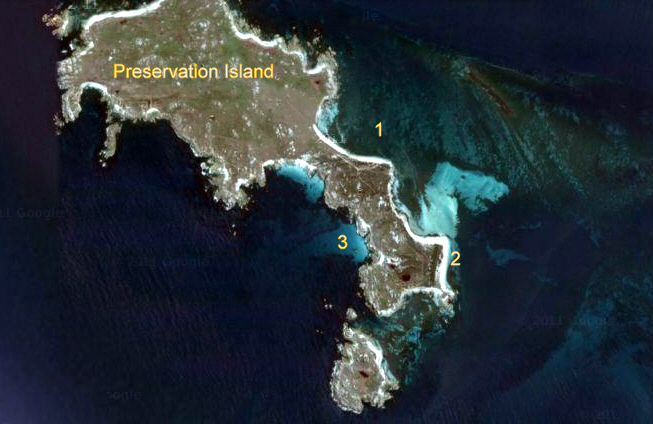