I REMEMBER WALKING BACK FROM THE BEACH late one afternoon, and passing an open hall where a lot of loud noise poured out. Looking in, a crowd of men stood around a man swinging a gavel and I was intrigued by what might be happening. So I cautiously snuck in hoping no one would notice a skinny 10-year-old boy. At the centre of everyone’s attention, a tattered steamer trunk stood upon a table.

“How much for this mystery box,” the ruddy fellow swinging the gavel suddenly yelled out. And the crowd in front of me shuffled about as if in a hurry to see what might come next.

“Do I hear $20 for this antique steamer chest and all it might contain,” the big bloke cried out and winked to his assistant as if they shared an almighty secret.

“C’mon, someone here must feel lucky and want to risk a few dollars. How much for the mystery box?”

The crowd grew more restless, murmurs rose to laughter and the bloke in front of me elbowed his mate. “What say we go lay a bet on the fifth at Belmont?”

Now I had seen boxes like this one in my storybooks and knew lost treasure could be in them. So when the man at the front called for bids, from the back, I blurted out, “A dollar! I’ll give a dollar for that box.”

Heads turned and searched the room. Those around me looked down and emitted a chuckle. One slender old fellow ruffled my hair then called out, “The boy bids a dollar.” And again the room buzzed like a hornet’s nest had been given a kick.

When I brought that trunk home and opened it up, it wasn’t filled with old treasure – no pieces of eight, no gold. In fact, it contained nothing more than a loose roll of smelly stiff cloth, mottled off-white, with a rope sewn around its edge. But then as I pulled it out, I recognised it as a ship’s sail.

But I didn’t know anything about building boats. So I started by looking through all my books, and from what I saw, figured that fibreglass material was the best stuff. With my father’s hammer and some of his nails, a few burlap sacks and a big bag of plaster, I built myself a mould. But it had more ripples than there are swells on the sea. But that didn’t matter. There were more problems to come. Like applying the fibreglass material which proved kind of tricky. More than half ended up on our garage floor. But that didn’t matter either. My pop never barked. He just watched over me with a great big smile. You see, he was just as keen, and knew just as little. 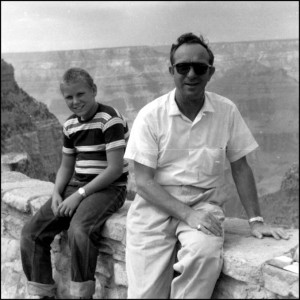 Jackie and his dad at Grand Canyon

Then the big day finally arrived. Father and son took their new boat to the beach where, surrounded by a big crowd, she was launched into the surf. Pity my poor pop, he couldn’t swim a stroke, yet he stood up to his neck in the frothy stuff pushing his son and his lop-sided boat out to sea. A bit of a shame, it didn’t stay afloat.

If there’s one thing good about failure, it’s that we learn what doesn’t work. You see, from that first big failure I realised I had never known why some things float. I didn’t understand displacement. So, from that failure I read more and learned heaps.

My next boating failure fell just short of outright success. On her launching, this new vessel not only stayed afloat, she took off like a rocket across the ocean. That was, until she crashed into her first wave. I had wanted speed so had built her like a giant surfboard three times my own length. So when my new craft dipped her nose like a dolphin, she went underwater. Awash, she came to a halt. Then with a pop, she broke free to sail stop-start again and again.

Years quickly passed while I grew into a man trying and failing at many other things. Nevertheless, life was good. I found a loving wife and we had two healthy sons. And from all those years of trying and failing, I had learnt one important thing. That, if I kept plugging away and not quit, I’d mostly win. Then one day, this bit of knowledge gave me the confidence to attempt building a proper, ocean going sailing ship. 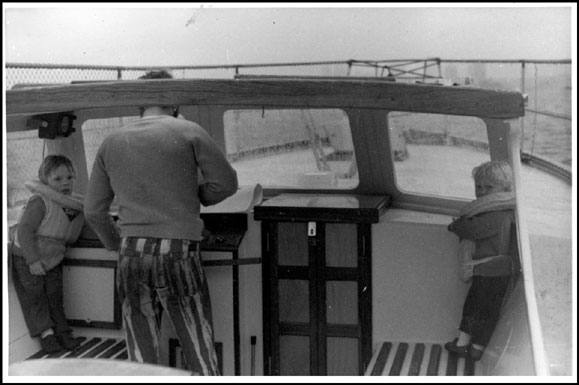 First motor, the day we launched

Well, it wasn’t easy, and took a lot longer than planned, and yes, on the way, my lady and I failed at many new things. But we never gave up. After three years of really hard work, on a lovely midwinter day we launched our classy new craft, and for a change everything went right. Banyandah took to the water like an elegant swan. Trouble was, straightaway we had to face a whole new wave of challenges we knew nothing about. You see, we’d never really learned how to sail.

Now, I’m not as young or as wild as that any more. A gracious God and a whole bunch of good luck have given me a good life. Aboard our ship with my wife and sons, we travelled the world, eventually crossing just about every ocean. On the way, we visited those Egyptian pyramids, we watched volcanoes erupt and saw Africa’s wild creatures. But I have failed, and failed so many times I have learned a lot about what doesn’t work. And that has made life a whole bunch easier.

Looking back over our life’s experiences and the pain we endured to achieve our goals, I say this to the young: Give everything a go. By trying, you will learn, and gain an experience. By not trying, life passes quickly. Don’t be a quitter. You never know, the next time you try might bring success.

These thoughts roamed through my head when back in our house watching the Richmond River taking rains from the ranges back to the sea. Our grandchildren were still quite young and madly running along their course of life. But Jude, my loving wife of forty-one years, and I weren’t getting any younger.

Our circumnavigation of Australia after sixteen years of living on the land was a past event recorded in our logbooks. We had edited our video tapes into a DVD, written our first book, and now wondered what lay ahead. Thinking back over our recent achievements brought into focus the few things we had failed to achieve while going around the great island continent of Australia. We regretted not reaching the peak of Tasmania’s Mount Sorell and we never witnessed Black Man’s Houses on Flinders Island, the site of one of Australia’s greatest tragedies.

In plain sight just outside our front window, Banyandah stood ready to take us anywhere we command. We only needed a plan. Jude and I always function best with a destination fixed in our heads. But with so many choices, sometimes we can’t decide and just take off to find one as we drift towards a first destination. We definitely wanted to go somewhere and be afloat while we still could. So we seized on the idea of sailing south down the New South Wales coast, something we hadn’t done for many years. Probably nothing too exciting there. But we could then revisit Tasmania and get into those exciting things we missed. Who knows, after that, we might continue right around Australia again, this time clockwise, picking up all the things overlooked the first time.