Excerpt from Where Wild Winds Blow

OUR SAIL FROM PORT STEPHENS TO EDEN was nothing short of fantastic with a glorious fair breeze and heaps of current assisting us down the coast. Banyandah screamed past Sydney first seen glowing like a far away fire. And with the morning star still bright, we spied the high rises at Sydney Cove then made fast miles for the next day and night. Even caught fish whenever we put the lure in the water.

A beautiful passage continued right till getting into port just as the predicted adverse change of weather struck. And although it then did blow strongly from the South Pole, we hunkered down across the bay from Eden in Boydtown, just off the historical Sea Horse Homestead that is now an inn.

Boydtown, 506 km south of Sydney, on the southern shore of Twofold Bay is a ghost town today. Little came of the grandiose plans of Mr Benjamin Boyd, the town’s founder, and little remains at the site. 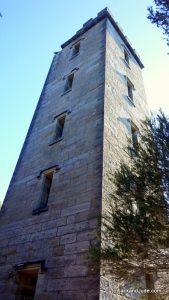 Benjamin Boyd was a London stockbroker who left Plymouth in his schooner Wanderer and arrived in Port Jackson on 18 July 1842, ready to enhance his fortune after first persuading many British investors to financially participate in his schemes. Once arrived, he first established a coastal steamship service, and to control his investments Boyd floated the Royal Bank of Australia, with a nominal capital of one million pounds. He quickly purchased and put into service the Seahorse paddle steamer, which covered the southern route from Sydney to Hobart via Twofold Bay. Within two years of his arrival, Boyd had become one of the largest landholders in the colony with nearly two and a half million acres in the Riverina and Monaro that carried 158,000 sheep and 21,000 cattle. Deciding that Twofold Bay would serve as the port for his enterprises, grandiose plans were made for the establishment of a township and construction of Boydtown commenced in 1843.

The extensive expenditures required in establishing Boydtown soon began to weigh heavily against Boyd’s assets. And in 1849, when he had overreached his investments, liquidators were called in. To make matters worse, the Seahorse had been irreparably damaged after striking a rock. All operations at Twofold Bay ceased, with most of the construction still incomplete. 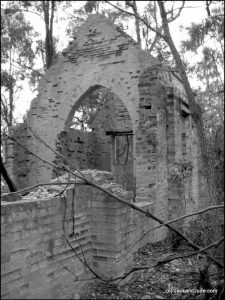 With the Seahorse paddle steamer wrecked, the principal relic of Boyd’s adventures is the Sea Horse Inn. Symbolic of Boydtown itself, the original homestead was built by convict labour and never fully completed. Full transformation to a public Inn, with original detail such as hand-carved doors, stained-glass ornamentation, winding staircases, and large open grate fires occurred in the 1980s.After his spectacular failure, Boyd decided to try his luck on the Californian goldfields and late in October just seven years after his arrival, the Wanderer sailed from Australia. In America, he was unsuccessful at the diggings, and according to John Webster, his sailing companion, Boyd decided to cruise the Pacific Islands with the idea of establishing a Papuan Republic. In October of 1851, the Wanderer reached the island of Guadalcanal in the Solomon Islands, and early one morning Boyd went ashore with a native to shoot game. Two shots were heard. When Boyd failed to return, his companion searched, but his body was never found, and it was concluded that he had been killed and possible eaten by cannibals.

The completed Sea Horse Inn with its ambience of old world charm stood before us in full view as the wind increased towards late afternoon, our bay filling up. One lone sailor working hard, laboriously beat his way in, dropped sail, anchored, then immediately went below. We didn’t see him for two days. Meanwhile, scudding clouds gave way to blue skies and sunshine. So Jude and I took several long walks, one to investigate the ruins of the church partially completed during the Boyd era. 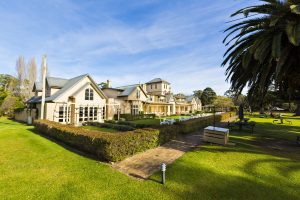 A northerly arriving earlier than expected spurred us into action. Flinders Island lay only 200 miles away and if the forecast held, the wind just might last the journey. I hurried Jude into finishing the repair of our red trimmed furling headsail, and then, in increasing wind we had a struggle to get it back onto the furler without repeatedly getting whacked in the face. Our lone sailor was also getting underway, and we thought we might have company going down the coast. He raised a headsail, but instead of heading out, Carrion drifted down to us, and this scraggy bearded fellow hailed us.

Now most sailors are super social, so when Jude suggested a fresh brew of coffee, the old salt dropped sail again and we’re quickly catching his line and pulling his engine-less craft up behind Banyandah. It seems David had just arrived from Tasmania after being in the Apple Isle a few years. Battling headwinds most of the way, he’d had a horror ride, taking more than five days from Hobart. But with a wide satisfied smile, he informed us, “I’m just one port away from my home in Bateman’s Bay.”

Sharing a coffee and heaps of information, all too soon we were hauling our dinghy aboard, getting ready to sail as Dave shouted some parting words of advice. “Don’t forget Lake’s Entrance, they’ve dredged the entrance.”

“Don’t think so,” I yelled back. “We’re going straight through with this wind.”

Well, the run down the coast got better and better. The gods stayed by our side and helped get us good lifts, as first Green Cape then Gabo Island whizzed by. Come dark, we were entering Bass Strait with still heaps of wind up our backside. In fact, so much wind we were rolling along, robbing Jude, and then me, of a chance to sleep. Small sacrifice if we made the north end of Flinders.

But, a few hours after I hit the bed, the devil stepped in. Sucking in big breaths, that nemesis swallowed the wind. And by 3 a.m. we were dead in the water, rolling madly about. Ugh!!

Available in Print and Electronic Format