We cannot change the past, but the future is within our reach. 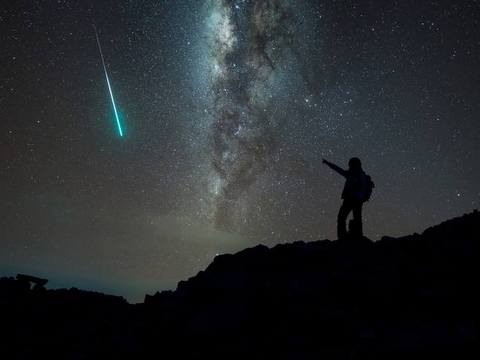 When you last saw a shooting star, did you make a wish? Or wonder what it’s like to zoom towards Earth at a zillion miles a second? Well, it’s something like that around here right now! A new adventure is underway. A new book planned. And our website continues to reflect these wondrous events. And like a new bub, it’s alive and chucking out surprises.

Our first surprise was a pleasant one, finding our veteran sailing craft sitting perfectly on her waterline after a Tasmanian winter, and inside, all smelling sweet and untainted. Even better was finding our main battery bank of three truck batteries fully charged and crackling with energy. We’d left them connected to the solar panels instead of isolating each battery.

After that pleasant discovery began the heavy work of removing the equipment we’d stored below – like our six-man life raft, 5 HP outboard, and sails. Late that first evening, and weary from our travels, we started the long process of storing the fifty kilos of clothes and equipment brought with us.

Then the heavens gifted us rain the next few days, perfect for settling in and getting Banyandah’s systems operational. After sorting below decks, Jude and I re-reeved every bit of running rigging that we’d stored to extend their life. Then on day four, we awoke to a windless dawn, perfect to re-installed our furling headsail, also stored to preserve it. Followed by end for ending our anchor chain to spread the wear. During this time, Jude marshalled her stores, rotating up what needs using first while updating her Excel stores list. Meanwhile, I remounted our navigational instruments and finding them working fine, I got down to tinkering with my beloved six-cylinder Perkins. Changing the oil filter, giving the machinery a good oiling and greasing the pumps brought us to the big moment. Hooray! What a relief. First piston up on that iconic engine saw her fire and away she roared, her deep-throated rumble sounding reassuring. 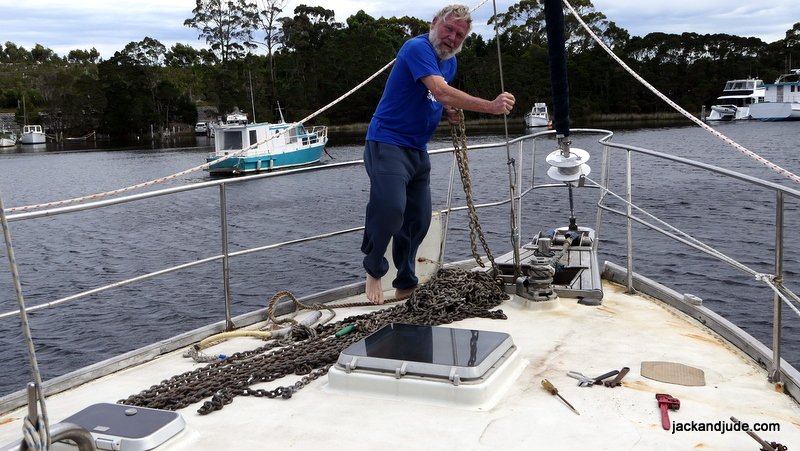 Let’s Go Sailing ~
When the rain began to drift eastward, we came home with fresh supplies from the local IGA. Once stored, we raised sail to take a sweet north wind down harbour. To be afloat and sailing brought the smile of freedom, again and again as the miles whizzed past. Our fast speeds telling us we still had a clean bottom. Late that afternoon, Banyandah entered the Gordon River after a rather speedy twenty miles sailing wing and wing. That first night, isolated from all of humanity and surrounded by forest-clad mountains, we slept as if drifting in heaven. 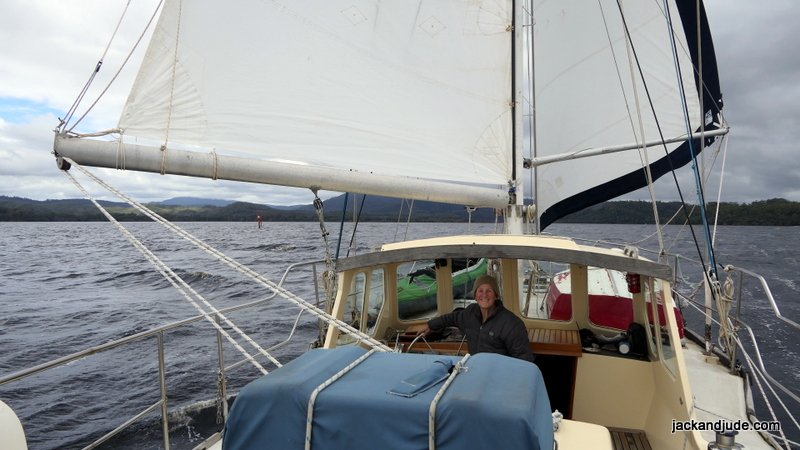 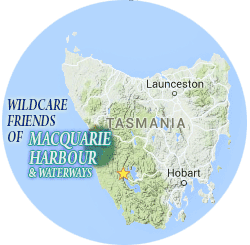 Our Macquarie Harbour Wildcare Group looks after the track that connects the Gordon River to the Franklin via the Elliot Range. Originally cut in 1842 to transport Governor Sir John Franklin and his Lady Jane through some of the Southwest’s thickest rainforest. Beautiful to see, but easy to lose one’s way. Every year, our group attempts to clear winter tree-fall and re-tag the track, but busy schedules and a lack of volunteers have seen it left for two years. So we were apprehensive about what we’d find.

To gain access to the track, one must first cross Eagle Creek’s dark deep cold water, on a slippery fallen tree with only a hand-rope balustrade for safety. Our Wildcare group has a grant application in for an alloy walkway to replace it. Wish us luck getting that.

From Eagle Creek, the next day we motored the remaining 12 miles to Sir John Falls, the furthest a vessel our size can reach. Two other yachts were tied alongside Warners Landing, the jetty established by Hydro when they were investigating a second dam across the Gordon just downstream from its confluence with the Franklin. Perfect, we took the jetty next to the falls knowing Stormbreaker was not due for two days.

Gould’s Track ~
The very next morning brought blue skies and sunshine, so Jude and I headed towards Gould’s Landing, a hundred meters upstream. Gould’s Landing was the terminal for the little known, but very important track cut in 1862 by members of the Charles Gould team of geologists. That track became the mainstay for entering the west and brought men and supplies to the then little known west coast so they could search for much needed mineral wealth. Its hundreds of kilometres of open cleared track provided the safest passage for thousands seeking jobs and wealth on the west coast of Tasmania.

In the early 1900s, the Piners also used this established route to carry supplies and horses to their camps further upstream and in the 1960s the Hydro-Electric Commission (HEC) used it when surveying for the Gordon below Franklin Dam. All of this ended in 1983.

Blockade ~
The Hydro-Electric Commission had begun building infrastructure for a second dam when, in mid-December 1982, six thousand Australians blockaded the HEC site at Sir John Falls. Over the next three months, there were 1,272 arrests. Following the ALP’s federal election win on 5 March 1983, the new parliament passed legislation to protect Tasmania’s south-west. The blockade earned the most conspicuous place in the folklore of Australian environmentalism, and soon after that, Parks closed the area. 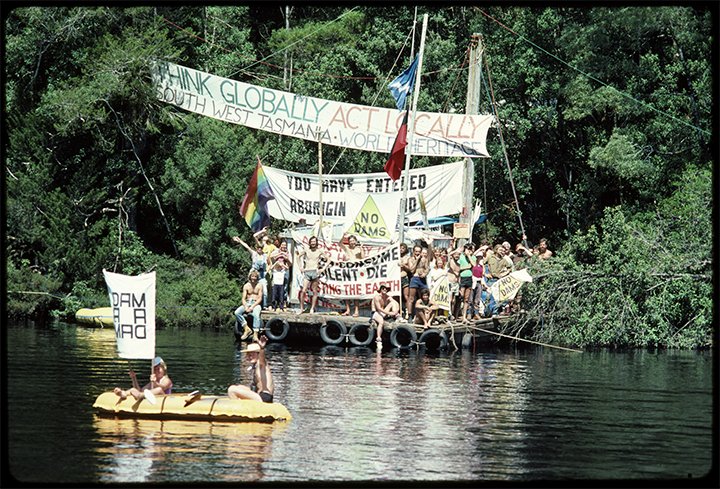 From 1983 until 2015
Nature took back what had been a ribbon of access to one of the world’s most exquisite forests. Originally a cart-width across, hardly a blip to the natural world, lost to adventurers, nature lovers, school children and folk like Jack and Jude who love Earth more than all else.

The story of our years pushing through snarls of bauera, bruising shins on horizontal, cutting hands and arms on razor grass, reaped its reward two years ago when we connected all of our GPS dots to the Morrison Camp, near the Rocky Sprent. We had found and tagged nearly twenty kilometres of the historic Gould’s Track.

On large screens – press play, then use the sprocket for 720P & expand to full screen

Holiday ~
Having cleared the fallen limbs and re-tagged where necessary, we sallied back downstream, happy that our ship and ourselves were in fine shape. It was time to communicate with our family again.

After a few lazy days spent admiring the isolated splendor, we found ourselves in spacious Betsys Bay, with the call of the west coast just over the rising hill in front of us. Amazingly, the sunshine continued. So we planned a hike across the four kilometre wide finger of bushland to the wild west coast. 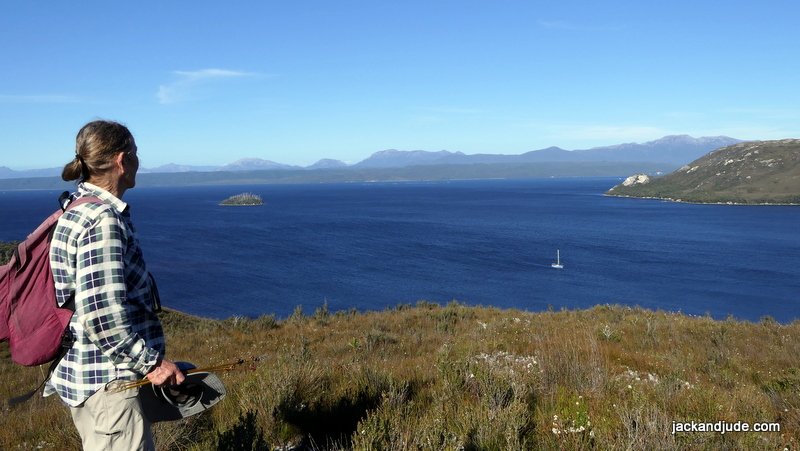 Sloop Rocks West Coast ~
Imagine a coastline without a hint of humanity. As created. Blue ocean waves, brilliant buff sands, outrageous rock formations, and an unlimited horizon that invites dreaming of the faraway. 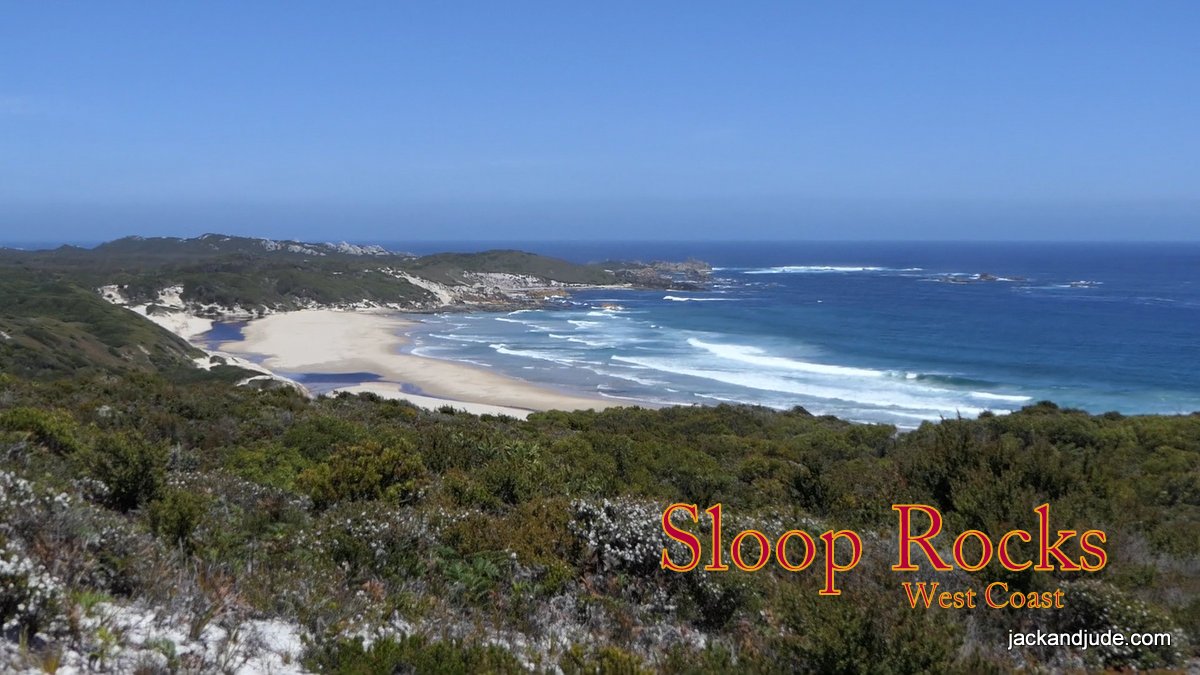 We cleared intruding branches from the Betsy Bay track and renewed lost tags so that those following us will not get lost going to this most inspiring vista, where energy can be felt entering our spirits. The worry and concerns of human life evaporate into the blue never-never, always asking, is humanity missing the point of life?

Just the two of us, after our three hours of toil along the track, we took rock seats to satisfy our hunger and discovered to our dismay a dead bloated whale. Its fixed grin of death shocked our sensibilities. What an enormous creature! Now inert, life lost, we felt pity. Why? Where? Then we remembered the massive pod of pilot whales that were lured into Macquarie Harbour and had stranded on its shoals. Four hundred and twenty of nature’s finest creatures lost their lives in that terrible incident. And here was one, probably one towed from the harbour after dying on its shores.

Minutes later, and only metres down the beach, we discovered another bloated dead creature. Then another, and another. Along that short beach lay eleven of these magnificent, unfortunate creatures with smiling grins of death.

On large screens – press play, then use the sprocket for 720P & expand to full screen

Isolated from all humanity, no internet, no phone, only the roar of surf and squealing of seabirds on the crisp, salty aroma of faraway. There we encountered a most amazing sight. Not the whales. But, beyond them was a sandhill twinkling as if diamonds lay scattered upon it, sparking a memory of Stephens Beach in Port Davey. The Needwonnee midden. With that, we saw that a clan of Toogee had lived there in a quiet corner of heaven. The blue ocean before them, bones of beasts like seals and whales scattered amongst a potpourri of seashells recorded decades, maybe centuries of life.

With racing hearts, we worked along the side of the sandhill until breasting its summit, where we came upon the most amazing sight of three freshwater lakes of the darkest blue. Amazement set our heads rocking back and forth. We could imagine our ancestors living in harmony. Turning about, the blue sea spread to a sharp horizon ignited in sunlight, down a sand slope carpeted with long-ago feasts. What a most perfect place to raise a family. And thinking that, images of what life there could have been created a celebration of life.

Our Newest Addition ~
Not a new bub, but just as pretty is our toothbrush holder fashioned from the root of an ancient Huon Pine. 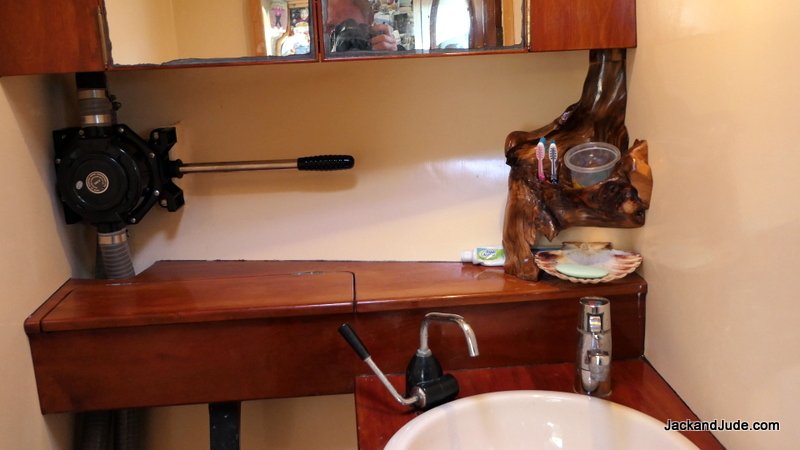 Jack and Jude live fortunate lives. We keep it simple and work hard. We are frugal; we have to be. We make what we can and learn how to create what we need. Time is precious. We waste little—even when drifting across the seas when there’s a freedom few know invites our imaginations to run wild.

Want to live like that? Better get organised. Be prepared to work for yourself. Be brave. Be daring. And bold. Take command of your life. Take care of your body. It contains the strength and spirit. You won’t do this when you’re feeble.

Now that we have a proven ship, our spirits lust for freedom, and we’re sailing for King Island on the next weather window. Covid will dictate our course from there.

During the next few days, under glorious windless warm sunshine, we’ll be paddling up the King River to camp under a star filled heaven.

Here is the Photo Album

Till next time, Fair winds and be safe, J&J