A Sea of Beauty

We first took our sons to explore the Coral Coast and Great Barrier Reef in the 1970s, when we were often the only vessel in an anchorage, and catching a fish dinner was so easy, we simply jumped over the side to pick which one.

But now, we no longer visit what was once one of the world’s seven natural wonders. Covid and the rent a boat fleet have made the Coral Coast overcrowded, and the once great fishing has succumbed to professional fishermen grabbing too many fish for our expanding population, and coral bleaching has erased the brilliant display of colour underwater. Instead, we prefer the Coral Sea islets that still offer solitude, great diving, and good fishing in safe trade wind anchorages. 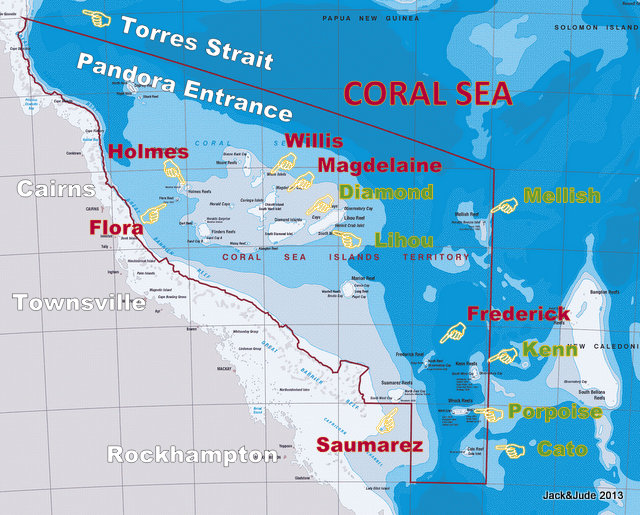 WRECK REEFS / PORPOISE REEF
A favourite route of ours takes in historical Porpoise Cay in the Wreck Reefs, where in 1803, HMS Cato and Porpoise ran aground while carrying Matthew Flinders home with all his newly made charts and specimens. There’s a pretty good anchorage on its northern side that lets you dive the windward lagoon and wreck site, and maybe spot a cannonball dropped when the ships jettisoned ballast.

You can also explore Porpoise Cay, 275 m long, 90 m wide and 3 m high, vegetated with low grass and a succulent similar to Pig’s Face without the pink flowers. When last visited, White Masked Boobies were courting and nesting on its sandy fringe while brown Common Noddies nested within the foliage. About 20 pairs of Brown Boobies watched us from the half tide rock on the windward edge. Pieces of black coal along the flotsam line lay amongst humanity’s bits of plastic, and embedded in the congealed half tide rock were bits of metal rusting away. The coal and metal likely from the wrecks. 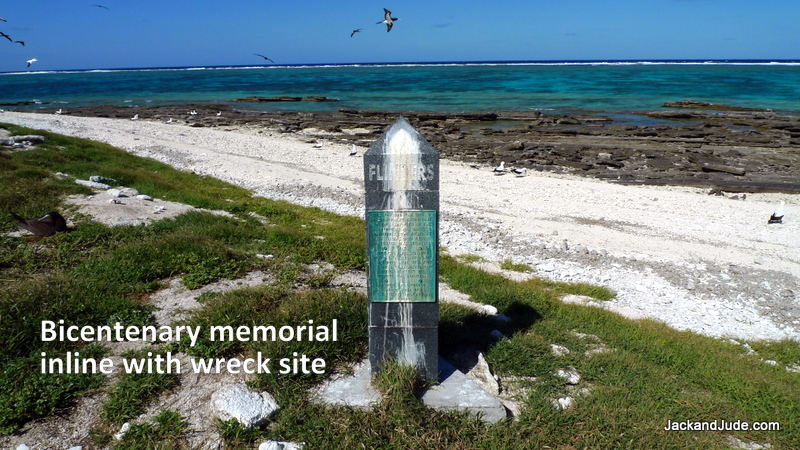 KENN REEF
Located 270 nm from the Australian mainland, Kenn Reef covers an area of approximately 40 km² – shaped like a boot 8 nm long and 4 nm along its southern edge. The southern reef is the largest with three emergent sand cays on the SW part. The only permanent land, tiny Observatory Cay, about l00 m by 50 m and 2 m high has no vegetation.

We found excellent anchorage for all winds except northerlies with easy access to these cays from an extensive shallow patch over the purest white sand. But getting to this anchorage requires careful visual navigation to avoid several coral heads before passing over a 3 m sand spit. 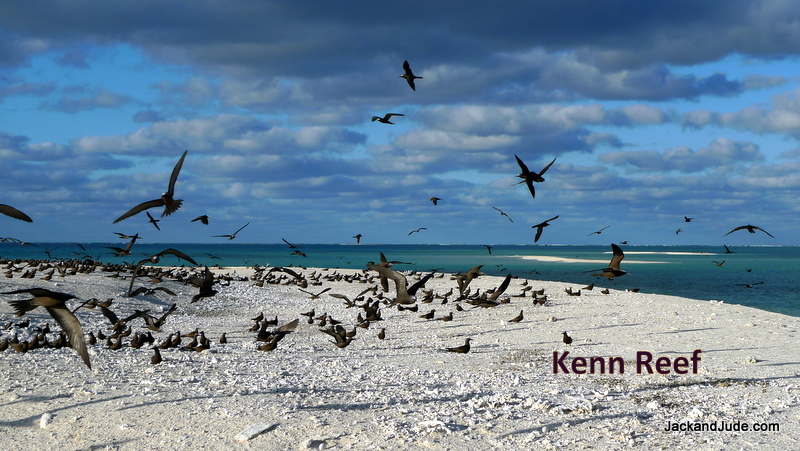 Kenn Reef’s superb mid-ocean lagoon is filled with budding new sand isles.
On the outer reef lies an admiralty anchor from a ship of sail. 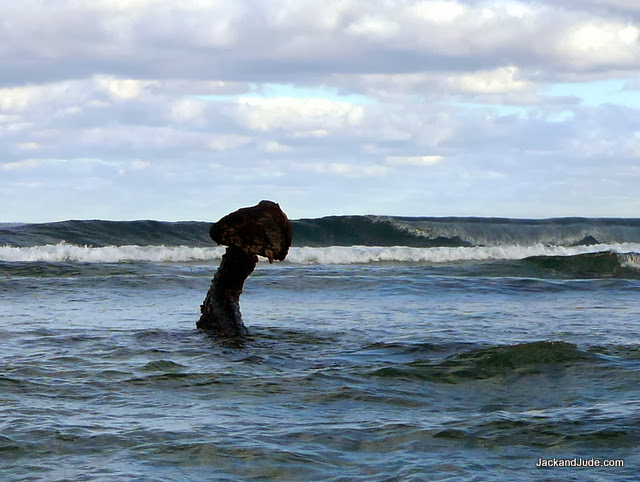 MELLISH REEF
We would then journey to Mellish Reef, Australia’s furthest possession. It may be too far from the coast for most, lying 550 miles from Gladstone. But not for us. That’s because we like extremely remote islets, and have been to Mellish several times before. The first time in 1978!

Mellish has some of the best trade wind anchorages, superb fishing, heaps of wildlife, and good diving. Heralds Beacon, the 100 metre long sand islet, has no trees and little vegetation. But its lagoon is massive, about 20 miles long, with a second smaller sand cay close to its northern end. 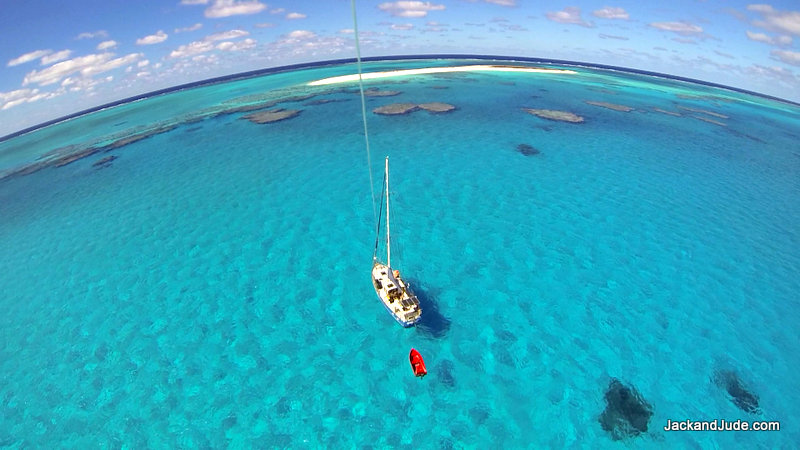 Mellish Reef, the furthest and most isolated coral atoll.
Be prepared if going there. Rescue supplies by AMSA Challenger aircraft. Ship pickup could be 40 hours.

When the breeze faded at the end of our day-sail from Lihou Reef, we motored into a well-protected anchorage bright with white sand. A light structure rose from the cay and everywhere the air was alive with many species of seabirds, featuring the most frigate-birds we’d ever seen. A 2006 report put the numbers at 2,500 Lesser Frigatebirds, a thousand pairs of Red-footed Boobies and very large numbers of Black and Common Noddies, Masked and Brown Boobies, Black-Napped Terns, Sooty Terns, Wedge-tailed Shearwaters, several Red-tailed Tropicbirds and a few Great Frigatebirds. 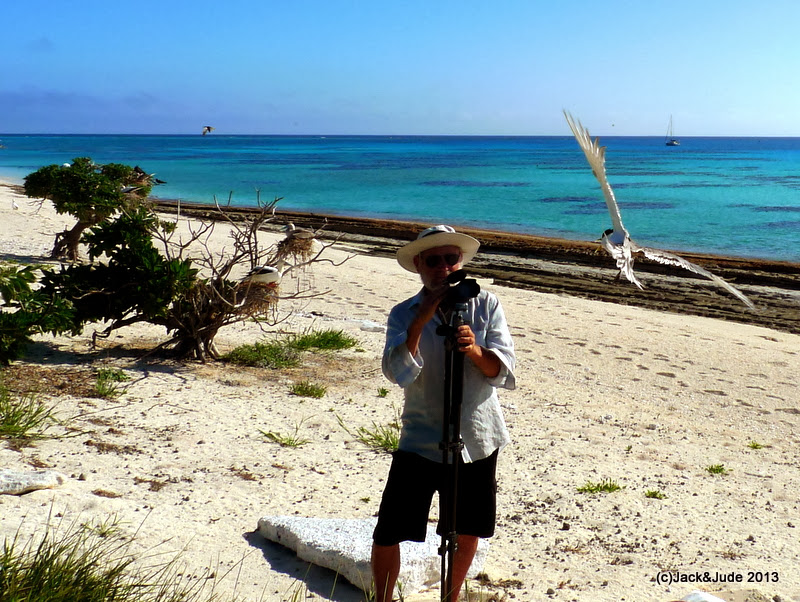 On shore, several species of seabirds were breeding, including the Frigatebirds and Red-footed Boobies, with different specie in the same small tree, so our cameras rolled and clicked for the next five days. We climbed the light structure, and down the cay, we walked our GoPro aloft on the parafoil kite. Jude was in heaven when talking to the creatures while we filmed a documentary explaining the habits and features of each group.

Check out our free web-based Coral Sea Cruising Guide
Or download our premium Digital offline version
Both include anchorage and weather information.

Coral Sea Feature Film
Our mission: To explore Coral Sea reefs and islets, film their exotic beauty and wildlife, and compare from a layperson’s view any changes we perceived from our previous visits out there in the 70s and 80s. Providence smiled upon our venture. We produced a complete report, cruising guide, and feature film of our marvellous adventure.

Coral Sea Adventure ~ In Search of the Duroc from JACKandJUDE