Oh What a Beautiful World ~

Have you noticed how clear the air is now that the world is in lockdown? Far fewer vehicles on the roads and a drastic reduction in air flights have Delhi, Mumbai, Seoul and Wuhan see record-breaking clear skies. But for how long? Here’s the irony. A disease that attacks the lungs and has killed more than 300,000 people might actually be prolonging some lives by reducing air pollution.

We are back in our shack alongside the wide Richmond River where the afternoon sun settles towards the Alstonville Plateau rising from the far riverbank. At the end of the day, it’s a stunning sight that we have enjoyed these past thirty years. But recently, Nature’s display of majestic colours has risen to even greater glory in the sharp, clear autumn air. 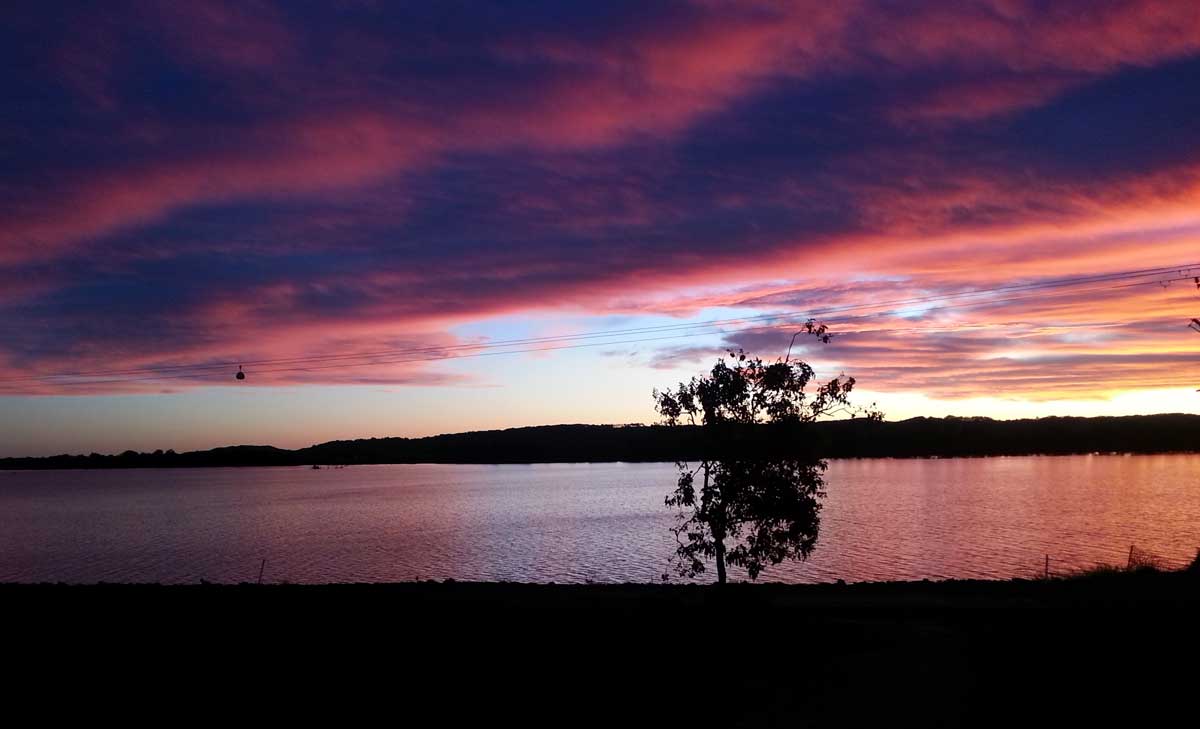 As we gaze upon the magical colours painted across the still waters, Jude and I reflect on the course humanity is taking that defies comprehension on a planet so rich in wonder. For most of our lives, we have been surrounded by Nature’s beauty, power and wisdom. And so we cannot fathom why humanity is racing full pelt towards destroying it. Jack and Jude vote to begin reducing our numbers on the planet gradually over time. That would reduce pollution from fossil fuels and our waste.

House Chores ~
From leaving our property during one of the worst droughts and returning after one of the wettest summers, Nature amazed us by how quickly it recovered. Leaving behind leafless trees, we returned to a massive abundance of leaf litter, fallen branches, and shrubs gone wild. Out came the mini-chainsaw to trim and fall two victims of the drought, and out came the hedger to pare back the woolly-headed monster encircling our vegetable garden, which was jumping out the ground compliments of a friendly neighbour who had planted a wide assortment of greens. A big two-day fire took care of the refuse.

And then we went for a paddle along a secluded stretch of the Evans River. At our age, we just have to keep our bodies working or seize up and whither. A picture-perfect windless day showcased Nature living just a few kilometres away from the M1 Motorway. Jude packed a lunch so we’re not in a hurry when enjoying plenty of isolated stops along the way with a stretch and wander. One day we’ll take the grandkids here for an overnight camp on the banks of the Bunjalung National Park.

Birthday Gathering ~
After tidying up the place it was our grandson’s fifteenth birthday and the clan decided to celebrate it with a full-on BBQ Sunday Breakfast at our place. Jude and I had not seen our protégés in six months. We’d heard their voices in faraway places, but seeing them gave us a pleasant thrill to see how they had grown. The birthday boy, or we will now call him a young man, was nearly my height and spoke with the beginnings of a husky-manly voice. 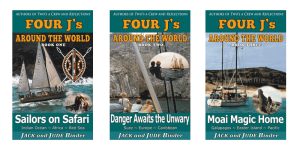 Note: The complete trilogy is now available for download:
Sailors on Safari + Danger Awaits the Unwary + Moai Magic Home.
On Amazon – Look inside and/or download a sample 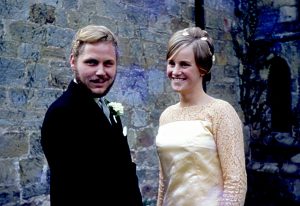 Reflections ~
In many ways living through this pandemic is similar to a life-threatening event Jack and Jude survived when just newly wedded kids looking for a place to live our lives. Roll back the years to Africa in the mid-sixties, when the Simba Rebellion in the Democratic Republic of the Congo took place within the wider context of the Congo Crisis and the Cold War between the West and Soviet Union. Just over fifty years ago, Stanleyville was the scene of one of the most savage crimes of the last century, the cold-blooded massacre of hostages by the Simba rebels.

There were nearly 300 white hostages imprisoned in the Victoria Hotel when the sun rose over Stanleyville, now Kisangani, on 24 November 1964. A few hours later, seconds before their rescuers arrived, many lay dead, brutally hacked to death or shot by their rebel captors. Others, the lucky ones, would thank God that they had survived the premeditated and cold-blooded slaughter.

By November a year later, mercenaries led by Lt Colonel Mike Hoare had effectively suppressed the Big Lion rebellion. However, holdouts of the rebels continued their insurgency until the 1990s.

When Jude and I passed through this area in our beat-up V.W. van in 1969, like the Coronavirus pandemic danger lay hidden from view. An attack could be waiting behind thick Congo jungle, or at the many roadblocks manned by men toting machine guns, while we suffered a total lack of communications as well as support. Years of conflict had driven out the European business managers, and without capital, there was neither food nor fuel available. Like today, we lived each day under immense stress and survived by taking total control of our safety and movements. 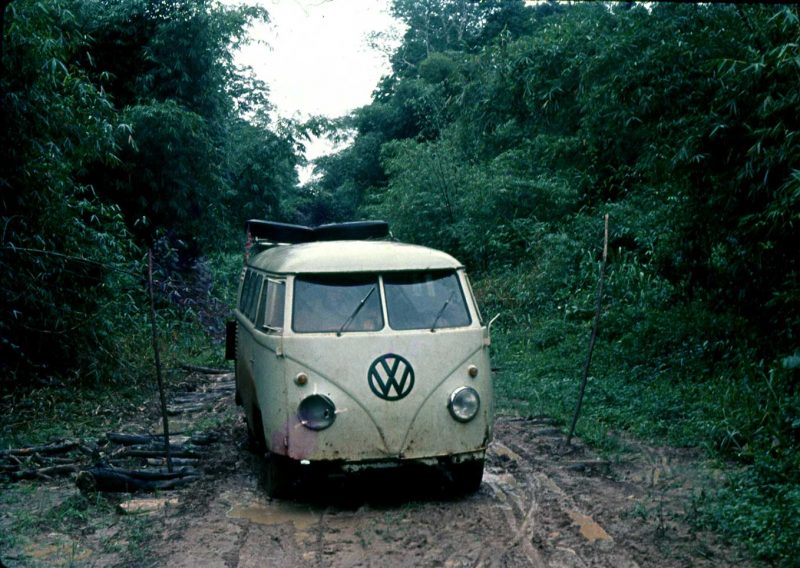 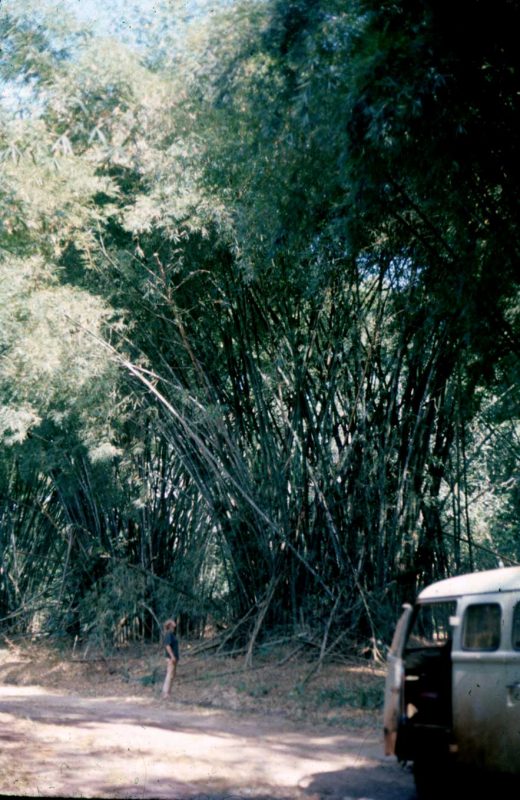 Picture a dense jungle bisected by a narrow muddy track dotted with pools and deep divots created when heavy trucks became bogged. Along the edge of this wilderness, bamboo forests flourished as if towering rocket launchers. From these, markers had been cut and placed so vehicles wouldn’t fall into the quagmire, and they guided the few brave enough to cross the sapling corduroy found in the Congo’s sparsely populated northeast region. The sapling corduroy was tricky for us to traverse, our van slipping and sliding as the platforms unbalanced with its weight. After nearly coming to grief on the first few, we learned to put on full power to get across as quickly as we could. Bridge crossings over streams and gullies were even more dangerous. They were crossed atop tree trunks laid together, and sometimes a log had collapsed leaving a gap, forcing us to choose carefully which logs to put our wheels on.

Halfway across the Stanleyville region, the V.W.’s front suspension collapsed, forcing us to cut holes into the cabin to allow the tyres to come up, meaning mud was also slung inside, splattering us and our windscreen. The wet sludge eventually shorting out the windscreen wipers.

Although we had few provisions, we dared not stop at villages after gaining more solid ground. But, after passing a village, a dozen scrawny chickens ran from thick vegetation and scurried directly in front of our van. Desperately short of food, basic instinct took control. I pushed the pedal to the metal, hot in pursuit, hitting one bird square on the van’s V.W. round insignia. Catapulted high into the air, the hapless creature hit a tree, and I slammed on the brakes to stop near where the dead bird fell, and Jude jumped out and ran back to get it. As she grabbed the bird, angry villagers streamed out the jungle, and she ran for her life, while I revved up our old battered machine to flee from the mob. Taken from Reflections in a Sailor’s Eyes

Books Revised ~
In these stressful times isolated from regular contact, we have taken advantage of our extra time to revise our earlier publications to improve both the content and images. Our first book, Two’s a Crew was published ten years ago, and in that time we’ve become better wordsmiths and more professional publishers. So, we have updated and expanded our earlier books, releasing new editions of Two’s a Crew, Where Wild Winds Blow, Reflections in a Sailor’s Eyes, and Jude’s Practical Boat Bits and Tips.

Upon request, the authors can sign these books – Available only to AUSTRALIAN ADDRESSES.

Halcyon Days
and
The Myth Of Halcyon And Ceyx

Jack and Jude love Greek mythology, and the myth of Halcyon is a tender story of love and commitment, which explains the Halcyon sunny days of calm seas and winds. The Halcyon days or Alkionides Meres, as Greeks call them, appear in mid-January every year.

Halcyon is a type of kingfisher bird that nests by the sea where sea-calming winds blow so that its eggs are protected during the nesting period. The phrase Halcyon days also signifies prosperity, joy, liberation and, of course, tranquillity.

In Greek mythology, the goddess Halcyon (Alcyone in Greek) was the daughter of Aeolus, the ruler of the winds. Aeolus lived in the caves, where winds were imprisoned. He was the one who chose when to let them out, depending on how the higher gods instructed him.

Halcyon was married to the mortal king Ceyx of Tachis. Once, when Ceyx had to go to Delphi to consult the oracle of Apollo, he chose to sail there despite all the cries of his beloved Halcyon, who was terribly afraid of the sea. 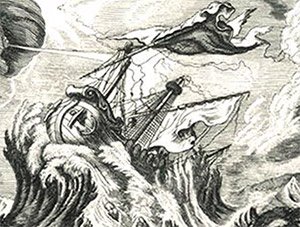 Halcyon proved right because Ceyx drowned when a huge storm took his life not far from the coast and his boat disappeared in the waves.

Morpheus, the God of Dreams, appeared in Halcyon’s dreams and told her about the tragedy. The desperate Halcyon went to the coast where she found Ceyx’s body and threw herself into the dark waves. Amazed by her love and devotion, the gods decided to save her and transformed her into a kingfisher seabird. They also turned Ceyx into another kingfisher so the two could live and be together.

The Myth Of The Halcyon Days 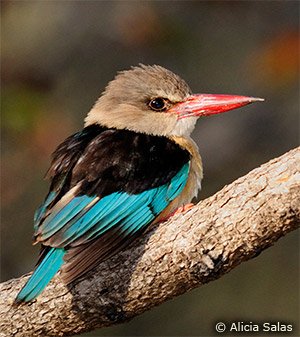 But even in Greek mythology life was not always easy. Zeus ordered that Halcyon would lay her eggs only in winter. Having her nest near the shore, close by the spot where she found the body of Ceyx, the stormy waves kept sweeping away her eggs.

Crying and praying endlessly, Halcyon finally managed to touch Zeus’s heart and he decided to give her fourteen days of calm weather in the middle of winter.

So those two kingfisher birds, or Halcyon birds as they are also known, were able to keep their eggs safe every winter during the period that came seven days before and seven days after the winter solstice. During these days Halcyon’s Father, Aeolus, would keep the winds calm on the sea.

Halcyon days are still celebrated in Greece, in memory of Halcyon and her sacrifice. Practically, Halcyon days appear in mid-January and usually do not last for more than a week or ten days.