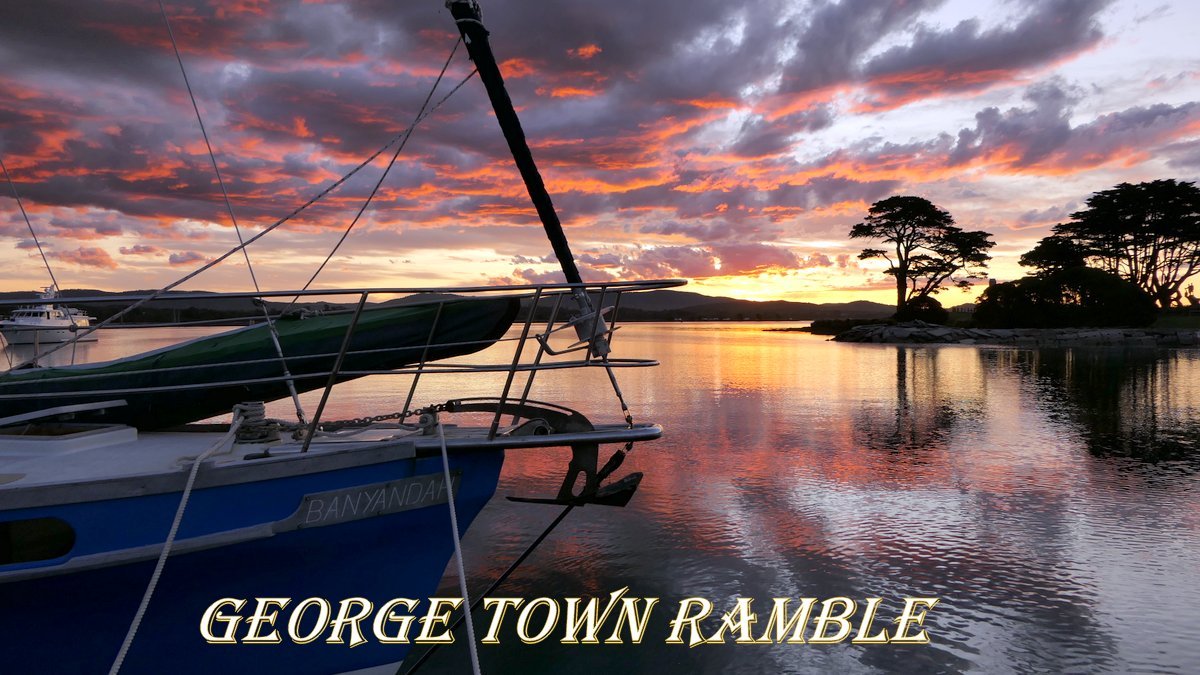 21/Feb/2020 08:16:00 AEDT – 041° 02.335S, 146° 44.899E
A Perfect Passage
Weeks of strong easterlies finally relented and we bolted for open sea with the following SW breeze that had us scampering along across the gap until in the lee of Hunter and Three Hummocks. In calming seas, that lovely breeze kept us flying all night under a clear starry night. No wonder we sail – What magic to be alone with your lover upon such a dream night at sea. Even managed a few hours of sleep. 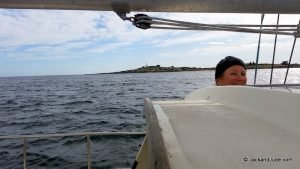 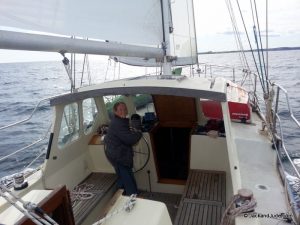 22/Feb/2020 13:15:34 AEDT – 041° 06.592S, 146° 49.163E
Alongside at the friendly George Town Yacht Club
George Town has every facility including a large Woolworths and great library. Anchoring can be a problem due to depth and current from the rather large tides. For short stops to provision, use the town wharf, it’s free. For longer stays try Peppers Marina across the bay, or drop your hook in 15 metres with good scope.
The GTYC pontoon was empty and we gladly paid them for its use. Good folks at the club that we got to know very well in our extended stay here several years ago.
Beauty Point, just up the river 30 minutes usually have berths available, Phone: 0418 321 339 Email: office@tyc.asn.au
or drop your anchor in any of the protected bays for a quiet spell. 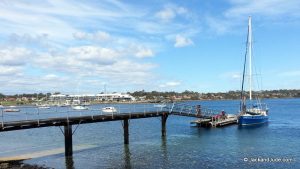 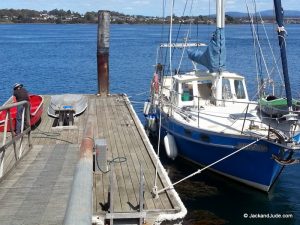 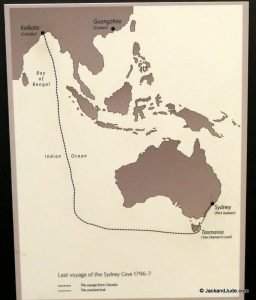 In 2016, Jack and Jude sailed to a little-known Tasmanian location to film the final resting place of a historical vessel few would have known. The ship carried the same name as its destination back when Australia’s first colony was struggling to survive. That scamp of a ship brought much-needed food and goods to help rescue the colony from desperate times. But fate had other plans for the Sydney Cove and eleven Englishmen and forty-four Indian Lascar seamen.

In a compelling tale that leads to the eventual discovery of Bass Strait by Matthew Flinders, who was a member of the rescue mission, and who upon his return reported to Governor Hunter that he believed a passage from the west lay in those waters.

For nearly two centuries that ship lay hidden until nesting mutton birds exposed porcelain artefacts on Preservation Island. This lead to an expedition unearthing the vessel and recovering precious booty from Australia’s earliest days. Today those artefacts are on display at the Queen Victoria Museum in Launceston. After seeing images of this booty from so long ago, Jack and Jude produced a film telling the heroic story of these men stranded in such a faraway place. While doing this, we witnessed firsthand the amazingly beautiful location still filled with wild ferocity. And when reliving the sailors’ lives on that isolated island, we yearned to examine the articles retrieved from the sailing ship Sydney Cove. 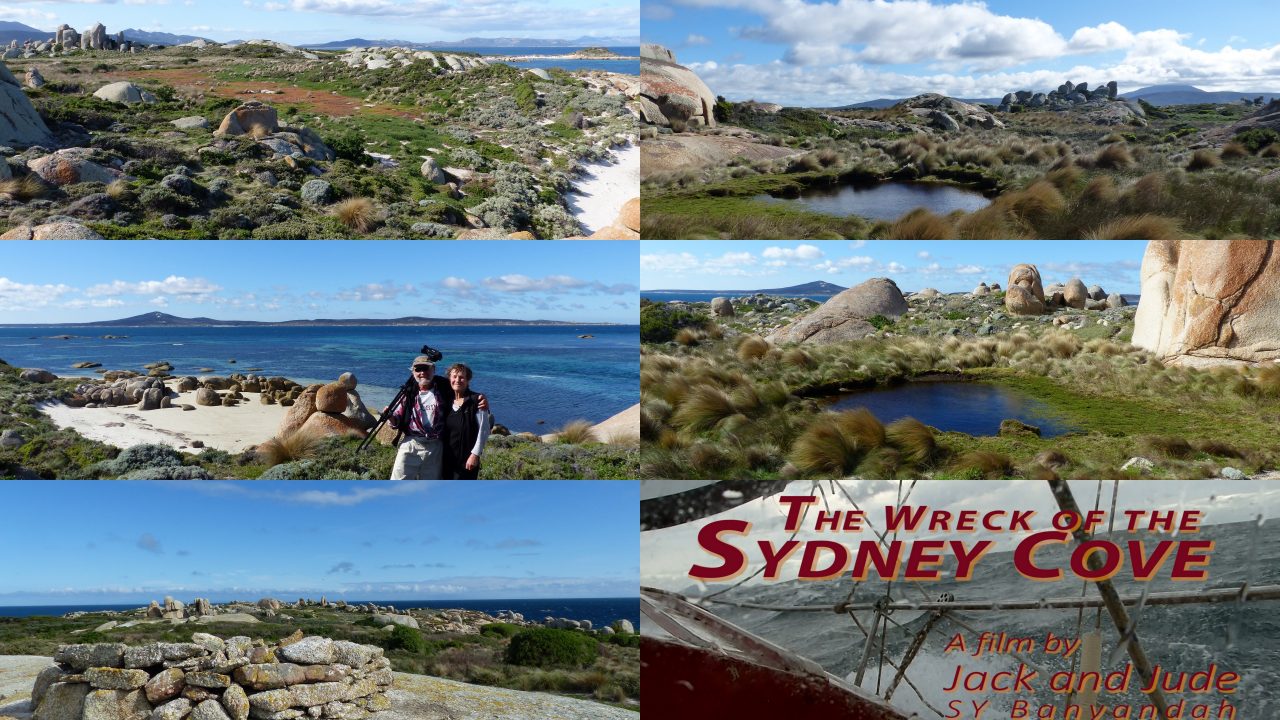 Filming at Preservation Island
The Wreck of the Sydney Cove 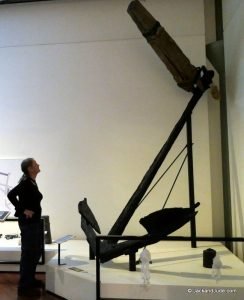 Here in George Town, a day after steady heavy rain, we left our Banyandah securely tied to the pontoon at the yacht club and boarded an early bus for the fifty-kilometre journey to Launceston. Our destination, the Queen Victoria Museum to view the display of artefacts from the wreck of the Sydney Cove. If you’ve watched our film, Summer 16, you would have seen photos given to us by Parks and Wildlife maritime heritage officer Mike Nash, who helped recover many of the artefacts from the wreck. Having seen them on our monitor, a visit to their resting spot seemed high priority while in the area.

All went well until we marched into the museum where we were told the display was temporarily closed for the day for necessary maintenance work. Silly me meant to telephone the day before to confirm availability but got heavily into editing our books for launching on Amazon and, well, time slipped away.

Therefore, at reception suffering a stress attack, I rattled on about the work we had achieved on Preservation Island and the resulting film hoping to get a Get Out of Jail pass – but we didn’t.

Disheartened, Jude and I traipsed around the other displays. We partially enjoyed an illuminating visit to the blacksmith shop associated with the Launceston Railway Yards that once operated from this location. Still feeling unfulfilled, when starting to leave for our next destination, a trip to Bunnings–a burst of good fortune shone down on us well-meaning souls because as we made our way to the self-opening doors, a lass ran up to say that the workmen would finish early, and if we came back after lunch, we’d get a showing.

As a result, we have two cameras brimming with images of stuff we’d seen before on our monitors and came away very impressed with the university’s display and informative write-up. However, regretfully the display lacked details of the survivors’ island. Preservation and Rum are spectacular islands with giant granite tors surrounded by wild beauty. Yet, none of this featured in the displays-just the history and broken shards, and a somewhat rusty anchor and rudder remnants.

I had come prepared for such a situation and asked to see the assistant CEO once again to inform her that we had made two films on Preservation and would she like free copies to include in the display. Not her department, she said, and instead gave me a card with the email address for enquiries on it. Until we hear more on that, watch this short clip of amazing Preservation and Rum Islands.

Maintenance ~
All boat owners have this. The sea extracts a toll from all that floats, and cleanses all that doesn’t. Banyandah in her forty-seventh year of service has withstood the sea’s attack for hundreds of thousands of miles. Amazing really for a homemade yacht. 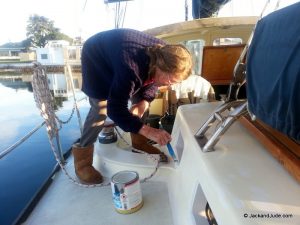 While in George Town, we are repainting her cockpit, dodger, and aft cabin house in the original cream. Around twenty-years ago, we sprayed that with two-pack polyurethane during her rebuild. John, our current neighbour alongside suggested we just need give her a polish, it looked that good. But John doesn’t see the blemishes and wear that we do.

Jude’s the workhorse, or I should call her an artisan she’s such a perfectionist. I don’t mind. We have been a husband and wife team since our first adventure down through Africa in the late sixties. When we made furniture for a living, she did the coatings, making my joinery look first-class. She’ll do the same for this paintwork, and then we’ll be off again into the wild blue yonder for a bit of fun. 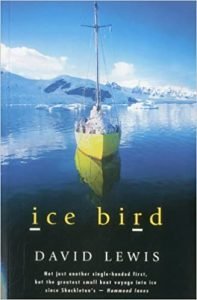 Have you ever heard of Dr David Lewis? When I told a friend of our difficulties at the museum, he told me a fascinating story about Dr Lewis, a good friend of his.

Imagine sailing alone for 14 weeks in freezing temperatures aboard a 32-foot sailboat. Imagine your boat capsizing three times and losing your mast and rigging 3,500 miles from help. And imagine doing all that without modern electronic navigational tools. His survival was a miracle of endurance, skill, and some luck.

Dr Lewis was a courageous sailor, an extra-ordinary navigator and an adventurer with big dreams. He was also the first navigator in modern times to cross the Pacific Ocean without using instruments, following a legendary Maori course from Tahiti to New Zealand.

But my friend told me of his difficulties to get David’s life displayed to encourage our youth to take on challenges and be brave.

Graham Cox said,
I talked to the National Maritime Museum director about my friend, Dr David Lewis, and his Antarctic exploration aboard his sloop, Icebird, which is held in a storage shed by the Powerhouse Museum in Sydney. His film and papers, which should be preserved as they are significant maritime cultural artefacts, are in boxes under his son’s bed and will disappear when his son dies. The National Maritime Museum director had never heard of David and was amazed to discover he had published 12 books about the sea and his voyages. But they claimed they had budgetary restrictions. I sailed away soon after and nothing happened. It might have if I had stayed and turned it into a major campaign.

Environment ~
A brainwave struck in the middle of the night, and I had to get up to do a sketch. The driving force was, if the Macquarie Harbour fish farm workers could visualize the effects of losing plastic ropes into the water, they would take extra care to prevent it from happening. 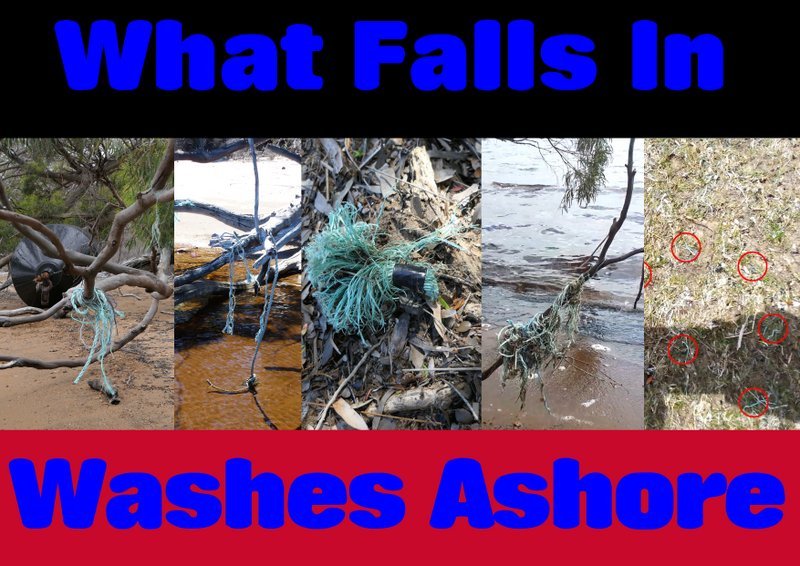 This image printed on A2 pasteboard, could be mounted wherever the workers congregate like their lunchrooms and locker area. If they see how the plastic breaks down into strands and then into micro-fibres, maybe we can stop a lot from going overboard?

Open letter sent to: Mr Mark Asman, Head of Aquaculture, Tassal Salmon Products
G’day Mark,
I am sure you were not pleased to see that we produced another video of the farm trash littering the shores of Macquarie Harbour. It saddened us to see that the plastic ropes are breaking down into strands and filaments that then degrade even faster into micro-plastic.

Against our best efforts to find a solution to this unfortunate situation, and the efforts by your team to reduce it, the truth is that day by day more farm trash finds its way to the shores of Macquarie Harbour.

Attached is an idea we’ve come up with that may encourage your team members to take extra care when handling plastic ropes in their day-to-day operations.

It’s a poster suitable for printing on A2 board, which we thought come be mounted wherever workers meet or relax.