Chapter 44
AROUND THE WORLD IN EVER INCREASING CIRCLES

To the Naval of the World 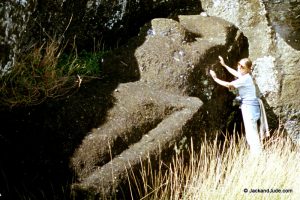 Rapa Nui Teaser ~
When NASA needed a Pacific Ocean tracking station for the Gemini space program, they shipped Orlando home to help build the Easter Island Airport so that NASA could establish a tracking station on his island. Now Orlando owns one of Rapa Nui’s finer hotels. Concluding his story, Orlando called over a young man. Tall with thick black hair, I meet Benjamin, one of his sons, a handsome lad, twenty-three-years old.

“Jack, you will have to move your ship,” Orlando said. “A storm is coming.”
Thinking of my day of worry, I smiled. “I plan to shift as soon as the supplies get on board.”

Silent for a moment, Orlando looked out to sea.
“Why don’t we trade sons for the night, my one for your two? Yours can come home with me, have a shower, and watch television. My son can experience a night at sea.”

How could I refuse such a kind man? I didn’t think the storm would be fierce.
I turned and asked, “Benjamin, do you get seasick?”
His reply, a shake of his jet-black curls, so I said, “Okay, let’s load up. I’ll bring Jason ashore.”

Half an hour later, the transfer complete, I’m swearing and cursing. Our anchor jammed in that confounded Easter Island rock kept Banyandah rolling violently, and Benjamin limp and spewing all over my boat.

When finally away, we streaked across La Perouse Bay with the Three Crosses atop Poike our landmark ahead. Once they were close aboard, we roared past that red wall of gigantic bricks, white surf flying high and the sea running freely across our decks. Quickly again at Tongoriki, the bay at the base of Rano Raraku, but this time much further out for the swell had built and broke in deadly white lines across the entrance to the shallow bay.

In gathering dusk, we anchored deep, letting fathoms of line out, and buoyed our anchor. With no-where else to hide, our existence became a screeching windblown night of worry. Each blast topped the last, sending clouds racing across the full moon, making the night alternate between Stygian blackness and ghoulish light giving glimpses of the dead land, a volcano above a madhouse of white danger. Waves tumbled, making the ocean glow as if drowning sailors danced upon windblown spume in a cacophony of their screeches. As the angry sea thundered past, our anchor rope protested like a creature torn between colossal forces making sleep impossible.

Instead, we worried if our anchor line should break. Regaining land might take days, if ever…
More on Benji [HERE] 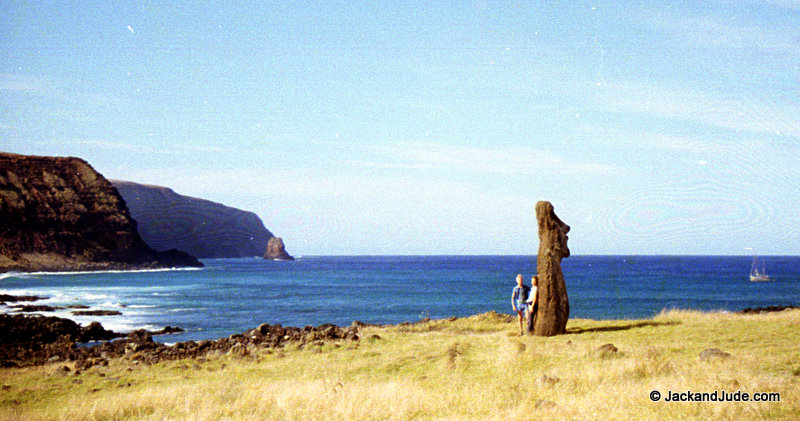 Tongoriki, the bay at the base of Rano Raraku Easter Island

AROUND THE WORLD IN EVER INCREASING CIRCLES