Attention Strahan Residents and Fish Farm employees in Macquarie Harbour:
Some of you may have seen our videos showing the plastic trash and bio-fouling that is littering and degrading the shores of Macquarie Harbour, and you may believe that Jack and Jude are attacking your employment, but we are not. We want more jobs for the residents of Strahan, and have actually made a proposal to the management of Tassal that will ensure jobs are not lost, and in fact, that new jobs will be created to remove the plastic fouling these pristine shores. It’s a win for all because the companies will be running a squeaky clean operation making all Australians proud, and the environment will again be worthy of its World Heritage status.

We’ve worked on the sea most of our lives ~ 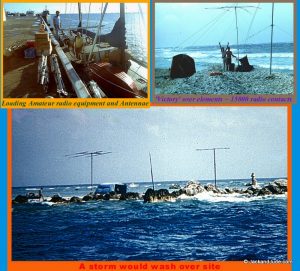 Twenty-five years working at sea around the world

Jack and Jude have worked on the sea most of our lives, so we know how difficult it can be at times. Macquarie Harbour can be very stormy, causing difficult conditions, when bits of rope or buoys etc can fly on the wind and float away from the farms. While the companies are working through techniques to reduce these mishaps – still, bits will get away and foul the shores, but this can be remedied by creating a small new team dedicated to walking the harbour shores, which is something like eighty kilometres in length, going round n’ round in a permanent job, collecting the stray bits of plastic ropes, buoys, and pipes. Then next spring Jack and Jude can make a happy video showing the team in action and squeaky clean shores, and that will lift and gladdening the hearts of workers, residents, investors and conservationist, in fact all Australians. After that we can applaud how actions taken together, can reap great results.

We just spoke with Mr Mark Asman, head of Aquaculture for Tassal, and he likes our proposal.
“We’re on the same Page,” he said before speaking about the huge effort his men are making to tackle this problem, but he agreed, they’ve not had a team dedicated to the task. We’re both looking forward to filming the team at work leaving a squeaky clean foreshore behind them. 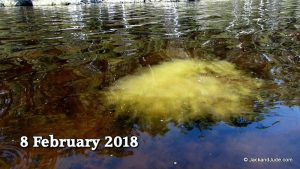 Mark Asman, Head of Aquaculture for Tassal, is coming to Macquarie Harbour to see for himself. 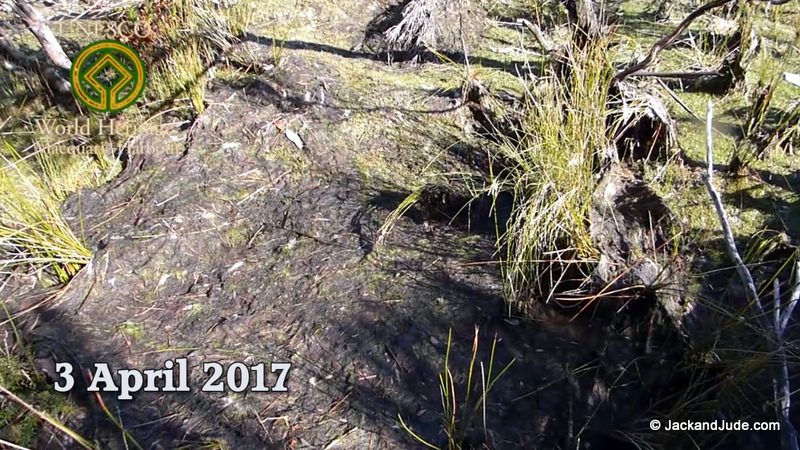 The Gunge flattens the shore vegetation then dries hard 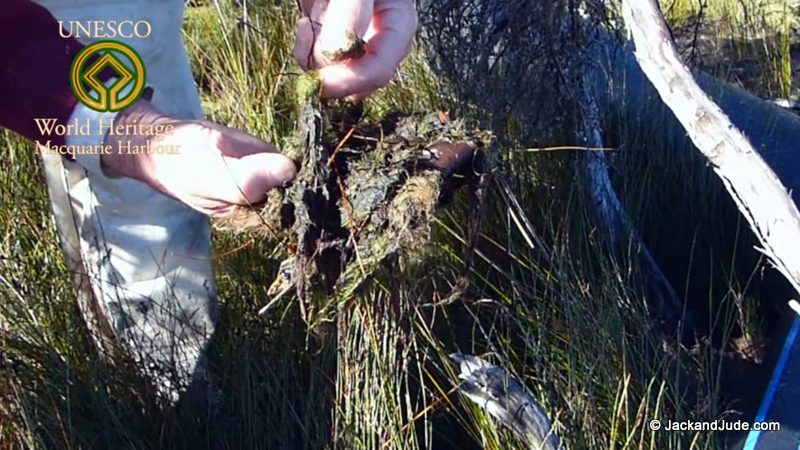 This first video is an area we visit about every six months, and while the large black-poly pipes are not seen so frequently, plastic rope still find their way ashore, and it is breaking down by sun and wave action. HD viewing is best – use the gear to select HD.

A few mornings ago, waking in gloomy light, rain pounding the deck bringing dampness below, found me snuggling under the doona, dreaming of bright, dry climes, and thinking it was about time to change hats once again. 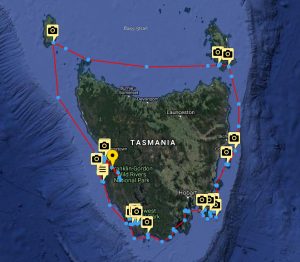 For nearly six months we’ve been transient, living one day after another often in different locations around the glorious island of Tasmania. We’ve had some grand adventures, and some trying ones as well, even a few dangerous encounters, but we’ve been rewarded with unforgettable memories. However, it’s time to tackle other dreams and desires. Our land based shack needs attention, our family miss us and we miss them terribly -and new horizons are popping up.

But we’ll miss this freedom. There’s no life as free as a sailor’s. With vistas spreading to the very edge of the planet that are open to the heavens, stimulating imagination and teasing the mind. They also ground our souls to the creation. To the reality that all this is real; the smells, touch, sounds, and sights; knowing that we share all this with the other creatures on this magical earth floating endlessly through space. Here, living life afloat, we totally immerse ourselves within the creation and shut out all disturbances to ponder whatever; be they memories or dreams, or nothing but the intricate workings of Nature. It’s a gift this vagabond life afloat has given us, one that Jack and Jude treasure and are ever grateful it came our way through hard work and good fortune.

Therefore, we are bedding down our treasured vessel that turn these dreams into reality. Cold rain and gloominess will continue to increase for a few months before easing to warming sunshine and clear starlit nights. Meantime, we’ll change hats to take care of other matters.

Since our last report, our lives have been very special. Our Strahan friends say they’ve not seen much of us, and they’re right. The first three months back afloat took us clockwise around Tasmania on a whirlwind thousand mile journey through a changing array of scenery confronted by various challenges; including a mid-journey working-bee on the east coast, long hours, up and down high ladders painting and maintaining our lady. On both sides of that particular challenge, we experienced an Attenborough life many dream of witnessing. We paddled our Green Machine amongst swans in very isolated wilderness – climbed mountain peaks to overlook fiords flooded in antiquity – and visited a tiny popup of land surrounded by empty sea with a wee cove full of penguins and seals. More recently, we hid ourselves away under the might of Tasmania’s greatest west coast mountains surrounded by placid reflective black water that doubled our views. In this anchorage, that we call our office, we went daily to faraway places, writing a tome of recollections about a long ago life when we were young, hardy and silly, taking our two teenage sons on voyages of education around the world – actually making all on board a lot smarter and aware.

Secluded and surrounded by Nature we did have other goals too. We joined a comrade to survey the unknown depths of a large bay fronting Macquarie Harbour, so that fellow boaties and yachtsmen will be able to navigate it safety, and enjoy yet another spot of wonder. 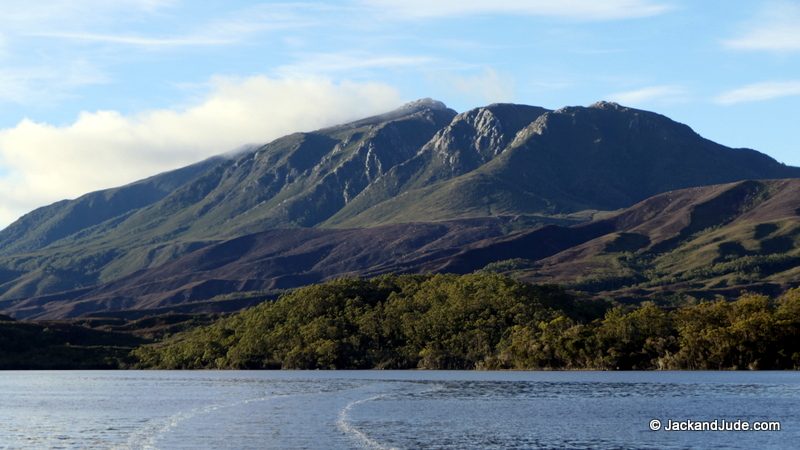 We are baffled – In between trips to our office, Parks and Wildlife fire bombed the slopes of Mount Sorell. We know autumn is the preferred time for intentionally lighting these fires. But we wondered why fire bomb the slopes of Mount Sorrel? There is little growth nor fire-hazard there. Just scant short tea tree and tiny tussocky button grass struggling to survive on nutrient poor slopes. We spent a day wandering round inspecting the aftermath, and became concerned that winter rains may just cause a fair bit of erosion. We had a meeting with Parks in Strahan, but received only assurance that there’s a knowledgeable group making these decisions. Oh well, they’re the experts. But we’re saddened that the Hairy Wombats surviving the fire will have to travel so far for a feed. 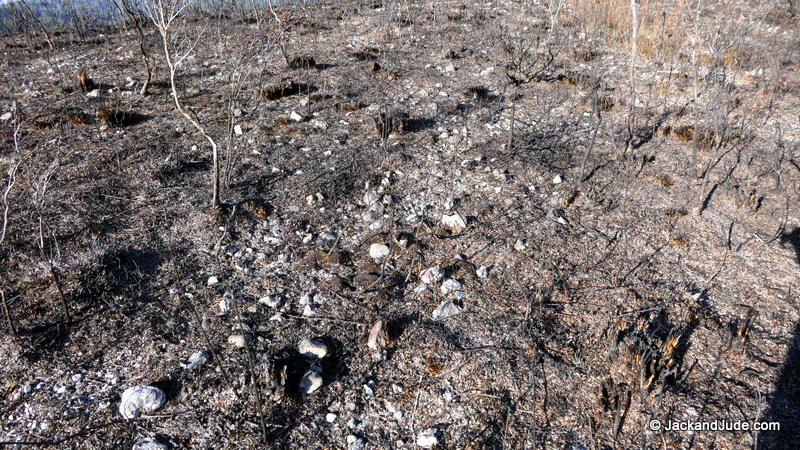 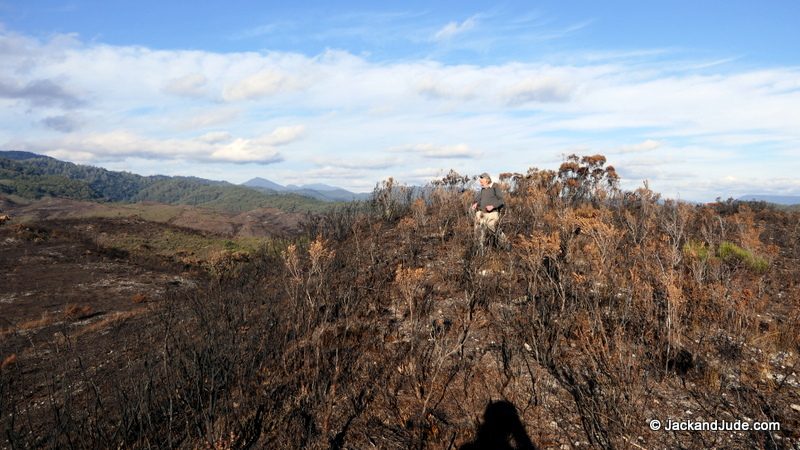 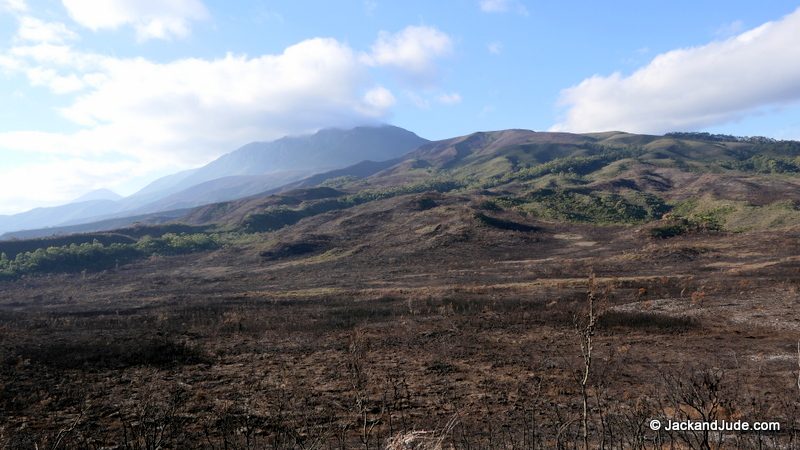 At our meeting with Strahan Parks and Wildlife, Mr Paul Helleman, the Ranger in Charge was asked if they had a boat? “We have a boat, but we haven’t had it out much.”
Judith then noted that there is debris on foreshores from the farms.
Helleman’s answer, “It’s the fish farms that take on that responsibility.”
Jude reply, “It’s in World Heritage area.”
Helleman, “They commit to pick that up, and they do when they are told.”

We’re not sure whether Parks has been instructed to keep out of the Fish Farm Issue, but we do know they are never seen inspecting the shores, be they World Heritage or what. That is why Jack and Jude have taken on this task.

Leaving the worst till last, we’ve all heard far too much on this election. Lately Jack and Jude have listened to many citizens crowing the fact that jobs will flourish, money will flow, jobs will be secure under the Libs.

Maybe it was Bob Brown stomping through Queensland telling those folk what they HAD to do, and/or maybe it was the minnows swallowing Murdock’s hate and fear spewed from his propaganda machines posing as news outlets, Whatever. The die has been cast.

Based on our seventy-five years of life exploring planet Earth, it appears a majority suffered a lack of faith. Yes, Labour was painted black like death, but it was very possible those with a new vision could have pulled us through a necessary transition that would have reaped tonnes of new jobs, and brought pride to us as a nation because whether you are a climate denier or borderline believer, as a nation we would have been doing something about the climate just in case. As it is, it will be the children and grandchildren that will be strapped with the burden from which you hope to gain. In our fifty years living here in this magnificent land of AUS, we have witnessed a massive loss in the Great Barrier Reef, once the envy of the world, a marvel of Nature. We had Koalas hanging in trees just about everywhere, we had a free and easy life of She’ll be right, a place where we had the time and inclination to help our neighbours, a place where legislation was sort of there in the background while we got on with our lives. We had droughts too. But none near as bad or as far reaching as today’s. And we still had fish in our oceans for us to reap for food and fun, and clean air, plenty of it.

We are not soothsayers able to see the future, but Jack and Jude have seen enough of life to know our shortcoming as humans is that we do not plan for a future of our choice. A destination we want to be in say two generations ahead. Do we really want to cope with greater population masses? Do we still want to be struggling for resources like water and clean air? Jobs and growth is today’s mantra in Australia, and while jobs are quintessential to our development, maybe they could have been in industries making our planet better, as well as our lives.

So tis time to change hats and get on with other matters, and with that, we wish you safe travels and promise we’ll stay in touch; changing hats won’t change our lives.