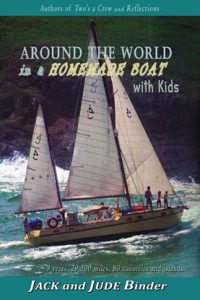 Late one afternoon after two weeks of good times, we hauled our anchor from the lagoon floor, and amid the hooting of horns and shouts of “bon voyage, safe voyage,” we hoisted cloth and aimed the ‘B’ towards the lagoon’s exit. Within minutes we were free of danger and relaxing on the dodger top taking in our last fill of the magical colours being left behind. Brilliant sunshine lit the white sand smeared with green coconut trees, which appeared as if a gumdrop upon the lagoon’s aquamarine that abruptly changed to an expanse of cobalt deep ocean upon which we charged towards an empty flat horizon.

You never know what to expect when crossing a wild ocean, in an eye-blink this peaceful scene exploded. Astern, the trolling line suddenly drew taut, stretching out bowstring tight and singing with seawater dripping off its braided cord. It kept stretching beyond belief, forcing us to pull back, fearing who knows what. When the line could take no more, the sea just behind erupted in an explosion as a monster leapt from the sea. The largest fish in the world, a black marlin, with sharp bill and enormous girth hurled itself into the air with our thread-like string straight to its mouth.

“Oh, my God!” I yelled, and everyone pulled further back. “What a magnificent creature!” Probably a thousand pounder tail-walked, throwing its head wildly side to side looking down upon us with mean angry eyes, like a black Moby Dick shimmering in the bright sunlight before crashing back into the sea. Then the line went slack, and so did we.

“Wow! Did you see that,” Jason yelped as I grabbed the limp line to check if our lure might still be there. Instead, I felt the sharp tugs of another strike. “He’s coming again!” And I jumped back.

For years, we had attached our trolling line to the port side mizzen shroud, the one running from masthead through a spreader down to the ship. This set-up can handle big fish. But this creature was immense. We use hefty braided cord for much of the run, and during this monster’s second strike he drew back with no violent tugs, as if trying to halt our ship and the line didn’t snap. Who could tell, with such colossal strength, the beast might twist the wooden spreader off and pull down the mast. During that strike, my mind raced indecisively in circles; should I cut the line and lose the gear, or wait and risk damaging the mizzenmast. When at last the line went slack again, without a moment’s hesitation, I raced it in, and surprising us, at its end still lay our lure. Mangled to be sure, and its stout double hook straightened into twin spears.