Dhyana: profound meditation which is the penultimate stage of yoga

After raising our children afloat came a time on land while we gathered some assets for our future.  Between busy work spurts, to help us recharge, we turned to trekking the wilderness as a way to get our Nature fix.

One of our favourite jumping off points was Raspberry Lookout on the Gwydir Hwy, three hours drive from our shack, where a simple viewing platform at the end of a tiny road opens up a mind-boggling forest for as far as one can see. Far away, the mountains and valleys crisscross the great Mann River system.

Beyond the guardrail trends a long ridge once used by the aboriginals to traverse down to hunt game, fish and shells. Later on, early settlers ran supplies to where cattle grazed along the river flats. Self-reliant miners and timber-getters also used this route early last century.

Jack and Jude have been down into those valleys dozens of times. We never tire of their pureness; we never find cigarette butts nor claggy snotty tissues, or footprints except our own. And yet there are secrets to be found. 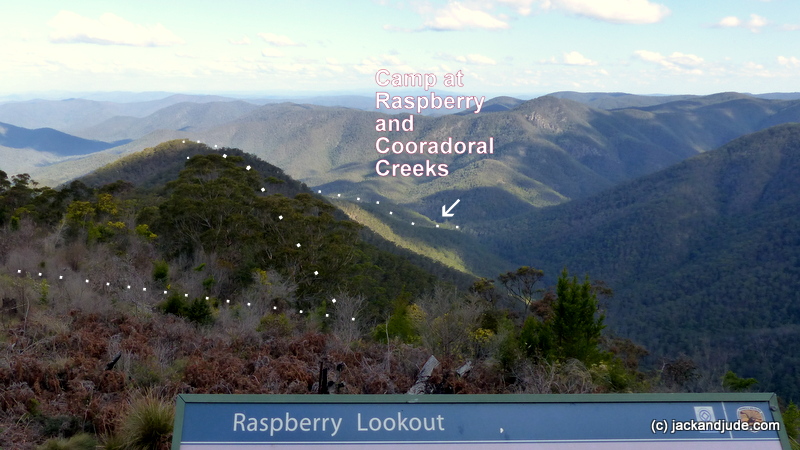 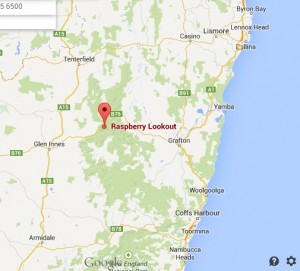 It is steeply downhill from the lookout, and if the shortest route to water is taken, the start of that sidetrack is scary steep and tricky. Just at that spot we are carrying lots of weight. Besides our gear, at the start of a week-long trek there’d be four kilos of red wine in my backpack. That mountainside is so steep we cannot see where it trends and we sure do not want to miss the slender spur that sleuth-ishly forms. Or we’ll be finding ourselves descending into a fast forming ravine as has happened before. 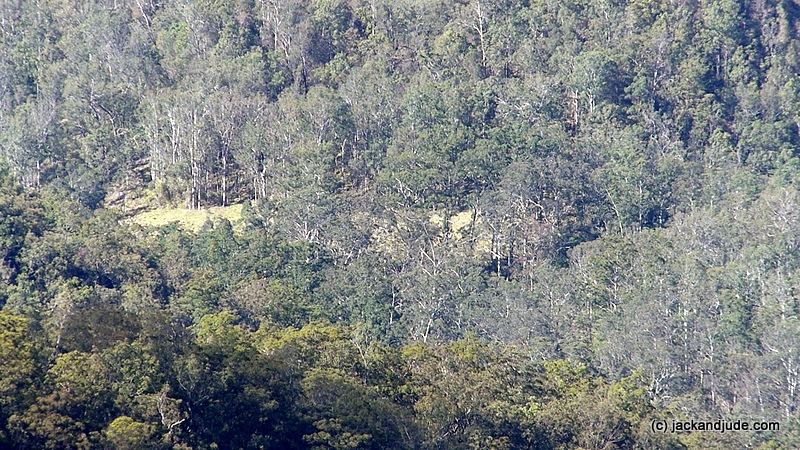 Grassy flats at confluence of the Raspberry and Cooradoral Creeks

Last year’s broken knee saga was a scare for both of us, and while that is ancient history now, several knee doctors advise that if we’re going to think “off track” then best hang onto the real knee, albeit damaged. Therefore a few weeks ago we tested Jude’s knee for weight bearing on irregular surfaces, trekking to South Bald Rock with four days of supplies, reached by walking 10 km along a reasonable well-made fire track. As reported then, Jude performed exceedingly well. She was less puffed than I, had little trouble, and certainly no pain. She could even manage up and down the pink granite tors. 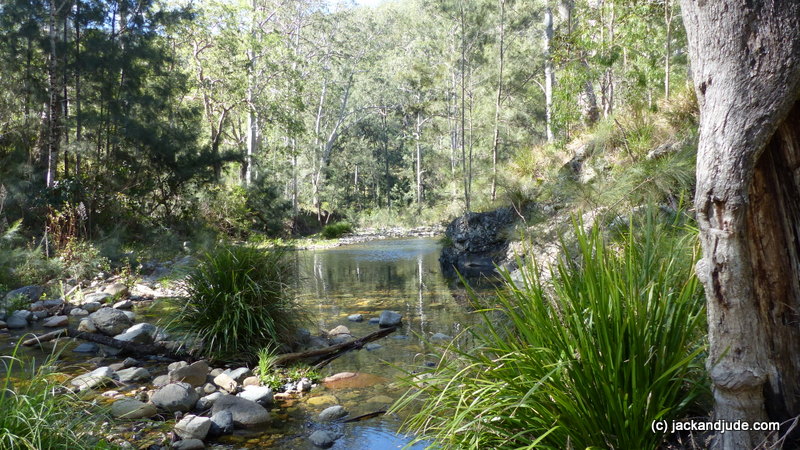 Imagine floating on a lilo listening to birdsong

Below Raspberry Lookout, the forests along Cooradoral Creek are ancient and have never been logged. Super straight trees dominate with regal grace over the bracken and grass paddocks found in those lost valleys. No greater peacefulness can be found than under dappled sun watching tall giants sway slightly to the steady chime of water streaming around and over rocks. Here’s the rub; this paradise, even for a youngin’ with two good knees, is quite a challenge to reach. We know that from experience, but we both wanted the challenge and knew we had to lighten our loads, and then take our time. In the last several weeks poor weather or appointments kept us at home base until the day after Father’s Day when a free week and clearing weather set us in motion.

The clan had gotten together for a yummy roast dinner, hosted by Jason and Ally, and in grand style we three fathers celebrated our good fortunes, Jude and I then sliding off to finish packing our rucksacks with Jerome’s gift of liquored chocolates tightly under my arm. It rained most of Monday and we camped with misty drizzle in the Boundary Falls campsite that night. From the lookout the clouds were clearing and the grassy paddock at the confluence glowed attractively. 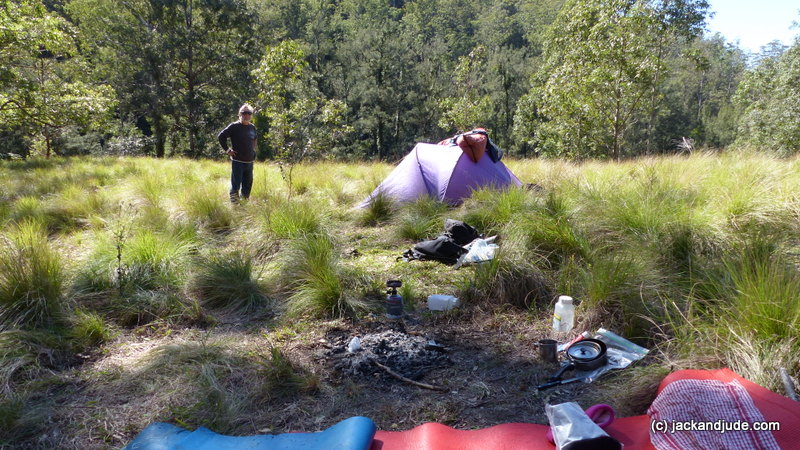 The walk down did not become a nightmare, no call to the rescue helicopters needed, but it proved hard on bodies lacking fitness. Jelly legs attacked Jude so at the cross-tracks I elected to take the short steep route down while she still had some strength. The heavy going down put me in a pressure cooker with aches from newish footwear making each step a painful one.  Gaining the creek, we camped on the first open area, and once setup with a glass of wine, the day’s achievement seemed rather great and so we had several more while the fire crackled and moon glowed.