CHAPTER 27
Around the World in Ever Increasing Circles

OUT THE OTHER END 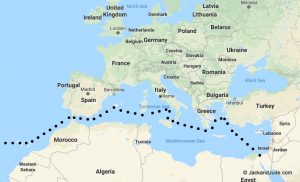 While the autumn wind felt considerably colder than our last summer sail, the wind never became strong, making our voyage a slow, carefree three days to Sardinia. Our sea and sky remained empty until late the last afternoon when the tall mountains of southern Sardinia added their majesty to the vacant horizon by blossoming from the distant haze. Arriving right on cue, the sharp peaks and mountain slopes looked empty and prehistoric when seen backed by the darkening somewhat leaden sky. Looking at that sky, I tapped the barometer and felt a slight stir when the needle dropped. Immediately I worried a blow might be coming and rebuked myself, thinking how easy it is to become frightened with autumn upon us.

The day began to turn into night as we rounded the island’s southern tip basking in the natural blend of land and sea coloured by a setting sun with our awareness of life heightened by the mounting excitement of approaching a new port.

Closing in on a large bay, the wind came off the mountains in strong gusts, which put Banyandah on her ear and that brought thoughts of reducing sail for the first time that trip. The night wind brought a chill requiring woollen caps and coarse fishermen boots be dug from the stern locker. Two jumpers would not enough when taking in the big genoa used in the light winds all the way across. As I worked replacing the sail with the more robust, much smaller number two jib, the night sky darkened as twilight clouds followed the sun, leaving behind a jet-black sky filled with stars close enough to touch. Beautiful, but to me that clear, crisp sky looked perfect for strong winds.

Jude announced dinner as I finished the sail change, and hungry, ready to eat, but Banyandah needed attention as she closed with the only danger in her path, two hard to see above water rocks. So, as sometimes happens, Jude and I took turns eating; one on watch peering ahead into the darkness, the other gobbling down the meal while expecting any second to hear a cry for action stations. That didn’t happen. An old stable horse like the ‘B’ knows where to go and where not and missed those dangers. Instead, she entered the bay with the lights of Cagliari casting a broad loom across the waters in front of us.

All that evening, the wind continued to get stronger but never became more than a stiff thirty-knot near gale with lots of gusts, nothing Banyandah couldn’t handle. In fact, we didn’t even bother to reef the mainsail, she romped on so well. Now, if we hadn’t been in the lee of the land, which kept the seas from building, we would have done some black night dancing out there on the foredeck. Quite the opposite, Jude and the boys slept soundly while I rode my rocking horse across a star-filled night. What a treat! Speeding across the black emptiness watching the loom of a new destination growing brighter, ducking back and forth below to where our sick echo sounder lay in bits. What’s that limerick? “A captain’s work is never finished…”

AROUND THE WORLD IN EVER INCREASING CIRCLES

The published paperback will reach approximately 520 pages with 150 illustrations and photos.
More information and purchase here.