It’s starting to rain, and so a good time to ease off after a hot, somewhat hectic journey across the state of Tasmania by bus, that landed us back on board the good ship Banyandah. It’s taken a week to make the transition from landlubbers to life afloat, but we’re now dead center of the ever changing theatre of Nature – Amazing and feeling privileged. No wonder we don’t think about TV when afloat.

We found our lady squeaky clean, washed by the many west coast storms, but dry inside, no mould, or maybe just a titch round the plastic aft portholes. 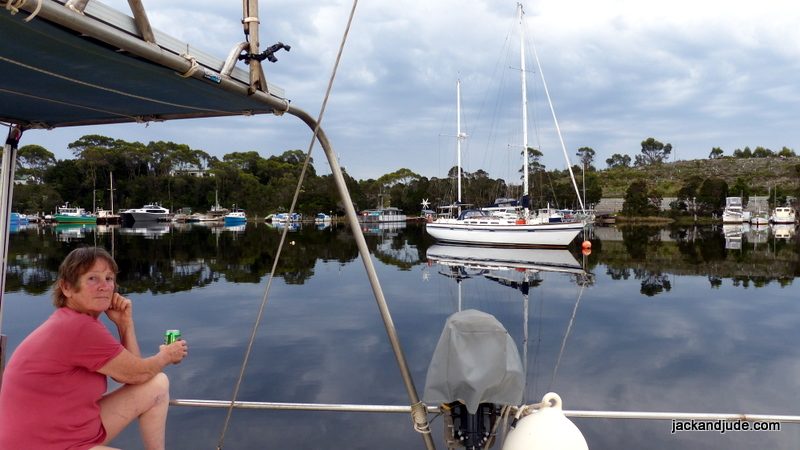 At Peace ~ Back Afloat

Hip hip hooray, once again Jack and Jude have made the transition from landlubber to life afloat, and it went swimmingly thanks to good friends Barry and Wendy who picked us up from the airport then eased us into their lovely place under the shadow of The Mountain. 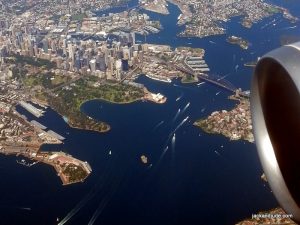 Demands of air travel
We’re not sure how we survived the rush of people and demands of air travel. Straight away in Ballina, our journey began poorly when the Jetstar check in could not send our bags straight through to Hobart as we’ve done many times with Virgin Airlines. Instead, we were told we’d have to claim them back in Sydney and re-check them in for our flight to Hobart. Naturally that put us on edge straightaway, and then it got sharper when forced to drag our chunky rucksacks around Sydney airport for the two hours before Jetstar started checking in luggage for our flight.

Threading our way back and forth like a snake, we presented our bags, one at a time as directed in just the right way on the weighing belt, straps up, head facing in. We knew we’d just scraped under the 20 kg limit, but were surprised by what followed when asked to unload our cabin luggage onto the same belt. Surprised, I exclaimed, “No! That’s being carried on board.” To whit we were told all luggage gets weighed.

Geez, we’d heard Jetstar had a penny pinching mindset and therefore we’d taken great care to keep all our baggage within their guide. And so, all of our cabin luggage went on and was tagged, except maybe our walking sticks.

Thinking we’d passed the final hurdle we moved on to the hunt for something to eat in the food hall. Jude found a great salad combo, and I went for a chicken salad roll followed by a Mercury applejack. That got us feeling happy and satiated, so somewhat elated we progressed from the food hall to the boarding lounge, passing many inspectors and snoopy guards a minor hiccup compared to what happened when we came up against dear Marie, an ex pom for sure, and judging by her demeanour an ex prison guard bellowing her abrupt order to halt. Thou shall not pass her scowl told us.

“You can not board this aircraft with those ***.” And she uttered some obscure jumble of CAPITAL letters like SWS, which could only mean Supportive Walking Stick if my rather poor hearing heard right.

At that moment an unpleasant event began. We were boarding towards the last of the queue, and protested that for half our journey their airline had allowed our walking sticks, and that here at their baggage check in they had been allowed without fuss. Marie fired back a negative tirade on what others might do didn’t matter that held us up until their young boarding manager arrived and declared that the sticks would have to travel in the next flight’s cargo hold. “As of two o’clock today, they are classed a weapon,” he said.

“Hold On,” I protested. “My lady broke her knee a few years back and feels more secure with her stick.”

This only brought from the young manager, “Sorry, Airline Rules, They‘re now classified as weapons.”

OMG! Why not just give them to a stewardess to hold. 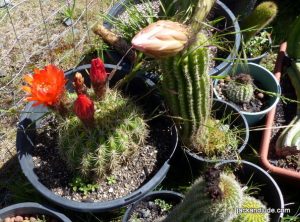 Good thing Barry and Wendy came to our rescue. Straight away we were whisked away to their magical principality hidden from all except those invited. With Mt Wellington on one shoulder, New Harbour and up the Derwent to those magical mountains filled the other, in between there’s an open plain out front surrounded by tall trees where wallabies and pademelon graze from twilight. And under a clear night sky, with nothing but stars and a waxing half moon we relaxed with folk we love.

And from there we made the dreaded phone call to retrieve our precious sticks. In an hour long phone call, we arranged to get them back. Not the next day as promised, but they did arrive back.

In that mountain hideaway, we each did tasks with nothing planned except maybe the meals. And we all took a turn at cooking and cleaning up. In the quieter moments we even fixed a well loved microwave whose turntable refused to spin and Jude cleared out a huge patch of weeds after the rains had softened the ground. We even managed a day in town investigating new foam for our bed and obtained supplies cheaper or not available in Strahan.

In-between times, I flew my new drone, the one replaced by Macarthur Camera House after the original proved to have a camera malfunction. The new one flew beautifully right from the first takeoff and I had a ball exploring the area again after flying the Phantom 3 here in May when going out. 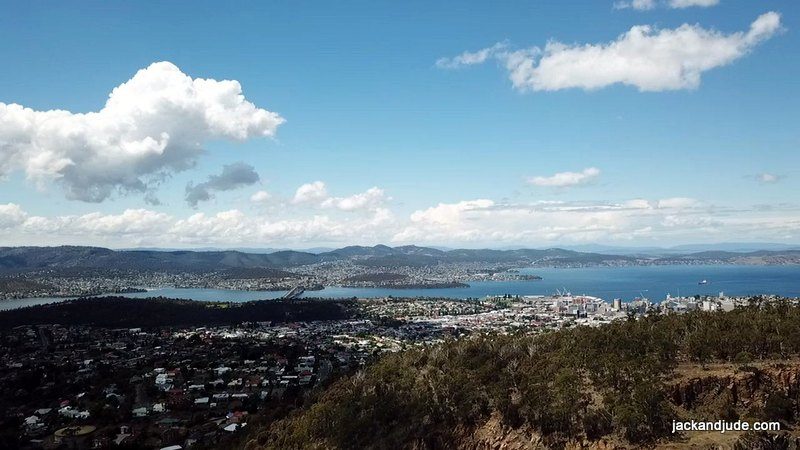 Hobart from the drone

Our new bird, name coming, is so much fun to fly, and there’s plenty of time with the bigger battery, so no need to rush, just get everything set up and then the device performs. I took off and preformed many missions successfully over the four days, learning and practicing techniques. It’s like sailing a boat across an ocean, be informed, be prepared, be clever and bold. 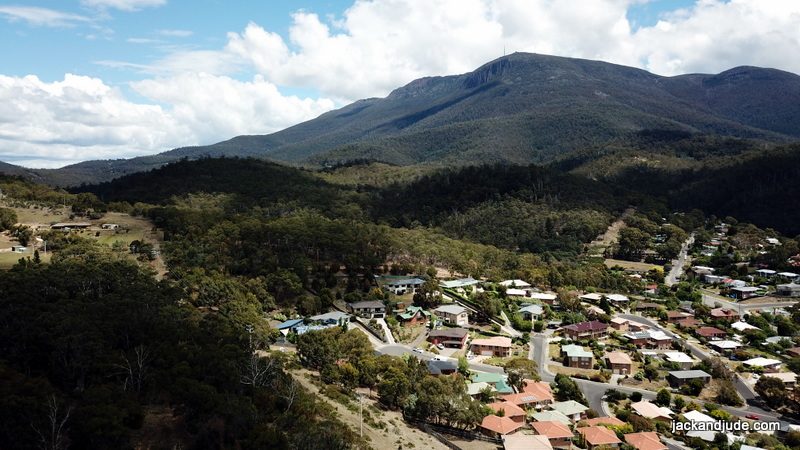 Mt.Wellington from the drone

So, those first drops of rain upon arrival turned into a mild storm welcoming us back to life afloat. With the awning up, and hoses connecting it to our water tanks, the night sky darkened and then poured pretty much all that first night. Daybreak came muted under thick grey propelled by 25 knots out the cold south. Boat bound on day two, we continued packing away our clobber, and then turned to writing up our diaries and stores lists. Later we watched a film. Day three afloat began the same way with the same cold southerly whipping up the bay. Hmm, a good day to stay home. So we watched the Rugby League World Cup final, streaming both the women and men in action. Now it’s Monday and the weather is much finer, so time to go ashore and say hello to Strahan.