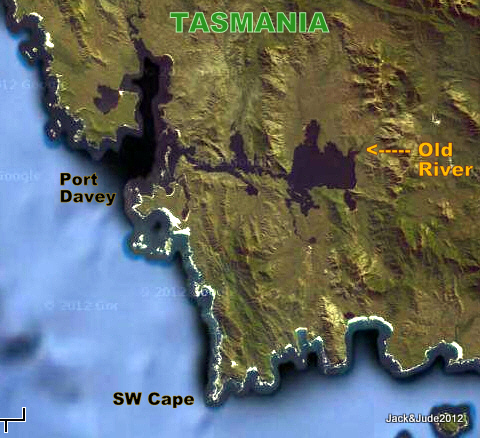 In the early morning after a mild storm had passed, the sky brightened to clear lapis blue and the air stilled as if Aeolus the wind god was holding his breath. Nudging Jude from her first moments of waking, I whispered “C’mon. The day’s perfect to try crossing the Old River Bar.”

Across the mirror smooth basin surrounded by bare mountains of buttongrass and white rock, the river conquered by early Huon piners had been tantalising us since arriving in Bathurst Harbour. Draining tall mountains to its northeast and more from Ripple Mountain and Mt Picton where in the 1860s piners Doherty and Longley dragged their punts up rapids, risking life and limb to harvest timber that’s feather light and never rots.

The day before the storm, Andrew and Judy off Reflections out of Hobart had rafted alongside. While the ladies brewed coffee, Andrew, an engineer and Coast Radio volunteer with a keen interest in the remote South West Tasmania, took me below to dig out a sounding device he’d constructed that clips onto his rubber ducky and connects to an upmarket GPS which then records data from the sounder. Clever. All he has to do is traverse back and forth to sound a river mouth or bay and the device will log depths at exact locations.

“You beauty,” I’d exclaimed when he offered his soundings for the notoriously shallow Old River Bar exposed to the stormy southwest. Andrew explained he’d just confirmed this data the other day when taking Reflections, drawing five and a half feet, a mile upstream. Great! Now Jude and I could do just that very same thing, take our six-foot draught Banyandah into the safety of the river to launch the Green Machine for a paddle up river.

Andrew then further delighted me by handing across his coordinates of a stand of mature Huon pines found further up that river. Isn’t it grand how the yachting fraternity helps each other.

When we got underway Andrew’s waypoints were already programmed into our GPS, coloured blue for those with sufficient water and red for those too shallow. (Anchoring Guide updated)

To the slow throb of our six-cylinder diesel Banyandah edged closer to Swan Point, its abrupt rock ledge a mere boat length off when we turned to face a calm expanse of mirror bright water surrounded by rising land topped with green forests. Across the mile gap to a narrow opening we could just make out odd bits of timber poking up and wondered whether they were old channel markers or the limbs of dead trees stuck on shallow flats. With little time to ponder, a hundred metres on lay our first challenge, a patch of skinny water with just our draught if Andrew’s soundings were correct. 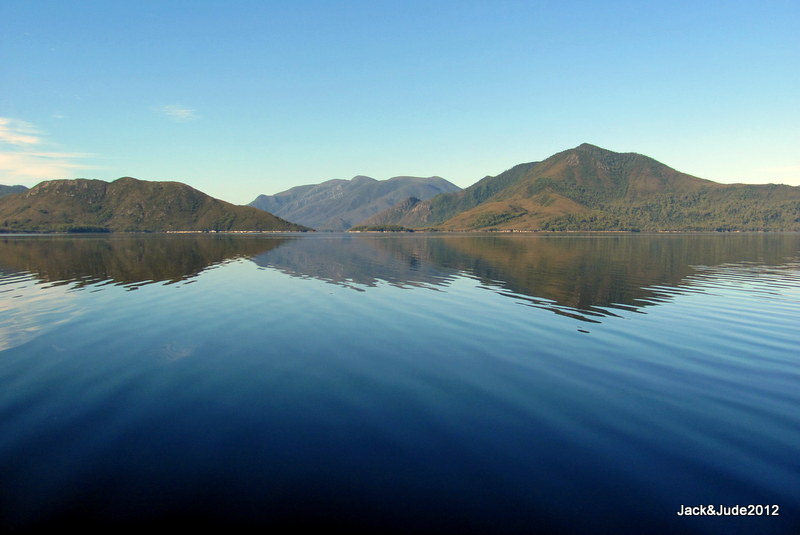 Bathurst Harbour is somewhat similar to Macquarie Harbour in that its rise and fall is not just determined by astronomical movements. The huge expanse of water is held back by a narrow opening not much wider than Hells Gate, and so both barometric pressure and wind direction also affect its depth.

I’m always on edge when doing these things, wondering whether we’ll clear, the rum coloured runoff from buttongrass and tea tree making it impossible to see down more than a few inches.

Watching Banyandah’s blinking icon jump forward after an excruciating long delay I called up, “Right a titch, another 5 degrees.” This is the most nerve-wracking way to navigate, waiting for that silly blinking icon to update from an unseen satellite while we blindly slip forward through black water. From past experience we know there’s a delay while data is processed, so my lovely helms-lady only occasionally engaged the gears to creep Banyandah forward at less than walking pace. Meanwhile shallow alarms start ringing and with an edge in her voice she calls out that we now have “just six inches under our keel.” I tensed, dreading the touch of bottom, hoping not to ground on a sandbank exposed at 43° south.

Never in any real danger, we scraped over that skinny bit, smiling when we heard the alarm stop ringing then enjoyed two feet clearance throughout the remaining half mile to the river mouth, where next to a natural rock training wall, the depth suddenly plunged to double our depth. Jude then handed me the helm and straightaway I began zigzagging across the river sounding its narrow width, mapping an area to anchor. In doing this I ran us aground, only lightly, but then complicated our situation by running Miss “B” side-on to the bank when turning. There was a chance we’d jam our rudder backing off, but short of kedging off, in the end, going astern with power was the best choice. 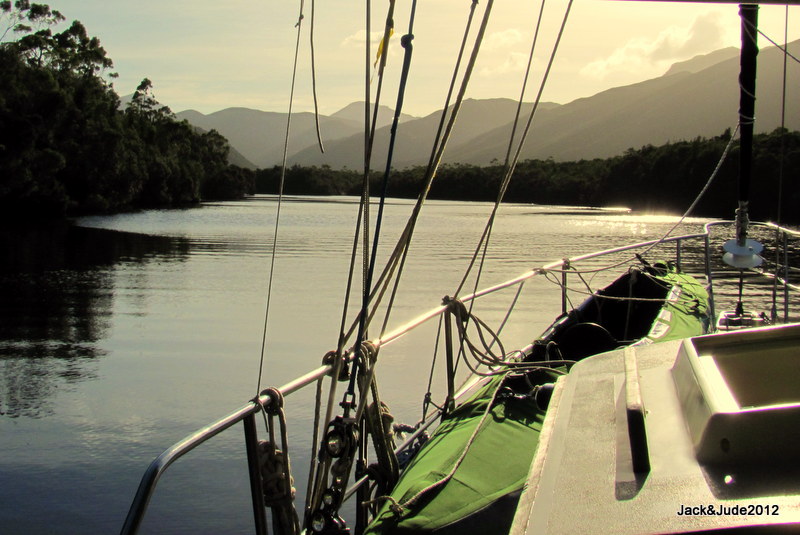 Mapping an area to anchor

Nerves jangling a bit, suddenly the riverbanks seemed a lot closer. Nevertheless, we continued to sound and found a suitable, albeit tight spot to drop our hook and proceeded to pull it in. Only to hear rumble, rumble, under easy power it grumbled across a scoured rock bottom.

Starting to doubt the wisdom of entering this river, we proceeded further upstream, past a narrow section marked by Andrew as having deep water. When it opened out again, deadheads of submerged trees were not far ahead. We tried to anchor just before them, but same story, the anchor bounced across a rock bottom.

I’m starting to feel slightly anxious. The morning is flying past and our time to paddle upstream evaporating in disappointing attempts to secure our baby. And Jude’s yammering in my ear that maybe it’d be best to exit the river and lay to anchor near the river bar. But I’m thinking I’d never relax going hours upstream knowing our vessel lay exposed to miles of fetch. In the end we decided to anchor in that slender section and run lines to both shores. Jude did the hard work, rowing ropes from both bow and stern, tying them to trees at river level. Out the stream in a deep hole close to one bank we prepared the Green Machine for our excursion; lunch, medical kit, GPS, PLB, and warm clothing and rain gear. 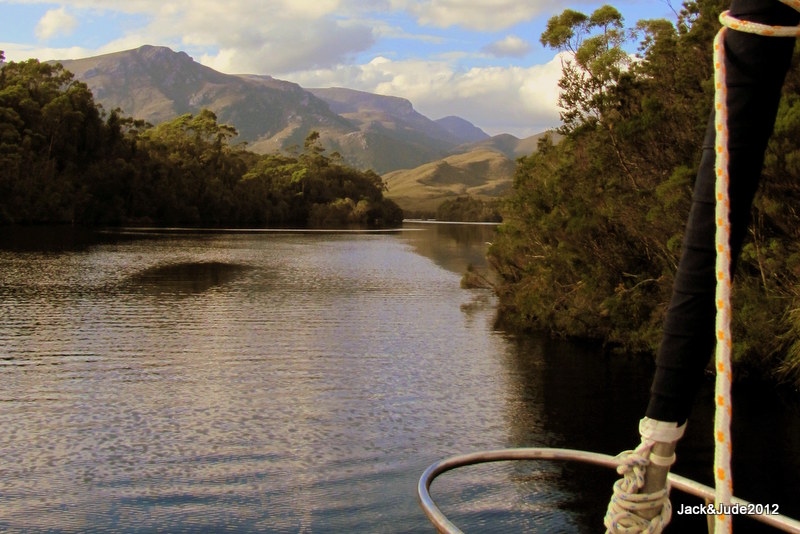 Paddling away was a beautiful sight of our baby floating serenely against deep forest greens reflected in the river all around her. Paddling is such fantastic exercise, with no sound of motors the glorious forest echoed with birds singing, and our difficult morning was soon forgotten. 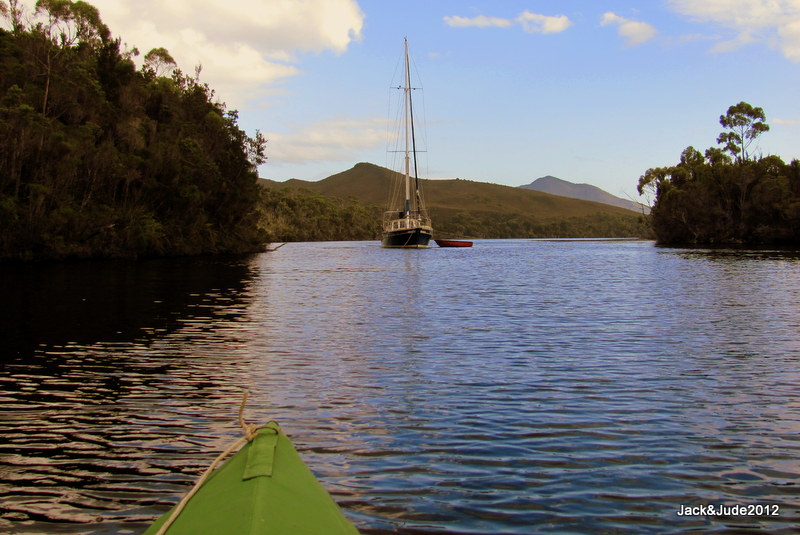 Twenty minutes upstream the first obstacle appeared and following Andrew’s instructions we took the right-hand stream past an island, the handheld GPS now looking for the departure point to the mature Huon. South­-west riverbanks are mostly abrupt with trees thick to the edge. But when the waypoint hove into view, an open muddy area gave access to the forest. 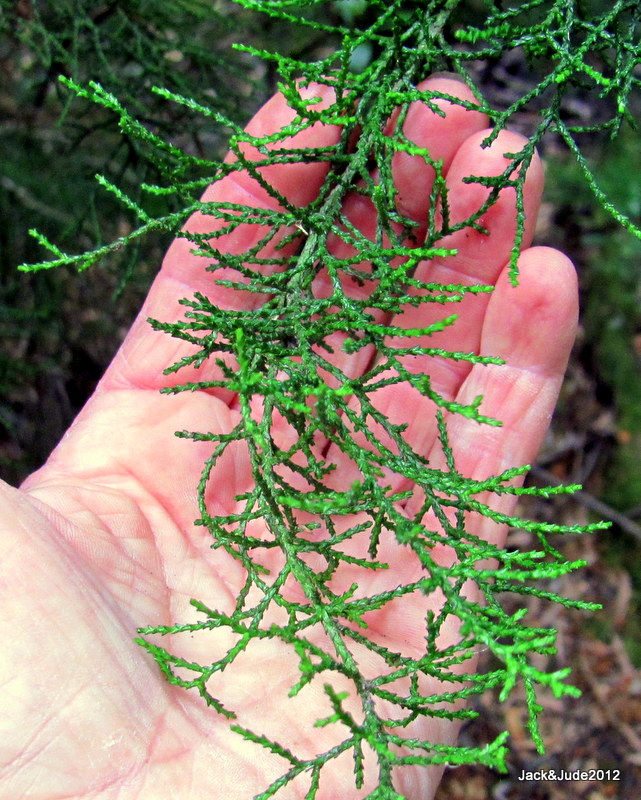 On terra firma we changed into walking boots, put on our kit bags and straightaway had to push through thick scrub. Following our GPS we occasionally spotted broken twigs or crushed clumps of razor grass, indicating others had been there, but more often the terrain required our bush skills to locate the easiest route. Through deepening bog we crossed a small stream finding the drooping green of baby Huon. Then some distance further, through a bit of thick stuff, we found the first big trees.

Research says Huon grows a millimetre in diameter each year, so the fellows next to us were probably hundreds of years old when Abel Tasman first discovered this island in the 1600s. They may not be giants, but after the Huon decimation of yesteryear, they are probably some of the largest Huon pines left on the planet. 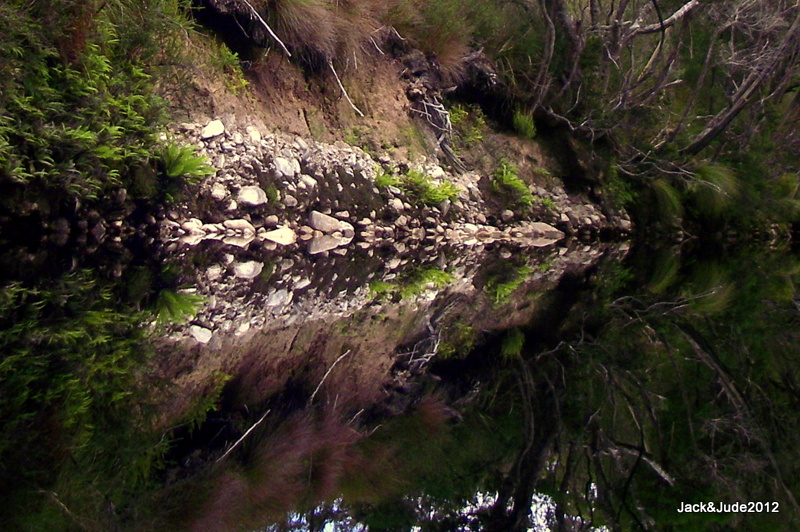 Back again as river rats, a brisk paddle upstream rid the chill from that forest, then we enjoyed a leisurely stretch that ended when the first of many shingle rapids appeared, white water right across indicating no chance of paddling up it.

Grateful I’d been a gymnast, I ‘hopped out’ very carefully, then steadied the craft so Jude could find her feet on the polished stones. 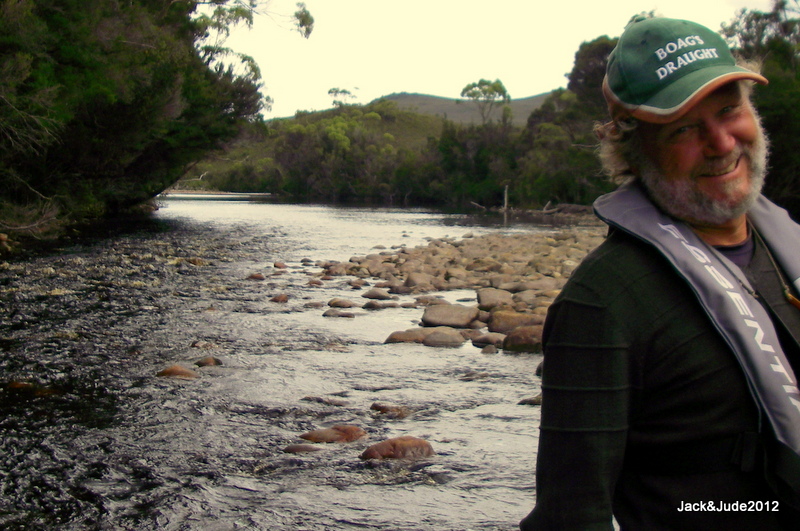 Grateful I’d been a gymnast, I ‘hopped out’ very carefully

The olden day piners used to pull their punts up rapids using a long rope while another guided it. But Jude and I don’t want to risk breaking any bones and like to hang onto our kayak while pulling her up white churning water. It’s cold work, often up to our thighs in mountain water.

Once above that first waterfall, we again set off at a blistering pace, not just to get warm, but to not be sucked back down through it. 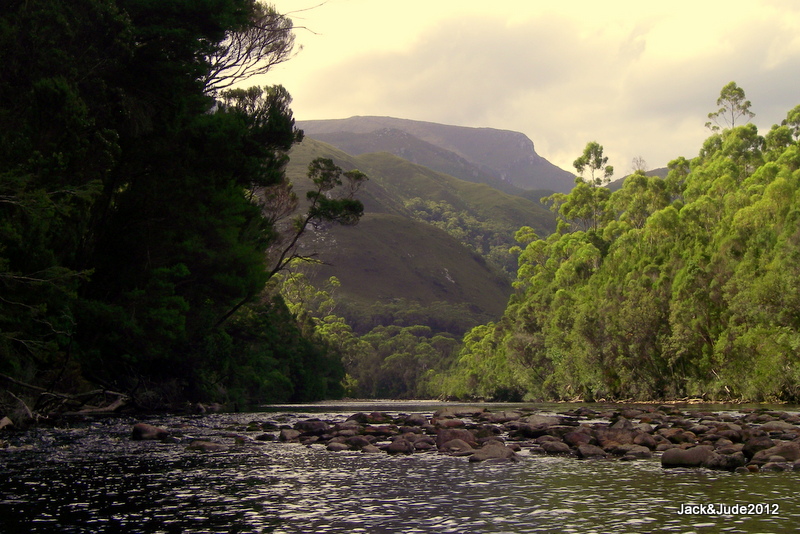 During the afternoon between rapids we enjoyed stretches of tall forest touching the river with distant mountains seen down its length while all around the sounds of Nature filled our souls with the joy of life. Sharing the work in our double kayak eased the load as we silently slipped forward clicking pictures, shooting short video clips, coming upon a platypus, a trout jumping, twin eagles soaring overhead, all without disturbing nature very much. And this reinforced our pledge to do what we can to save this wonderful planet from over development.

Till next time, we wish you beautiful sunrises to start each new day,
Jack and Jude