If you’re reading this, it means Banyandah has successfully crossed one of Australia’s most dangerous river bars, The Richmond at Ballina – not dredged in twenty years, and we’ll be sailing towards the deepest depths of the Coral Sea on a new voyage of discovery.

We had planned to depart a week earlier but upon awakening the morning before, I first heard then felt Nature’s destructive forces pound away at Australia’s East Coast, and a foxy smile showed how pleased I was not to be upon the high seas just then.

Being bar bound at Ballina may have saved our lives. That storm’s awesome power took two young lives off the south coast. Lives extinguished by being poorly prepared and a sad reminder of what happens when underestimating Nature’s forces.

Since that morning, our home on the water has waited patiently at the dock, riding high on her marks although her lockers were full with food and supplies, enough to last six months in the wilds beyond civilisation. We then topped up her 500 litre fuel tanks, although that was only a precaution as we burnt less than a hundred litres all last year while our lady travelled several thousands of miles. Our 700 litre water tanks were also filled, after holding off taking on board the offensive smelling local water. During the last storm, with filler hoses connecting our huge awning to our tanks, we had waited for the heavens to open. Alas, the winds may have blown strongly and clouds darkened our skies, but little heavenly water found its way into our tanks.

TO LIFE!
What a glorious moment to take breath upon Earth. At this time a common person can rise to the pinnacle of discovery and experience first hand the wonders of creation while being in command of their own course. But ahead, today’s freedoms are challenged. And by chance or destiny Jack and Jude have found in their four decades exploring Earth that the kingdom is gravely under threat.

The journey before us will be long and difficult but we hope it will bring the faraway much closer to those unable to make this journey. Our purpose – to help reconnect mankind to Earth in the hope that future rule makers will Put Earth First. Nature abounds in these wild regions and it is under threat from many quarters. A rapidly growing human population need sustenance, resources, and materials, much of which comes from the sea. Having spent our youth and middle years roaming Earth’s wild places, it is now our mission to revisit Australia’s remoter parts to compare today with what we recorded in yesteryears, and then make a layman’s assessment of any changes. Increases in pollution will be easy to spot. Changes in bird numbers will also be easy to compare. Comparing fish stock will be a bit more subjective.

We also hope to bring back adventurous stories, photos and new videos of the wild regions to entertain, educate, and inspire.

THE FURTHEST AWAY
Back when our children were young, we commanded five expeditions to mid-ocean rocks and islets where we established base camps so that amateur radio operators could contact other amateurs in all parts of the world during frenetic day and night operations usually lasting 1 to 2 weeks. All up, we were away from land for up to 5 weeks, looking after shorefolk and their gear, getting them safely to their destination, setting up and back again. I’m pleased to say we have a perfect safety record in all kinds of conditions, all achieved using a sextant. We are delighted to have lived in that era and truly think every blue water sailor should navigate a sea at least once by the heavens. Besides being a buzz, you become even more connected to Earth, the sun and stars. 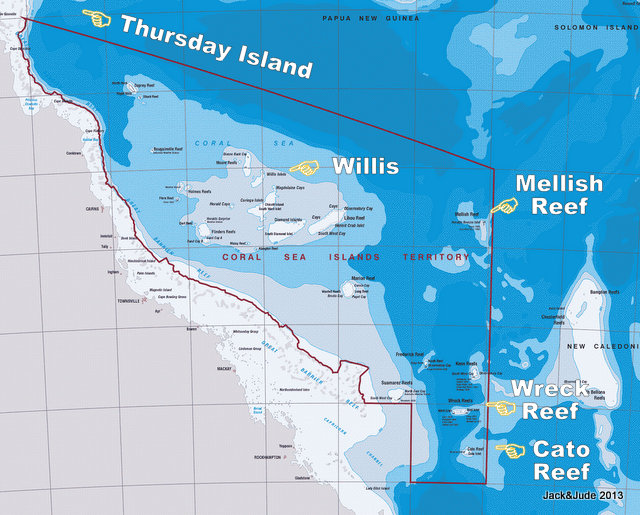 In 1978 our first expedition sailed out to Australia’s last bit of territory in the Coral Sea, Herald’s Beacon, 580 NM east of Cairns. The island is a small cay measuring 600 m by 120 m, and only rising a few metres above the high water mark. It sits atop the boomerang-shaped Mellish Reef, around 10 km in length and 3 km across, which provides reasonable protection from the reinforced trade winds expected at this time of year. We visited Mellish a second time in 1982.

HISTORICAL WRECKS
Extending throughout the Coral Sea is a matrix of other reefs and islets, many with historical wrecks littering their edges. One of the first and most famous shipwrecks are the colonial sloops Porpoise and Cato which were lost on Wreck Reefs in 1803. Matthew Flinders had left Port Jackson as a passenger in the Porpoise, which had been refitted to carry his collection of plants and papers. They were accompanied by the Cato and Bridgewater. Eight days later (17 August) disaster stuck with the Porpoise and Cato striking the uncharted reefs to which this incident then gave its name. Almost all of the specimens collected by Flinders during his two year circumnavigation of Terra Australis were lost.

GOLD
In 1852 during the gold rush years the barque Thomas King of 346 tons struck a reef east of Cato Island Reef and became a total wreck. Some of her boats were washed away but one that remained set out for the mainland to seek help, leaving survivors on the reef. After 14 days they were rescued by the whaler Lady Blackwood. The other boat eventually made Double Island Bay, but when the occupants set out overland for Moreton Bay they were tracked down by aborigines and all but the captain and one seaman were killed. At the time of sailing it was reported that there was 13.45 kg of gold aboard the Thomas King.

THE BOSS
In a continuing effort to share unbiased information on new marine equipment, we have made arrangements with Manson Anchors to test their latest creation. Taking over duties at Banyandah’s bow, and replacing our long serving 45 lb CQR, now sits a 45 lb Manson Boss. He’s much bigger in fluke area making him a bit more difficult to stow, but if he holds first time every time as we hope, we’ll find the best stowage even if we have to modify our roller arrangement. In the coming months we shall be sharing with you our results of anchoring in all Australian bottom types. 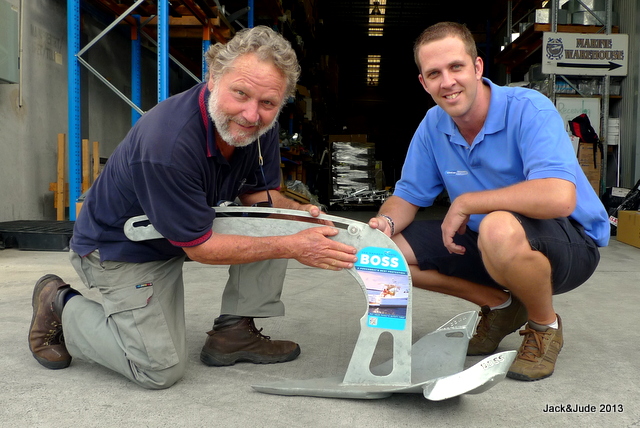 NEW EQUIPMENT
During our two months alongside at Ballina, we rebuilt our trusty windvane steering device, Sir Aries, bestowing upon that hardworking, uncomplaining crew member a royal title. We also modified its control line attachment to our steering tiller, hopefully making it easier to lodge the control lines into their jam cleats. In gales and strong winds, especially on black nights, our old method required a deft strong arm that has been proving more awkward for us. 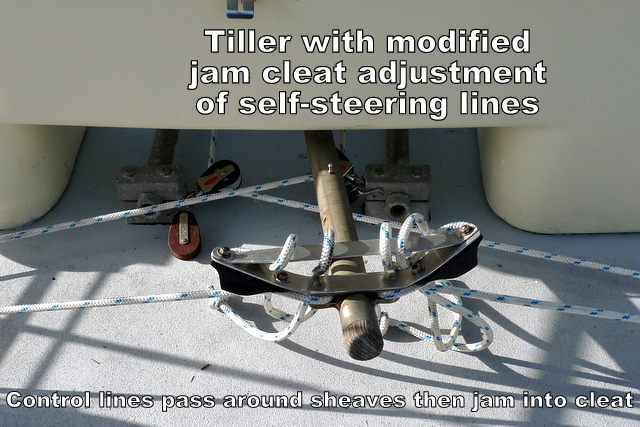 We also replaced our vintage outboard with a first-pull-start 5HP Tohatsu. The Green Machine, our two-person folding kayak, has had her skin rejuvenated. Old patches that were peeling away have been replaced, and her seams have been fully sealed using Hypalon glue and FixSeal MSP15 sealant. In addition, as mentioned last time, we have replaced all our standard definition video equipment with new HD cameras, including two GoPro Blacks to capture wild weather, U/W, and hopefully fantastic aerial footage when attached to the parafoil kites we also purchased.

THE SAILING CHANNEL
It’s instantaneous and more cost effective, so we are delighted to announce that Jack and Jude have entered into a joint venture with The Sailing Channel to provide our Australia Sailing Adventure DVDs for download online from anywhere in the world. It will take about a month to get all the bits sorted, and when it’s up and running I’ll post some links. 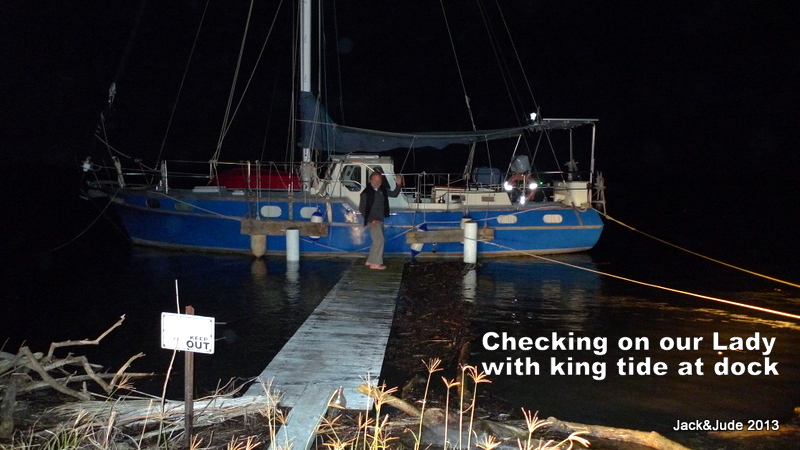 OFF THE DOCK
We’ve been watching the weather for weeks and after the blow that kept us in port, it’s been rather lacklustre. A wishy-washy band of mild pressure has kept us guessing. Then all of a sudden favourable winds were forecast to arrive in two days. Go, go, go. Up early to do last chores packing up the house then we ran helter-skelter back and forth to fill up Banyandah with another tonne of fresh food, our clothes, more spares, and of course the Green Machine. As if that wasn’t enough humping stuff, my first task onboard was to climb the mast. Safety harness on, climbing into our bosun’s chair, I switch on the helmet Gopro camera then climbed 50’ to checkout our rigging and repair what those damn White Cockatoos had eaten or bent. The VHF antenna was easy to straighten, but those buggers love grabbing our windsock with their claws and then try to fly off with it. So I had to rebuild it aloft. I also found those pesky critters started nibbling our spreader light cabling, so I had to fix that too. But, far more important, our standing rig looked great. Let’s go! 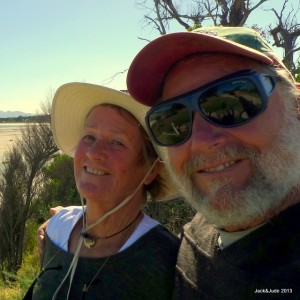 DECLARATION OF LOVE
I am a most fortunate man to be married to a lady that loves adventure and wild places. She cooks, she stands the dogwatch, and she loves driving Banyandah no matter the conditions except she prefers I pilot us alongside. It’s a perfect match. Cap’n Jack, the man who prefers the less complicated life alone with Earth and her creatures, and Jude, a lady of amazing strengths. Somehow we fill the needs of the other, and compensate for the other’s shortcomings.

GOOD NEWS
Today our river bar was reported as passable with caution, a two-metre swell occasionally breaking on the outer sandbank. That said, this evening the fishing fleet went outside for the first time in a week. Early tomorrow morning they expect to be able to get in, which means we should be able to get out. And then the two of us will begin a journey to the deepest depths of Nature. If all goes well and we get moderately kind weather, we will be out of touch for a month. Wish us luck…….PS: We’re away!! Uneasy night, brought a grey rainy morn with 20 knots SSE, but the bar was not too bad. See ya! 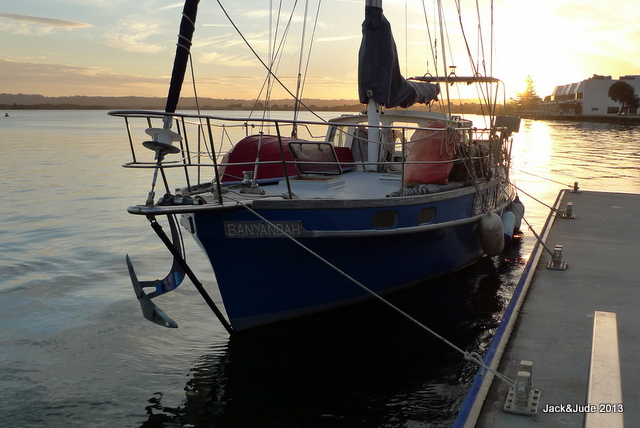