The Tujays, Jack and Jude are caught in a whirlwind of boat work and family events that has us struggling to be ready for sea in less than two weeks! What’s our hurry you might wonder? We’ve only been home just over a month.

Our first weekend ashore, Jude’s sixty-eighth birthday party rocked our riverside village with many friends and a growing family taking the ferry ride to River Drive. Nature gave us a sparkling day. ‘The first in quite a few months’ – ‘ninety wet days in a row,’ stated our neighbour from a pensive stance after we bragged about our brilliantly hot Tasmanian summer. Northern NSW being exceptionally boggy made climate change a hot topic that day. 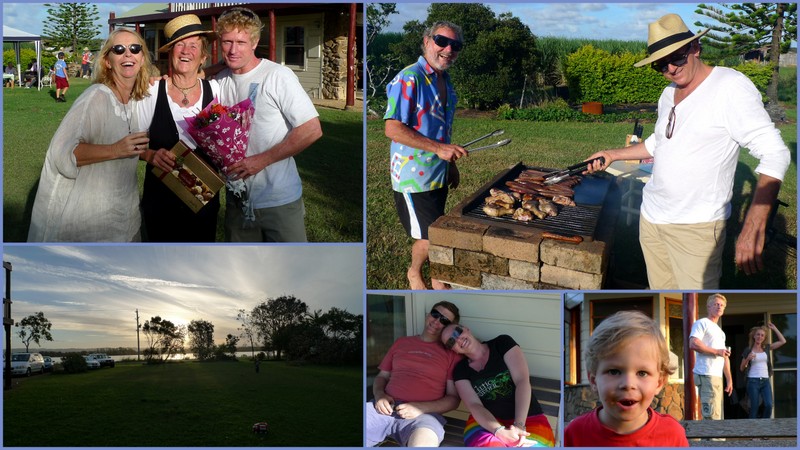 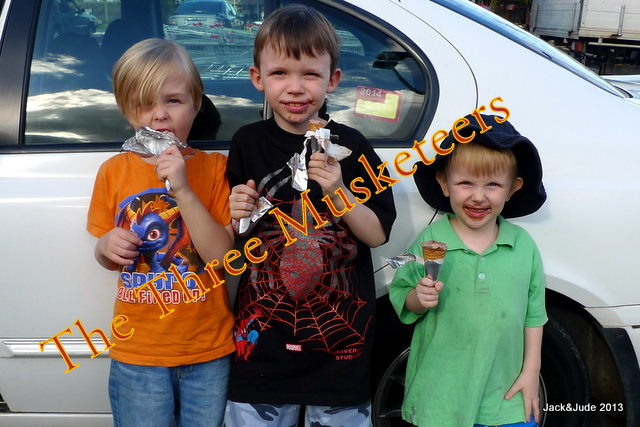 Later that first week, we swapped hats becoming Nanni and Poppi, taking the Three Musketeers bush camping for a few nights. Just four, five and seven, our grandsons excelled, tramping 4 km each way to see what we think is the purest waterfall in Australia. Sourced from the highest heaths near Glen Innes, Duffer Falls cascades through several pools to fall into virgin Aussie rainforest that stretches far beyond the Timbarra Valley. To be a clan with the boys at the spectacle and hear cries of ‘awesome’ was especially rewarding for us.

Aren’t the youth so much fun, and so filled with what’s important in life. Their wonder and curiosity when we become explorers makes Nanni and Poppi feel like kids again, and that bond creates a conduit down which knowledge flows. We camped two nights in pup tents nested close together, ready to awake to any change or black night nature call. There’s always one, or two. 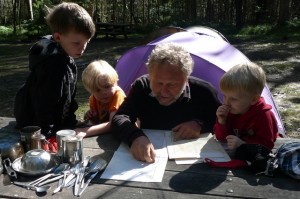 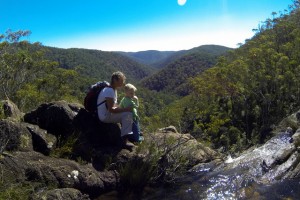 At the start of week two, Jack and Jude knuckled down to the hard yakka of preparing our ship for an extended cruise to explore the Coral Sea once again. This time focusing on ecological and physical changes since Banyandah last crisscrossed that huge 150,000 square kilometre expanse of the south-western Pacific that runs to the northeastern Australian continental shelf. Anything east beyond the Great Barrier Reef can be regarded as the Coral Sea and it is here that great pinnacles rise from the ocean depths to form subsea mountains. Those that reach the surface form the base of huge atolls and reefs such as the Saumarez Reef complex, 375 kilometres off Gladstone, and huge Flinders Reef that’s over fifty kilometres across, and Osprey Reef, a superb atoll visited by dive boats, 27 km long, 4 km wide, 175 kilometres north-east of Lizard Island and 115 km off the Great Barrier Reef.

With our sons on board in the 70s and 80s, we stopped at most of the Coral Sea cays that are such beacons for wild creatures and wrecks. Including Australia’s furthest one, Mellish Reef with Herald’s Beacon, a low sand islet, with or without vegetation depending on when the last cyclone passed over. Our first time there we walked upon scrubby grass carefully avoiding many thousands of nesting Noddies. Another time, a month after a cyclone, we made the first footprints on unbroken, washed-over sand, this time stepping between thousands of mature gannets with broken necks, accompanied by battalions of feasting hermit crabs arriving through tunnels.

This is dangerous country. Miss your grip and the next stop could be oblivion. My outboard once karked it at Mellish, 500 NM offshore. Everyone being down below left me alone and rowing against reinforced trades. It’s always tough rowing against slop and eventually my hands went numb. And still there was no one on deck. My anger got me home, that and a huge desire to stay alive a bit longer. If there’s anyone out there wanting a bit of adventure and doesn’t mind wind, be grand to hear from other vessels planning a similar voyage.

Re-filling the lockers with food, goodies, and spares is an ongoing task to which we have added a long list of new equipment. We’re updating and replacing our worn video gear, and changing format to HD. It’s a giant leap in gear and post processing that’s requiring a steep learning curve. But, that’s cool. It’s another new project to keep our grey cells stimulated and will be fun. We bought a robust, yet handy Canon HF G10 which has a whizz bang lens and huge optical sensor recording on 32 gb of internal flash, and/or twin SD cards.

To capture U/W and stormy action we’ve added a second Gopro HD3 thinking you only live once, why not record it. And if we can work out how to rig it, onboard we have a 7 m long telescopic extension pole. We’d love to have half jut out over the side with a Gopro catching us sailing sweetly along; the other half, likewise on the kayak. That’s the plan, but like so many, more work is required. 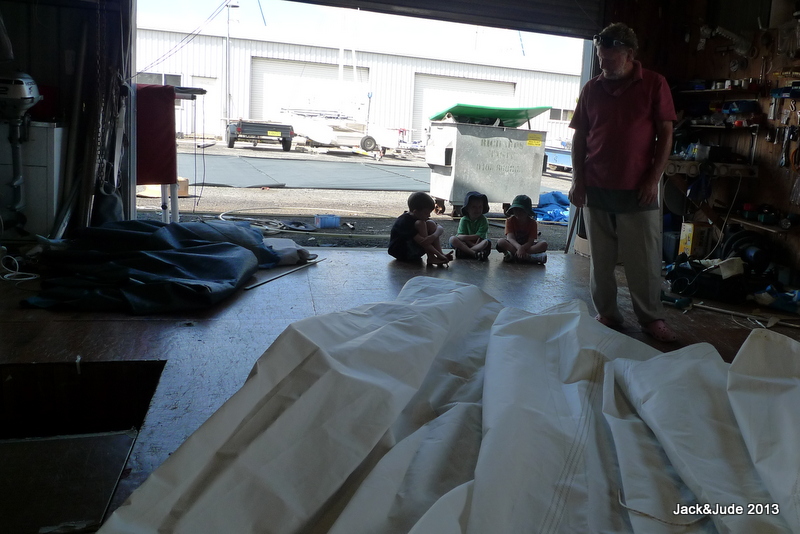 Making a short detour when taking the kids camping saw our Mainsail from Hell deposited with Scooter Sails in Yamba – who after a quick look questioned the wisdom of investing more money in such a poorly made sail. Our lack of time, and funds committed elsewhere, prevents us from ordering a spanking new one, so we said let’s get down to strengthening this one. After a through examination, we agreed when Scooter suggested increasing the size of all patches and adding webbing through all cringles to distribute the load over the larger patch. The luff rope will be stretched and secured at reef points and leach line controls added at each reef point. These repairs have added a third more cost to the sail, but it’s like fixing up a sick friend. And maybe now it’ll get us around Australia. But tell you what, when the wind gusts hit screech level, hopefully we’ll not be expecting an explosion. 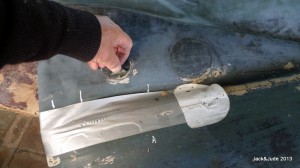 The Green Machine, our two person kayak, broke a couple of its folding joints, requiring a rebuild by sheathing with epoxy and dynal. The kayak’s outer skin will also benefit from some attention to seal leaks along its seams and one bad puncture. Would you believe, we’ve stayed afloat thanks to liquid nails. But now that we’ve found the proper repair gear, even thought it’s expensive and needs being done just so, we’ll not baulk at a few hundred dollars for materials to have a leak free Green Machine. Working on that sleek devil always brings images of us paddling across a remote lagoon towards a wreck site or just wandering about, doing a bit of fishing. And that sure helps keep us motivated.

We have charted a route from Ballina direct to Cato Reef and then onto Wreck, where walking the cay upon which Matthew Flinders took refuge will be inspirational. If the weather gods permit, a dive over the remains of HMS Propose and HMS Cato would be a life experience never forgotten, but finding a calm enough day at the height of the trades will be the trick. 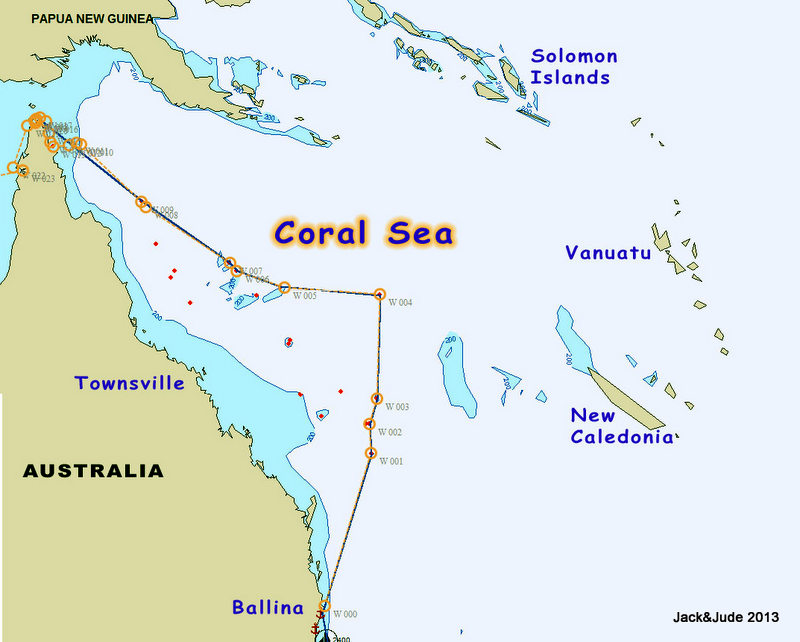 To better secure Banyandah exposed to seas breaking over the reef at high tide and when behind scant protection we are switching to a new anchor made by Manson. Our forty-year-old 45 lbs CQR will be retired under the cabin sole. Its place taken on our bows by “The Boss” – Manson’s latest creation. And we are very much looking forward to reporting how it digs fast and sticks in all Australian conditions.

Ciao for now. We’ll post a heads up just before we sail.
Physical books and DVDs will not be available for about a month once we sail.