It’s great to be back at work. A squall’s just hit. It’s dawn, and a Sunday. Blast! Big ones from the only direction open to long fetch, so Banyandah’s irritated and bobbing about, and I’m wondering, hoping, praying we’ll not have to shift. Not now. It’s raining. And down here in Tasmania, rain’s got a real edge. A cold keen edge that makes you wonder what the heck you’re doing here? Yeah, it’s great to be back at work. 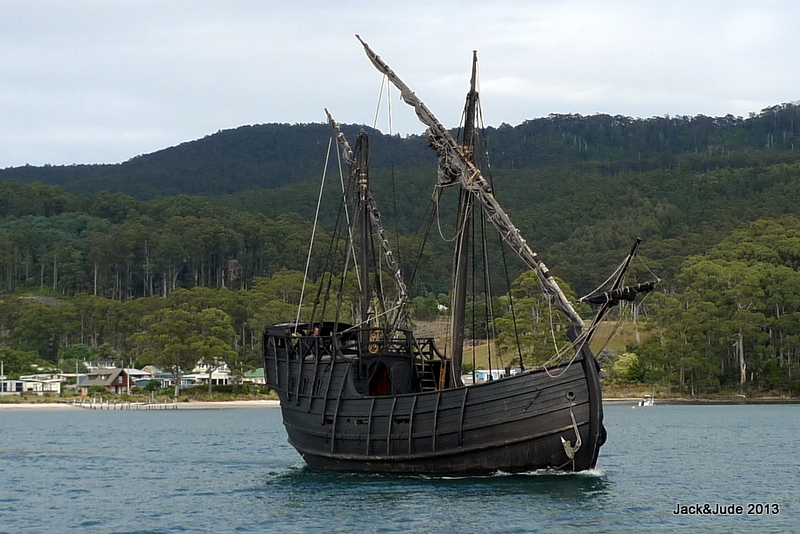 Straight after splash our guard went up. The old sailor protective thing just came over us and we eagle eyed every approaching craft, game plans forming in our heads. Sheesh! Why does everyone want to pass so close, why do they need to park right on top of us.

But it’s not all been like this. Jude and I got off the Kettering Welcome Dock after two days of sorting ourselves out, packing away more mountains of food, checking that more systems still work, but still managing a couple of nice dinners with new friends.

To get out of there we had to drive hard against our spring-line to jack our bum off the dock against the onshore wind. Then we gave her full blast astern. We had less than a dinghy length behind us to a chunky boat and even less to one worth more than our house in front. Not exactly the elegant departure imagined. But once free we hightailed it straight across The Channel to the first empty bay where we plonked down our hook right in the middle. Phew! Just had to sit and take it all in! Wow, we’re afloat. No neighbours in sight. No noise. Just a great view around a sunburnt landscape that might have had trees in some distant past.

Straightaway two fishing lines went over the side, and eagerly we waited, and waited. All afternoon we waited. When the lowering sun turned those grassy hills golden yellow, Jude opened her magic box and whipped up a veggie delight, but neither of us had the hoped for fresh fish. 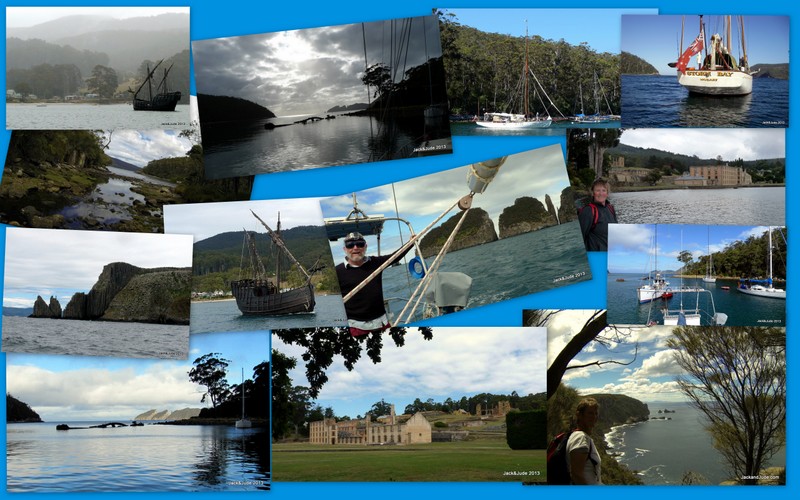 For three days we hid out like Butch Cassidy in the Hole in the Wall. Can you blame us after eight weeks of slogging our guts out doing acrobatic feats, balancing while sanding and painting. First night, slept like angels, every nerve ending connected to heaven. Awoke wanting some adventure so we launched the Green Machine and off we went for a paddle. God, it felt great. There’s something about touring vacant bays surrounded by open hills in one of these low-slung craft. We stopped when we liked. Took heaps of photos. Nothing overly fantastic. But why not? With digital you can push the button all you like, recording memories that might only last until deleted.

That first weekend it started getting crowded. Australia Day. Plenty of boats, all sizes and shapes clad in blue Aussie flags, along with a fair swag of speedy boats towing kids yelping as their wake rocked our boat. So we joined them, jumping back into our Green Machine to paddle around the fleet.

Met a Kiwi varnishing his hatch, getting spruced up for the Wooden Boat Show. Nattered for an hour until he realized his brush had gone stiff. Another lot were swimming! Imagine that. When asked if they were numb, they laughed. So we jumped in. Later an old codger was doing push pull exercises at the back of his boat, so we gave him a cooee. Seems he’d lived in that out of the way bay for nearly ten years and knew everything and everyone plus a whole bunch of the history.

When the crowd went back to work, we set sail across Storm Bay for Port Arthur, putting the Mainsail from Hell up in earnest for the first time. Not much of a test. More a drifter than gunwales under. But still we gaped at its ridiculously tiny tack cringle that’ll probably let go first blow. Crikey, that New York sailmaker must sail on a different planet.

Port Arthur has a very special aura starting right at the towering rock pillars of Cape Raoul and gets even better once past Arthur Point where a lonely bay with wind swept sand towering into slopes any kid would love came into sight. Seemed a good place to snag a flathead, the magnificent Tasman Island right in sight, bit of swell too, but it turned out not too bad for a lunch stop.

Meanwhile the wind shifted, amply filling our headsail and sending us screaming up the narrow entry. Big blasts wetting the decks seemed a good excuse to bring out the GoPro for a few waterline pics. Taut sail flying we zoomed past the penitentiary, its ghoulish sandstone still in sight when we dropped the hook in Stinking Bay, where straightaway a lovely big squid got added to the menu.

Down here, the weather can change every hour, but we had one good night surrounded by trees like sentinels behind a white beach, then horrible nasties started attacking us straight up the channel, so we shifted into Carnarvon Bay, putting ourselves on display in front of a bunch of houses.

Now here’s a cyclone anchorage. Shallow-ish sand and mud with shell, totally surrounded by low hills with nothing to hit, except the strange black craft parked next to us. Like at the movies, we expected Captain Jack Sparrow to swing from the halyards of this 15th century Portuguese Caravel. Notorious from Geelong was on its way to the Wooden Boat Show. 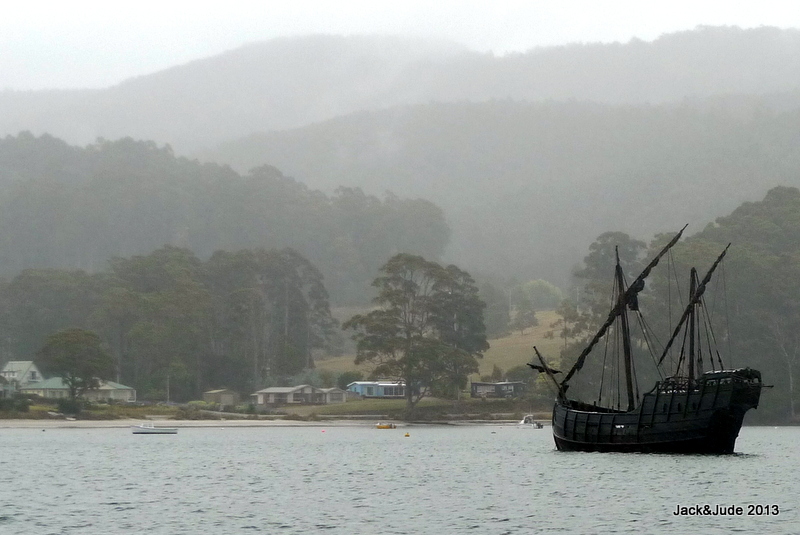 As we had some mailing to do, we took the dirt track toward Port Arthur, and had a grand stroll through forests fronting the bay until we emerged in front of the Commandants House inside the penal colony. Strolling past the four-story penitentiary, its propped up facade rather macabre, got us to the main entry building where we went out. Up the hill about a kilometre to the general store with post office where I bought my sweetheart a bite to eat.

Taking a different route home, we came across a farm advertising cherries where Jude bought some seconds for jam after chatting up the boss who probably has everything a person could desire. A magnificent property an hour from one of the nicest capital cities with good views, plenty of trees, a batch of broody chooks with one lame, worn out rooster, and a couple of cute grandkids screaming round on Peewees.

We pulled the pick out Carnarvon Bay with a morning westerly giving us a sail away start. Outside was heaven. It’s as if the creator put those magnificent dolerite cliffs there to inspire us mortals to think big. Or so we thought as we drifted along, our sails barely filled and our lady acting as if she knew the way around one of Tasmania’s iconic landmarks. Ahead, flat-topped Tasman Island fell vertically into blue depths with shrouds of bronzed dolerite columns that must have been individually chiselled during the creation. 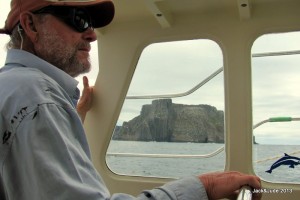 Rounding that point our dreams got shattered by wouldn’t you know, a headwind. Yep, straight on the nose. Our old iron topsail got some use as we slowly motor sailed towards more of that fantastic landscape with names like the Candlestick, Totem Pole, and Lanterns, two blobs jutting out into the grey ocean with a really slender rock column that has you watching for it to topple. The Totem Pole, a 65 metre high column of dolerite rock, stands in a deep, shady, chasm between the first of the Lanterns and Cape Hauy headland. At the far entrance to the same chasm, The Candlestick is thicker, a shorter chunk of dolerite.

As we approached, the wind backed, giving us the thrill of full sail working the mark, checking depth, just scraping past, cameras clicking, me dancing about, GoPro stuck on my head. Once clear, we eased sheets and sped into Fortesque Bay. 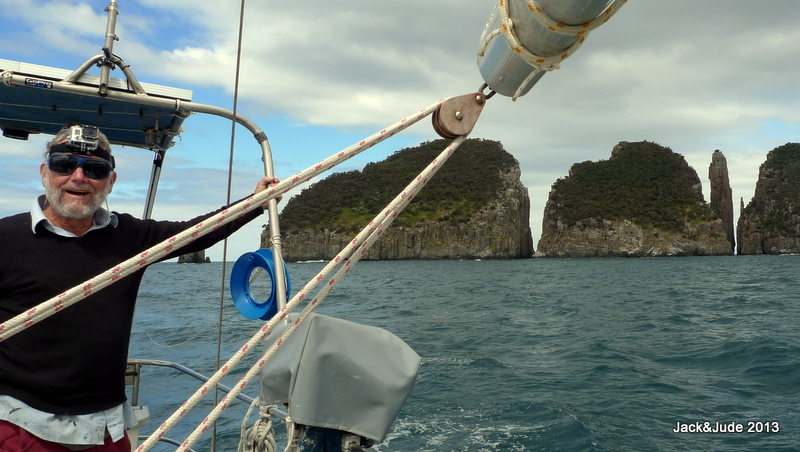 Swell can sneak into this east facing bay, so we sailed straight towards Canoe Bay in its NW corner. Protected by the hulk of the William Pitt, a steamship sunk to form a breakwater in 1953, it’s shallow in there, but enough for a metre under Banyandah with tall trees on three sides and magnificent Cape Hauy out front. 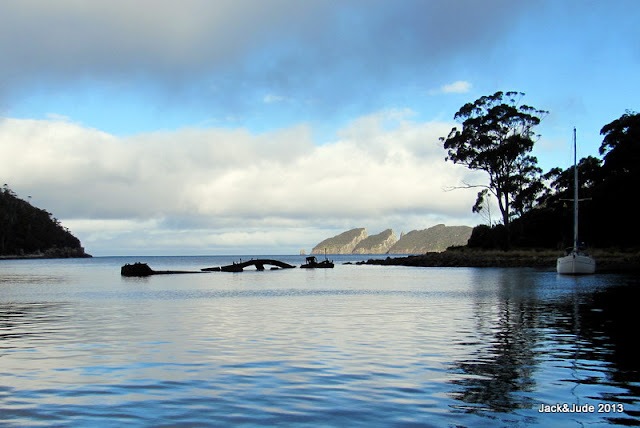 The next four days were what cruising is all about. Nothing gets to you in Canoe Bay. The wind-willies fly over top. Our biggest worry – other boats. A flotilla came. All going to the boat show in Hobart. Storm Bay came in. Now she’s a classic. Timmy, Australia’s premier wooden boat builder, made us very welcome showing us over his pride that he restored, a 1925 Huon Pine topsail gaffer with the longest boom ever seen that worked hard most of her life. Another night we shared a few brews with long time locals who complained about the loss of fish, and the fact that even the sea is changing. The bull kelp is nearly gone, affected by the invading hot East Australian Current. Did Man’s fiddling do this? You bet they proclaimed then told us this place was once called Freezer Point when Storm Bay used it as a base fishing for white fish. 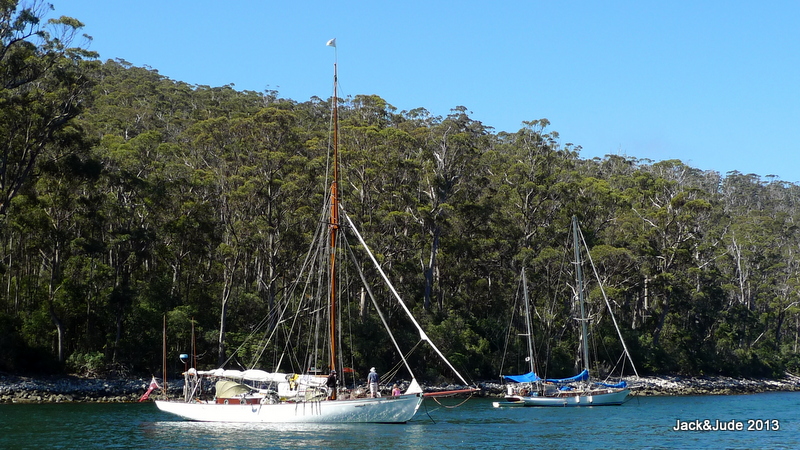 In between enjoying morning coffee with many nice boatie folk, we had one of those super glorious Tassie outings, tramping the shoreline trail through invigorating tall forests, over icy cold creeks, and up a hill that abruptly ended in a shear drop to a blue sea running to a wide curving horizon. Far below, the surf boomed and Pacific Gulls glided. A magic day, just me and my honey enjoying the good Earth abounding with her creatures, our feet dangling to eternity while playing games with a bevy of curious skinks that craned their heads and waved to us with lifted paws. 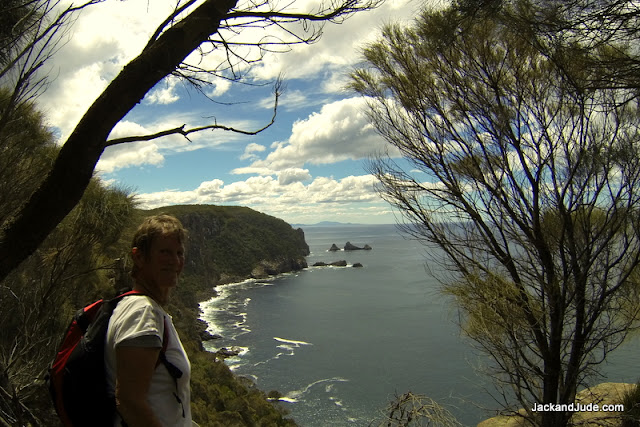 Great memories, but now we’re back at work battling those same elements. That’s Okay. Think I’ll shift us to the other side then jump back in bed with my best mate. Aye, that’s another wonderful part of our life afloat.

Till next time, be bold, be wise, and be safe on your adventures.
Jack and Jude