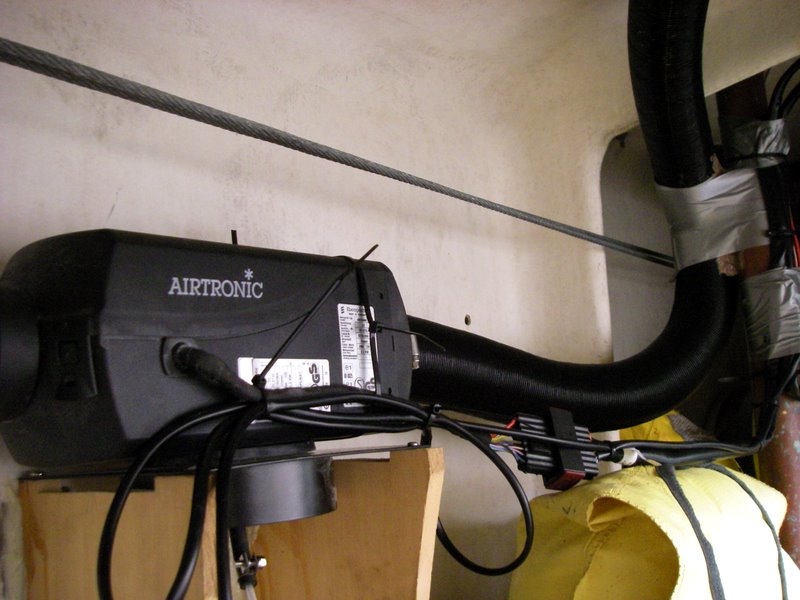 I will only whisper the word even though I want to shout it so all can hear. Yes, the darn thing is in, and its little blue light did glow when I first touched its tiny ON button. But, oh what a price! Not only the huge capital outlay. Much more than that. The five days of wiggling into cramped corners, pushing, reaching, screwing components in place, and all the while scratching my noodle worrying over which wire goes where. Yes, our new diesel boat heater has extracted a heavy price in money, sweat, and tears thinking everything might be in vain. As it’s yet to be fully tested, I’ll blow my horn with a muted toot. 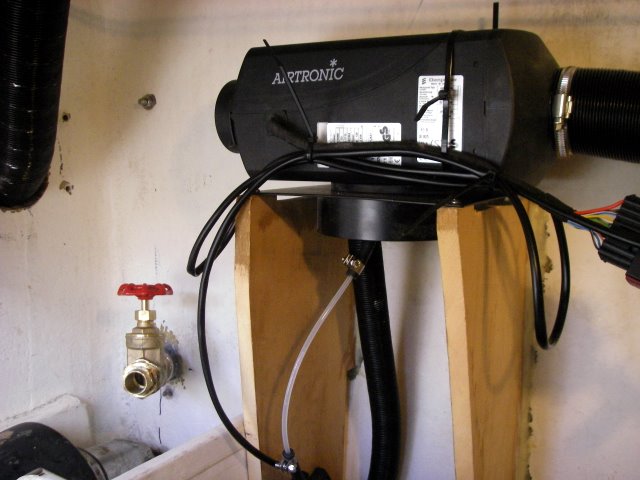 For three summers Jack and Jude have been coming to Tasmania in Banyandah. We love the island’s beauty, its easygoing atmosphere and friendly helpful folk. We like it so much that each time our visit extends will past the best weather found in January through March, right into the freezing cold of winter. The first time we weathered the biting wind tied into Constitution Dock, downtown Hobart, with a plug-in portable heater struggling to keep the wet cold out a Banyandah that was closed up like a house being fumigated. The next winter we thought we’d tough it out and struggled to stay warm in double sweaters, double track pants, using our gas oven to warm the main cabin. We still had to escape to our doona covered bed by 8PM. In winter, it gets very dark by 5PM, and that’s when the Tasmanian cold seems to invade our bones. We cruised til June anchoring in several lonely spots, before throwing in the towel, racing to a marina to plug in our electric heater.

Then we thought, “This is crazy. Why don’t we invest the big bucks in a proper boat heater and live in luxury!”

The upright Dickenson have a good reputation, highly recommended by several of our cold weather cruising friends. Simple to install, they only need a flue and fuel supply. But a flue on our open deck seemed inappropriate, and we could not find an empty spot against a bulkhead to mount it, plus it would only heat one of our two accommodation areas split by the cockpit. The much more expensive ducted heaters answered all our demands. They could be located out the way, either in the engine room or cockpit locker, and be ducted fore and aft. So we concentrated on choosing the best of that design and here our problems began. There are two major brands, Wabasto and Eberspacher, both German and so very much alike in size and outputs, it’s as if they’re made in the same factory. Both companies produce massive amounts of literature for selecting the correct model and right there the brainwork starts. By their calculations we’d needed their second larger size, but it cost a lot more than we wanted to outlay, and we argued we’d only heat one cabin at a time, therefore be reducing the volume to heat. So we selected the smallest unit and uttered the first of many prayers.

The Eberpsacher D2 produces 2200 watts of heat at full power, taking just over a 1/4 litre of diesel per hour to do that while using 34 watts of DC power to blow the warmth throughout the boat. Uninstalled, it costs about $1600 dollars here in Australia. That’s for the caravan model. The marine model costs another $800.

Please Note: We are not recommending our course of action. We managed our boat and money according to our skills and financial restraints. But this is what we did. We bought a new Eberpsacher D2, caravan model, intending to fit it ourselves, and confident we could do it properly as we’ve built several vessels, including Banyandah, and have qualifications as a marine engineer. That said, when our box of goodies arrived, I got a sinking feeling when exploring the myriad packets of bits, it plummeted upon reading the thick comprehensive manual. 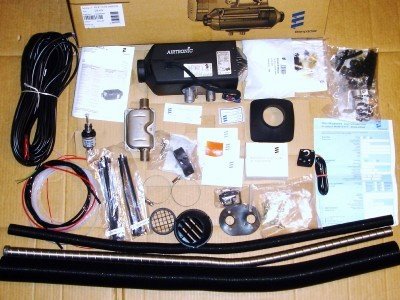 First task was deciding where to site the smallish heater measuring 200mm square by half a metre long. Ducting had to run from it through a “Y” then to both cabins. The ducting would get hot. I pulled everything out the portside cockpit locker then eased my bag of bones into it and further under the seat back to inspect the area where our steering cables run. This side was preferred as it has fuel available from the engine’s final filters on the other side of a bulkhead. But the steering cables posed an obstacle. Many hours of offering up the unit in various positions lead to only one conclusion, fitting the unit would be a Houdini act, but it could be done and be unobtrusively out the way.

So I began making timber mountings and fastened them to the hull. Sitting back after that, admiring my work, I felt pleased. I could imagine the heater pouring out warmth at the push of a button and dreamt of us being cosy in our cabin while the outside thermometer plummeted.

Next came the difficult task of where to locate the outlets for this warmth. So many factors. The ducting gets hot so must run unobstructed away from electric stuff, and there is a physical restriction on its length. I had purchased an additional three metres of ducting, the maximum the D2 can push through without overheating. Additionally, the outlets shouldn’t be near surfaces that can’t tolerate heat like varnished bulkheads and bench tops. Eventually, after hours of mentally trying several configurations, I went to sleep with snakes roaming round my head and woke with a solution that got altered as soon as I tried mounting the “Y.” From that point on, for two days I was a gymnast contorting my aging body into unbelievable cavities, cutting massively big holes through double bulkheads with basic tools. Of course Tasmania chose that moment to have a heat wave, so I sweated like a boilerman while wondering do we really need a boat heater.

The ducting in, I next took on the challenge of wiring up our monster. Gosh, the manual had ten different wiring diagrams and the wiring loom was an octopus with 5-metre long arms of multicoloured wires. Why couldn’t I just have simple red and black terminals to run wires to? Firstly there was the controller to install and run its wires, then the power harness went the other way to our switchboard, and finally the dosing pump had its share of wires. But why so many wires in each loom? Reason is this harness fits all models. Ours came with a simple controller, but a timer can be fitted, as can digital display, auxiliary mode, Easy Start, Easy Start with remote, and every combination of the above. Adding greatly to my woes, the loom came with hugely long wires to fit every size of vehicle, and they had to be cut and connectors made up. Each wire must go in the exact right spot, or phut! Our total investment literally up in smoke. It was somewhere while rereading the manual trying to figure which wires were needed that I read the warranty will be void unless installed by a company authorized by the manufacturer. My sinking feeling got much worse.

Well, yesterday this ongoing saga came to an end. The last connector was made up and connected, a branch from our fuel line was created and run to the dosing pump, and a final check made. I washed my hands, sat down with a cuppa and mentally went through the installation thinking of what might have been forgotten. Receiving an encouraging peck on my cheek from Jude, I put the two fuses into their holder, and uttered a silent prayer as I flicked the isolation switch. Maybe I was dulled by the heat and exhaustion, but I felt nothing when the amp meter didn’t flicker one iota. No phut either, no smoke rising from the wiring, so I took that as a good omen, held my breath and pushed the “ventilate” button on the controller. It supposedly runs just the fan for air circulation. Again, maybe I was brain dead, but when the little blue light glowed, I felt nothing. Only when I heard the unit come alive with a whirling sound did I jump to the locker to witness the miracle. Suddenly, air began pouring out our two outlets, much more than expected. I smiled. Jude jumped and embraced me. Then together we pushed the “Heat” button. After a deadly long wait, more magic happened. The dosing pump started to click, followed by a quiet whooshing sound of the burner igniting. In a few moments, luscious warmth blew out the outlets. Success! Now let’s pray it keeps working through winter.