Banyandah lies alongside Warners Landing, and by 11:00 we’d packed the Green Machine with our wilderness camp, safety gear, and bush-walking garb, every cranny tightly packed. Then when the bladders were inflated, she looked bloated. And when hoisted on the halyard winch, it groaned and Jude winced when she had to put some serious effort into raising that fat sausage over our railing. 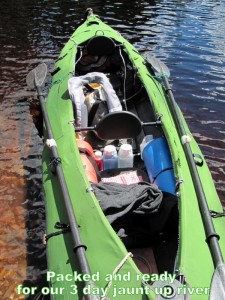 Amazingly, once in the water, it turned back into a princess, floating high; and even with us in, paddled just as easily. Past the swirling waters around Big Eddy, the current only slowly against us, our arms feeling stronger with no ill effects from our twelve km recon paddle the day before. We made record time back to Pyramid Island.

This time we enjoyed a full hour lunch break on Pyramid before setting off into new territory, with me feeling antsy. Three years earlier, in a dinghy and outboard we’d managed only a few hundred metres past the confluence with the Franklin before a savage set of rapids had turned us back. Rounding the dreaded corner this time, under bright sky and hot sun we found the rapids calm as a millpond, just two or three lumpy rocks mid-stream, the Gordon idle. I need not have worried.

But soon came our first serious hurdle in the shape of a shingle bed with a fast flowing chute down its left side, against a bank jammed with giant logs. Feeling vigorous we counted cadence, stroking hard, then faster to enter the rushing stream, and for moments we rode forward slipping past the shingle bed. But then our delight vanished. A side flow slugged us, our strokes powerless against such a force. In a scary second, a log loomed alongside and we slammed broadside into it. In that instant both Jude and I wondered if we’d flip. But the kayak stayed upright, pressed against the log by the fast flow, water rushing under us as if parked on sabbatical in Nature’s paradise. Phew!!

Unfortunately my quick look round revealed us in quite a pickle. Sliding backwards to the slower flowing water wasn’t possible; the tree’s root ball blocked that. And going against the flow, a litany of other fallen trees lay in mayhem against the abrupt riverbank. Jude, noticeably nervous and thinking aloud, fired off ideas. But as we were in no immediate danger, merely stuck, over some minutes we discussed a plan requiring Jude to leave the kayak.

With the rope painter she scrambled along the log to the bank then under and over other logs, breaking off branches, clearing a path for the painter. Finally she pulled our craft forward while I fended off obstructions. She is splendid under difficult conditions and in three or four movements, working together we got the Green Machine clear of the logs into slower water and shallow enough for Jude to clamour back on board. Then we set off at a fiery pace to ensure we weren’t sucked back into the maelstrom. 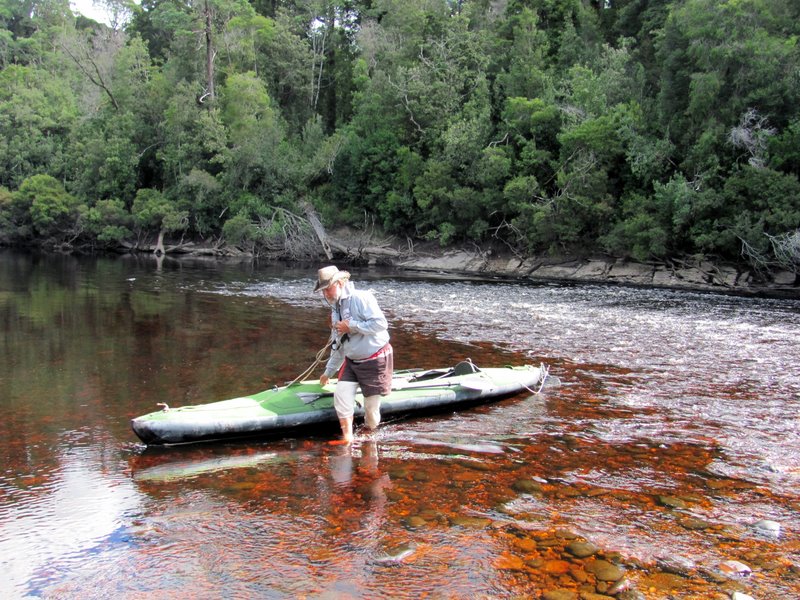 Around the next bend awaited another shingle bed and fast chute. This time we opted to get out in the shallows and wade our kayak up the side. That was mildly dangerous, the rocks polished, coated with slippery slime, and bending, pulling our laden craft against the fast current was unbalancing and hard on our backs. Successful though, and we used this technique in all but two of the following eight shingle beds and rapids. Through the other two, by fast paddling against a weak flow we made it up the chute.

Meanwhile, the Gordon is becoming narrower, running faster, the terrain becoming flatter, sometimes pierced by an occasional slab wall of grey limestone. A few were pock marked, others had caves, one had a tremendous overhang like the prow of a liner. Soon after leaving Banyandah we had encountered a family of black cockatoos with yellow splotches on their tails, but near the rock walls sleek swifts swooped and swirled above the river, catching insects. Our hours of padding went quickly, filled with awesome scenery and rapids that had to be conquered. Only once did we stop, to search for Griners Camp. But alas the co-ordinates we had made no sense on our GPS and not wanting to change into full bush gear, we only mildly entered the thick forest before electing to carry on upstream. 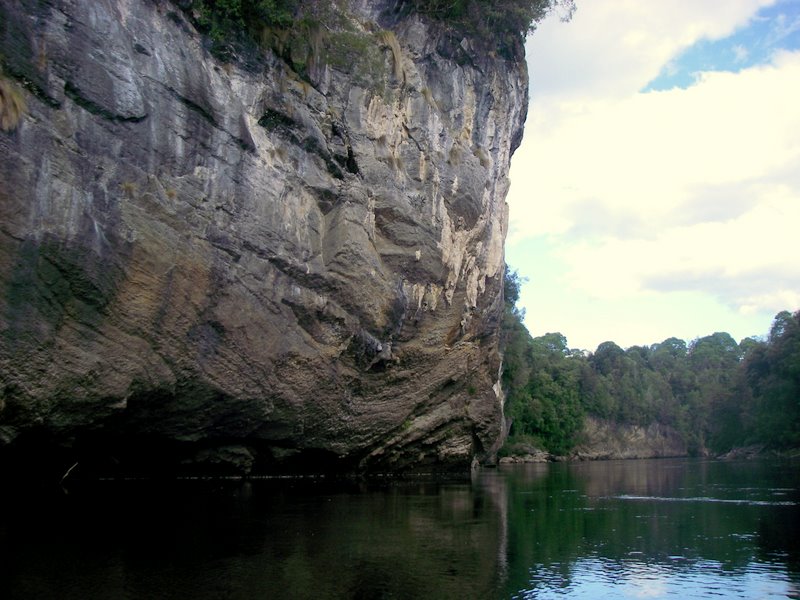 We paddled past what appeared a perfect beach camping site, it then 5 o’clock and the air losing its warmth, the chill felt in the lengthening shadows. We pressed on, rounding another bend, spying more allure ahead and another shingle bed. Campsite forgotten, two more shingle beds were tackled one after the other. After walking round them, a long calm stretch ended in the biggest obstacle yet. Facing white rapids churning over a bed of boulders with no deep water in sight, suddenly, we were bone tired. 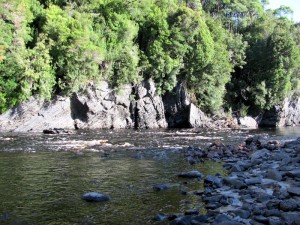 A tall wall of grey stone formed the left side but immediately before that, on the right bank, ran a stretch of firm white sand too enticing to resist. High up, a flattish spot big enough for our tent. Its other 200 metres gently sloped, littered here and there with driftwood. Looking at the white rapids then around to the shore, we stroked in to make camp.

We had to clear a few rock lumps from the shallows to unload the Green Machine before lifting her in mincing steps up the bank. After changing into warm dry clothes I erected the tent while Jude set up her kitchen, making a central eating area where two logs crossed. In no time at all a small fire was warming us while the roar of the rapids filled our camp. 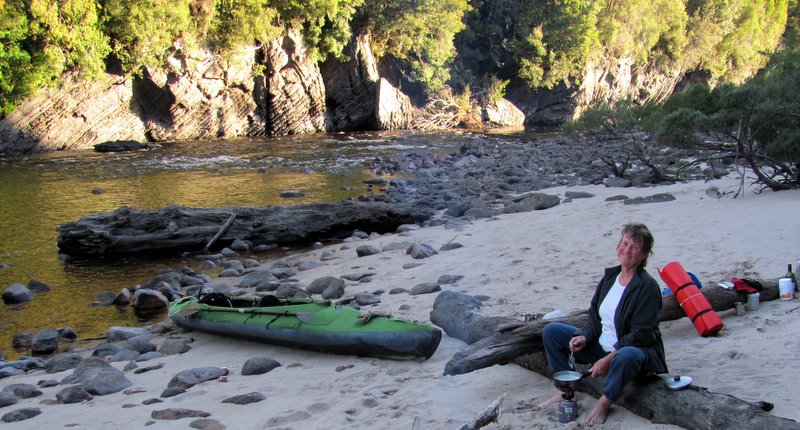 Directly upstream the river had a boulder shoulder on our side, and in the morning, instead of facing the rapids, we thought to first explore as far as we could by foot. In truth, we weren’t too sure of where we were. The 1987 survey co-ordinates were still proving too unreliable. Sometimes they’d be close to an object we’d find, at other times, way out, or else would lead to areas well away from the river, and sometimes its description did not correlate with the terrain we’d find. Over all, the data was little more than useless, therefore the location of the Sprent River camps could be anywhere, and we could be anywhere from metres to miles from them.