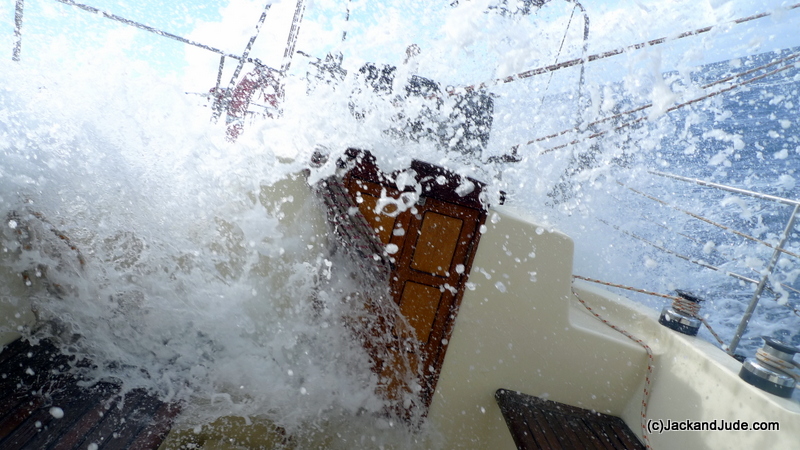 The need to be in Tasmania came in a dream while in our non-rocking, dry land bed, as a vision of launching our third book, “Reflections” at Tasmania’s Wooden Boat Festival. ‘What a blast’, Jude said the next morning when I laid out my idea. At the time, she and I were pounding nails, fixing up our wood and stone house and building a new steel shed. Straightaway we decided to get our fourteen year old life raft surveyed. It hadn’t been opened since tackling the Southern Ocean four years earlier and crossing Bass Strait without it in survey just didn’t seem wise.

Thanks heaps to Colin and John at the GIYC, and Peter at Pacific Australia, Adelaide for taking care of that. What a brilliant fraternity the boating world is; each helping the other. 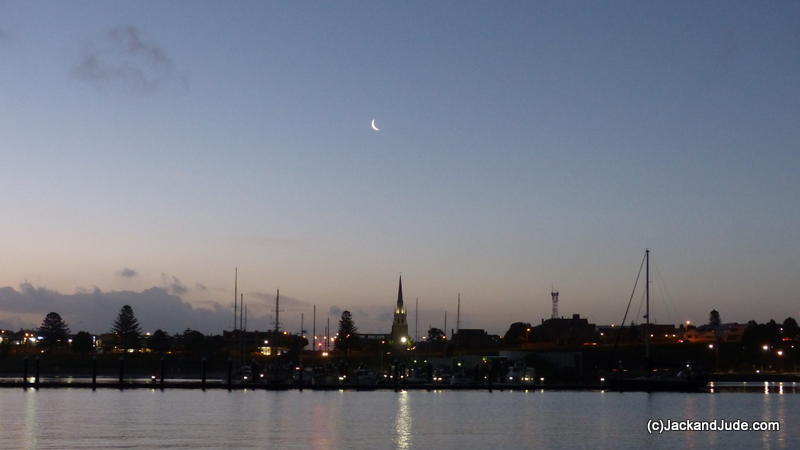 Our voyage away from Portland on the mainland, bound for west coast Tassie began with faint hearts and tender feet, all sails flying, chasing a nor-westerly with staysail poled to weather, full main and genoa sheeted easy on the lee. Forecasts for the next few days were for that northwest wind to turn to strong, even gale force westerly then ease a bit when swinging to the southwest. We wanted to be at Hell’s Gate by that time. Well! That was the plan. Strong headwinds were forecast for the following week, so it was go then or not at all.

By midday the shipping lanes were behind us and open water lay ahead inviting us to dream as we kept an eye on storm clouds building on the western horizon. However, sooner than expected a chilly blast heeled our lady to an alarming angle and sped us into action. Crikey, already the mainsail quickly got smaller. We knew the weather would only get worse, so down to number two reef without pulling in number one. Goodbye to that lovely lazy pace as suddenly the miles began ticking off while the sun sank into those menacing clouds getting nearer. 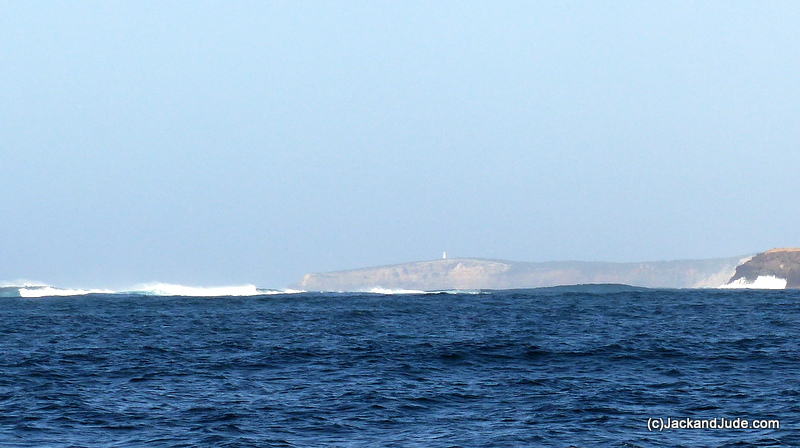 The first black clouds struck with sickening squalls, Jude already tucked up in a rollie bed, the cold raindrops raising the tempo demanding I assist Sir Aries at the helm. Relentlessly the squalls clobbered us, the wind at 30 knots, the sea a mishmash of confusion with Banyandah thrashed by wave tops thrown on board by the gusts, and each lull raising hopes of a steady breeze. The kind of weather every sailor hates.

Since leaving Adelaide two weeks ago, we have suffered a cyclonic blow and several frontal blasts. Quite unusual for summer. But we can’t complain. The westerly flow has been better for us than summer’s easterly breezes. Unfortunately though, those low depressions have been taking a more wintry track, bringing with them much bigger seas and swell. There lies the danger. Not the wind, it’s the sea that breaks boats and hurts people.

In planning this voyage and seeing that a cold front would pass over us, anticipating the wind change we had set off on a southerly course, thirty degrees off the rhumb line, and so we had gained twenty miles of westing by the time the change arrived.

The next band of menacing blackness didn’t bring much extra wind, just thick drizzle and that wind change. Still sailing the same sail plan our course line started heading towards King Island, and instead of braving the dark rainy night to de-pole the staysail, I procrastinated over whether to wake my mate or wait two hours for midnight’s change of watch while watching our gain evaporate.

When eight bells signalled my turn in bed, Jude got up to deck lights blazing and complaining of not having had any sleep in a rollie bed. Then I’m scampering round the pitching foredeck just in undies storing the staysail pole and clearing lines, a light jacket my only protection from a wetting. Providence kept me safe and dry for I slipped into our sea berth with just freezing legs and cramping hands. Peace lasted but a few short minutes.

On the other side of that cold front, the anticyclone was bunching the isobars closer together bringing increasingly gusty winds from the west that would turn more south as the High moved closer. Under half reduced headsail, staysail, and double reef main, the wind now on our beam, we’re pounding along parallel to the swell, crashing, swaying, and yawing over the wave tops our sleeping cabin a mad cacophony of noises. Did I sleep? Not a wink. In hindsight, I should have gotten up, put on my wet clobber and further reduced sail, but I was so warm I lay there waiting for dawn.

The west wind gusting past gale force chucked green water over our lady most of that night. Jude copped heaps on her watch and at first light looked a bit weary as we put in number three reef after fully furling the headsail. Wow! Our veteran lady righted herself, and she stopped pounding and trying to round up. Green seas still watered our decks, but below, peace prevailed while Sir Aries again regained full control. A note here, reducing sail lost little speed.

When setting off from Adelaide, utmost in our thoughts was the fact that we’d not sailed for more than six months, and knowing how easy it is to become injured in heavy seas, we concentrated on moving safely about our ship and getting all the rest we could muster. On this passage we hot bedded a lot, seeing little of each other except for thirty minutes at the change of watch. And while we did not sleep we got rest, probably lots of those micro sleeps the boffins talk about where the mind is ticking over and you feel awake, but for a few seconds everything shuts down so you regain a bit of sense that makes you less accident prone.

Sunday was supposed to be a better day, but seems someone forgot to tell the weather gods because it just kept blowing near gale. And while the wind howled all Sunday, Cape Grim slid past forty miles off our beam and a new worry entered our heads. If the wind should shift southwest could we keep enough westing to lay Hell’s Gate? Or would we have to come about and run back for King Island? That thought went round ‘n round my head as I lay prone on Sunday arvo. I finally put a stop to it by calculating wind angle and course, over and over again.

Glory be! As the first moments of Australia Day chimed on our ship’s clock, the wind started taking a holiday with longer spells between blasts and began easing a little bit. Then the seas started becoming more orderly. Oh, they were still just as big and impressive with brilliant white tops that the albatross loved to soar along, but they became more in one line.Banyandah rose up and slid down each of these, and the power of nature we so admire became the star attraction. Since we were kids, we have not found anything so impressively beautiful as a deep blue sea rolling white with giant sea birds swooping up and down on her powerful forces. 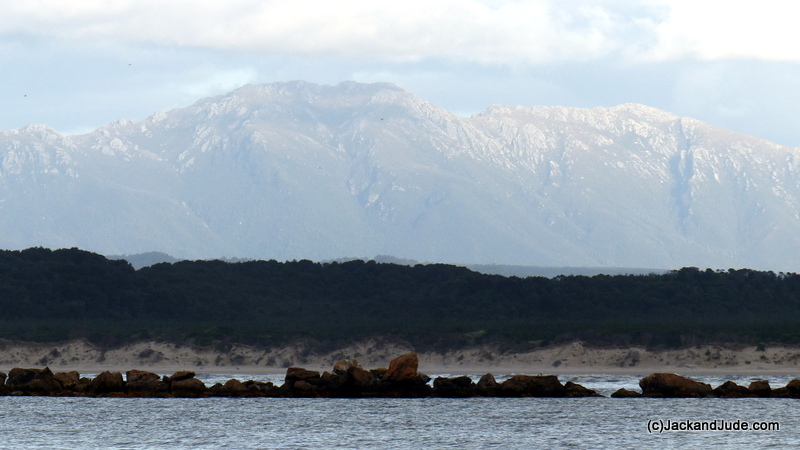 After being at sea nearly 48 hrs, Jude found some sleep just after daybreak Australia Day morning. Distant dark mountains were to our east, 50 miles remaining to Hells Gates. Every hour Jude slept, I unwound a bit more headsail. The sailing was beautiful with the wind gradually creeping forward of the beam. At eleven when Jude arose, together we raised the full main, and under full sail we closed in on Macquarie Harbour, the big swell our only concern. 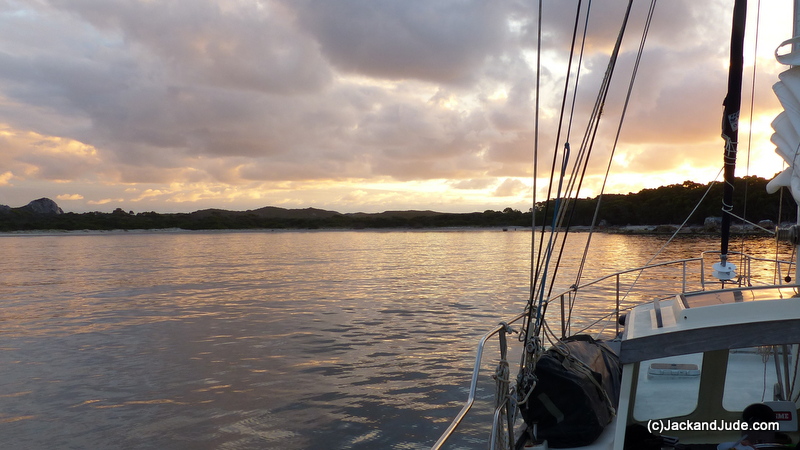 Outside Hell’s Gate is a very convenient anchorage called Pilot Bay which is protected from southwest winds, and as we found out, quiet with five metre swells running outside. And even though Hell’s Gates looked perfect for entering, we weren’t in a hurry anymore and anchored in Pilot Bay hoping to hook a couple of flathead to celebrate our special Australia Day. Then after the anchor found good bottom, and the noise and motion ceased, we looked about at the green hills and brooding mountains, humbled by the majesty of life and feeling very grateful to be Aussie sailors. 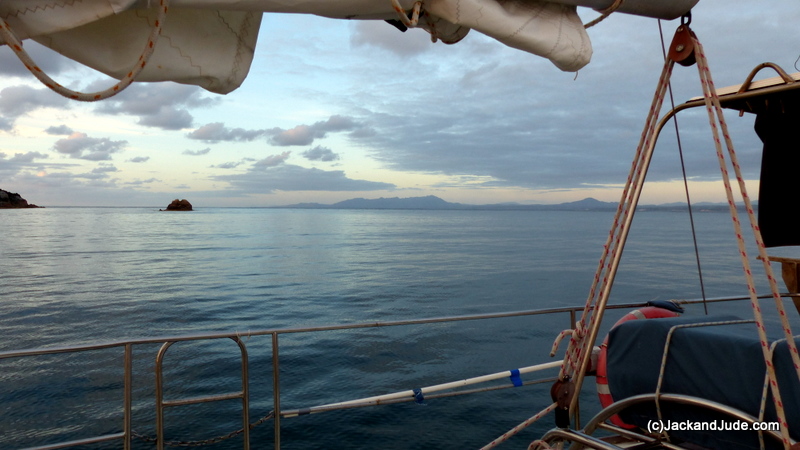 Do hope your Australia Day was as fun and rewarding as ours.