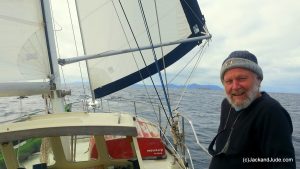 We have been so busy since rounding Southwest Cape that we’ve not had time to write a blog. This running a ship, taking in the sights, re-provisioning, handling bad weather and being social doesn’t leave much in the tank for prose. And now that we’re in such a remote location, our internet connection is mediocre, so posting this note is going to be challenging.

First off we’re now at the other end of Tasmania, tucked in behind an island that should be famous, but is not. In fact it’s little known. More on that in a moment. 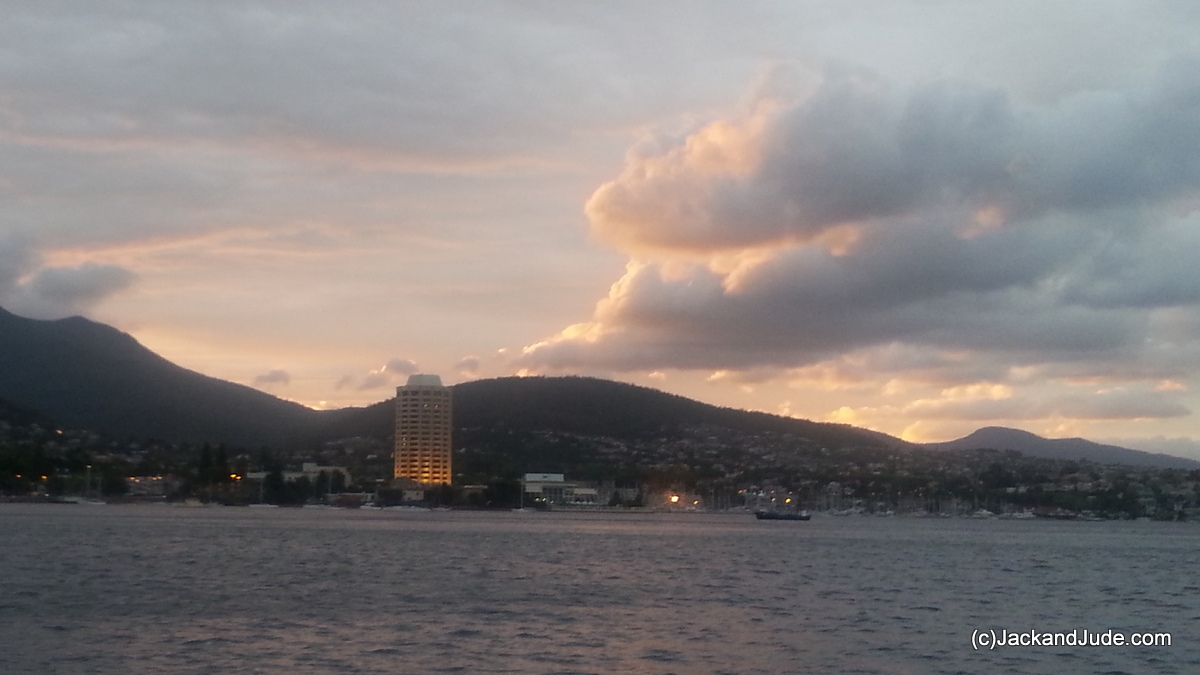 Hobart Town at base of Mount Wellighton 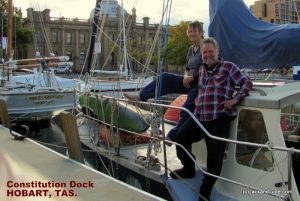 Our voyage up Tasmania’s east coast went smoothly. Through the Channel Banyandah managed to sail most of it, which delighted us. The Channel can be a bugger to sail, offering either no wind or headwinds a lot of the time. We also had a marvellous sail up the Derwent straight into Constitution Dock, where we found our favourite position next to the Pavilion vacant. Alan on Amnesia was berthed directly ahead, so we had easy company just a few short steps away, and across the opening bridge lay Pantanjali with American Michael from my town of birth with his lovely English crew Holly. With such great company and the capital city of Hobart right alongside our decks, we literally had a wowser time, dining out a lot, visiting the free museum, perusing the library almost daily, and even trudging up Mount Wellington on foot, all 1270 m into thick cold cloud before a steep descent into our mate’s backyard in Lenah Valley for a memorable celebration. 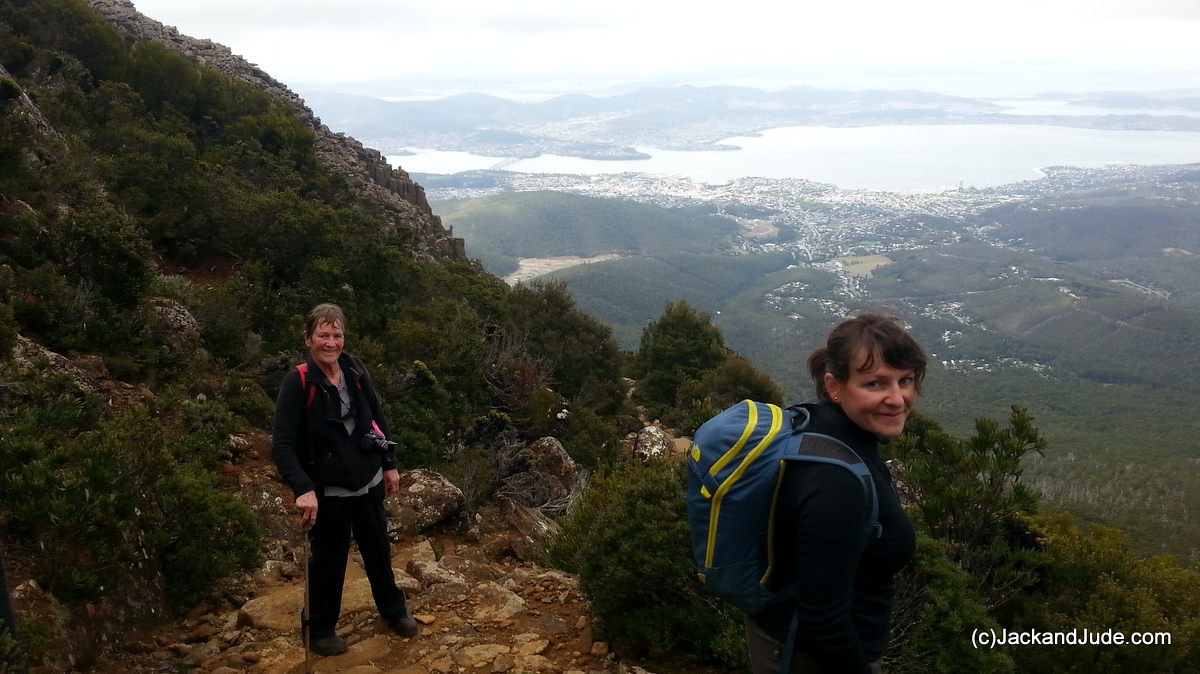 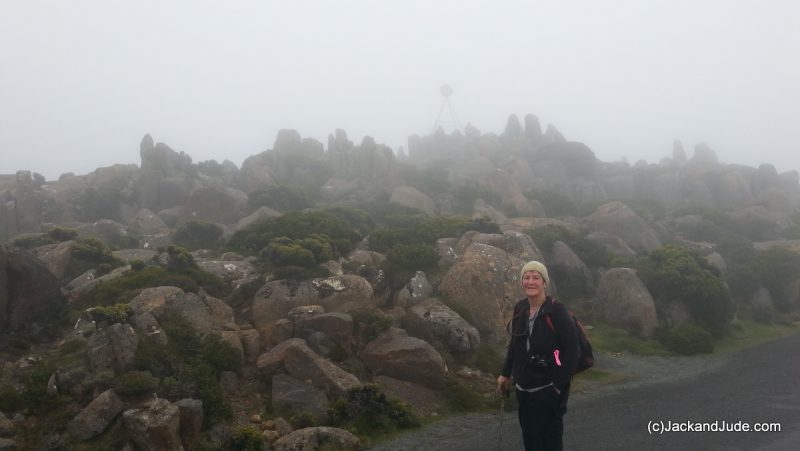 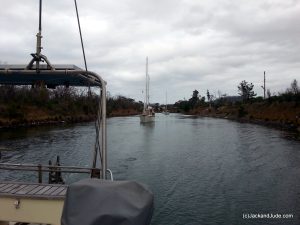 Leading the convoy through the Denison Canal

Big winds blew us out of Hobart,  30 knots gusting 35 saw us hanging onto a wild Miss B as we ran into Norfolk Bay for our first ever transit of the Denison Canal. No way would we be trying to round the Tasman Peninsula with winds of 40 gusting 45 knots at Tasman Island. In a convoy of four, the B leading the way past the swinging bridge, we had several skinny bits, but our 1.8 m draught cleared them with a minimum of 25 cm to spare at the lowest spot when at the top of a 1.25 m tide, which had us going through just as the bridge service started at 8 AM. It took about an hour to transit the canal, and exiting the other end into Marion Bay we found a very sweet favourable breeze. So instead of following Amnesia into Maria Island’s Chinaman’s Bay, we kept sailing, the whole day in fact, to a lovely and lonely anchorage at Crockett’s Bay, Schouten Island. Beautiful spot, the rouge red granite mountains surrounded by an azure sea is very special feature of the Freycinet National Park. 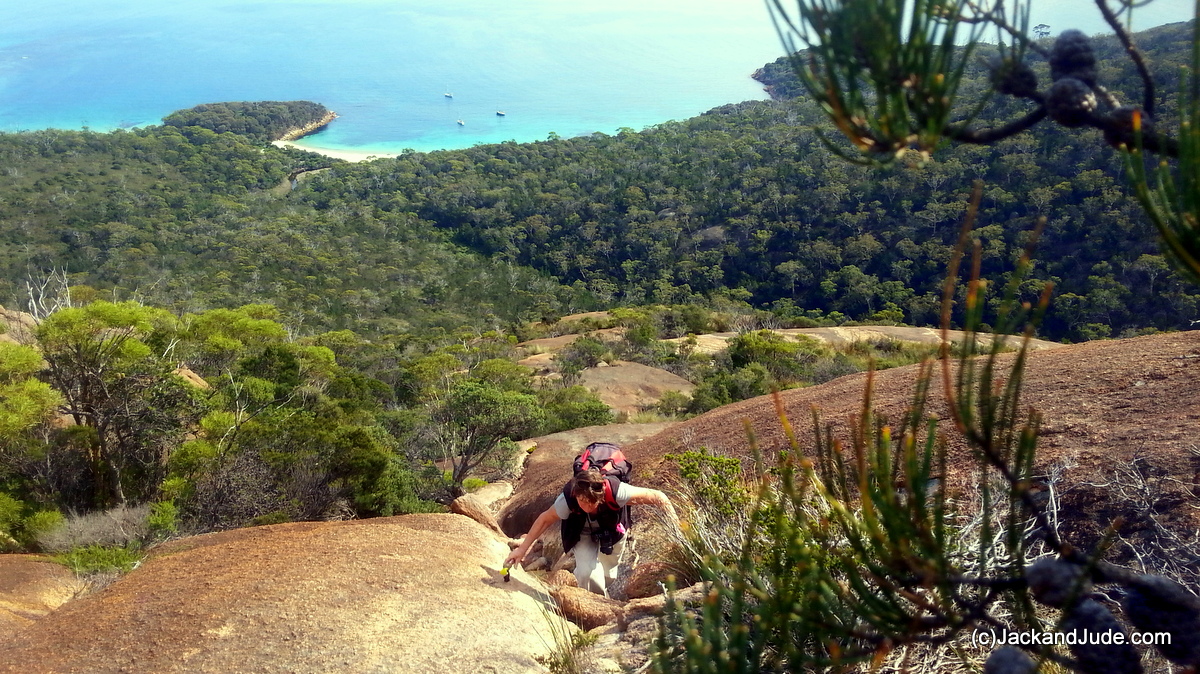 Col and Dini on Free Spirit caught up with the next day, and after a quick jaunt up Bear Mountain, we set sail on an overnight passage to the Furneaux Group that borders Bass Strait at the Northeast tip of Tasmania. Except we had a problem. Early on the voyage our prop grabbed a huge clump of kelp (vid) and wouldn’t let it go. Our engine nearly quit, and sailing while dragging such a mass took away a lot of speed. So we only got to Swan Island at the start of Banks Strait when the notorious tide turned against us. Oh well, we found a nice nook in the tiny bay at Swan, avoiding the submerged rock dead centre, and then Jude jumped in to cut away the mess. After that, we had the rest of the day exploring the uninhabited island that has the oldest lighthouse in Bass Strait, dating back to 1845. 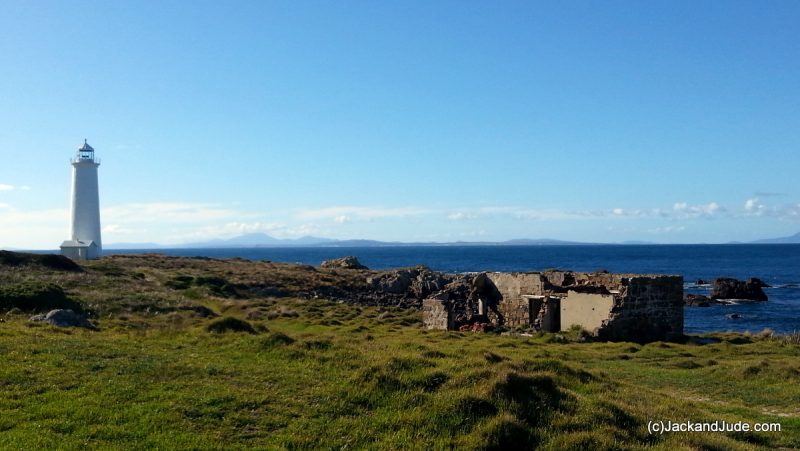 Trouble was, next morning the wind found its legs and it came in big time. West winds 25 knots, gusting 35, smacked against a tidal stream running our way at well above 3 knots made the waves really stand up. On our short fast sail to Preservation Island, partly submerged at times, saw a lot of water come over our rails. And while below was fine, on deck we lost a few things. Our advice – take extreme care when crossing Banks Strait. 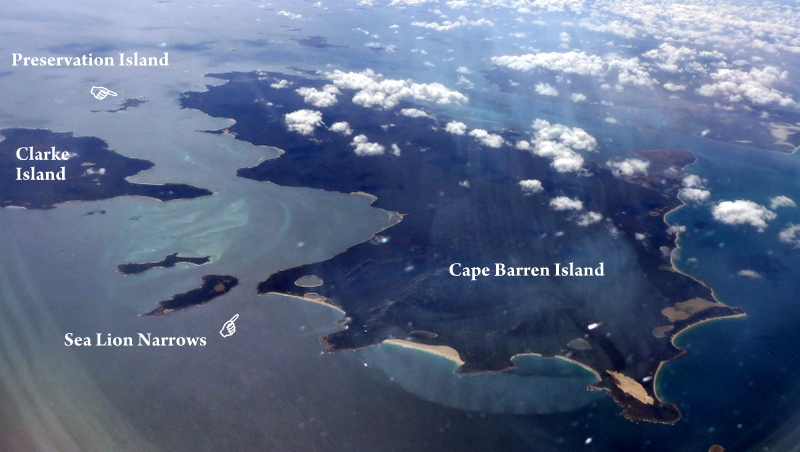 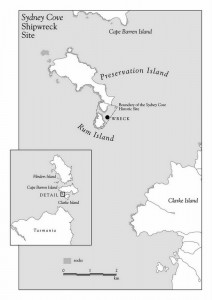 Pocket-sized Preservation Island is little known even though it’s the scene of Australia’s greatest early drama. If I mention Rum Island, some may have an idea, but to explain, in 1797 the ship Sydney Cove, loaded with mostly rum, wines and beer, as well as China ware and food, was purposely run aground at the southern end of this island to save her crew and cargo from sinking. This sparked the first ever open boat journey across Bass Strait, which in those days was thought to be a large bay, and then they undertook a two month 600 km trek through country never before seen by white man. Meanwhile, thirty of the crew waited here on Preservation to be rescued.

Preservation is typical of the Furneaux Group with massive granite tors sprouting boldly out a treeless terrain against a cobalt blue sea. It’s very impressive. We have written a script and are ready to tell the story, but the weather won’t co-operate. It’s cloudy with some light rain, not at all suited to do the countryside justice. Strong winds are coming, adding to our woes, but maybe also offering salvation by blowing away this grey mass above us. Also frustrating, the phone and internet comes and goes as fast as the Cape Barron Geese flying overhead. 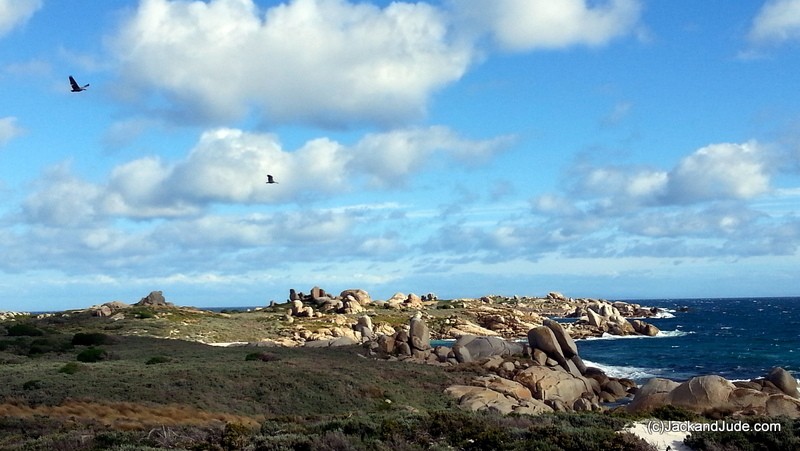 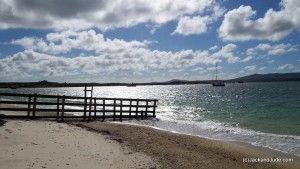 We waited nearly a week while strong westerlies brought showery weather unsuitable for shooting our scenes. They didn’t stop us from getting off the boat each day for a wander round the island. In the meanwhile, life afloat went on, me editing video back aft, Jude writing and cooking scrumptious meals up forward.

Then we got our break – windy but clear and off we walked down island to the Sydney Cove wreck site. We’d written a script telling the whole amazing story and had our scenes set out, but shooting them didn’t go quite to plan. We’re a two person film crew doing everything, which includes running the cameras and sound, as well being the actors. So sometimes we muck up. Jude isn’t quite up to David Attenborough’s standard yet, and sometimes has a little trouble delivering her lines. What would help is a giant sized cue board. Nevertheless we have fun, helped by the glorious scenery and the fact that we were standing on the very spot  of early Australian history.

Right after the shoot, the weather went foul with a windy cold front approaching, so we shifted over to the southern shores of Cape Barren Island to hide from the strong northerlies preceding it. Wrong move Charlie. At first it was grand to be in a new location, but at midnight when the strong winds hit we dragged anchor across a weedy bottom. Buffeted this way then that sleep seemed an unobtainable dream, until we both fell into a stupor – only to awake a quarter mile further downwind! Good thing we awoke not against rocks, but in the middle of the bay. 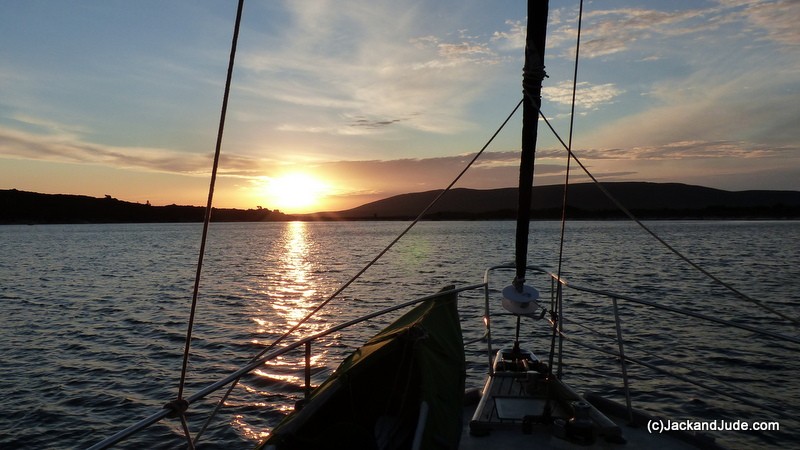 It blew savagely all that next day. Too windy to find shelter elsewhere while we watched the wind shift until those big nasty shore rocks loomed astern. What a pickle. Darkness coming and no where to hide. So we set an anchor watch, Jude first to bed. To block out the screeching wind, I put on headphones and watched a film, checking the GPS every time a big gust slammed us. By midnight the front was easing, the steady winds lasting longer, the blasts less frequent. 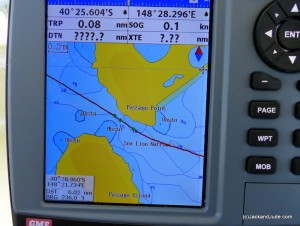 Sailing in these latitudes we have to deal with the hard times to enjoy the really good ones, and next day we reaped our reward. Cloudless, clear, calm, with mountains all around we raised all sail to wander effortlessly East, towards a demon that had truly frightened Jude a few years earlier. In another of my miscalculations, when trying to escape another bad blow I’d directed us towards a narrow pass known for its fast currents. Sea Lion Passage is not to be taken lightly we learned that day. Rushing current with us, strong winds against us set up waves that washed over the boat. I got thrills, Jude lost years. And when I told her the morning after this latest blow that we were again taking on Sea Lion Passage, I had to talk fast to avert a mutiny. “Have to face your demons, dear,” I said while raising the anchor. 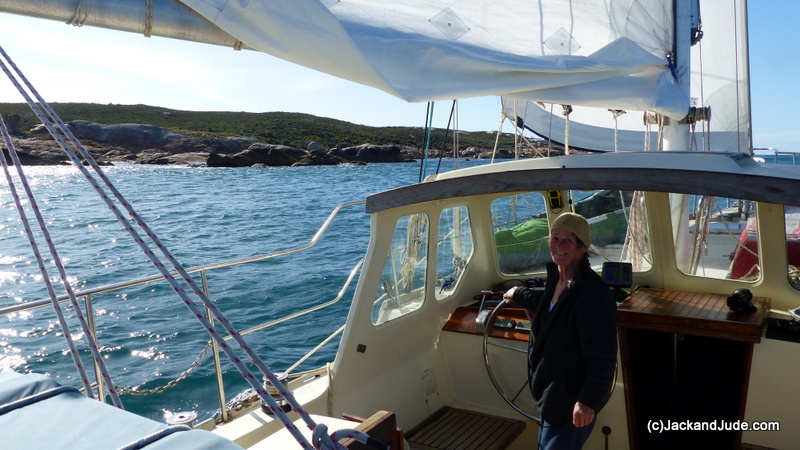 In a nutshell, it was glorious. Every yachtsman’s dream. Jude manning the helm, conning our ship through the whirlpools, loving every second and wanting more. We anchored in Jamison Bay under sail, tucked close in under a rocky point to avoid the southerly swell. But it frightened me thinking of the dark night ahead, so we raised anchor in a sail away start. More good fun. Around the far point, on Cape Barron’s east coast we found a tolerable spot in Burgess Bay. Good clean sand, little swell. It must have looked good as two other yachts suddenly appeared and came in beside us.

From there over the Pot Boil Shoals to the port of Lady Baron was a motor. And here we are. On a mooring and away off the good ship Banyandah for a walkabout on this wonderful island guarding Bass Strait. 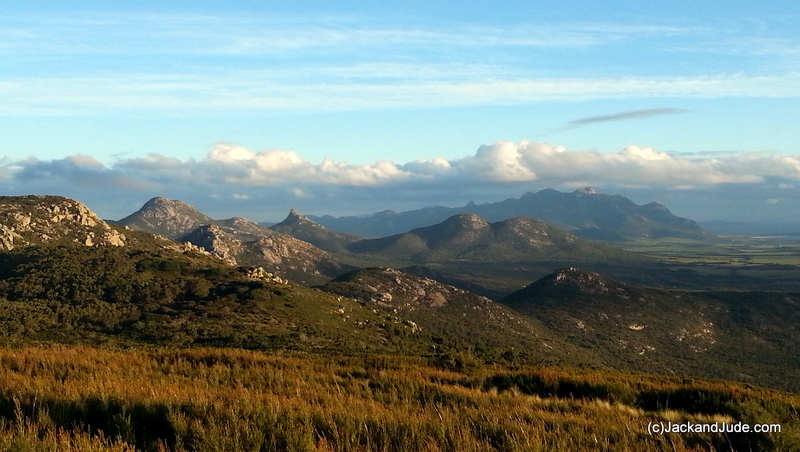 Some wonderful friends have loaned us a car, and their shack out in the bush to use as a base. Good, we can use a bit of time off duty, and it’s given us time to decide where to from here. 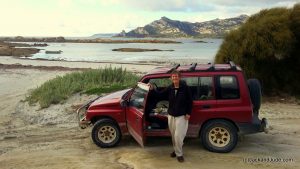 Once our holiday in the cabin had come to a reluctant, self-imposed end, we dragged our heels on the drive back to Banyandah by finding little diversions. Nevertheless, by the end of our seventh day away, we were afloat again. We’d both suffered mild cases of burnout when coming up the coast from Hobart, and that had been exacerbated by the Furneaux Group’s challenging weather, tides, and currents, in addition to its insecure anchorages with poor holding. It was the coming of yet another storm that had us take up a MAST free mooring and grab the proffered car keys from Marcia, along with Goss’ cabin keys he so kindly offered. Together they formed our ticket to a relaxing break away from worry. Thanks so much to them, we returned filled with memories of beautiful scenery, amazing wildlife, and lovely interesting chats with the locals and other visitors. Another outcome was that our path ahead had become clear. 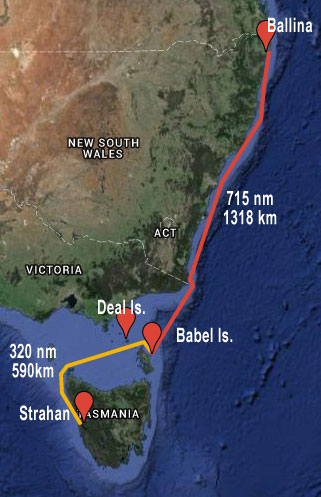 Till Next time – Wishing you fair winds and safe anchorages.