Desperately seeking MOBILERT Pods
The Things We Do 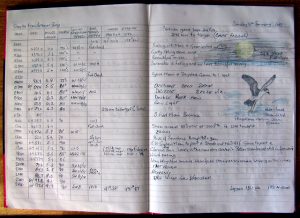 Our logbook created from lined A4 hardbound books from newsagents

Jack and Jude sail across oceans alone, just the two of us, and over the years, our way of keeping watch has evolved. In the beginning I found it hard to shut off and short watches meant little or no sleep. So we made the night watches longer, and longer, until we split the night right in two, time enough for long good sleeps most of the time. First nights out are the hardest. Also a great challenge, rocky rolly downwind sailing. Jude grew up working long hours as a nurse, and sleeps soundly most of the time, but not on gusty blustery nights that keep us both awake, listening, hanging on, ready for action. During those years crossing oceans with our children, we split the long nights in two –  changing watch after recording the midnight stats, after which Jude takes over till dawn. That’s usually about the time I get up. A cuddle and a few words sends my sailing partner back hot bed for two or three hours of catch up sleep. 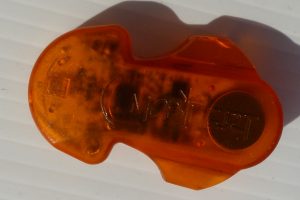 Problem –
All minimum crewed ships share the same dangers of the watch-keeper falling overboard while the other/s are asleep, and in 2009 we found a great device that would sound a klaxon horn if this event should happen. It’s called MOBILERT, and it also logs the exact GPS position so that locally the crew would be awoken and can take immediate rescue action. It seemed a better approach then the person in the water setting off a PLB and waiting for what could be hours. Why not both? Feeling safe is important when surrounded by ocean. 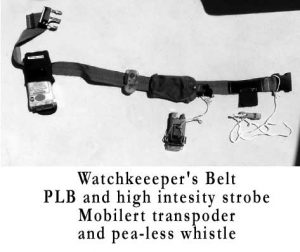 Our watch keeper wears a belt with a PLB and high intensity strobe as well as a pea-less whistle. It also holds a MOBILERT pod that maintains a link to a console, which if that link is broken by distance or immersion, sets the klaxon blaring and logs a MOB event with GPS position. 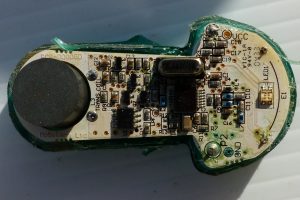 Our problem is the Mobilert pods have run out of puff – meaning the batteries inside are kaput and will not charge anymore. One by one they died, until, on our last voyage from Tasmania to north coast NSW, we were down to only one that sometimes worked, and sometimes did not. We contacted the company, but they discontinued making that product yonks ago and had nil stock of pods. We contacted dealers around the world with the same result – no pods. So, this time home, with the help of sailing friends who found replacement batteries, with a steady hand I cut a waterproof pod in half . 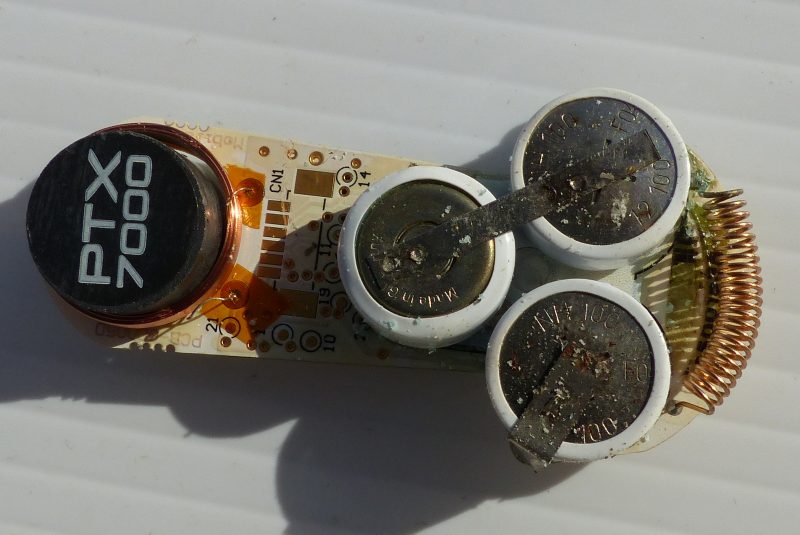 Inside I found that the batteries had leaked a bit – one rather severely so I cut open another which looked a bit better. He diligently cleaned the PCB, which are filled with tiny components and then solder in the replacement batteries. Whacko! The tiny LED began to blink once again!

But, alas, our success was short lived.

The resurrected pods started playing up within a day or two, refusing to shut off when commanded by the console or just they wouldn’t turn on when told to do so by the unit. So our problem is, we have the complete MOBILERT system installed, a very time consuming and expensive task, but no pods. Yes there are other systems available now, but before we part with anymore $ and go through the whole installation process again, we’d be blessed if any of you reading this have a few MOBILERT pods that you’d like to sell.

Episode 69 of The Sailing Podcast is with Michael, Liss, Andy and Holly of Sail Surf Roam.
David and Carina join the crew of SV Roam for an afternoon on the Noosa River.

Roam is a home-built Spirited 480 design by Craig Schionning and was built by Michael Hoult and his family on the East Coast of Tasmania. Michael contacted the Sailing Podcast from Bundaberg, having just checked back into Australia after sailing to Fiji to surf the famous Cloudbreak surf break. They sailed overnight to get to Noosa and picked David and Carina up in the dinghy and took them out to check out Roam. They spent a pleasant Sunday afternoon with the gang and found an inspiring group of people who are living the dream after putting in many years of hard work to achieve it.

Jack and Jude get excited by places with great stories,
And in 2016, we filmed two.

Forty thousand years! An incredible time for the southernmost people to have lived in harmony with Earth and we bring their story to the wide screen by exploring their remote homeland near the SW tip of Tasmania.

At the other end of Tasmania, in 1797, a voyage to a hungry new colony results in shipwreck on the the wildly scenic Preservation Island next to mysterious Rum Island in the Furneaux Group. Explore these isles for remains and listen to their fascinating story with Jack and Jude. 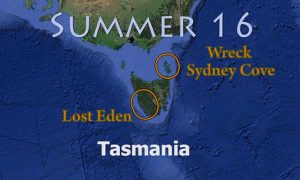 And –
We continue tagging the historic Goulds Track that once linked the developed East Coast to the untamed mineral rich west. And a snippet of finding Carvers Boatyard at Port Davey, last in action 1894.

MEGAPULSE UPDATED
Three weeks after installing Megapulse on our primary battery bank, we lifted its lid and measured the batteries with a hydrometer. The results were very pleasing. All cells were out of the mid range and well into the green zone, showing an improved reading of 1280.

We are suckers when it comes to electronic stuff, love our ham radio, had one of the first portable computers, lost a lot of shekels supporting new technology. We’ll cast a critical eye over any product that makes our job easier and more productive reliably, and is affordable. Enter “Megapulse” a small handy device that restores sulpated lead acid batteries, the number one killer of the batteries on Banyandah. Pre-install tests revealed this bank of three batteries is nearing end of life so it will be enlightening to witness what happens now that the Megapulse is connected.