Blog of Jack and Jude

“Hey babe, let’s do that kayak trip we planned,” I said reaching across the bed, giving Jude’s toes a tweak. “The four day forecast is looking good, a high’s coming right over Tasmania.” Sleep slow she moved across our bed and put her head in my lap then squinted up at our netbook. Stroking her hair, I continued my thoughts. “Trev’s got rafter pickups back to back, so he’ll be out of town and Megs will be flat out with her units full. Storm Bay and The Jane are going up river, so there’s nothing going on here and with Banyandah tied alongside the Wilson Pride, she’s perfectly safe.

Stretching slowly under the covers, Jude purred then simply asked, “How many days?”

“Let’s see – A day to Teepookana followed next morning by a walk to the plateau and forestry lookout, then a paddle up to the Quarter Mile Bridge. And I’d love to try reaching the gorge. Say four days, three nights. Megs might be able to drive us over to the river mouth tomorrow early. What’d you say?”

Throwing back the bed clothes, Jude jumped from bed. “Best get going then. I’ve a ton to do.” 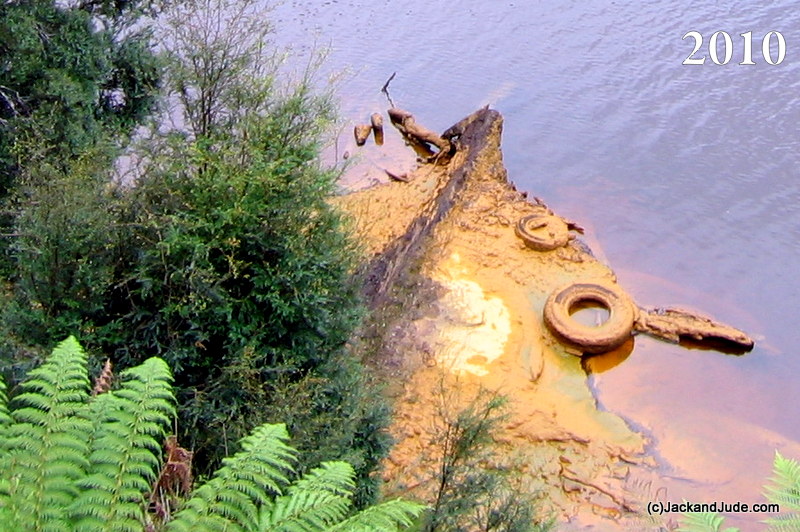 In 2010 we filmed the King River, locally known as the world’s most polluted river thanks to a century of dumping mine tailings, sulphides, and heavy metal into what had been a pristine rainforest river. We captured macabre scenes of glistening yellow slime under lime green baby Huon Pines and silver grey acacias. But since that time the mine has changed hands and new regulations have come into effect, and now we wanted to see if the river had improved.

Local knowledge said the King River dam was releasing winter water to generate power for Victorian factories, and we were told the King sometimes flowed at 3 to 4 knots (6/8 kph). Too fast for us in our double kayak. Therefore I phoned Trev to ask if he had time to drive me over to Lowana for a look. Instead, Trevor said, “I won’t need the car till noon tomorrow,” and came over in his Patrol just before casting off. So as Stormbreaker headed across Risby Cove, I drove around the bay following the rail line and sighted him as he passed Letts Bay, and then again from the launch site at Lowana when Stormbreaker passed the King River mouth as I watched frothy bubbles pass at a leisurely couple of knots. “It’s doable,” I thought and raced back to start making it happen.

Next morning early, with mist still clinging to the forest and water, Megs dropped us off, the Patrol full with our gear and unassembled Green Machine kayak. So much stuff none of us thought it all would fit. A quick hug and group photos sent Megs off to work making beds while Jude and I stood alone hoping we’d not forgotten something hugely important. To Jude’s silent question, I mumbled something like, “I’ll walk back if I have to.” But we hadn’t.

In a mere thirty minutes the Green Machine had taken form, bursting into life on the river mud flats. Another thirty to wiggle and cajole our tent, sleeping bags, kitchen and food into the vacant hull, putting our sleeping mats and water alongside our seats. One last smiling photo sent us on our way upon the cool river with thickly forested slopes before us.

Having not paddled for more than six months we were straightaway out of sync and dribbling cold water off the paddles onto our legs. “Right, Left,” I began to call from the back while Jude alerted me to snags and deadheads. Settling quickly into a routine, the river mouth disappeared, replaced by serene green and silence. 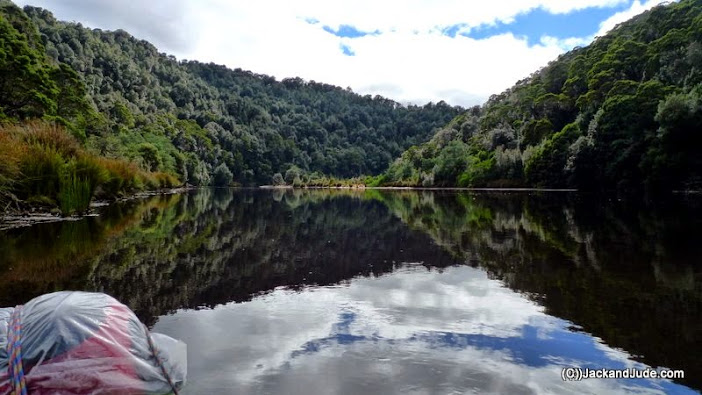 Glorious conditions – not too hot & not too cool 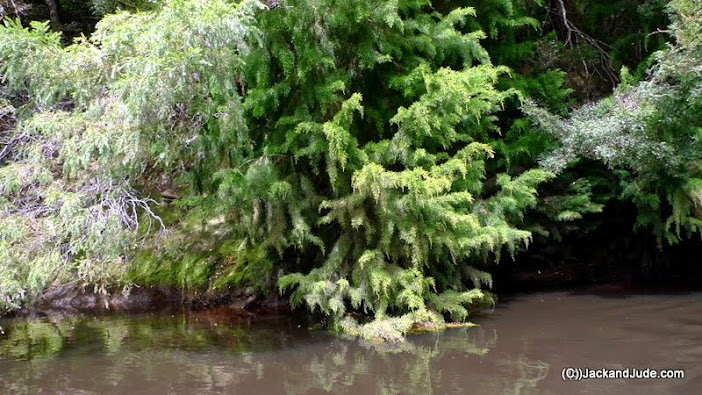 The drooping Huon Pine loves to drag in the water. River quality has improved since our visit in 2010

Once the hard work began, our river knowledge started to return and we found ourselves searching for back eddies and remembering to take the inside of bends and track up the whirls off sunken logs. As the forest grew thicker, drooping Huon Pines seemed to pop up everywhere, their needles dragging in the current.

It was nearly seven kilometres upstream to The Iron Bridge, where we had camped in 2010. I had recorded its GPS position on a map I’d prepared and could track our progress that morning. Halfway and weary with sore hands and aching shoulders we took a fairly long break on a sand spit that jutted out. Jude got out her sketch pad so I pushed through the shore bush and found easy walking flats under the forest of myrtles. Amazed by the collage made by its small fallen leaves, pure bliss set my soul free to soar like a wild creature, my fatigue soon forgotten. 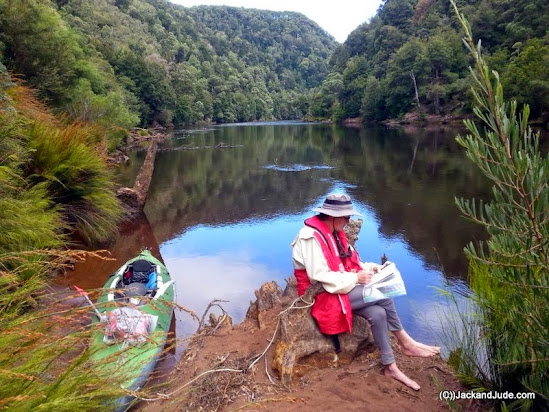 Further up where the river narrowed we had to heave even harder on the paddles and suddenly something let go in my left hand. Every stroke brought intense pain and the fun turned to worry. I stroked hard with my right, but could only return the paddle with my left and Jude had to make up for our loss.  [MORE]

Ever since the first Wooden Boat Festival was held in Hobart in 1994, Jude and I have dreamt of attending. Where else would we see hundreds of classic and historical timber vessels gathered in a city renowned for its natural beauty and deep connection with Australia’s past. Inspired by delivering the 76 foot timber cutter Nam Sang to Coffs Harbour from NZ, our visiting the festival remained an elusive dream while we worked long hours, often seven days a week, to establish ourselves after a youth sailing around the world on a bag of rice and an ever handy fishing rig. 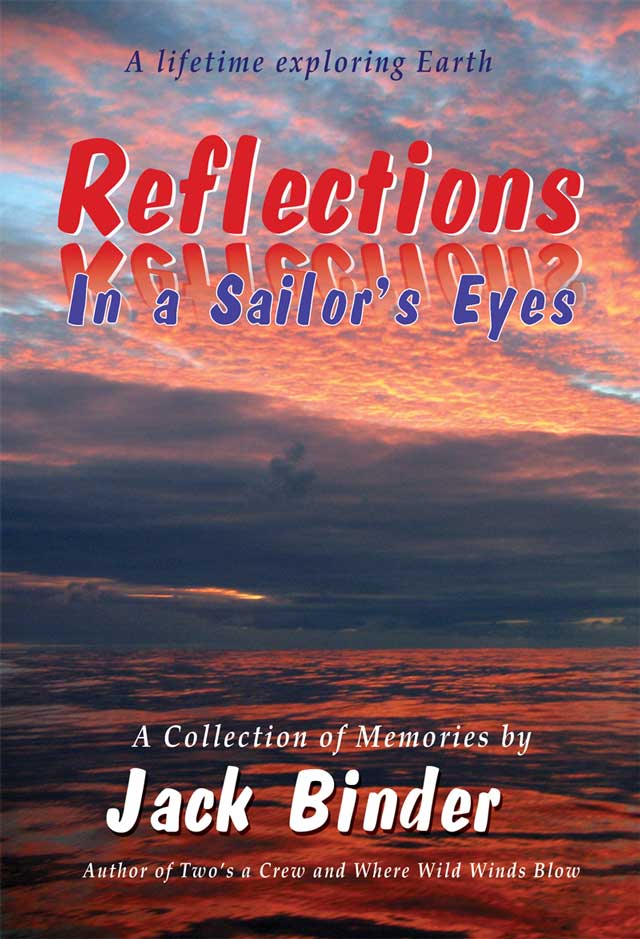 Then last year in the hazy lazy hours just before dawn my mind saw a vision. The night before I had written the final sentence of Reflections, a new book dedicated to our many grandchildren. Reflections was written to not only rekindle long ago memories in our sons, now fully grown and busy with the responsibilities of raising large families, but equally important, as a legacy for all little ones to show that there is adventure and wonder waiting.

In my dream, the book’s completion saw Jack and Jude at Hobart’s Wooden Boat Festival surrounded by like minded soul mates, offering our volume of stories, hoping to encourage them and their young ones in their quest. For we are just ordinary folk inspired by others who have fulfilled many a dream.

To make this new dream a reality we had to battle high seas to Tasmania from Adelaide where our dearly loved veteran had wintered. Unseasonal storms had forced several other vessels to turn back as we attempted the last leg from Portland to Hells Gates in near gale conditions. With aging bodies rather out of touch after a six month break we took up the challenge to brave the heavy conditions with our usual caution and good preparations. Then, hey presto! Reaching the green mountains of Tasmania magic happened. As if carried south aboard the good ship Banyandah, the long awaited summer arrived.

Hobart shone under brilliant sunshine blasting down from a faultless blue sky. Buntings flew gaily in the warm sea breeze as hundreds of sailing vessels paraded in unparalleled pageantry upon the Derwent, dazzling the crowd that would number more than two hundred thousand.

A collage of colours blazed around the enclosed Constitution Dock where the colony’s first stores were landed more than two hundred years ago. Just outside, every finger of Kings Pier displayed medium sized timber vessels with even more bunting flying, fascinating the huge throng of people strolling the docks snapping photographs and engaging with boat owners. Information was exchanged. Stories were told. History revealed. Dreams created. 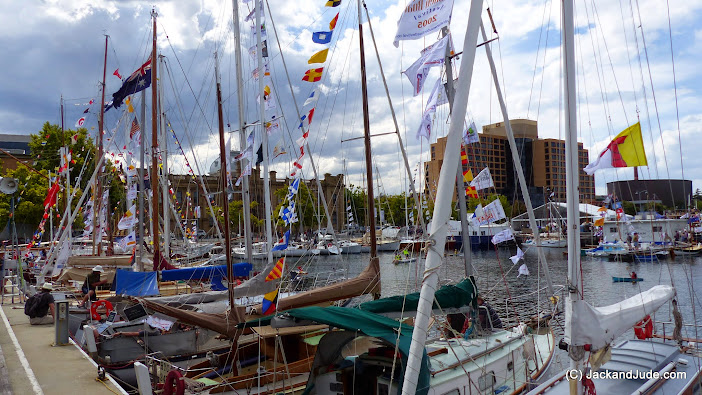 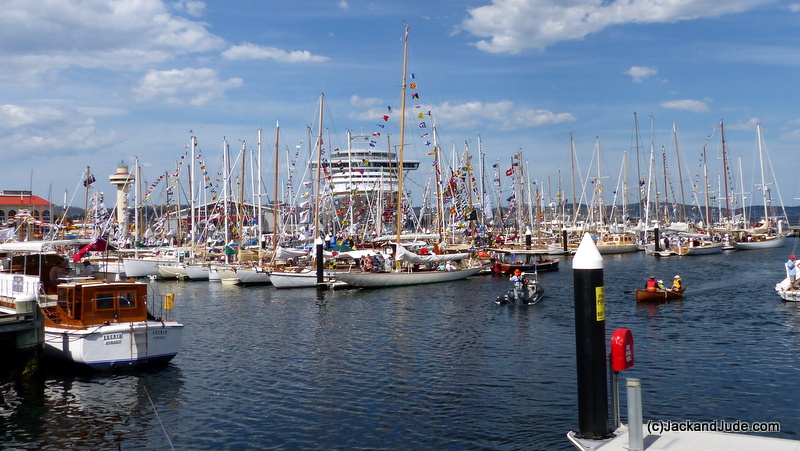