A few of the wonderful comments we received –
“Hi Jack, you have done an excellent job of your guides,” from Ian.
“I’ve sailed here for nearly six decades and still find your guide delightful and informative,” from Christian.
“Greatly useful,” from David.
“Fantastic book – cannot thank you enough for all the valuable info you have put together.” from Michael.

To receive such nice words of appreciation makes our efforts very much worthwhile. Thank you. 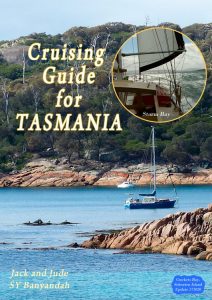 The popular electronic Cruising Guide for Tasmania has just gotten even better with the release of our latest update.

Free update for all Tasmanian guide holders.
Interested guide holders should send an email with name and/or transaction number, and then starting on the October 30th, an active download link will be sent out.

Just imagine, by joining Wildcare for an easy $25, you could have a unique, fun experience exploring this world famous location with a group of experienced locals while at the same time help sustain the World Heritage wonders of western Tasmania. This new group is assisting Parks and Wildlife by maintaining some of the walking tracks, while larger tasks such as the rebuilding of the hut at Sir John Falls and other projects are being planned.

The first is an open, easy track with fabulous views connecting the Harbour to the wild west coast, a perfect day’s outing from Betsys Bay. The group will be ferried down harbour from Strahan to Betsys Bay, where camp will be setup at an existing site. Depending on weather, clearing the thickened bush and re-tagging the track, along with collecting trash should take no more than three days in January, at a time yet to be determined.

The group’s second task is more challenging. In 1842, a track was cut to take Governor Sir John and Lady Jane Franklin from Hobart to the west coast so that they could better judge the difficulties, dangers, and potential natural wealth of the west. This track came out on the Gordon River at Eagle Creek and the section joining the Gordon and Franklin Rivers was still in use by walkers and rafting parties circa 1990. But when those trips ceased, the thick rainforest reclaimed the track. Our group has worked with great gusto and a fair bit of determination these last few summers to re-find and clear this 10 km track that traverses an amazing land. But a few wet, windy winters have made the middle section a bit of a mess, and therefore this summer we plan on sending in two or three working groups to clear and make safe this track that passes through some of the area’s most exquisite wet forests. Transport from Strahan will be provided. Applicants will need to be bush savvy, fit, and have suitable camping gear. The actual itineraries have not yet been published. Interested people can contact the Secretary, Jack Binder for further information.


New Facilities at Triabunna
42°30.612’S ~ 147°54.9’E
Charts AUS 170 & 175
Triabunna is a relaxing fishing village surrounding the sheltered harbour of Spring Bay. The town has a range of shopping facilities and is the base for many crayfish and fishing boats. The Maria Island ferry departs from Triabunna. Visitor Centre in Charles Street, Phone (03) 6257 4772 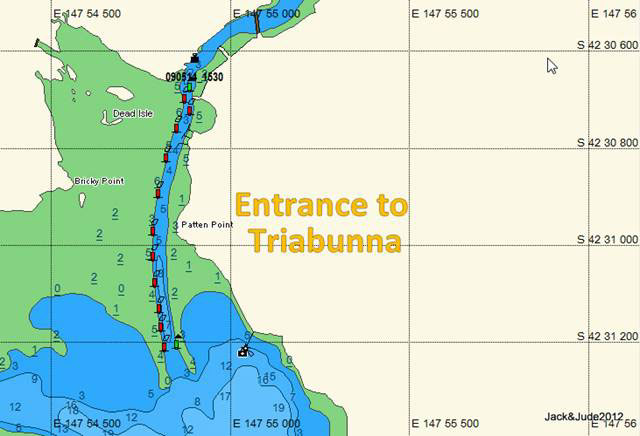 Settled in the 1820s, Triabunna has traditionally been a centre for small industries. Some blossomed then died out like: whaling stations, sandstone quarries, tramways, military garrison, and the southern hemisphere’s largest apple orchard. The woodchip plant closed in 2012.

Berths: Alongside the newly extended town jetty costs $35/ day, $125 week, including town water and power, diesel available on the jetty. Triabunna also has new floating marinas. All the berths are taken bar 2 x 10 m berths but Harbour Master Gary Laredo 0422808166 manages to accommodate all visitors.
Showers:
There is a visitor’s information centre near the marina that has showers paid by coins.
Boat Ramp:
The port also has a four lane public boat ramp with car & trailer parking.

At Last! – Light at end of dark tunnel
BHP considering leaving Minerals Council over group’s climate policies
The truth about soaring power prices: Why wind and solar are not to blame
[Read More]

Our time back in the shack has been busy busy busy in this winter’s unseasonable heat that has been harsher due to receiving only a few drops of rain. Meanwhile, down south where Banyandah safely swings round her mooring, the skies have rarely been clear of black clouds raining heaps. It’s as if an imaginary line has been drawn, cold and wet one side, hot and dry the other. 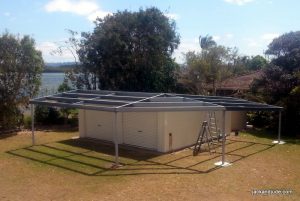 With our vessel safe miles away, we’ve turned to house maintenance and family fun to fill the time till winter’s chill abates down south. One major task underway is completing our shed’s awning, a steel structure wrapping around the two sides facing the house. It would have been completed long ago if we hadn’t noticed a tiny bit of corrosion taking hold where the colorbond flashing screws up to the underside of the front support channel. Being alongside a tidal salt water river, this prompted us to remove the roofing to prepare the exposed structure for corrosion protecting coatings – as if erecting the structure wasn’t enough! Oh well, another week in the increasing heat should see us with a lovely addition that will last forever (LOL) 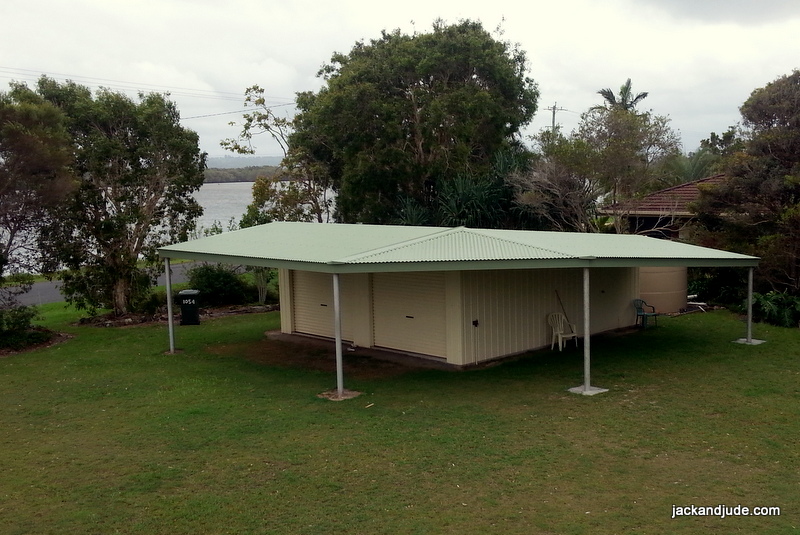 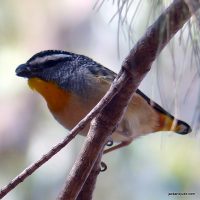 We have also taken our new secondhand vehicle out for few jaunts to test its off road ability and can report that these Suziki Grand Vitara are not a soft SUV, but are rather stiff, capable offtrack performers. Put her in low range 4WD and she’ll climb straight up the worst mountains, opening up access to lots of new wilderness areas. Come the school holidays at the end of this month, we’ll be taking three of our grandkids deep into the Nymbodia National Park to camp right alongside the river. Can’t wait! 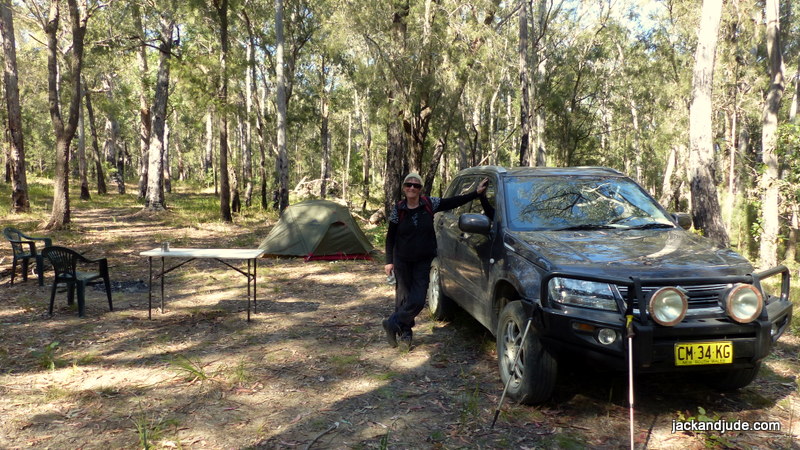 Jude calls her “Chipmunk” because she’s quirky, jumps about, and can climb just about anything 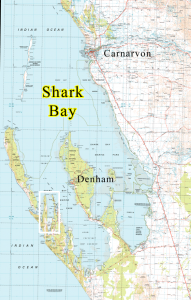 Useless Inlet in Shark Bay WA isn’t really useless if you can navigate the shoals into its large enclosed bay that’s alive with good fishing and quiet hideaways. Mind, fierce southerly winds can join up with a fast outgoing tide to slow your passage down the 12 nm long inlet. Charted as Harve Inutile (Unusable Harbour) by Louis De Freycinet in 1801 due to the shallow sand banks obstructing the entrance, it later became the center of the pearling industry in the 1870s. Beginning in the 1960’s, causeways were constructed across the southern reaches to trap and concentrate saltwater for the solar salt ponds located across the peninsula at Useless Loop.

To help you through the sand banks, here are a set of waypoints that will allow keel boats to access this out of the way inlet. 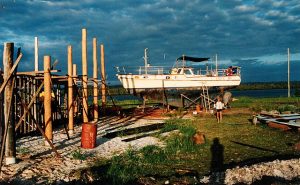 After 16 years of service around the world, Banyandah leaves the water in 1989

It’s been outdoors weather lately and with little “Life Afloat” news to report, we’ve sort of neglected this website. To make amends, as time allows, we have started uploading newsletters created a decade ago that we posted on a website that’s now defunct. Covering our first few years back afloat, the first installment is a photo journal showing the rebuilding of Banyandah during her 16 years sojourn on dry land. Just imagine the wear and tear our homemade craft endured as we raised our family afloat while sailing to over eighty countries around the world.
Rebuilding Banyandah can be found here. 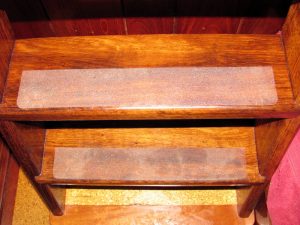 Instead of non-skid tape, these treads have been sanded. Sand is more durable than anti-skid tape which tends to wear unevenly and look scruffy in highly trafficked areas. Also, unlike anti-skid tape that sometimes lifts at the edges, there’s no chance of that happening when using sand. Read how to do it HERE. Or get a PDF copy of her informative book for less than a cappuccino. Paperback available as well.


Our DVD Videos on USB Memory Stick
Last summer, while away in the wilderness, I was thinking of my video workstation back at the shack and planning to re-engineer our earlier videos into widescreen high resolution files that could be loaded onto a memory stick.

Extras on stick – 11 hours of viewing
Putting our DVD Videos on a USB Memory stick has given us an opportunity to also give out a slew of extras – like the drone footage of remote locations we filmed this year, along with a peek at places filmed over the years like WA King George River and Daw Island on the edge of the Bight. A complete list of files can be found here.