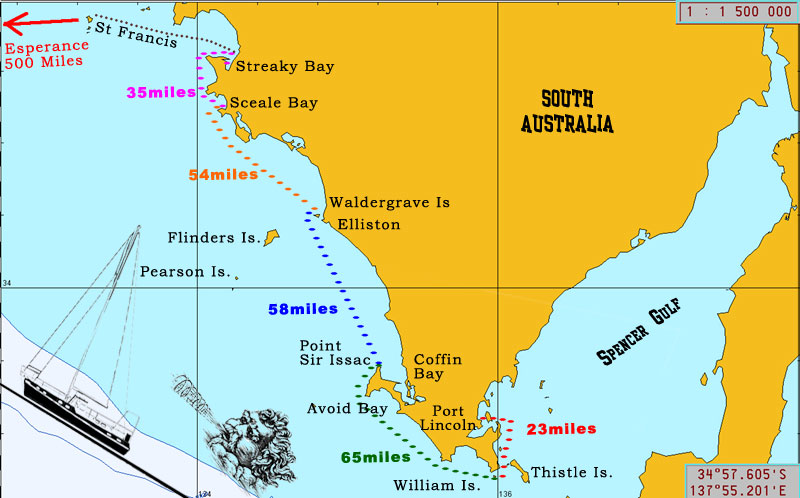 The first uncontested landing in Australia by Europeans was by Dutchman Willem Janszoon, captain of the Duyfken, who landed on Australia’s north coast in 1606. But the continent’s south coast remained a mystery until 26 June 1627, when Captain Francois Thyssen aboard the Gulden Zeepaert (Golden Seahorse), with Peter Nuyts, Councillor of the Indies, became the first Europeans to see Australia’s southern seaboard. Why they came to be so far East is a mystery. Perhaps a serious navigational error or bad weather had blown them off-course. Nevertheless the ship charted the southern coast from Cape Leeuwin, discovered by the Dutch ship Leeuwin five years earlier, all the way to present-day Fowlers Bay and beyond to two islands they named, St Francis and St Pieter. The region they named Nuyt’s Land. No one really knows what happened after that. Some believe they retraced their route and sailed up the west coast to Java. Others believe they kept sailing east in the hope they would see the coastline turn northward.

Nearly two hundred later, the first known vessel to sink in South Australian waters was the cutter from Matthew Flinders’ Investigator in 1802. Eight men were lost, and Flinders named the headland Cape Catastrophe, and the straits he named Thorny Passage. Just south of Thorny Passage with its violent tide rips, but still in sight of Cape Catastrophe lies Williams Island exposed to the great southern ocean. 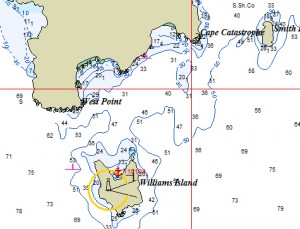 
Shelter from SE through S to SW in 10 m sand and weed, medium holding.
We sheltered from 20/30 knots of SE. A bit rocky-rolly but comfortable for us. Numerous seal lions. Easy entry. A lighthouse exists on Williams Island.

Avoid Bay
34°40.10′ S ~ 135°20.20′ E
Shelter from NE through S to SSW
Banyandah did not stop in this recognized anchorage when en-route to/from Coffin Bay. The anchorage is situated behind a reef that provides good shelter although we hear the swell can lick around the end making it a little uncomfortable. Plenty of rock in the area, so be sure of your position, night entry not recommended.

Coffin Bay
Shelter from all directions
Coffin Bay, Port Douglas, Mt Dutton Bay and Kellidie Bay form one of the most attractive cruising areas in South Australia. Its entire southern coast is national park; its waters are sheltered, its fishing good and essential supplies are available. Jack and Jude travelled there by road before sailing Banyandah west from Port Lincoln.
We discovered that only vessels with a draught of less than 1.5 metres are able to pass over the bar into the town anchorage. Deeper vessels need to work the tides or stay outside in Coffin Bay. As Banyandah was en-route to WA, we did not motor the 20 miles against the East wind through shallows to the town. Instead we anchored near the entrance to Coffin Bay at Point Sir Issac.

Facilities: The township of Coffin Bay has a service station and two general stores where most basic provisions can be bought, along with the famous Coffin Bay oysters. There is a Post Office and the Caravan Park has laundry facilities. Visitors are welcome at the Coffin Bay Yacht Club which is famous for good low cost meals.
Fuel is available at the main jetty tel 0428 854 020
Water is on tap at the yacht club jetty.
Transport: Port Lincoln is about 45 km away by road. There is a regular bus service between it and the Coffin Bay township. 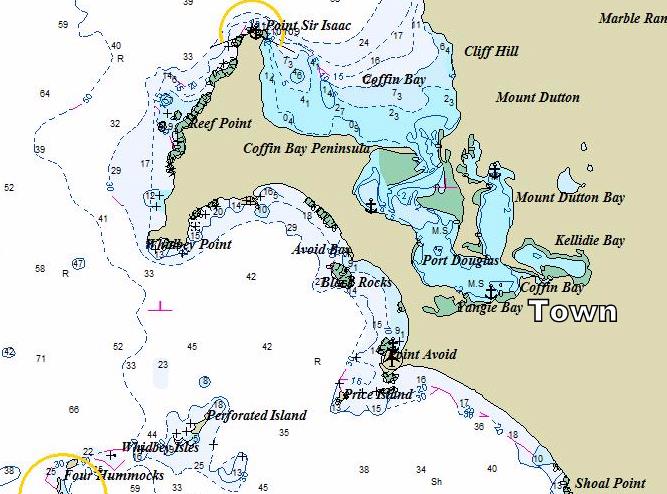 Point Sir Issac
34°25.91’S ~ 135°12.66’E
Shelter from ESE through S to WSW in 5 m sand and some ribbon weed.
We passed a pleasant night in the nook at Point Sir Issac, comfortable in 20 knot easterly winds. Open to the NW. No facilities except a dirt road and launching ramp. 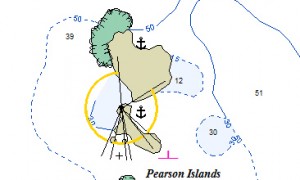 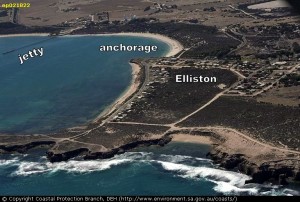 Shelter from all winds, but exposed to SW swell.
Warning: Dangerous entry. Do not attempt without local knowledge and good conditions. Follow leads on jetty, but watch that the outflow doesn’t set you onto rocks.
Best anchorage is in corner near town, sand bottom, although a few smaller boats anchor on the west side. Keep a weather eye open at all times, even in summer.
Facilities: Basic shopping, bakery, Post Office. 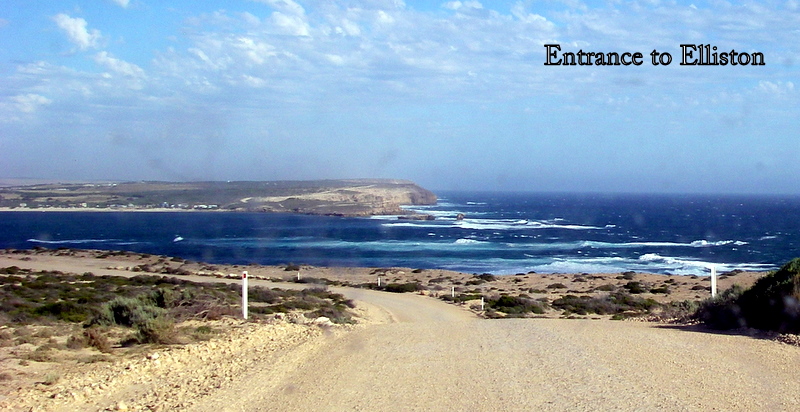 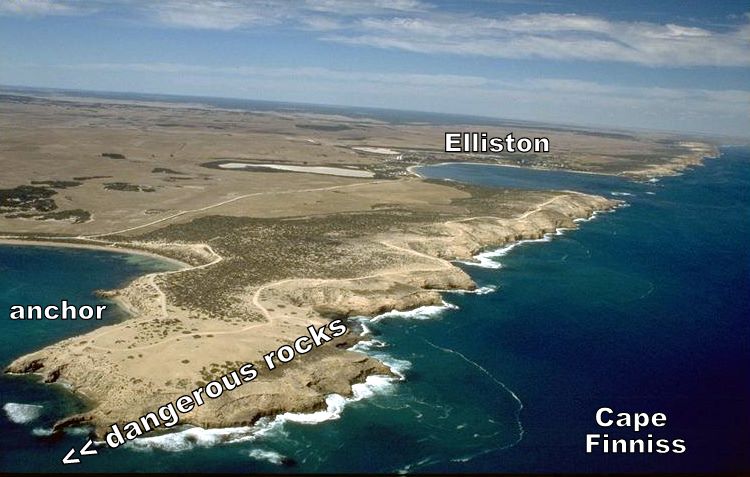 Alternative to Elliston
Waldergrave Island
33°35.55’S ~ 134°48.35’E
Shelter from E through S to SW in 7 m sand with some ribbon weed.
Lovely anchorage. No contact with mainland. Anchor near mussel farm mother-ship.
Enter from outside Little Waldergrave, no passage between the two islands. Locate farm buoys about 1/2 mile north of anchorage and pass inside next to island. 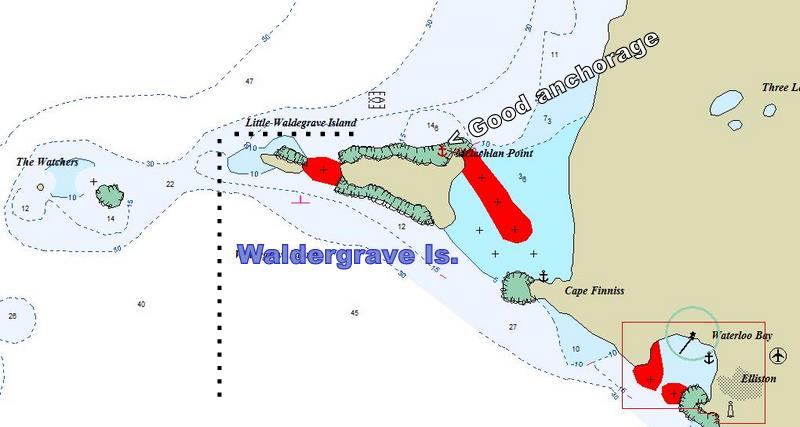 Scale Bay
33°00.72’S ~ 134°11.42’E
Shelter from NE through S to SW in 5 m sand and weed bottom.
Good holding with admiralty even in 30 knot offshore winds. Jetty no longer there, watch out for stray piles in vicinity.
Facilities: None. A few houses. 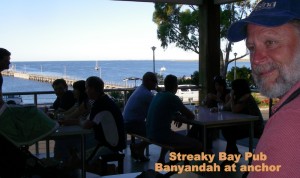 Streaky Bay
32°47.50’S ~ 134°12.72’E
Shelter from all winds.
A grand spot. A landlocked bay with a choice of anchorages. Town close at hand. The run from Point Bauer to Point Gibson is shallow, but a steady bottom, so we followed the contour for our depth.
Facilities: Two supermarkets, a pub on foreshore, fish co-op, mechanic, laundromat, and plenty of history. 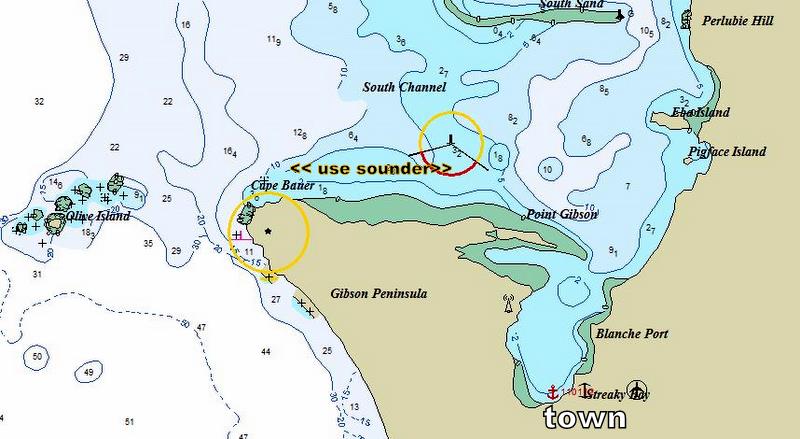 St Francis Island
32°30.10’S ~ 133°17.85’E
Shelter from E through S to W in 6 m sand and ribbon weed.
There’s a lot of history at St Francis, it just hard to see. The first white man to record the southern shores of New Holland was Petre Nuyts aboard the Golden Seahorse who recorded St Francis Island in 1627. This pre-dates Abel Tasman.
On the island, which is totally devoid of trees and chocker-block with mutton bird burrows, are two abandon farmhouses. Take care to reach them. Use the shore route or risk destroying mutton bird habitat and/or breaking your leg. 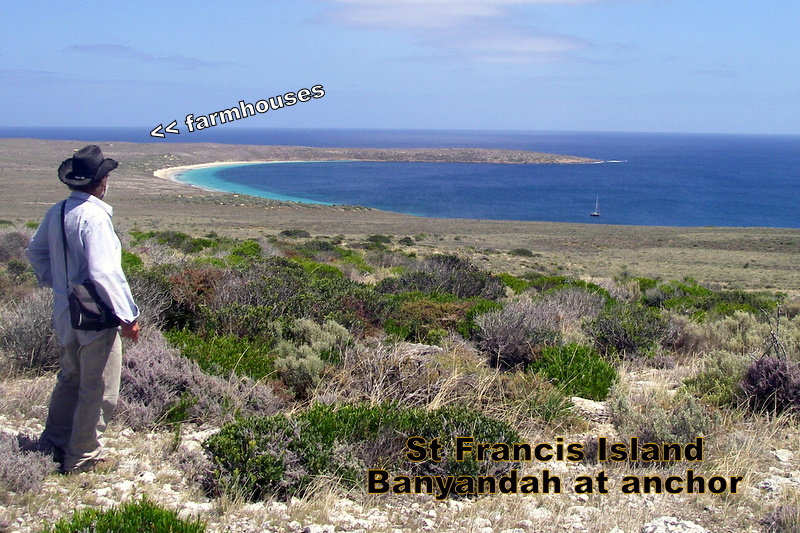 Masillon Island
32°33.76’S ~ 133°16.99’E
Shelter from E to S in 12 m sand bottom with weed patches.
A fisherman in Coffin Bay told us that this was his favourite spot. But our first sight gave us the shivers. A deep and narrow gully facing slightly north of west ends in a cliff face. Spectacular. Surge breaks both sides of the opening, but all is serene up near the cliff, even in 20 knot SE winds. Numerous caves. After one comfortable night, we were away across the Great Australian Bight. Masillon did not plot correctly on our CMAP charts. 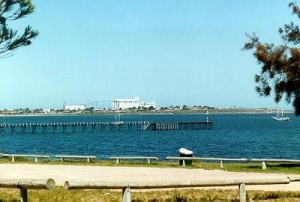 Ceduna
32°07.48’S ~ 133°40.06’E
The most convenient anchorage to the town is just south of the jetty, but do not venture in too close as the area is rather shallow. There is a sailing club open on Wednesday and Friday nights for meals.

Supplies: All kinds from a variety of shops. Mechanical work can be carried out. Diesel is rather a long way from the beach.

Yatala Channel is the passage for large ships using the port of Thevenard near Ceduna. It is well marked with port and starboard light beacons and is easily entered by night or day.

Waterwitch Channel offers smooth sailing in sheltered waters, but it is difficult to locate the nondescript unlit beacons against a generally featureless background. 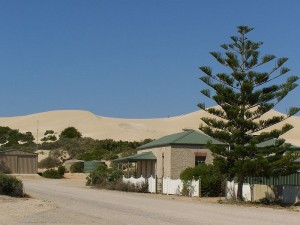 Fowlers Bay is a small coastal town with a population of 125, located approximately 912 kilometres (567 mi) northwest of Adelaide .

Facilities: Few supplies.
Fishing: Great fishing for tommies, squid, snook, garfish and whiting. Dedicated fishers from all over Australia visit Fowlers Bay for the prized Mulloway that can reach up to 30 kg, usually caught during summer season.